Accessibility links
Book Review: 'Disappearance at Devil's Rock,' By Paul Tremblay Things are not what they seem in Paul Tremblay's new novel; a simple search for a missing child becomes a dizzying emotional vortex as ominous new details and old tragedies surface. 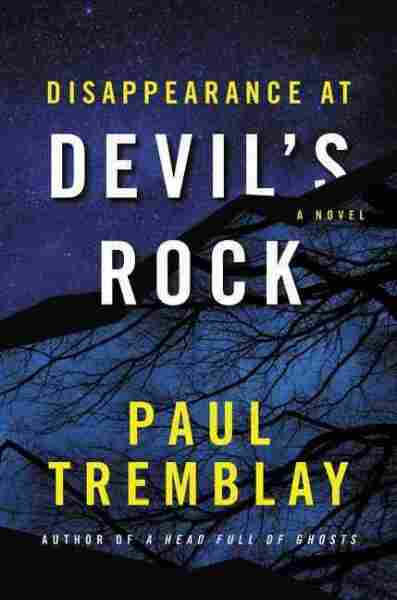 Things are not what they seem: That idea is the building block of thriller and horror novels. Paul Tremblay exploited uncertainty to its utmost in his breakthrough book, last year's Bram Stoker Award-winning A Head Full of Ghosts, in which a teenage girl shows all the telltale signs of demonic possession. Tremblay's agility when it comes to navigating plotlines and peeling away layers of perception helped garner that novel much acclaim – including applause from Stephen King. Disappearance at Devil's Rock is Tremblay's follow-up, and it's even more head-spinning than its predecessor — the kind of book that takes the simple premise of a lost child and twists it into a dizzying emotional vortex.

The child in question is Tommy Sanderson, a thirteen-year-old living with his single mom Elizabeth and sister Kate in the town of Ames, just outside of Boston. When Tommy doesn't come home after a sleepover with his friends Josh and Luis, the search begins in Borderland, a forested area where the boys last saw Tommy. Specifically, they were hanging out at Split Rock, a cleft, glacial boulder with a dead tree sticking out of it, a place the boys have begun referring to as Devil's Rock.

The most powerful aspect of 'Disappearance' ... is its immediacy. Tremblay doesn't shout or gesticulate. He whispers his tale, punctuating it with the "clicks and whirrs" of an air conditioner or the life-mocking ring of a child's bicycle bell.

As the search intensifies, led by the driven detective Allison Murtagh, Elizabeth and Kate begun to shift under the strain. A strange figure starts to appear in the middle of the night, and the emergence of some of Tommy's diary pages — and a particularly disturbing image in them — only complicates the investigation. The long-ago drunk-driving death of Tommy's father William surfaces after the Sandersons thought they were finally over it, and questions fly frantically: What did Tommy's obsession with zombies have to do with his disappearance? How does an obscure folktale about Borderland factor in? And what secrets do the caves, quarries, ponds, and trails of the Borderland hold?

As he does in Ghosts, Tremblay steeps Disappearance in the ominous geography of New England. The maps, interrogation transcripts, and diary pages that Elizabeth and Allison pore over become diagrams of their grief. Tremblay's splicing of texts within texts isn't meta in the way that, say, House of Leaves is — instead, he uses these nested pages to illustrate the distance and confusion our paper trails can leave. That goes for virtual paper as well: Tommy and his friends are avid fans of Snapchat and Minecraft, and their digital imprint, or lack thereof, becomes just as eerie as the crack that winds through Devil's Rock.

The most powerful aspect of Disappearance, though, is its immediacy. Tremblay doesn't shout or gesticulate. He whispers his tale, punctuating it with the "clicks and whirrs" of an air conditioner or the life-mocking ring of a child's bicycle bell. His characters are rendered vividly and sensitively. The ambience is all shadows. "No good news ever calls after midnight," Tremblay writes early in the book; "Nothing good happens in the middle of the night, right?" wonders one particularly cryptic character near the book's end. Not only are these bookends an example of Tremblay's immaculate storytelling, it hammers home the horror at the heart of Disappearance at Devil's Rock: That sometimes we can't truly see the ones we love until they've faded into the dark.