Accessibility links
Report: Partisan Bad Blood Highest In Decades More than half of Republicans and Democrats now have "very unfavorable" views of the opposing party, continuing a trend that's been going on for decades. 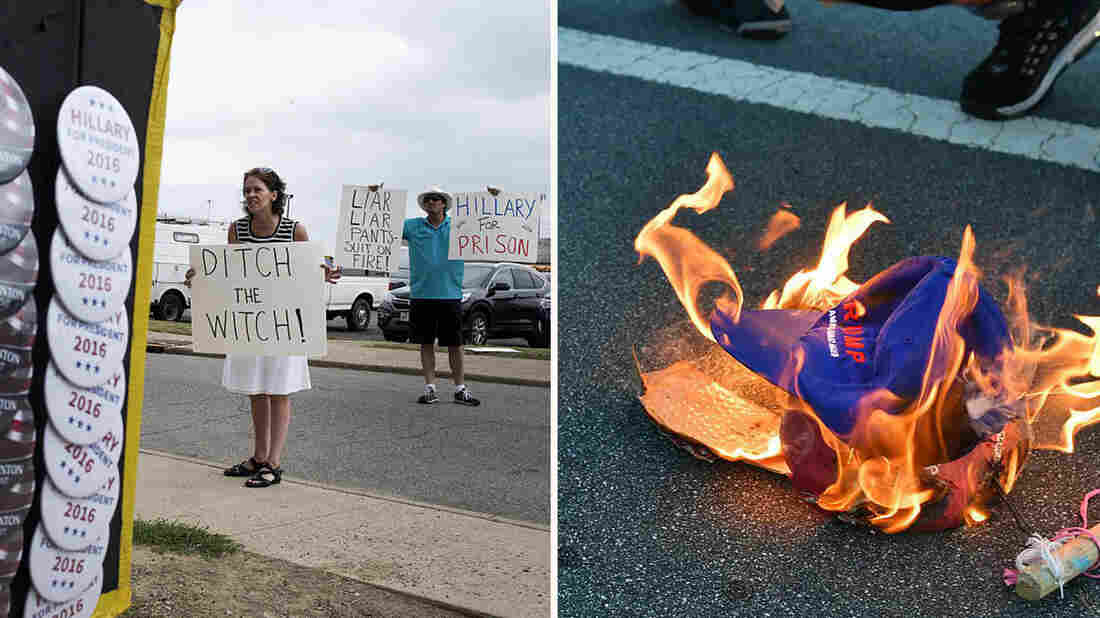 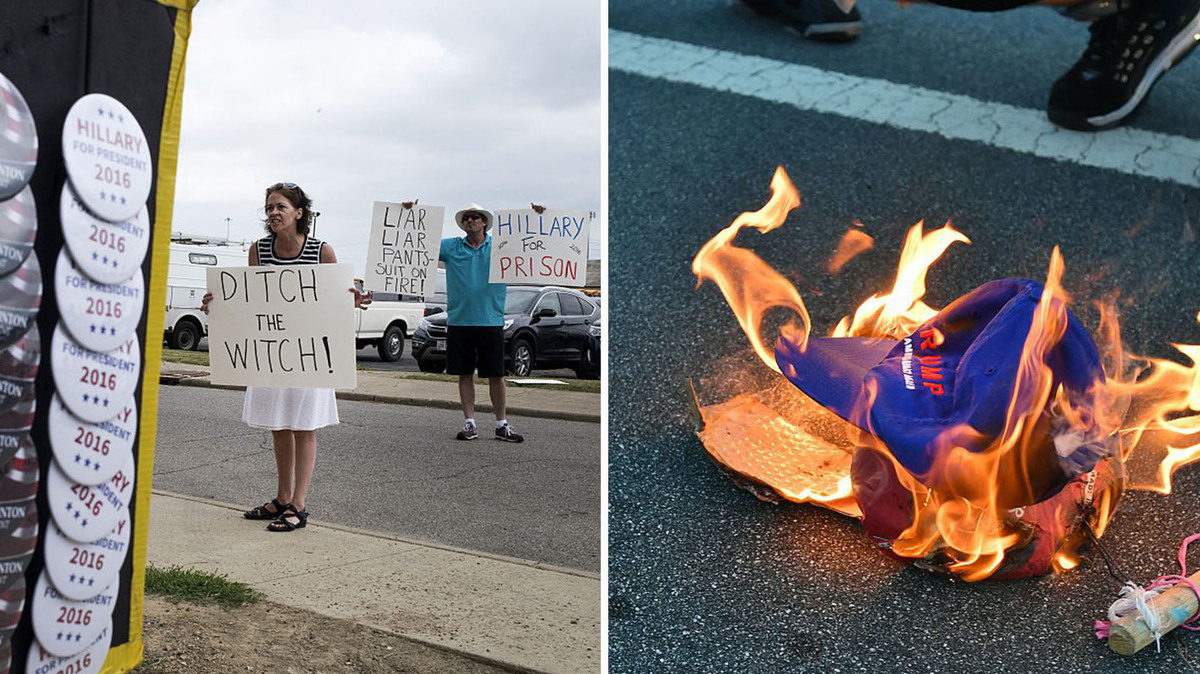 At left, demonstrators hold signs outside a campaign event for Hillary Clinton in Columbus, Ohio, on Tuesday. Right: A Donald Trump hat burns during a protest near a Trump rally in San Jose, Calif., earlier this month.

This election has been ugly.

Outside a Donald Trump rally a few weeks ago in New Mexico, anti-Trump protesters threw plastic bottles and burning T-shirts at police.

Inside, the crowd chanted "build that wall." Trump himself told protesters to "go home to Mommy." It was not the first instance of violence at a Trump rally.

Hillary Clinton has mostly held smaller events, but protesters have shown up carrying signs with slogans like "Ditch the Witch," "Liar, Liar Pants-Suit on Fire" and "Hillary for Prison!"

If that makes you think that the two major political parties hate each other more than they have in decades, you'd be right.

According to a report released Wednesday from the Pew Research Center, more than half of Republicans and Democrats each have "very unfavorable" views of the opposing party, representing a sharp increase from just two years ago. It's the continuation of a decades-long upward trend in animosity.

"For many, partisanship is as much about disagreeing with the other party as it is about agreeing with their party, and in some cases, more so," said Jocelyn Kiley, a primary researcher on the study.

The report, the bulk of which comes from a nationally representative panel of over 4,000 people, was conducted this spring, before Donald Trump and Hillary Clinton became their respective parties' presumptive nominees.

The dislike expressed in the survey by Democrats and Republicans alike went further than just a bad taste in the mouth: More than half of Democrats said the GOP actually frightens them, and just under half of Republicans said the same about Democrats.

Donald Trump: Clinton May Be 'Most Corrupt Person Ever To Run For President'

Even political independents have been affected by the growing antipathy. According to the report, independents who lean toward a party are much more likely to cite a negative reason for that inclination — that the other party is bad — rather than a positive one.

"They're leaning away from a party rather than leaning toward one," Kiley said.

Shanto Iyengar, a political science professor at Stanford University, has seen this partisan antipathy in his own research as well. Iyengar says the divide in cross-party relations has been steadily rising since the late 1980s. It doesn't surprise him that it's gotten worse.

The bad blood also extends beyond the difference stances on political issues. According to the report, most Democrats and Republicans think members of the other party are more closed-minded than the average person.

A sizable minority of each party also finds opponents to be more immoral, lazy and dishonest than other Americans. Nearly half of Democrats and Republicans find political discussions with the opposite party to be "stressful and frustrating."

"It sends a clear signal to elected officials that you shouldn't betray the party," he said. "Anyone who tries to compromise is seen as a traitor."

So, is there any hope for us all to just get along?

[Independents are] leaning away from a party rather than leaning toward one.

Maybe. While there is a lot of hate out there, having a friend on the other side of the aisle makes a difference. According to the Pew report, people with at least some cross-partisan friendships were less likely to rate the other party coldly.

Iyengar said forming those friendships is just a matter of finding common ground elsewhere. He brought up the Cleveland Cavaliers and their historic Sunday-night victory against the Golden State Warriors. That's an opportunity to make a friend without bringing up politics right away.

"I don't think I'm going to turn to the person sitting next to me at the Cavaliers game and say, 'Hey, are you a Democrat?' " he said.

If you're not fortunate enough to be a Cleveland fan this week, you might want to take a moment at your family's July 4 barbecue to spark up a debate with that uncle or aunt of yours (you know the one). Maybe you'll find some room for compromise.