Accessibility links
'Veep' Actor Tony Hale Says, 'There's A Reason Why I Play Anxious Characters' Hale played Buster on Arrested Development and is Gary Walsh on the HBO series Veep. "It comes from a lot of personal anxiety," Hale says. "It's really fun to bring that into the characters." 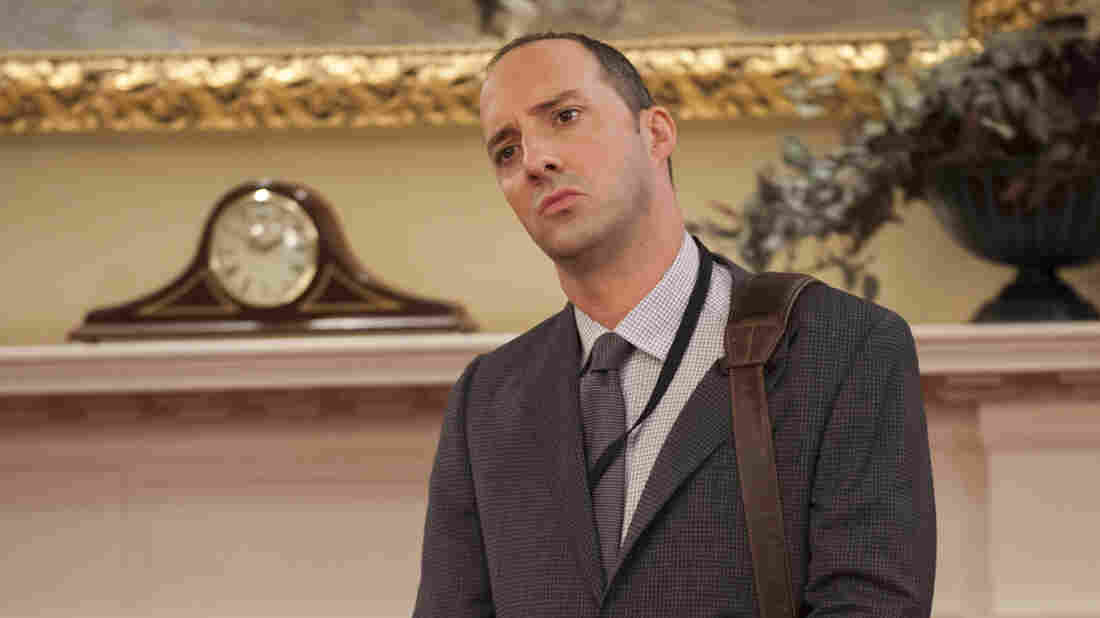 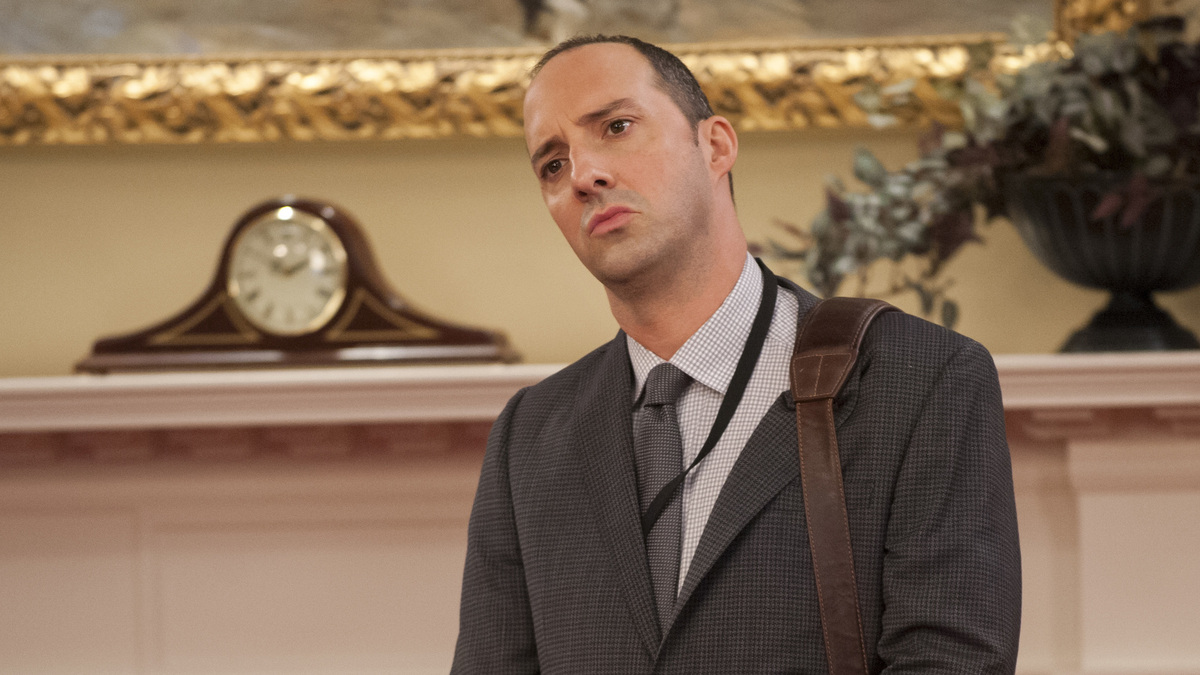 Actor Tony Hale is really comfortable playing doormat characters. The two roles he's gotten the most attention for — Gary Walsh on HBO's Veep and Buster Bluth on Fox's Arrested Development — both fall squarely into that category.

Gary, Hale's character on Veep, is the personal assistant to Selina Meyer, who is trying to win an election recount for the presidency this season. As Selina's "body man," Gary accompanies his boss everywhere, holding her oversized handbag and whispering in her ear as needed.

"[My character] has no identity outside of Selina Meyer," Hale says. "She is so verbally abusive to him, but he doesn't hear it, he just bounces back ... and he is perfectly content where he is."

Both Gary on Veep and Buster, the youngest brother on Arrested Development, are prone to anxiety — a feeling Hale can relate to. The actor suffered from panic attacks when he was younger, but has since found some degree of peace in faith and prayerful meditation.

"There's a reason why I do anxious characters — it comes from a lot of personal anxiety," Hale says. "The great thing is, having that history, it's really fun to bring that into the characters ... and play with it."

On playing Gary, his character on Veep

Gary has been with the president for many, many years and he's what's called a "body man." What he does is he pretty much carries around a bag and anything she needs, like it could be Purell, or pens, or her speech, or other things in this bag, so he's always by her side.

The thing about Gary that's fun to play is he knows nothing about politics, doesn't care to know about politics, but he knows these random factoids about people. So he'll just whisper in her ear, "His daughter's in rehab," or "He likes eclairs," or "He's a fan of Britney Spears," or something just random, so she can have these conversation pieces, which are probably not good conversation pieces to have, but he thinks so.

On getting the part of Buster Bluth on Arrested Development

I was living in New York ... and towards the end of my time there I had been doing commercials and theater, and this audition came my way, and I was a big fan of Christopher Guest movies, Waiting for Guffman and Best in Show and stuff, and this script reminded me of that. ... I had just been doing commercials and had done very little television, so I was thinking, This is such a longshot, but I'll go in and put myself on tape. And they called me out to LA for a callback, which was crazy, that's crazy. I remember telling my then-fiancée, "What's happening?!"

So I flew out to LA and went to the audition and got the part, which is nuts. ... I think I had to stay out there, we were going to go right into shooting and I remember I didn't have any underwear, so I had to go to Old Navy to get underwear, and I was just so overwhelmed by the experience.

I loved [creator] Mitch Hurwitz, and I loved the writing, and the character and it was quite crazy. I moved back to New York and I was done and then 10 days before I married my wife the show got picked up and I was like, "Sweetie, we're moving to LA," and she kindly followed me.

On creating a faith group for people in the artistic community, and then meeting his wife in that group

My friend and I had started this group called The Haven where we had met a lot of people who were artists whose faith was important to them, but they maybe weren't necessarily supported by their church back home, or they weren't supported by the Christian community with what they were doing. ... We just started this group where we went to see each other's work and hung out, and she had come to that and we met and hit it off. ...

I think anytime in someone's faith journey, my faith journey also, you go through doubting ... I think you kind of have to go through that, honestly, just to ask the tough questions. ... I mean, life is crazy, and to know that honestly a loving God is walking through it with me is very comforting for me. But yeah, I've been through my own times of just, What does this mean and how can this mean this? And ask the questions. I've thankfully had a lot of people around me who have allowed me to ask those questions, and we've talked about it and walked through it together and struggled through it, and that's very, very important. And it's important to have those people around you can be honest with.

There's a reason why I do anxious characters — it comes from a lot of personal anxiety! I remember being in New York and thinking, I want to have something in my back pocket to be able to talk about, and if like three or four months had gone by since doing the job, I'm like, Ugh, that's too much time to bring that up in conversations. So you wanted to have something relevant. ...

On trying to be in the moment

I really learned a massive lesson from Arrested Development, because here's a show that was so well-written and so funny and the cast was so great, I really did love being there, but I remember getting it and it's all I ever wanted, and I remember it not satisfying the way I thought it was going to satisfy. It really freaked me out, because it was my dream. It was my dream to be on a sitcom.

... if you're not practicing contentment where you are, you're not going to be content when you get what you want ...

I look back and I think, even though New York was great and I had a fantastic support system and I did get all these commercial jobs, I don't think I was very present. I don't think I was very in the moment. I always looked and I was always like, Oh that sitcom's coming ... and I was so always far ahead. And then when I got it, and I had given that thing so much weight and it didn't satisfy me — it really woke me up ...

It really woke me up that if you're not practicing contentment where you are, you're not going to be content when you get what you want, and it really scared me.

It actually really woke me up when my daughter was born right after Arrested Development, because if there's anything a baby does is you have to be present cause you gotta keep it alive. It really gave me an opportunity to kind of assess some things and look back at my life and be like, I just have not been very present. And since then, through just kind of walking through that kind of awareness and therapy, practicing being present has made things richer for me, honestly. I'm not great at it ... but I'm trying to work on it.

On how prayer helps him stay present

I think prayerful meditation, being still in a space, being still with God, I don't do that enough. It's crazy, because when I do do it, I always walk away from it going, Why the hell am I not doing that more? Because it's so centering and it broadens the picture of life, really. I mean, you just kind of go, We're spinning on a planet, here. And I'm giving a lot of anxiety and a lot of weight to stuff that just doesn't matter, and it's so focusing.