Accessibility links
Review: Jacob Collier, 'In My Room' A 21-year-old YouTube star makes the leap from homemade music videos to an album stuffed with surprises and infectious exuberance.

Review: Jacob Collier, 'In My Room'

Review: Jacob Collier, 'In My Room' 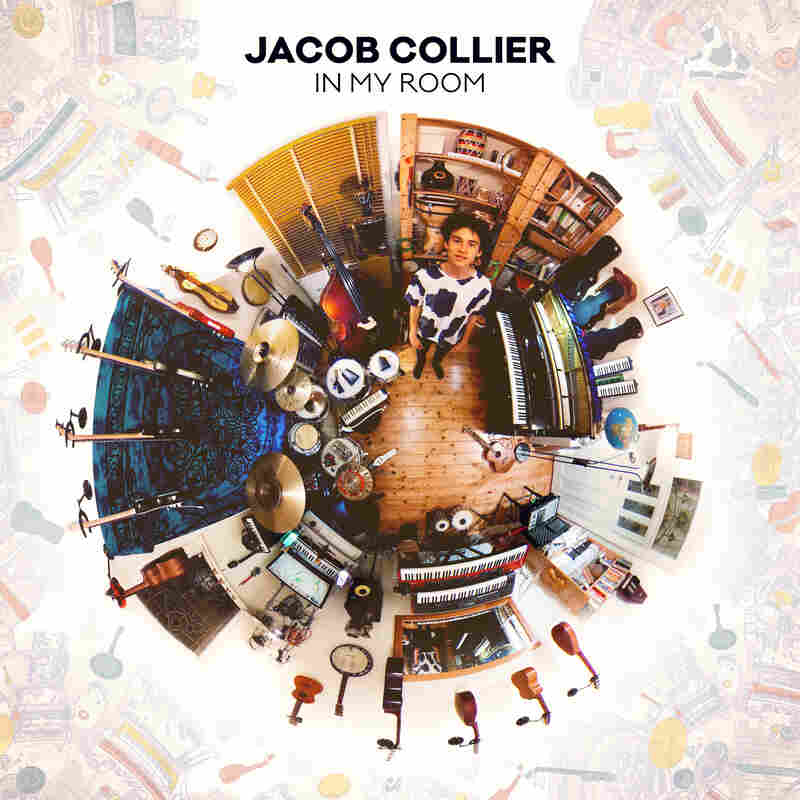 Jacob Collier, In My Room Courtesy of the artist hide caption

Jacob Collier first attracted attention with endearing homemade music videos that feature his versions of classic songs by Stevie Wonder, Michael Jackson and others. Now 21, the multi-instrumentalist is seen in his family's well-stocked music room, playing every instrument. The short clips use split and multiple screens to highlight each of the (many) parts; here's Jacob smacking the snare drum, and there's another Jacob, across the room, snapping out a funk bassline.

The best of these, like the "PYT" video that's had more than 300,000 views, are entertaining primers in the art of multi-tracking, sometimes involving eight Jacob Collier voices in glorious, Creamsicle-hued harmony. They're also exercises in music-geek showmanship: chances to watch as an unfathomably talented kid tears apart a beloved hit, modulates into a distant key just for a momentary chuckle, adds extra beats to confuse dancers, and drops devious jazz-piano science between verses.

There's a thin line between genius and gimmickry. Collier's debut album, In My Room, walks right up to it, peers out into the Valley Of Random Shredding, and then tiptoes back to the tasteful side. The title track is a faithful rendering of the Beach Boys classic, and though the voice chorale features some slyly disruptive interior tension, the mood of plush, daydreaming introspection prevails. This is the one to play for your Four Freshmen-loving grandfather and your glee-club pal who can't get enough of Take 6.

Elsewhere, Collier changes the character and tone of his singing voice to suit his original material: He delivers the opening track, "Woke Up Today," as a Bootsy-schooled funk crusader, shifts into a believable tone of sullen introspection to sing the gorgeous "Hideaway," then glances at D'Angelo for the falsetto-kissed "Down The Line" and a brilliant episodic glide called "Saviour" that finds him rushing some phrases and placing others radically behind the beat. (The video for that one, shot in a continuous take, shows that Collier's visual concept has evolved quickly.)

Collier's vocals are showy and scene-stealing in a musical-theater way, but his exuberance is not that of a stage pro: Running through the singing and all the overdubbing that supports it is a palpable sense of play and discovery. Most of the time, the assembled tracks sound incredibly loose, governed by leap-of-faith ad-libs and happy accidents. Sure, his approach to music-making demands planning, but Collier isn't a slave to the script: Dive in and listen on a granular level to any individual part, and you'll hear unrestrained joy running right alongside whatever crazy chops and meta stuff is going on.

That's the thing about Collier: His music operates on multiple levels at once. His sound is all happy showbiz dazzle on top, while underneath, in the boiler room, he's conjuring Steve Reich and Frank Zappa. His tunes are rooted in stunning, opulent, proudly consonant chords, but sometimes they take sudden left turns into terrifying dissonance. He's daring and calculating all at once — a child of the Internet who darts from one magical idea to the next, sometimes abandoning hypnotic grooves before they've even fully coalesced. Above all, Collier's got an agile, fully alive musical mind and a distinct sound and, perhaps most importantly, the willingness to take chances. Listening to his sometimes dizzying debut, you get the sense that he could go in any direction and succeed. Or, at the very least, create something interesting.