Accessibility links
Donald Trump Praises 'Brexit,' Says Falling Pound Could Be A Good Thing In Scotland, which voted against leaving the European Union, Donald Trump praised the vote to leave. He predicted it's a sign of a populist revolution to come across Europe — and the United States. 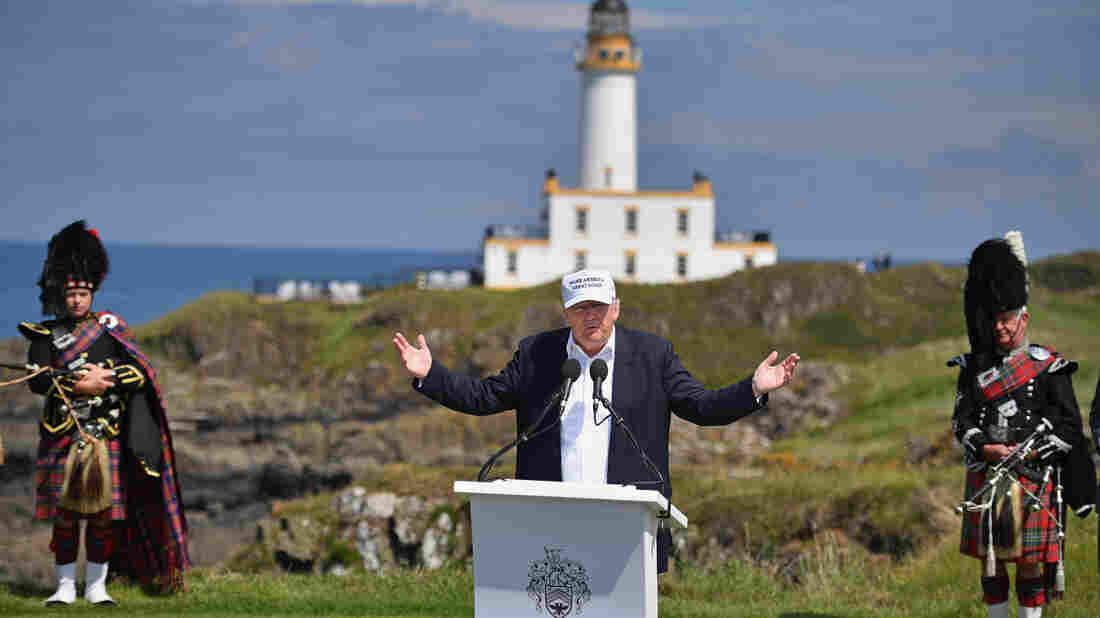 Donald Trump speaks from the 9th tee at his new Trump Turnberry Resort Friday in Ayr, Scotland. Trump endorsed the U.K. decision to leave the European Union even though Scotland was against it. Jeff J Mitchell/Getty Images hide caption 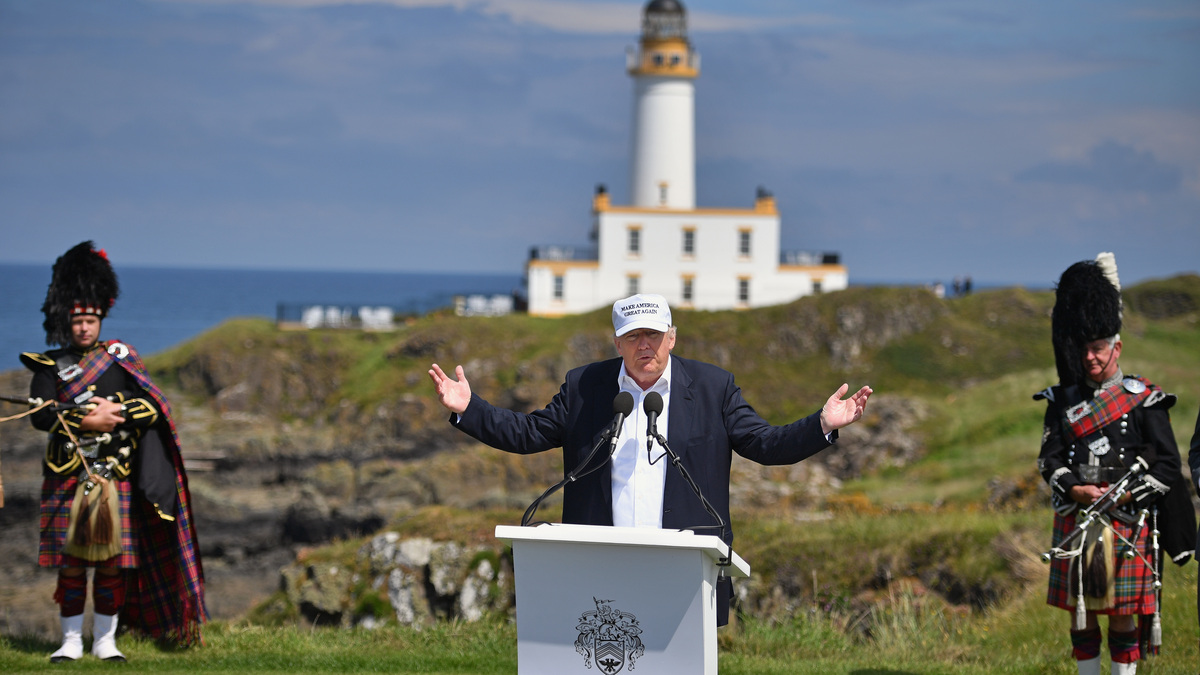 Donald Trump speaks from the 9th tee at his new Trump Turnberry Resort Friday in Ayr, Scotland. Trump endorsed the U.K. decision to leave the European Union even though Scotland was against it.

Donald Trump celebrated voters' stunning decision in the United Kingdom to leave the European Union, while he marked the re-opening of his golf course and resort in Scotland.

Trump contended that the U.K. had "taken back their independence" and predicted similar populist, nativist movements throughout the Western world, like the one fueling his candidacy in the U.S.

At a press conference from the 9th tee of the golf course, a lighthouse along the rocky coast in the southwest of Scotland in the distance, Trump seemed unconcerned about the precipitous, overnight drop in the British pound. the pound fell to a 30-year low following the vote, but Trump said it could be a good thing — at least for businesses like his.

That is a remarkable suggestion from a man looking to lead the world and who is already facing criticism, even from within his own party, for tending to business interests while running for president of the United States.

Trump linked the "Brexit" vote to the current political climate in the United States.

"I think I see a big parallel," Trump said. "I think people really see a big parallel — a lot of people are talking about that. And not only the United States, but other countries. People want to take their country back."

Take Our Country Back was a slogan of the Tea Party that mirrored Trump's Make America Great Again presidential slogan. It has great parallels in the sentiment in the U.K. to go through with this historic move that was driven by blue-collar whites without college degrees put off by immigration that has become a scapegoat for lower wages for some. Nativist sentiment in the U.K. has also been a factor for those who believe the British brand has been watered down.

The decision to leave the E.U., which was by a narrow 52-to-48-percent margin, followed a contentious debate about problems in the European economy and the wave of immigration of refugees fleeing violence in countries including Syria.

"People want to see borders," Trump said. "They don't necessarily want people pouring into their country that they don't know who they are and where they come from."

The real-estate developer added that he thinks the departure from the E.U. will benefit Britain, at least in the long term. Trump predicted more travel to the U.K., saying, "I think it could very well turn out to be a positive. Nobody really knows; you'll know in about five years; you'll be able to analyze it."

Upon arriving in Scotland, Trump tweeted, "Place is going wild over the vote. They took their country back, just like we will take America back."

Just arrived in Scotland. Place is going wild over the vote. They took their country back, just like we will take America back. No games!

That's despite the fact that 62 percent of Scots voted to remain in the E.U.

Trump was met with a small group of protesters outside the club. As the press conference began, a protester who'd managed to get inside was escorted out after attempting to pass out golf balls painted with Nazi symbols. 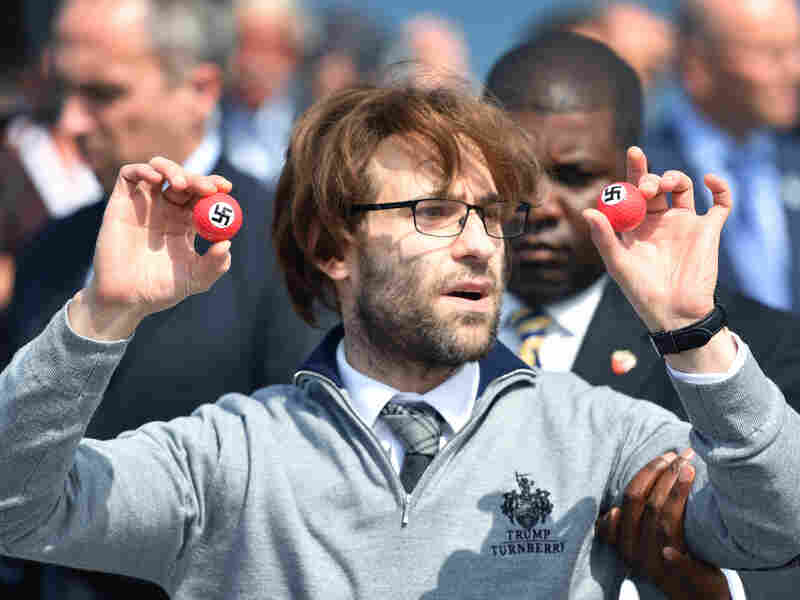 Comedian Lee Nelson is taken away by security Friday while holding golf balls stamped with swastikas, as he protests Donald Trump, at the opening of Trump's resort in Scotland. Jeff J Mitchell/Getty Images hide caption 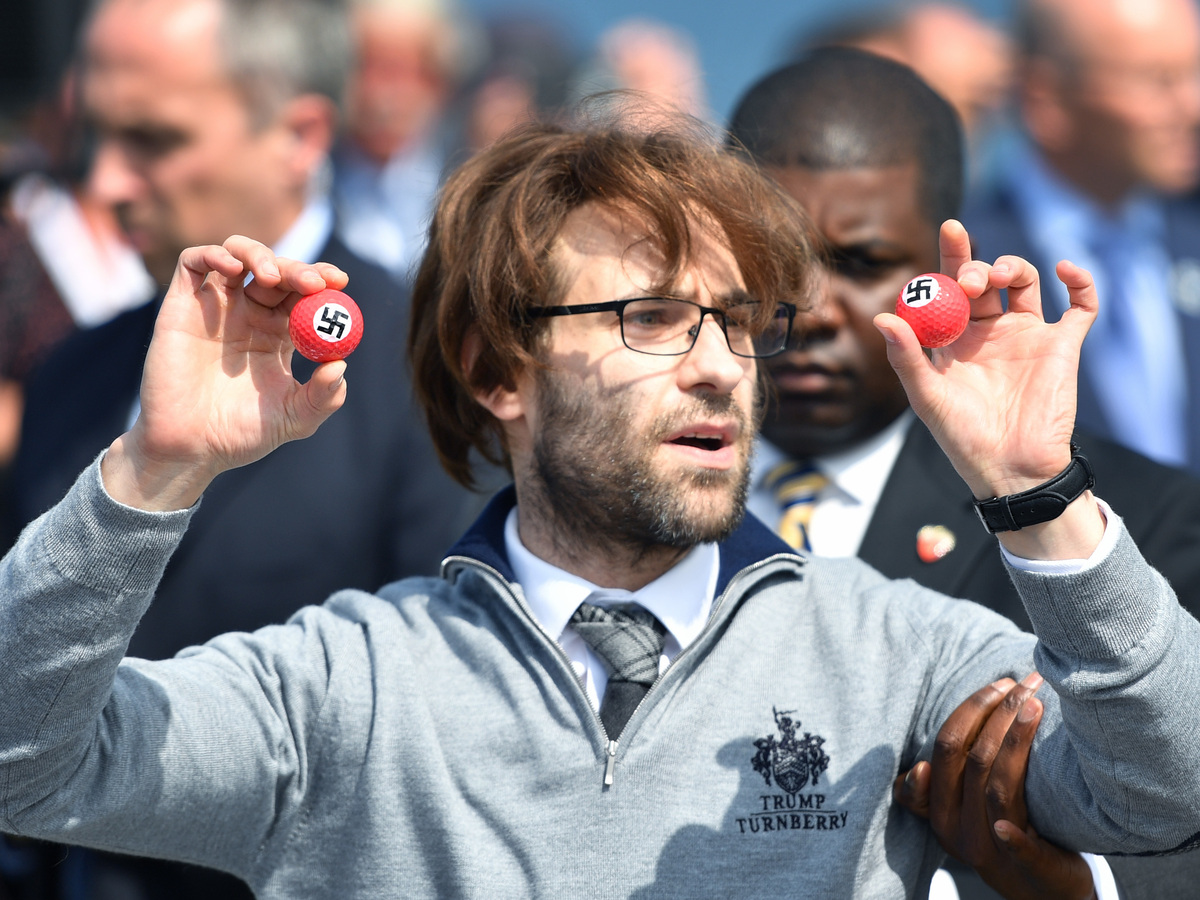 Comedian Lee Nelson is taken away by security Friday while holding golf balls stamped with swastikas, as he protests Donald Trump, at the opening of Trump's resort in Scotland.

"These are the new balls available from the clubhouse — part of the new Trump Turnberry range," said the man, identified by some news outlets as comedian Lee Nelson.

During a question-and-answer session, Trump was asked about Prime Minister David Cameron, who'd opposed leaving the E.U. Cameron resigned after results of the vote became clear. Trump said it was appropriate for Cameron step down.

"He was wrong on this," Trump said. "He didn't get the mood of his country right. He was surprised. I think he was very surprised to see what happened, but he is a good man and he felt that way - and probably did the right thing," Trump said.

Trump and Cameron had previously clashed over Trump's call for a temporary ban on Muslim immigration to the U.S. At the press conference, and in a statement released by his campaign, Trump promised to strengthen ties with the U.K. if he's elected president.

"I think zero will change on that score," Trump said. "There's never been a better ally."