Accessibility links
Zappa On Zappa: 'Eat That Question' Tells A Contrarian's Story In His Own Words The new documentary, compiled from a deep archive of interviews, focuses on Frank Zappa's serious side — as a composer keen on exploring ugliness and difficulty. 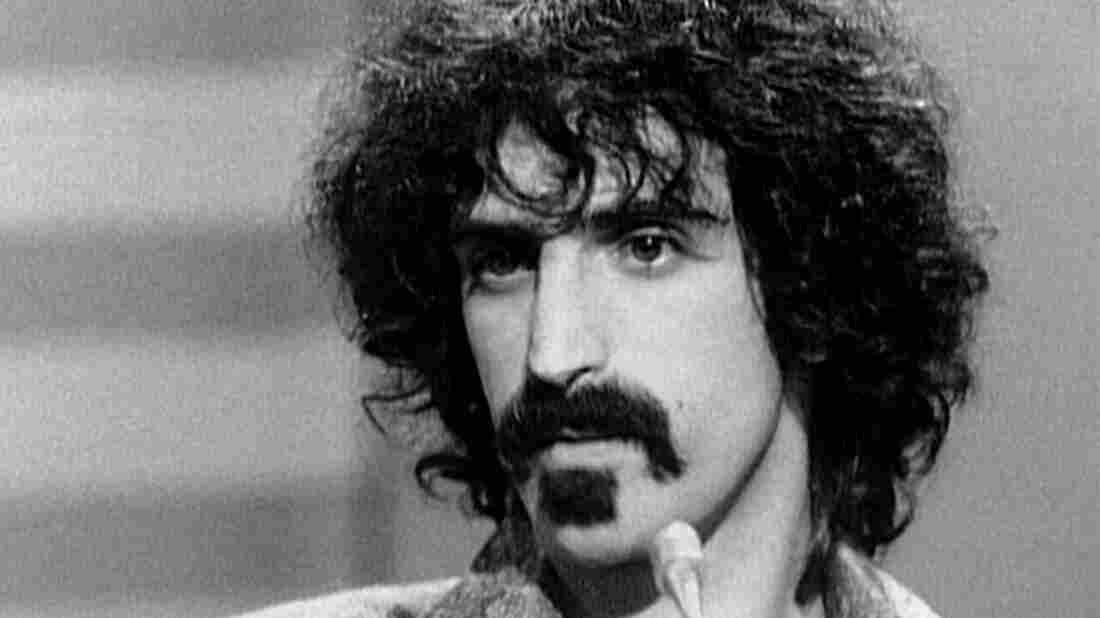 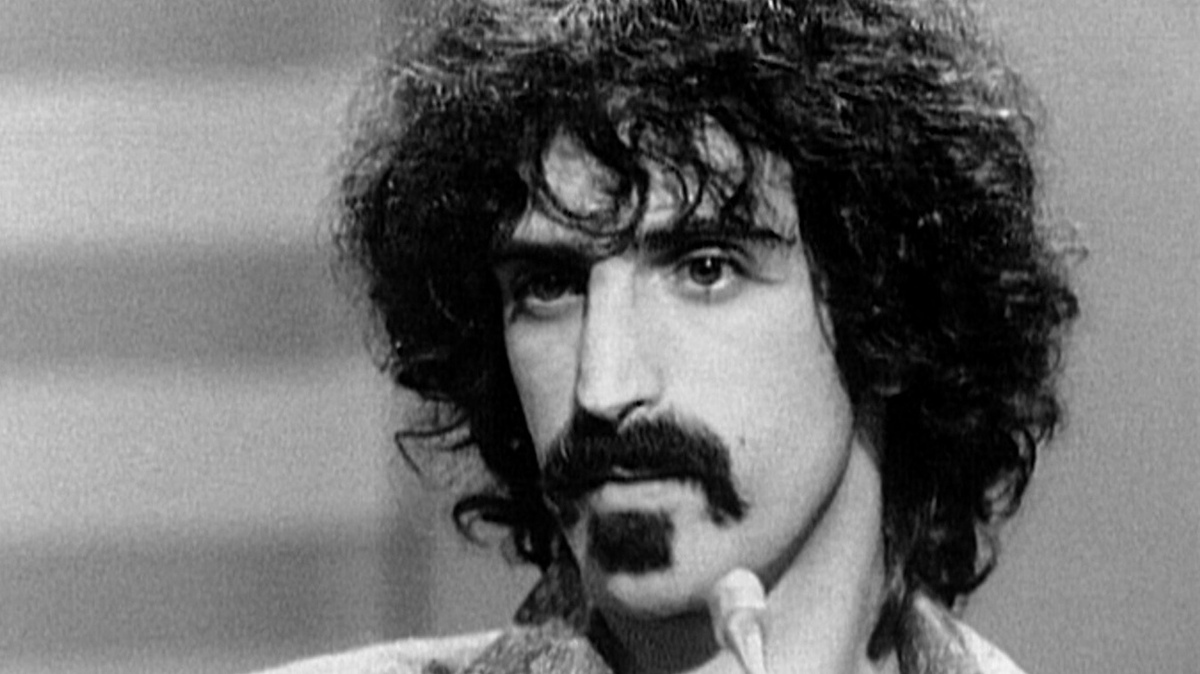 Frank Zappa being interviewed on British television in 1973.

Musician and composer Frank Zappa was a lot of things: biting satirist, ferocious critic of societal norms, outspoken defender of free speech. He saw himself as not only an entertainer, but also a serious composer. And he saw no contradiction in being all of these things at once, to the consternation and confusion of the many journalists who interviewed him.

A number of those interviews have been compiled in German documentarian Thorsten Schutte's new film Eat That Question: Frank Zappa in His Own Words. At around the age of 13, Schutte discovered Zappa's music when a teacher played it for him in school, and was hooked.

"It was something that I hadn't heard before," Schutte says. "The beauty of the melody, but also the dissonance of it and the noise and the cacophony."

Tracking down Zappa's interviews became a kind of hobby for Schutte. He says fans have become the curators of an informal internet Zappa archive and have compiled untold quantities of never-before-seen footage.

"This film is not solely for fans, but it's also there to be somehow a gateway for younger generations to explore him and who know nothing about him," he says. "Many of my students, when I showed them the film, they asked me, 'Who's this man with the beard?'"

Frank Zappa formed the Mothers of Invention in 1964, but he had been composing since high school. Influenced by contemporary composers of the time like John Cage, Karlheinz Stockhausen and Krzysztof Penderecki, started by writing chamber music and small orchestral pieces, and did not write his first rock song until he was 21. 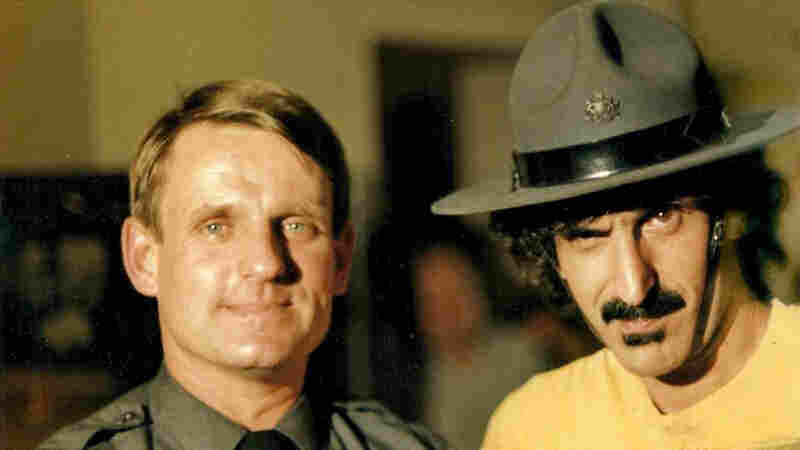 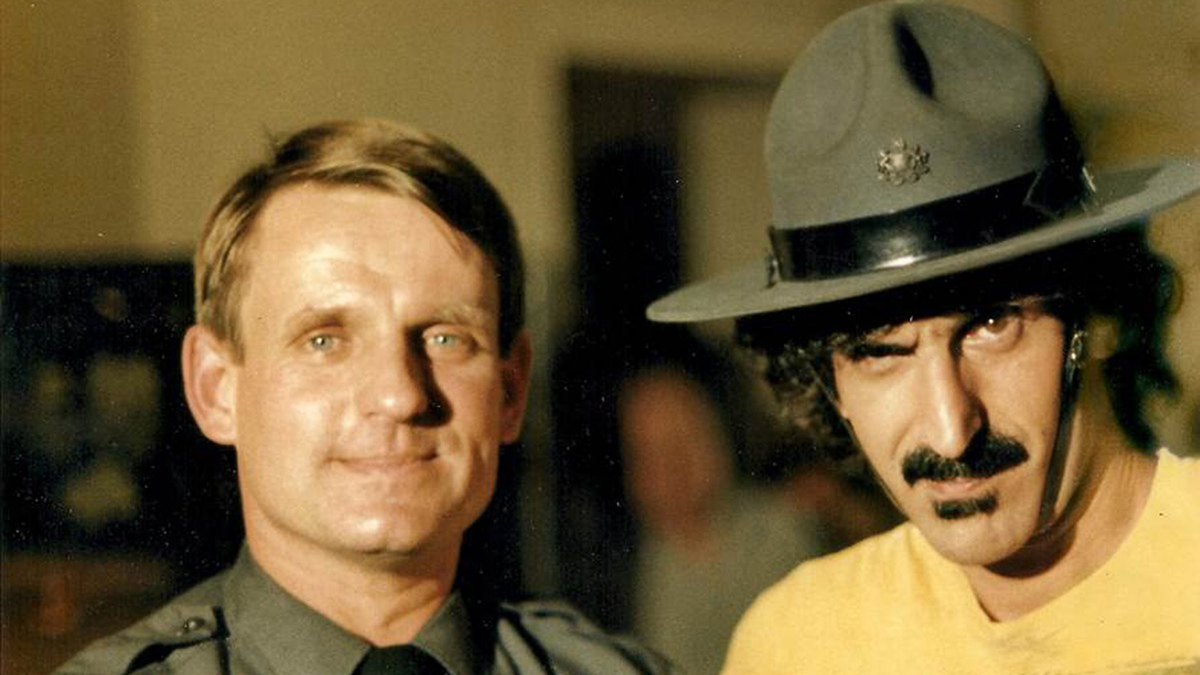 Zappa in 1981 with Pennsylvania state trooper Chuck Ash, who interviewed the musician during an anti-drug campaign run by the Montgomery County school district.

He was not always happy with his earliest efforts at composition, as he says in an interview included in the new documentary. He would sit at a piano cutting up sheet music with a razor blade, trying to rearrange it in new ways.

"Then I heard what some of the stuff sounded like that I had been writing, and it was so ugly that I decided to go backwards and get into the melodic area again," he explains. "Then people started telling me that my melodies were ugly. So I guess I'm successful."

Zappa, who died in 1993, left behind a trove of music. Bunk Gardner, a classically-trained woodwind player whose brother played trumpet for the Mothers of Invention, says much of the music was difficult to play: complex time signatures layered on top of one another, fiendishly fast tempi, never the same thing twice.

"He liked that!," Gardner says. "And I think he also felt that it really kept everybody on their toes. You better, better focus."

Gardner continues to play Zappa's music with keyboard player Don Preston in the Grandmothers of Invention. While Preston bristles at the notion that Zappa was a genius, he looks back with fondness on their days playing together.

"I can remember, I don't know how many times, when I was just so grateful to be there playing this music and do exactly what I always wanted to do: emulate some of the late composers and also take my own playing into those realms and go as far as possible with it," Preston says. "I can't think of a night where I wasn't totally grateful for being in that position."

Schutte — who spent eight years making his documentary, in addition to all of those hours in the archives — is also grateful for what Frank Zappa's music gave him.