Accessibility links
Book Review: 'Ninefox Gambit,' By Yoon Ha Lee Yoon Ha Lee's new novel is hard to sum up — in an alien world so dissimilar to ours its technology seems like magic, reality is a consensus that requires intense, rigid belief to function. 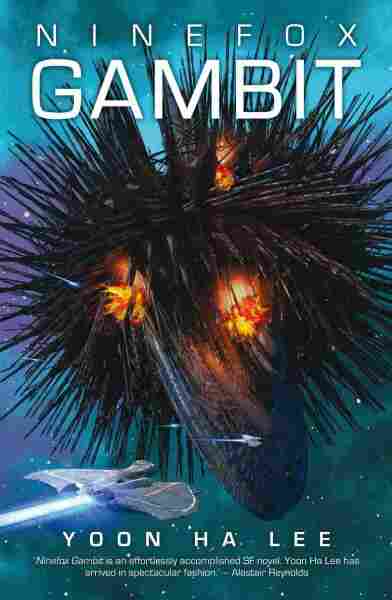 I like the cold drop. The hard plunge. The fast and reckless descent into alienness that can only be pulled off by a world-builder who inhabits their make-believe universe so completely that a first page entry, mise en scene, reads as natural and as jarring as waking up in someone else's body, upon a shore so distant and strange that no map for it yet exists.

"At Kel Academy, an instructor had explained to Cheris's class that the threshold winnower was a weapon of last resort, and not just for its notorious connotations. Said instructor had once witnessed a winnower in use. The detail that stuck in Cheris's head wasn't the part where every door in the besieged city exhaled radiation that baked the inhabitants dead. It wasn't the weapon's governing equations, or even the instructor's left eye, damaged during the attack, from which ghostlight glimmered.

"What Cheris remembered most was the instructor's aside: that returning to corpses that were only corpses, rather than radiation gates contorted against black-blasted walls and glassy rubble, eyes ruptured open, was one of the best moments of her life."

That's how Yoon Ha Lee's novel, Ninefox Gambit, opens. All death and horror and words that are slippery — not meaning precisely to us what they do to the characters in whose mouths and minds they live.

And nothing gets easier from there. Lee's is a universe that operates under different laws than does ours, where science and technology are based not around the manipulation of atoms (necessarily), but the interface of numbers and observance of a calendar, where power derives from the order given unto things by acceptance and belief in them.

So how much can you screw with a world before you take it completely to pieces? How much fundamental similarity to our own must an author's imaginary place possess in order to hang together for a reader? With Ninefox, Lee has turned this elementary concern into a game of chicken he plays with himself, pushing hard to see how many of the essential, structural underpinnings of the universe can be removed before the fabric of stars unravels. And then twisting himself in the opposite direction, asking (and answering) how, in a place so alien, can you root the experience in something that gives it the roundness of an internal humanity?

Here's the plot, presented as simply as I can make it: In the Fortress of Scattered Needles, a "calendrical rot" has begun altering the fabric of reality. It is the result of heretical forces allied against this world's rulers, and someone is going to have to go in there and purge the non-conformist thought from the system. Two someones, actually. A living soldier named Cheris with an unlikely facility for mathematics, and Jedao, the centuries-old ghost of a brilliant general and known mass-murderer who lives in her shadow and in her head.

So how much can you screw with a world before you take it completely to pieces? ... Lee has turned this elementary concern into a game of chicken he plays with himself.

I know, right? But stick with me here a minute, because here's where it gets cool.

In Ninefox, Lee is playing with the idea of consensus reality — of a techno-political system that relies on rigid belief in order to function. Which, more specifically, requires near-religious (actually super-religious) adherence to a calendar: A numerical system which can be manipulated to alter reality.

It is technology so dissimilar to our own that it seems like magic; math transmuted into religion. It's overwhelming and jarringly bizarre, this world where light storms lash the land and a change in battlefield formation can create shields or tornadoes or magical laser rays that melt people's faces off. But it is also beautiful, vast and rooted in the real by Lee's balanced focus on those things that are more common than alien: On shared meals and loss and dreams and regret. On the relationships between characters existing in this universe (their universe, where none of this is strange at all), and the clashes between systems of belief.

And it is precisely the unforgiving immersion in Lee's fully realized world of high science, faith and numerology (presented with no hand-holding, no info-dump, only context) that makes the smaller, character-driven moments pay. Which makes Cheris's observation of a tree in flower, Jedao's clipped remembrances of his family's shame, or the two of them watching soap operas together in a quiet moment before war gleam brighter in their recognizable humanity.

There is, of course, battle. This is a war story after all, and it proceeds with a war story's plodding inevitability. Fleets assemble, ships clash, soldiers die. It is also a novel of games. Of betrayals within betrayals. Rather than aping the generic clipped-and-grim style so often employed by other, less talented writers, Lee leans in the other direction, finding a sumptuous beauty in physical moments and complexity in thought and motivation.

Ninefox is a book with math in its heart, but also one which understands that even numbers can lie. That it's what you see in the numbers that matters most. And that something — maybe all things — begun with the best, truest of intentions can go terribly wrong once the gears of reality begin to churn.

"I'll be glad to get underway," Cheris said.

"Everyone says that," Jedao said, "but then the killing begins."