A Mystery Novel Is The Mystery At The Heart Of 'Blockbuster!'

A Mystery Novel Is The Mystery At The Heart Of 'Blockbuster!' 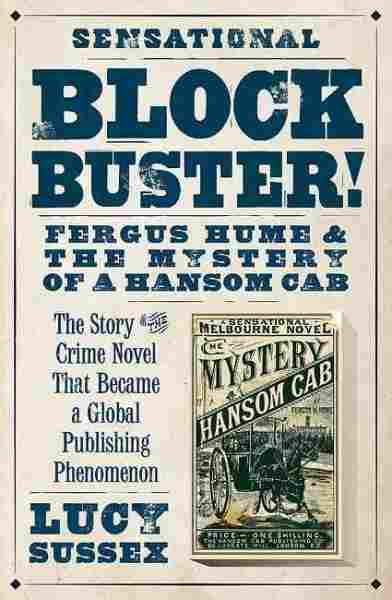 Fergus Hume & the Mystery of a Hansom Cab

In true Victorian style, you need only a few tantalizing details about Fergus Hume's The Mystery of a Hansom Cab to intrigue you. The 1886 murder mystery, part of an emerging genre of "shilling shockers," became a runaway hit in Australia. After Hume sold the copyright for a pittance, it was published in England to smash sales — even pirated in other languages. Over half a million copies of the novel were sold worldwide ... and Hume never saw a dime of it.

It sounds like a tale of tragic artistic downfall — and to some degree, says Blockbuster! author Lucy Sussex, it was. Certainly Hume lost a fortune, and worked the rest of his life for another hit that never came. But Blockbuster! is a snapshot of something wider: Hume was a man of his age, and the book is dedicated to what, exactly, that means.

Blockbuster! is a peculiar read, so well-researched and self-aware it ends up being more interesting for what's in its periphery than what's at its center. Sussex isn't lacking in attention to detail; Hume's early life in New Zealand, uneven creative years in Australia and England, and his place in the cultural canon are duly noted. (If you're hoping for any details of the Mystery in question, you won't find it here; the novel itself stays a cipher in the middle of the action.)

And though Blockbuster!'s first half is a sea of names and anecdotes, a rare biography emerges — neither a glittering star nor a tortured genius, but a writer getting by. Book reviews, novels, poems, plays: Hume did it all. He even "localized" Australian productions — taking British plays and shifting geographic and cultural references so they'd scan for the Melbourne set.

But it's understandably difficult to take a private and changeable man — who routinely "localized" his autobiography by cutting out ex-friends and unwanted circumstances — and give him a tidy narrative. His success was an unmatched example of serendipitous marketing and the public's genre appetite, while the author himself vanished into obscurity for reasons unclear.

What 'Blockbuster!' actually does best is intrigue us about everyone in the vast, tangled web around 'Mystery of a Hansom Cab.'

In trying to examine invisible history, the book occasionally distracts more than illuminates: Did the Hansom Cab fad encourage a British real estate bubble in Melbourne that led to a bank crash? When a real-life hansom-cab murder brought the book under fire as a bad influence, was moral outrage or scandal the greater market force? Did those unauthorized translations create a public appetite that launched careers worldwide? But to Sussex, these questions are crucial to understanding how the late-Victorian world was simultaneously shrinking and opening — a sweet spot for the book that became a sensation.

What Blockbuster! actually does best is intrigue us about everyone in the vast, tangled web around Mystery of a Hansom Cab. Frederick Trischler (the get-rich-quick man who would stumble onto success selling Hume's novel), actress Amy Horton (a champion of Hume's thanks to the daring roles he wrote for women), and Alice Cornwell (who left her husband to become a gold miner and got rich enough to buy London's Sunday Times) were such strong influences on Hume that he later fictionalized them.

Sussex examines with equal interest the tangential encounters of Hume's life — which are also packed with fascinating people. Writer Henrietta Dugdale tested Melbourne's progressive-arts waters with her novel of a feminist utopia. Gordon Lawrence, a possible object of Hume's affections, lifted a moniker from actress Carrie Swain and went about in Sydney as Carry Swain, one of the first people to use the term "drag." And Mrs. Jessie Taylor, the steely investor who bought Hansom Cab's British copyright, orchestrated some risky real estate investments — and sued her own live-in aunt for unpaid rent. With a cast like this, if Hume gets lost in the shuffle, is that such a loss?

For one reason or another, Blockbuster! can't always hook its subject; more than once, Hume fades gently from his own biography. But Mystery of a Hansom Cab brought a moment in time vividly to life and created a sensation as a well-researched mystery with memorable characters and the occasional moral about those who reach too hard for greatness — and here, Blockbuster! mimics its subject pretty well.