Accessibility links
Massachusetts Senator Elizabeth Warren: From Professor To Pugilist Elizabeth Warren is a rock star in Democratic politics, and there are reports she's being vetted as a possible Clinton running mate. Yet just a few years ago, she was, in Washington terms, a nobody. 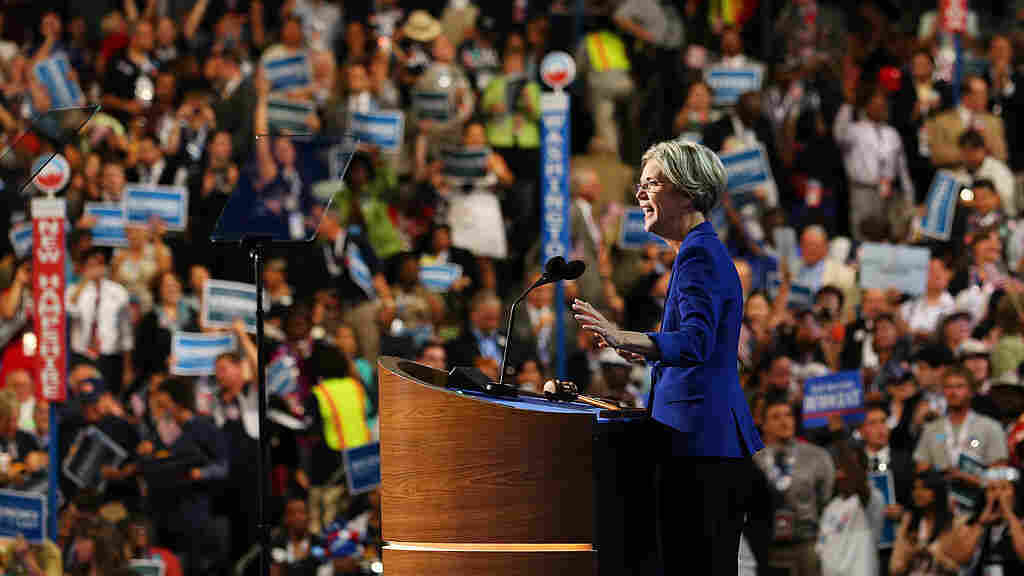 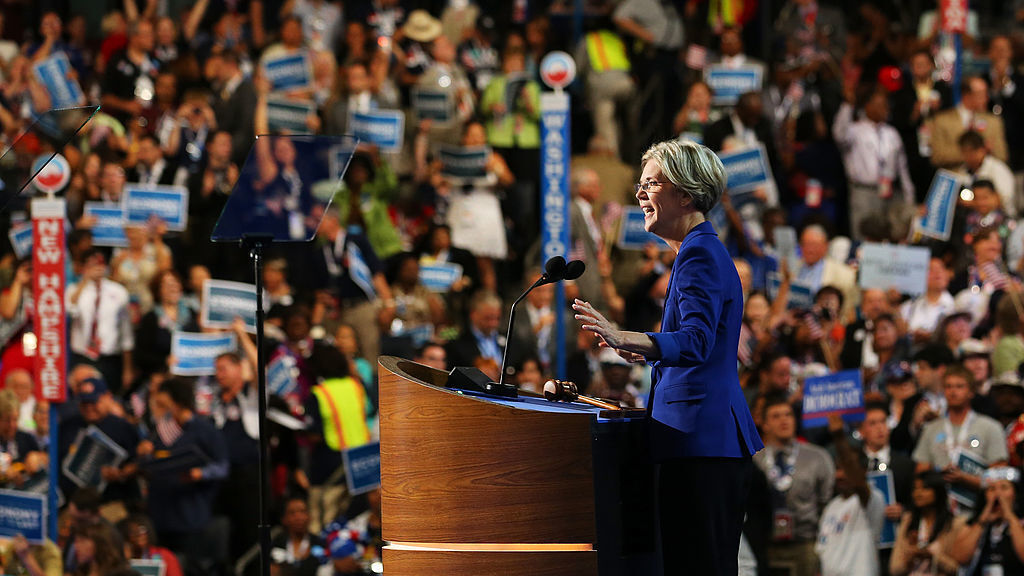 Elizabeth Warren speaks at the Democratic National Convention on Sept. 5, 2012, in Charlotte, N.C.

It was April 15, 2009, in the depths of the financial crisis. Elizabeth Warren was backstage at The Daily Show, about to make her national TV debut, but her head was not in the clouds.

It was in the toilet. She was throwing up.

Warren was a nobody on the American political scene at the time. A Harvard Law School bankruptcy professor, she had been tapped by Senate Majority Leader Harry Reid to head up a committee overseeing the disbursement and repayment of bank bailout funds.

As she described that Daily Show night in her book, Warren checked her face in the mirror to make sure she was vomit-free — and then she threw up again.

Pretty soon she was on the set, sitting just inches from Stewart.

All did not go well.

(Watch the moment below, starting at about 3:55)

As she talked, she was so far in the weeds of the congressional oversight panel's work that only a mutant accountant would have known what she was talking about. And then she said that some of the money went to P-PIP.

"Is that an acronym? " Stewart asked, incredulous.

"What does it stand for?" he pressed, to which she replied, "I don't remember."

In her book A Fighting Chance, Warren said at that point she knew: "My work in Washington was over. I'll call Senator Reid tomorrow and resign," she wrote. "Maybe they can get someone to run this panel who isn't an idiot."

The agony went on for more than six minutes, an eternity in TV time, before the show broke for a commercial and the end of her segment. But Stewart wouldn't let her go, telling her that if she had an important message for people, she hadn't gotten to it.

They were almost out of time, and the director was urging Stewart to bail, but the host pulled rank.

And when the lights came on, Warren was a different person.

(Watch the moment below, starting at about 1:55)

"So, what you're asking is if we can get this bus pulled out of the ditch — the economy," she chirped.

This crisis didn't have to happen, she told Stewart. Beginning in President George Washington's time, the country's economy was marked by periodic economic panics.

"Every 10 to 15 years, there is financial panic in our history — you just look at it," she continued. "And there's a big collapse, big trouble, people lose their farms, wiped out, until we hit the Great Depression."

That's when the country enacted federal guarantees on bank deposits, restrictions on bank investments, and some stock market regulations.

But 50 years later, she said, we started to get cocky.

"Then what happens is, we say, 'Regulation, oh, that's a pain, it's expensive, we don't need it.' So we start pulling the threads out of the regulatory fabric."

The first thing that happens is the savings and loan crisis in the 1980s and the failure of 700 banks, she observed. Ten years later, there is another major collapse, and by the early 2000s, there is Enron, which shows that books that look fine can in fact be dirty.

We have two choices, she concluded:

And that, interrupted Stewart gleefully, "is socialism."

The audience roared with laughter, but Stewart added wistfully that Warren made him feel better.

"I don't know what it is that you did just there," he said, "but for a second, that was like financial chicken soup for me."

Apparently, she had that effect on a lot of other people too.

Love her or hate her — and lots of people do each — it was clear she knew how to talk to people, to offer solutions. She was no longer the puking, petrified professor in the backstage bathroom. A star was born.