Accessibility links
God Only Knows: #IfTrumpwereEvangelical And #MethodistHillary Amid rumors and questions about the religious faith of both major parties' presumptive presidential nominees, a pair of hashtags is born. 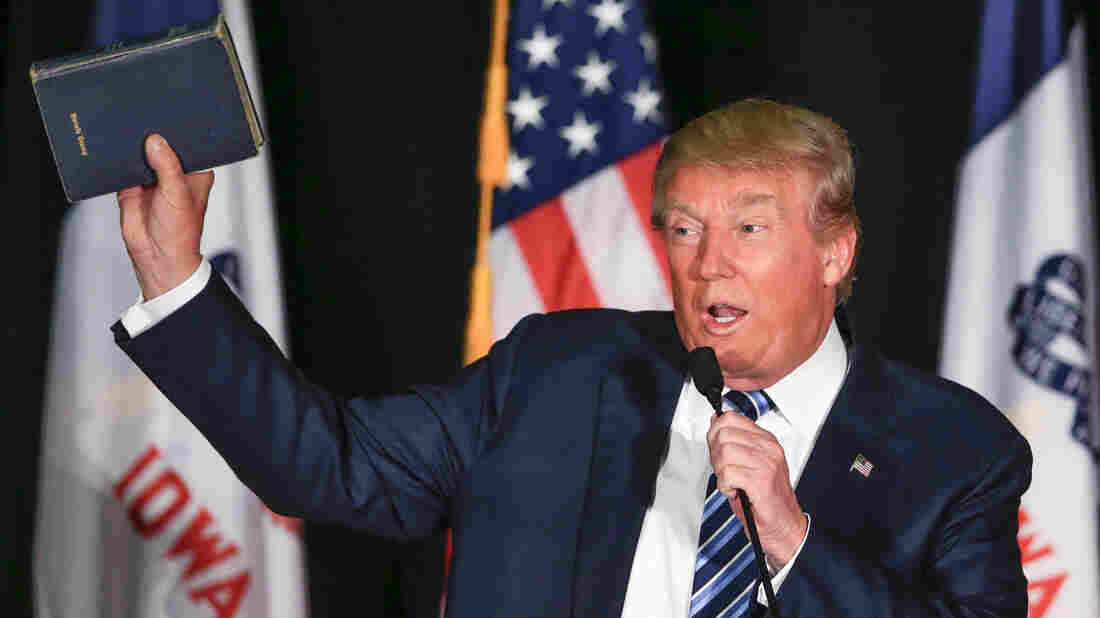 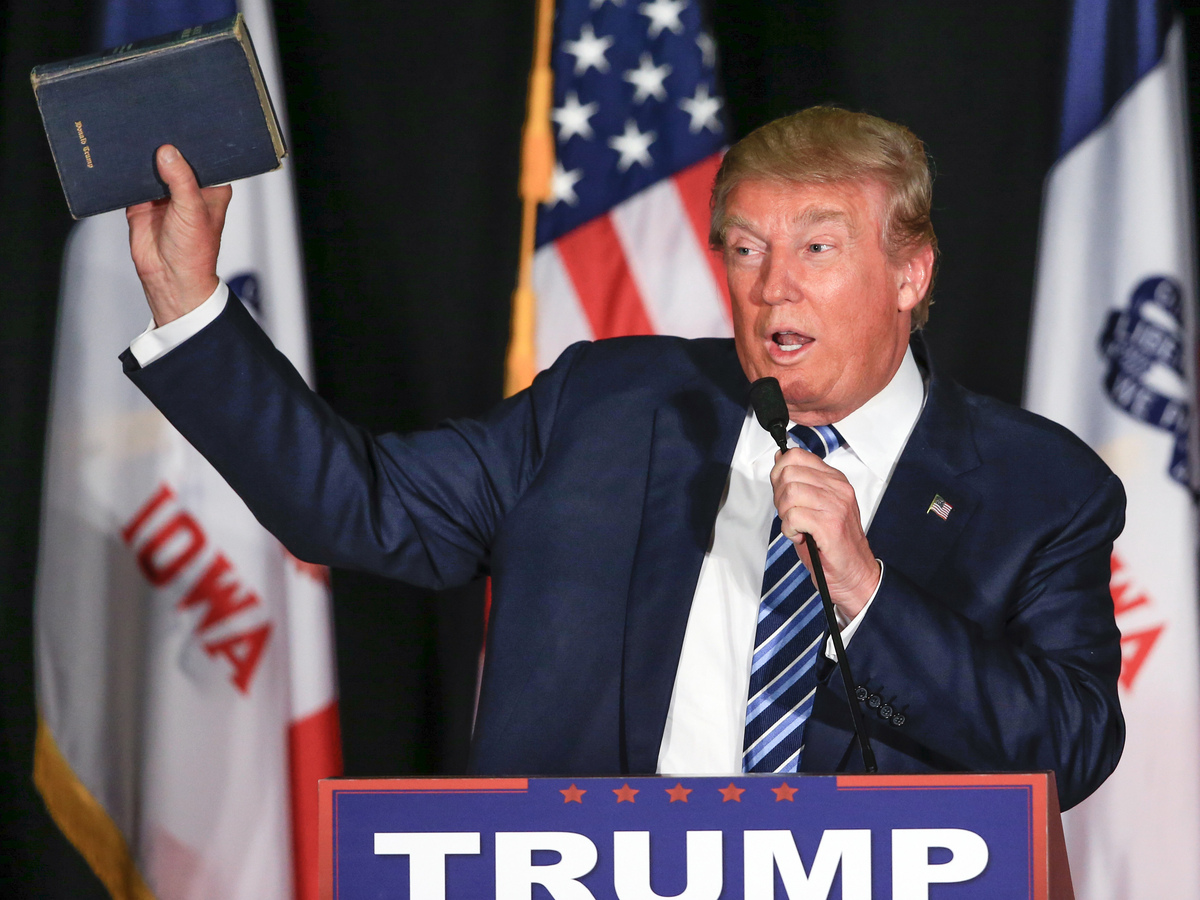 As much as Americans believe in the separation of church and state, they also seem to believe in electing presidents who go to church. But there are lurking questions in some voters' minds about the religious faith of both major parties' presumptive nominees – and the Internet has helpfully spawned a pair of hashtags – #methodisthillary and #iftrumpwereevangelical.

The tweets poke fun at the candidates, at religion, and often both. For example, this tweet expertly uses the Bible to take aim at Trump's famous locks:

There are lots of inside jokes that will be funnier if you're at least familiar with evangelicalism, like the practice of promising to save sex for marriage and wearing a "purity ring":

They're more popular among girls, and often gifts from their fathers...

#iftrumpwereevangelical Ivanka's purity ring would have been the hugest.

This tweet skewers the advice young women are often given to dress modestly:

Then there's this joke that deftly weaves together religion and politics with a reference to the habit some conservative Christians have of naming a close friend to motivate them to read the Bible and avoid sin - kind of like a workout buddy for faith: 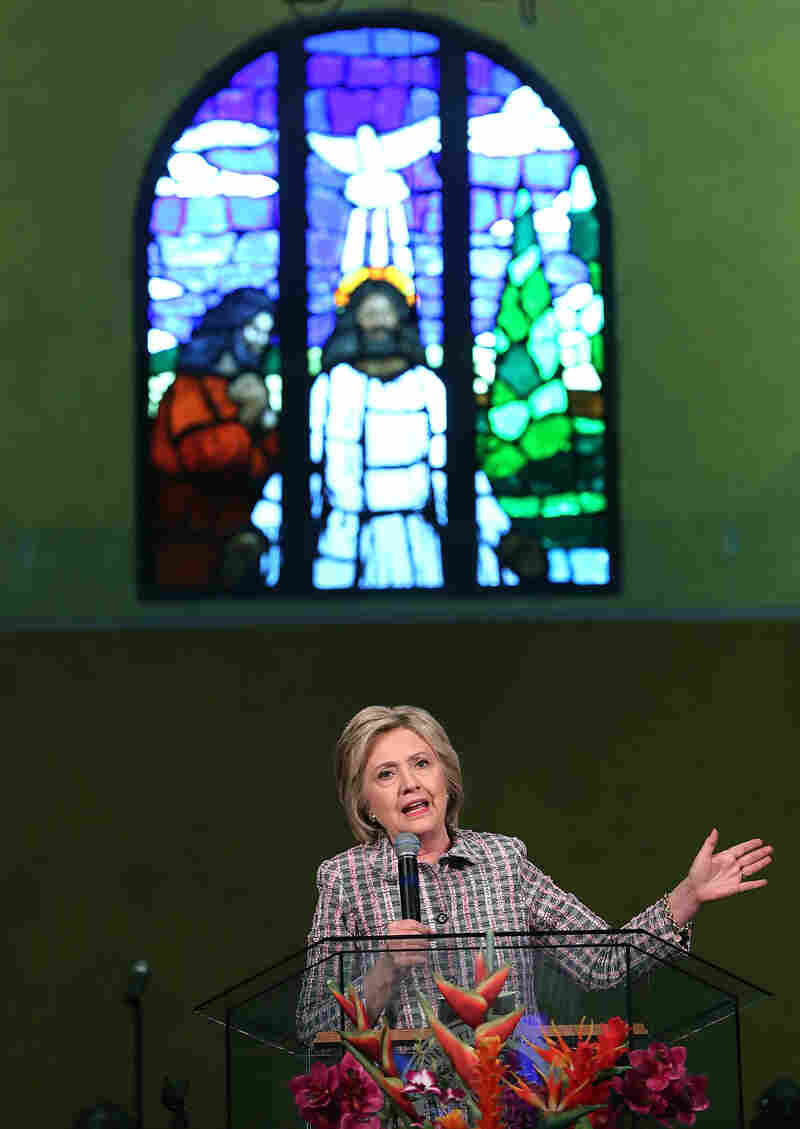 It all started with Donald Trump's closed-door meeting with hundreds of evangelicals in New York on June 21, where he questioned rival Hillary Clinton's faith during a private conversation with a few dozen select Christian leaders. According to a video posted to Twitter, Trump told the group they don't know "anything about Hillary in terms of religion. You know, she's been in the public eye for years and years, and yet there's no, there's nothing out there, there's, like, nothing out there."

Clinton has spoken publicly multiple times about her Methodist faith, which she says has guided her life.

Whatever is in Trump's – or Clinton's – heart, the #iftrumpwereevangelical hashtag helpfully gave birth to the #methodisthillary hashtag, which pokes fun at stereotypes of sturdy Midwestern mainline Protestants.

In the spirit of #iftrumpwereevangelical comes super #MethodistHillary. She wants your vote but also that casserole recipe.

There are references to quirky church music...

#MethodistHillary's only regret about her time in the Senate is that she could have probably served on a few more committees.

...and this smart reference to the founder of Methodism, John Wesley, with a nod to Clinton's famous struggles to connect with voters on the campaign trail:

Trump was raised Presbyterian, but as of last year was described as an inactive member of his church. During his meeting with evangelicals, Trump referred to his church attendance in the past tense – a major faux pas in a crowd that sees going to church regularly as a critical component of a vibrant faith.

Within days, Dr. James Dobson, the founder and erstwhile leader of the evangelical group Focus on the Family, was describing Trump as a "baby Christian." Dobson had previously endorsed Texas Sen. Ted Cruz and had said he "could not support" Trump.

Dobson told a Pennsylvania pastor that Trump had recently become a "born-again Christian."

The report of Trump's conversion prompted some skepticism in evangelical circles – as well as a few jokes.

It wasn't long before Dobson walked his comments back, issuing a statement saying that "only the Lord knows the condition of a person's heart," and adding that he'd heard televangelist Paula White "personally led [Trump] to Christ." That generally involves saying a prayer of repentance from sin and accepting Jesus Christ as one's Savior from eternal damnation.

If true, it would be a big shift for Trump, who last year astonished many conservative Christians by publicly telling a pollster that he has never asked God for forgiveness. Trump campaign spokeswoman Hope Hicks has not responded to a request from NPR to clarify how Trump currently describes his faith.