Accessibility links
Prohibition-Era Gang Violence Spurred Congress To Pass First Gun Law In the 1930s, criminals with portable machine guns unleashed a torrent of violence that often caught civilians in the crossfire. The violence led to a tax and registration scheme still in effect now.

Out of the tragedy in Orlando, the deadliest mass shooting in recent American history, something shifted in Washington.

First, Sen. Chris Murphy, D-Conn., and more than 30 of his colleagues held the Senate floor for nearly 15 hours.

Then there was a daylong sit in by members of the House — with a pledge to continue the fight when the House reconvenes after the July 4 recess.

There was a lot of political will, too, after the Sandy Hook Elementary School shooting in 2012. 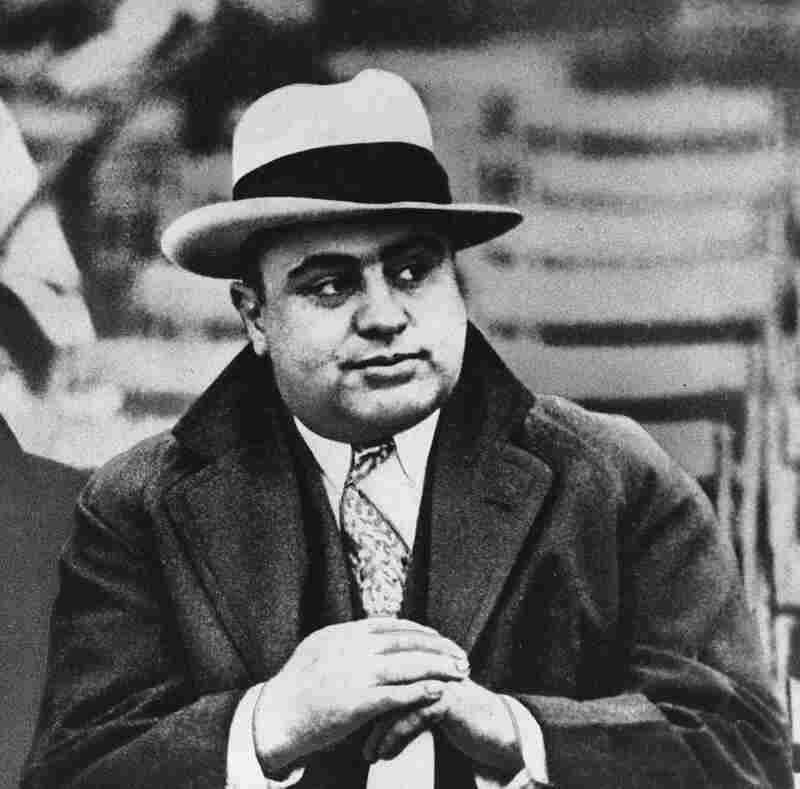 The trade in alcohol — illegal under Prohibition — led to the rise of organized crime and men such as Chicago gangster Al Capone, photographed here on Jan. 19, 1931. AP hide caption 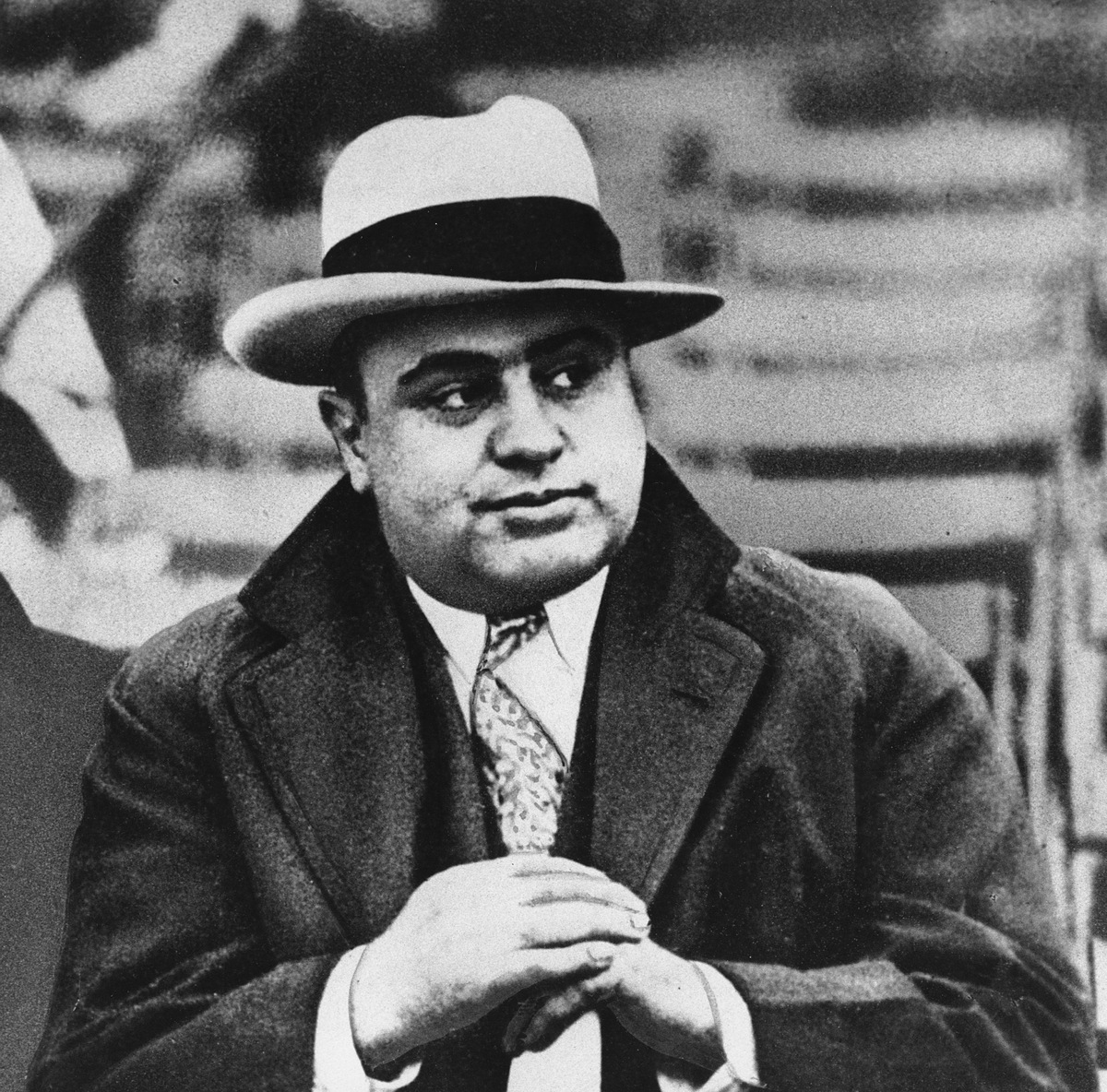 The trade in alcohol — illegal under Prohibition — led to the rise of organized crime and men such as Chicago gangster Al Capone, photographed here on Jan. 19, 1931.

But in the end, no new federal gun laws were passed.

There was, however, a moment in history when Washington did act on the issue. But it wasn't after a single event.

In the 1920s and '30s, the U.S. was dealing with a different kind of gun violence epidemic: a massive increase in organized crime, fueled by Prohibition.

Gangsters, like Al Capone, were making big money trafficking illegal alcohol. And a key weapon in their arsenal was the machine gun.

"Those criminals from the mob took advantage of the rise of the portable machine gun, capable of firing multiple rounds of ammunition with the single pull of a trigger," says Adam Winkler, a professor at UCLA's school of law and author of Gunfight: The Battle Over The Right to Bear Arms in America.

'The Menace Of Promiscuous Killings'

Newsreels from the period chronicled the violence. In one from 1931, footage shot in New York shows walls along a city street pockmarked with bullet holes, and the children caught in the crossfire of gang warfare.

"Here is Samuel Davino, only 5 years old, pointing to where he was shot in the leg by gangland's ruthless gunmen," the newsreel narrator says. "But poor little Samuel is more fortunate than Michael Vengali, also 5. Michael met death. And this casket will hold his tiny body, broken by machine gun bullets."

Franklin Delano Roosevelt was the governor of New York at the time; it's the office he held just before becoming president. And the experience of having these events unfold on his watch stayed with him. 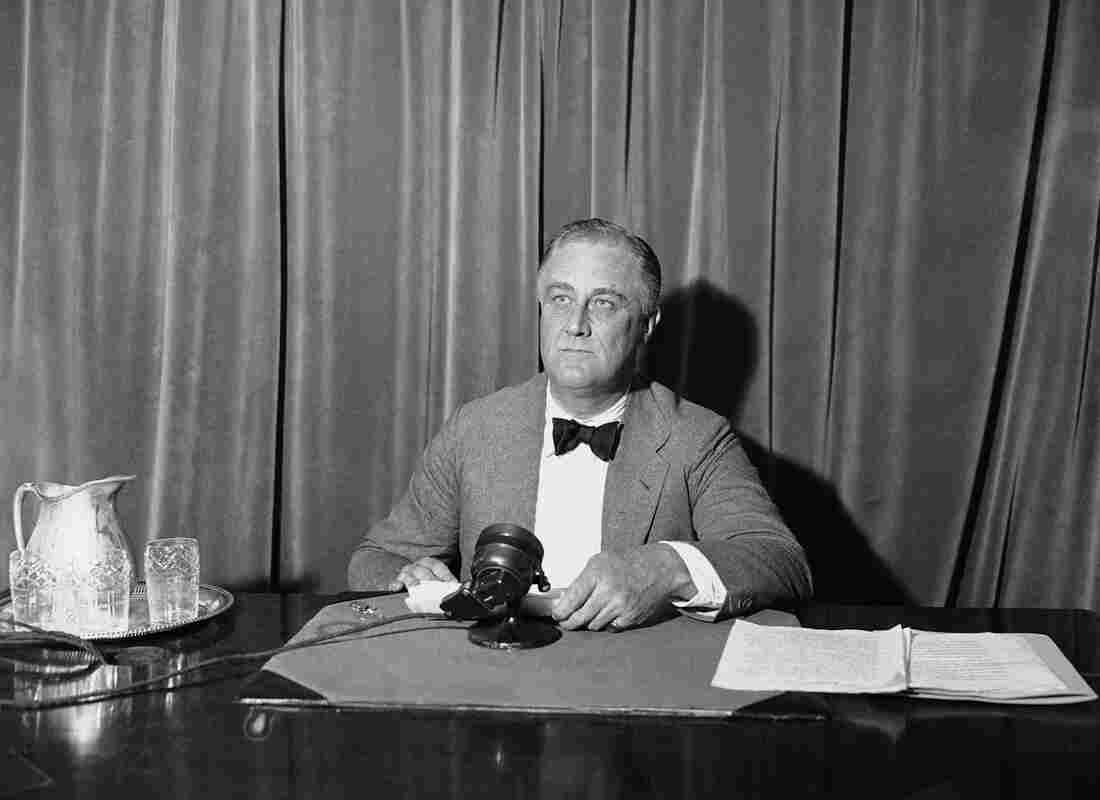 President Franklin D. Roosevelt (shown here delivering one of his "Intimate Talks" to the nation in 1934) helped push through the first firearms law in the U.S., a tax and registration scheme of fully automatic weapons. AP hide caption 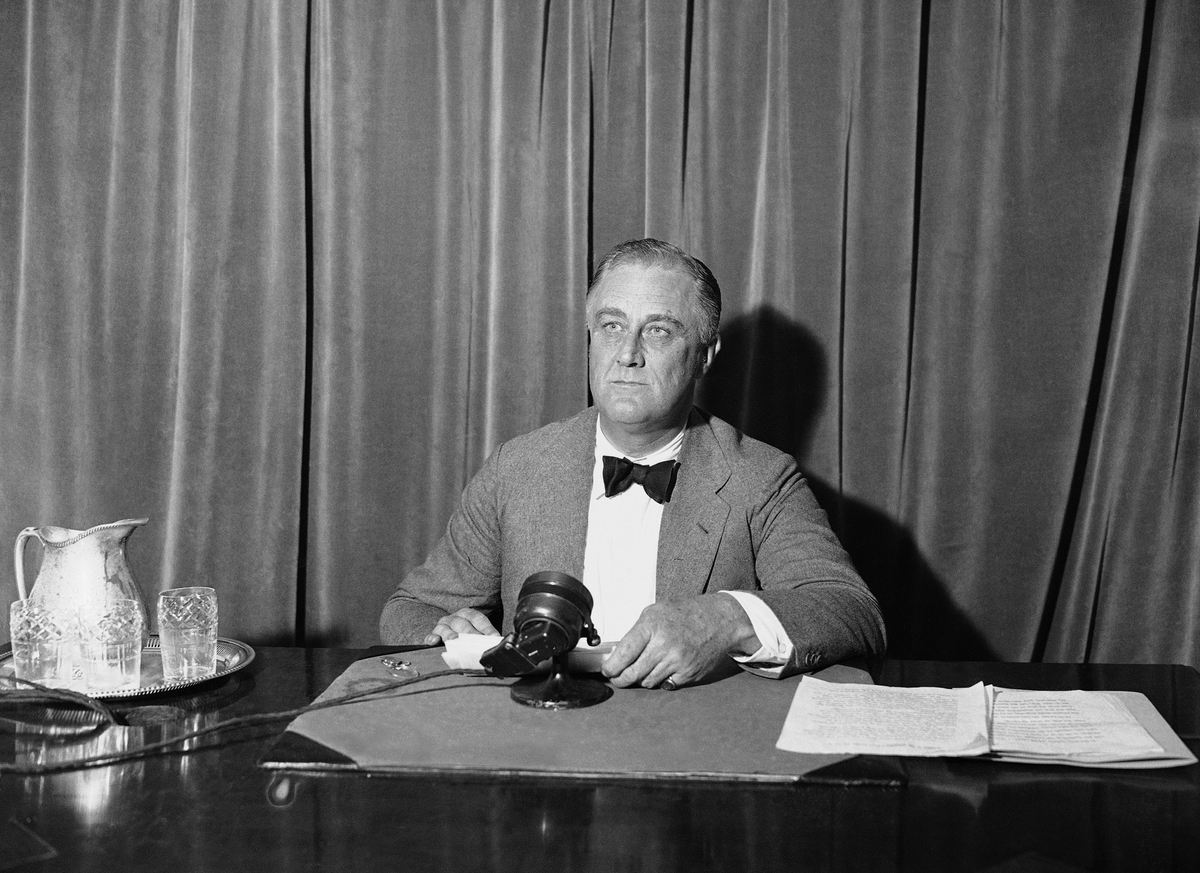 President Franklin D. Roosevelt (shown here delivering one of his "Intimate Talks" to the nation in 1934) helped push through the first firearms law in the U.S., a tax and registration scheme of fully automatic weapons.

When Roosevelt became president in 1933, his fellow Democrats controlled both the House and Senate by substantial margins, and there was already momentum to do something to rein in guns.

For instance, Sen. Royal Copeland, a Democrat from New York, was promoting a federal ban on the sale of fully automatic guns.

"We can never be free from the menace of promiscuous killings until the possession of firearms is everywhere restricted to persons of known character," Copeland said. "To this end I shall press my bill for passage through the United States Senate."

There was talk in Washington of an outright ban on fully automatic weapons. But Roosevelt was wary of that — not because of the Second Amendment, but because of the Interstate Commerce Clause. The Supreme Court had already imposed strict limits on the ability of Congress to regulate commerce.

Instead, Roosevelt backed a tax and registration scheme known as the National Firearms Act, which the president signed into law in 1934.

It applied to short-barrel shotguns and rifles, and to fully automatic weapons like machine guns.

And it was supported by the National Rifle Association.

How The National Firearms Act Of 1934 Worked

Winkler, the author and UCLA law professor, notes that when the then-president of the NRA, Karl Frederick, was asked to testify before Congress, he said "he had not given any thought to the question about whether a federal gun control law would violate the Second Amendment."

Elsewhere, Winkler says, Frederick wrote that "protection for firearms does not come from the Second Amendment, it comes just from wise public policy."

The Thompson submachine gun, or Tommy gun, was the first portable machine gun — and a favorite of Prohibition-era criminals.

And a core part of the policy the NRA supported was a tax of $200. That might not sound like a lot. But adjusted for inflation, it's approximately $3,500, Winkler says.

And this was in the 1930s, during the Depression.

"The $200 tax was not meant as just a tax, it was meant to discourage people from purchasing these firearms, and it was a tool to use against criminals who would illegally purchase the gun but wouldn't pay the tax," Winkler says.

Someone who was caught violating the National Firearms Act faced a much bigger monetary fine — $35,000, adjusted for inflation — and jail time.

Of course there were court challenges; ultimately, at the Supreme Court, in the case of United States v. Miller.

That case involved the prosecution of two men with criminal records who were caught with an unregistered and untaxed short-barreled shotgun.

The court decided unanimously to uphold the law. It said that a short-barreled shotgun was not the type of weapon that someone serving in a state militia would ordinarily have, Winkler explains — and thus was not protected by the Second Amendment.

How Effective Was The Law?

The National Firearms Act is still in place today. If anything, the law is stronger today than when it was originally passed.

By the 1960s, it was illegal to import these guns. And by the '80s, new manufacture for civilian use was outlawed, too.

Today, the machine guns that are legal to sell are old — and there is a fixed number of them. As a result, they are expensive, costing in the tens of thousands of dollars.

Those who do wish to purchase one must pass an extensive background check — including submission of a photograph and fingerprints — as well as fully register the firearm, and receive written permission by the Bureau of Alcohol, Tobacco, Firearms and Explosives before moving the firearm across state lines. Then of course, there's the tax — which remains $200.

The guns covered by this law are almost never used in crime.

Mark Follman tracks gun violence for Mother Jones, where he is the national affairs editor.

"You rarely hear any discussion of fully automatic weapons or machine guns," Follman says. "They're just really not part of the conversation in the contemporary picture. They don't turn up in mass shootings."

Follman curates a database of mass shootings in America, going back 34 years, to 1982. It covers a total of 81 mass shootings. Out of those 81 shootings, none is known to have involved a machine gun or fully automatic weapon.