Accessibility links
Can You Really Rebuild Tarzan Out Of Whole (Loin) Cloth? The Legend Of Tarzan tries to reinvent the story as an indictment of colonialism, but it lacks the wit or liveliness of the Tarantino revisionist histories it seems to be trying to emulate.

Can You Really Rebuild Tarzan Out Of Whole (Loin) Cloth?

Can You Really Rebuild Tarzan Out Of Whole (Loin) Cloth? 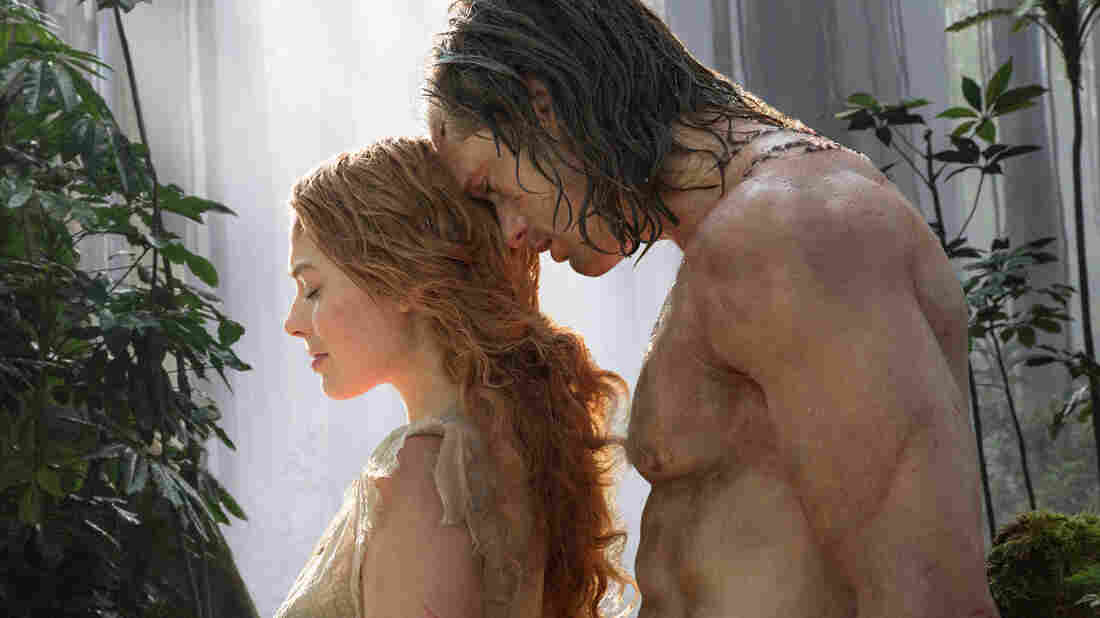 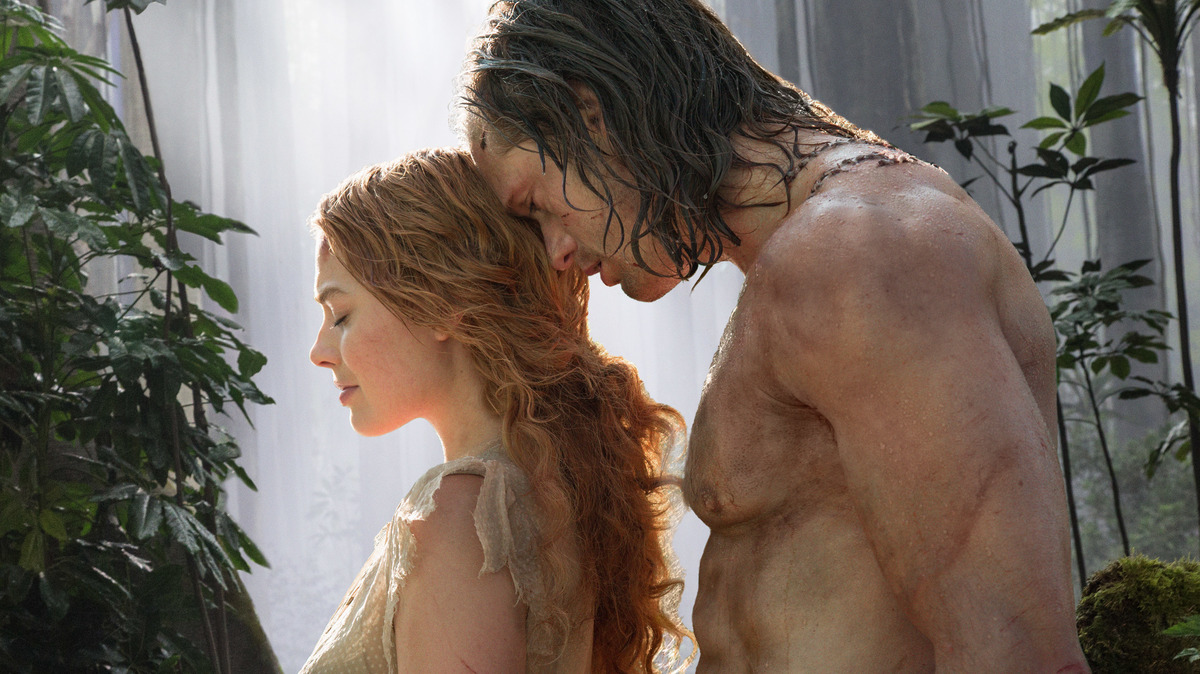 Margot Robbie and Alexander Skarsgard in The Legend Of Tarzan.

Edgar Rice Burroughs published the first of his Tarzan stories in 1912, just four years after, as the opening title cards of the long-in-development The Legend Of Tarzan inform us, Belgium's King Leopold II was forced to cede control of the so-called "Congo Free State" to the Belgian Parliament. He'd spent the prior couple of decades enslaving millions of residents of the Congo and using their forced labor to extract the region's rubber, diamonds, and other resources for his personal enrichment.

Film versions of the Tarzan story have numbered in the hundreds, the earliest ones arriving almost a decade before the movies got recorded sound. Clearly, you can't drop a $200 million-ish new gloss of this archaic material without some nips and tucks, by which I mean a top-to-bottom existential rethink. And so screenwriters Craig Brewer and Adam Cozad have retconned the story as a who-could-argue indictment of colonialism, and made Margot Robbie's Jane — so often a hostage — a head-butting, lock-picking, quip-making Marion Ravenwood type. (Still a hostage, though.)

The filmmakers even attempt to dodge the material's in-built White Savior problem by casting Samuel L. Jackson as journalist and historian George Washington Williams, who began reporting on the atrocities committed by Leopold's "Force Publique" in 1889. A Pennsylvania-born veteran of the Civil War who later enlisted in the Mexican army to fight the French, Williams fears the genocide of "Indians" (his word) in his home country is about to be repeated in the Congo.

Historical spoiler: He was right — not that you'd know it from this movie's deeply confused finale. Maybe the presence of both Jackson and Christoph Waltz (as Force Publique commander Leon Rom, the Darth Vader to Leopold's Emperor Palpatine) should've tipped us off that this Tarzan aspires to Taratinoesque revisionism in the gushing vein of Inglourious Basterds or Django Unchained. It's probably impossible for any movie this costly to carry a trace of those films' verve or wit — this one sure doesn't, though it's competent and sometimes better. The director is David Yates, a no-fingerprints studio guy who made installments 5-8 in the Harry Potter film series. (His adaptation of J.K. Rowling's Fantastic Beasts and Where to Find Them comes out in November.)

Anyway: Jackson is a marvelous actor who's been known to phone it in sometimes, but he's very strong here, acting as the audience surrogate as he huffs and puffs to keep pace with Tarzan's superhuman feats of athleticism. (Fair enough: Jackson is 28 years older than anyone else on the side of the angels.) His Williams is no mere sidekick; in fact, he's the entire reason Tarzan returns to Africa, and he saves Tarzan's extra-extra-lean bacon several times.

The movie is lean, too: Yates doesn't waste 45 minutes on the hero's origin, which helps keep the run time under two hours. There are me-young-Tarzan, you-young-Jane flashbacks, but they're economical by superhero-movie standards. Instead, we open en media res: Tarzan, née Lord Greystoke — melancholy Alexander Skarsgård, whose impressively feral physique might be the movie's only non-digital effect, but then again, it might not be — has been living a "civilized" existence in London as John Clayton III for a few years, married to Jane, a schoolteacher. As a famous member of the House of Lords, he's invited to observe Leopold's quasi-humanitarian improvements — like the railroad that speeds boxcars full of severed tusks across the country. He's disgusted: "You don't want to lose your place at the trough," he tells his colleagues when they pressure him to accept.

But Williams appeals to "John" to go and bring him along, so the journalist will have a plausible cover to investigate Leopold's abuses. With perhaps anachronistic — what's that word? — agency, Jane overrules her husband's objections and says she's coming, too. Little do our heroes know that Rom, in what's become a too-familiar mustache-twirling groove for Mr. Waltz, has made an arrangement with Tarzan's old enemy Chief Mbonga (Djmon Hounsou, whose leopard-skin battle dress uniform is the movie's coolest costume by far). Adventure, and vine-swinging via conspicuously blurry pixel-beings, ensues.

In the days when Olympic swimmer Johnny Weissmuller filled the loincloth, the films were shot on backlots, with location footage (often shot for other movies) spliced in. The most recent live action iteration to become a hit, 1984's (deep breath) Greystoke: The Legend of Tarzan, Lord of the Apes, went for vérité and grandeur, filming on location in Cameroon and Scotland. But the wheel of time has spun back 'round to the lot: Though some backgrounds for Tarzan '16 were filmed in Gabon, everything involving the actors was shot at Warner Bros. Studios, Leavesden, almost two years ago. It takes a long time for digital animators to click a jungle in around you, apparently.

If the film sometimes feels like it's set on planet Pandora, the animals (100 percent CGI, say the film's production notes) — lions, elephants, and the gorillas who raise Tarzan from infancy after killing his dad — are astonishingly lifelike, if animated for maximum majesty. It's odd that the creatures look so real while the digital landscapes, particularly of the ships arriving in the Port of Boma in the picture's third act, have a hazy, diffuse appearance. Game of Thrones' digital armadas look more authentic.

Those ships, by the way, are carrying thousands of mercenaries, who've been imported to solidify Leopold's death-grip on the locals. They're still there as the credits roll, just sitting in the harbor after their commander maybe does or maybe doesn't get dispatched by a deus ex gorilla.

I'm not saying, but I will tell you this: The real-life Leon Rom lived until 1924, and is cited as a likely inspiration for the character of Kurtz in Joseph Conrad's imperialism-probing novella Heart of Darkness. Maybe the general-population screenings will feature a post-credits sequence where all those hired vikings agree to turn around peacefully and sail home. But the historical record is of little comfort on this point. No wonder we prefer fiction.

In a previous version of this story, we incorrectly said Joseph Campbell wrote Heart of Darkness. The author is Joseph Conrad.