Accessibility links
Overlooked But Undeterred, At 101, Artist Carmen Herrera Gets Her Due Carmen Herrera was making art in the '50s and '60s but her male counterparts were getting all of the attention. Now, she's still hard at work and finally getting some long overdue recognition. 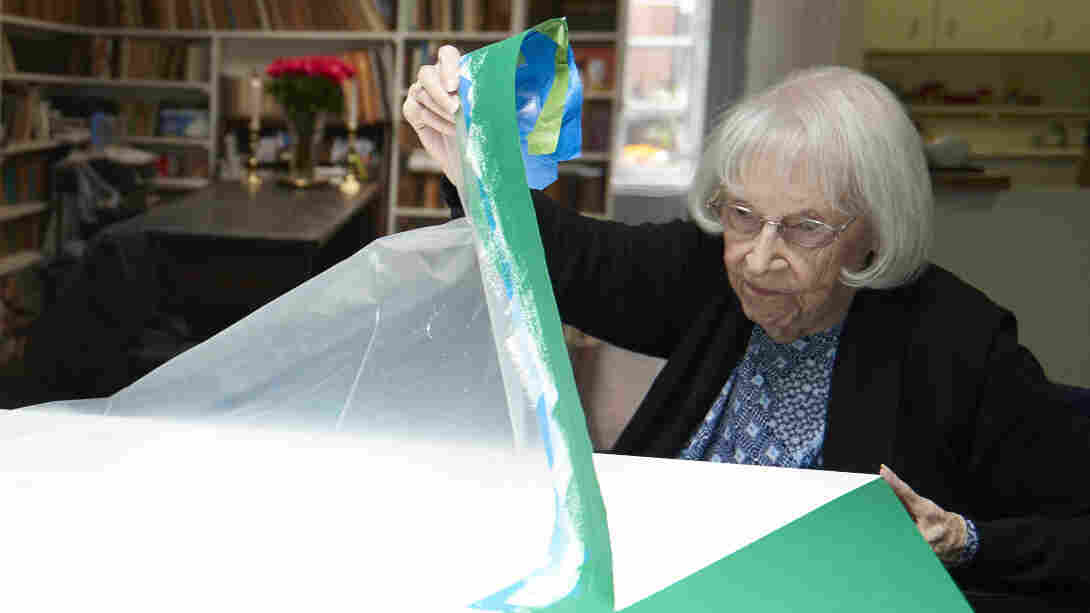 Back in the 1950s and '60s, Carmen Herrera was making art, but her male counterparts were getting all of the attention. Now, at 101, she's still hard at work, and finally getting some long overdue recognition. Lisson Gallery hide caption 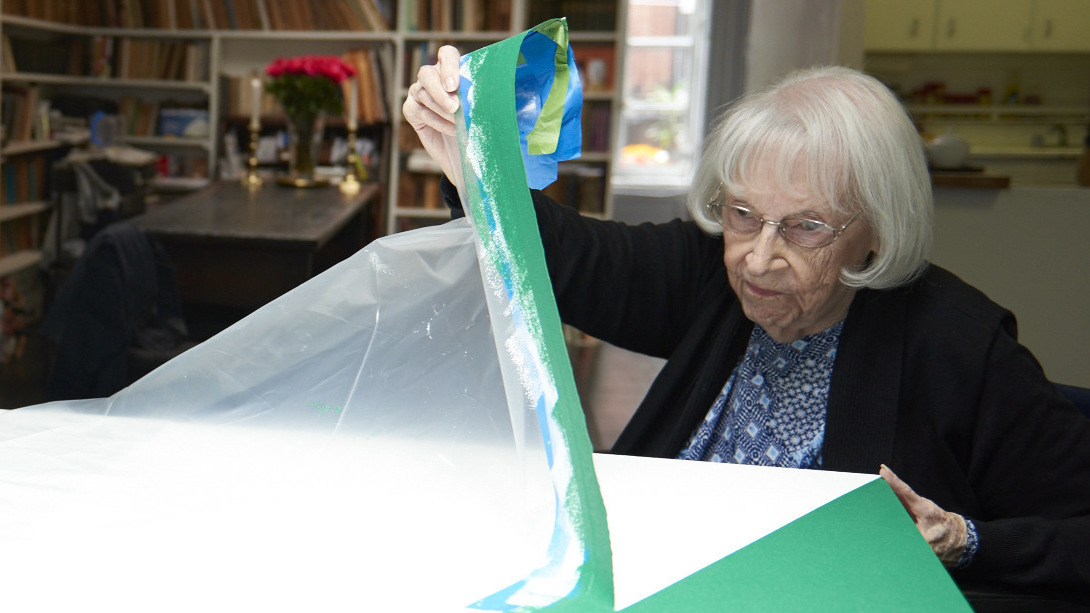 Back in the 1950s and '60s, Carmen Herrera was making art, but her male counterparts were getting all of the attention. Now, at 101, she's still hard at work, and finally getting some long overdue recognition.

For most of her career, Carmen Herrera's paintings of brightly colored geometric shapes went unnoticed, while her male counterparts — Barnett Newman, Ellsworth Kelly and Frank Stella — got plenty of attention for similar work. Herrera finally made her first sale at 89. And now, at 101, it seems she's getting her due at last. The Cuban artist's work can be seen at the Tate in London, MoMA in New York, and she has an exhibition coming to the Whitney Whitney Museum of American Art in September.

Tears streamed down Herrera's face as she viewed her art on display at a recent show at the Lisson Gallery in Manhattan. The 13 paintings and one sculpture were her first solo exhibition in the U.S. in nearly 10 years.

"It helps that they recognize you — that your work is not going to go to the garbage," Herrera says.

That's kind of a surprising statement considering that in the 1940s, Herrera was exhibiting her work next to Piet Mondrian, and was part of a community of artists in Paris exploring the boundaries of painting and sculpture. Other artists who found acceptance and a reputation in Europe also languished in the U.S., but Herrera, who is not much of a self promoter, had more working against her, says Alex Logsdail of the Lisson Gallery.

"I think it's partly because she's a woman," he says. "I think that also in the '60s and '70s being a Cuban woman was particularly complicated. She very much sees herself as an American artist given that 75 years of her life has been spent outside of Cuba."

Herrera rejects all the labels. Cuban? "I will never go back," she says. Woman? "They hated the idea of a woman making it, but it happened!" Older? "I have waited a long time, but you're here now," she says.

Over the course of her seven decade career, Herrera has played with variations on straight lines. "I get a pleasure from doing it," she says. Lisson Gallery hide caption

Hererra kept working because she felt compelled to make art — and she'd rather people focus on that. "I'm just an artist, that's all," she says.

Every morning, after a café con leche, Herrera sits at her work table, at one end of the loft she's lived in for 50 years. A neat row of colored marking pens is on the table — red, yellow, blue, black and green. She uses them to fill in the geometric shapes she draws on vellum graph paper, sometimes cutting them up and moving them around. Later, with the help of an assistant, the drawings are amplified to fill canvases larger than the artist. For the past seven decades, Herrera's been figuring out variations on the straight line. 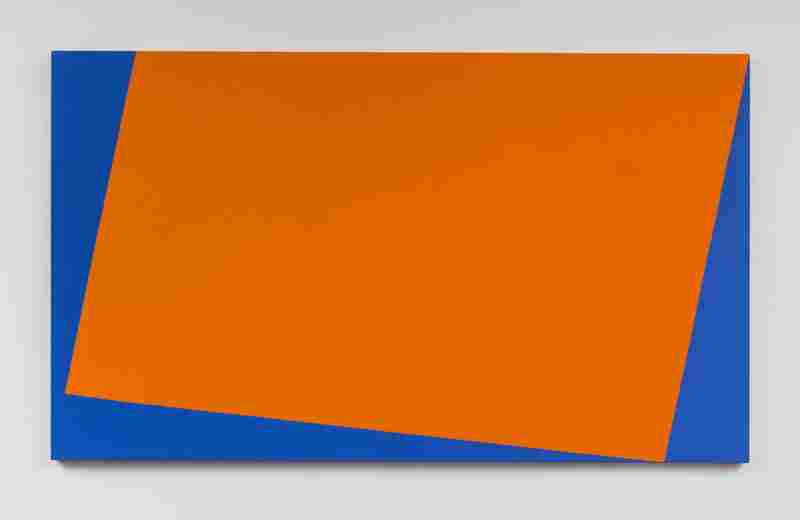 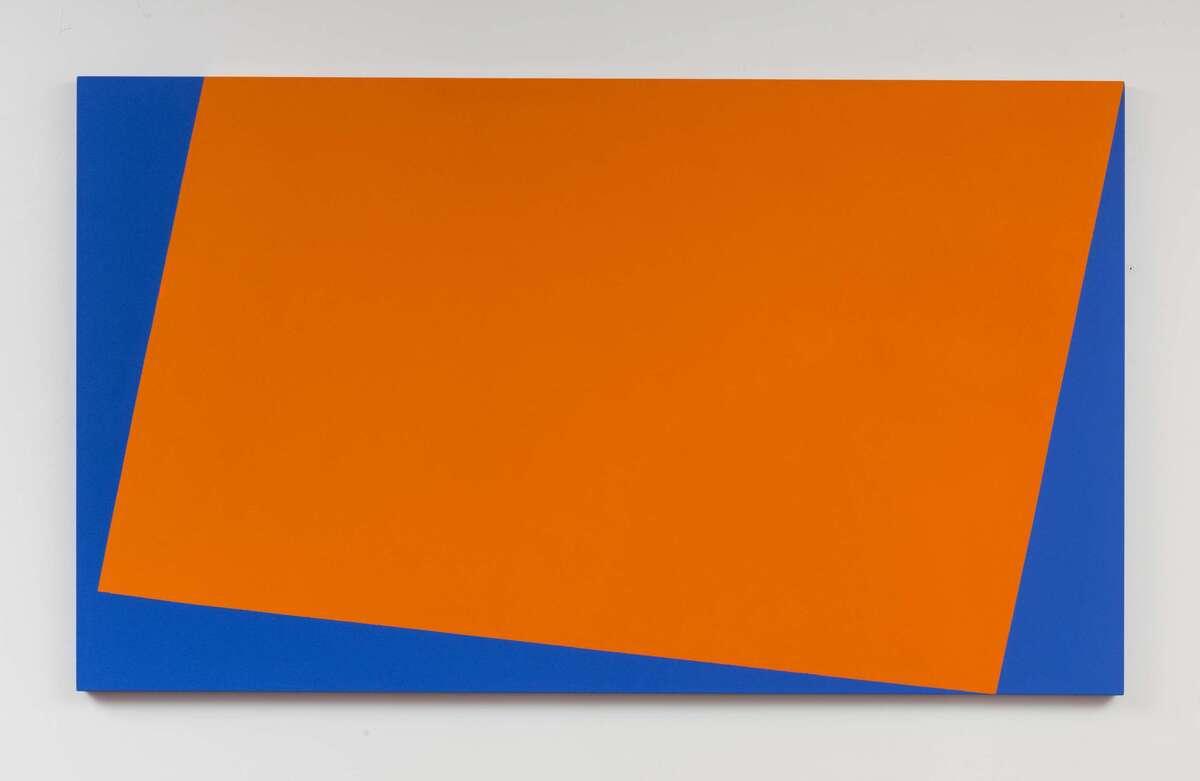 Whitney curator Dana Miller says that by limiting her colors and using a key set of forms, Herrera "liberates herself to go deep."

"I'm still looking for it! ...This is done with pleasure," she says.

One of the pieces in the Lisson show was a painting seven feet square, formed of three equal sections. Many of Herrera's paintings are either diptychs or triptychs. The background is white, and three cobalt blue rectangles descend from the top edge and three poke up from the bottom. They are offset from each other. There's a sense of movement in the stillness and the hint of a joke about upsetting expectations.

"There's always something that's a little off that kind of makes you look again and look more carefully," says artist and MacArthur Fellow Teresita Fernández. A friend and admirer of Herrera, Fernández was born in America to Cuban parents, and she, too, rejects the labels.

"She's still looked on in isolation as a kind of anomaly," Fernández says. "And I do think that some of the innovations in her work must have influenced some of her contemporaries. How do we know that Barnett Newman was not influenced by Carmen?"

Herrera continues to push herself, says Dana Miller, curator of the upcoming show at the Whitney. In fact, she thinks Herrera is more inventive than many artists a fraction of her age. By limiting her colors and using a "key set of forms," Herrera "liberates herself to go deep," says Miller.

For a still-working artist who made her first sale at the age of 89, having two shows in the same year is a vindication. (Even, if it may be — as Herrera says with a laugh — a little "embarrassing").