Accessibility links
Not My Job: How Much Does Producer Norman Lear Know About Learjets? There was a time in the 1970s when the most-watched TV shows all had one thing in common: They were produced by Norman Lear. We've invited him to play a game that has nothing to do with any of that. 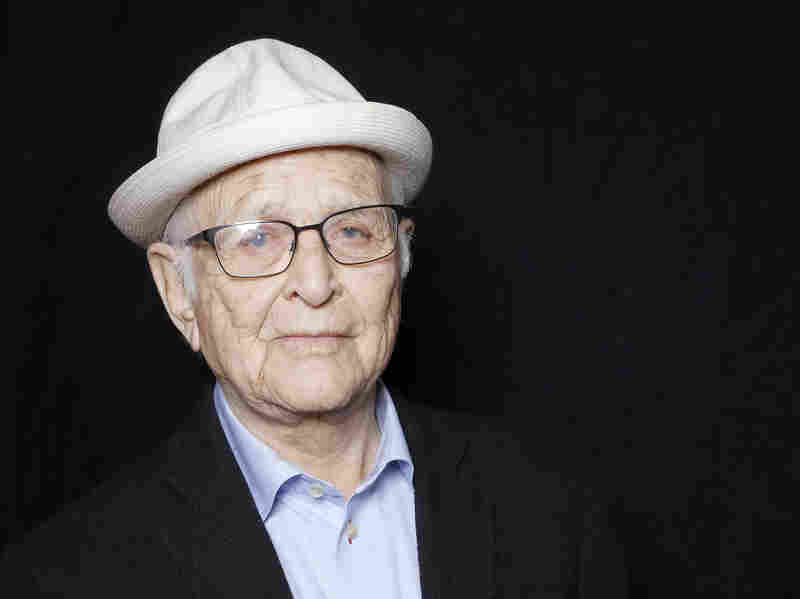 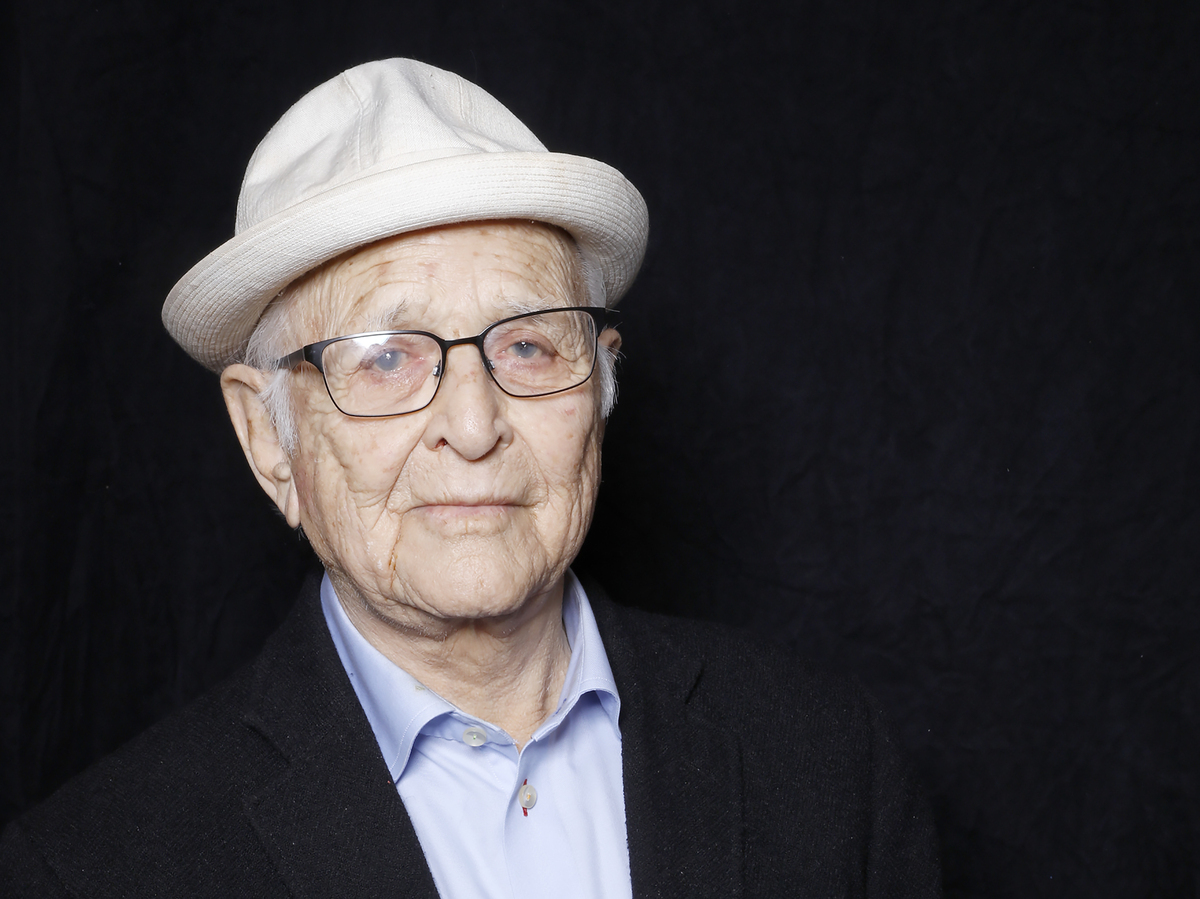 There was a time, around 1975, when all the most-watched TV shows — All in the Family, Maude, The Jeffersons, Good Times — had one thing in common: They were produced by Norman Lear. Now, at the age of 93, Lear is featured in a new documentary about his life and career called Norman Lear: Just Another Version of You.

Click the link above to listen as we quiz Lear on Learjets, the private planes that became the must-have accessory for the very rich starting back in the 1960s.

And now the game where people who have had a lifetime of success enjoy a few moments of something else. It's called Not My Job. There was a time around 1975, 1976 where all the most-watched TV shows - "All In The Family," "Maude," "The Jeffersons," "Good Times" and others had one thing in common. They were produced by one man, Norman Lear. He's the guy who saved TV from "The Flying Nun" and made it safe for "The Simpsons."

SAGAL: Ninety-three - there's a new documentary about his amazing life and career. We are absolutely thrilled to talk to him today. Norman Lear, welcome to WAIT WAIT... DON'T TELL ME.

LEAR: So far a pleasure to be here.

SAGAL: I know. Well, it's early yet. We'll see what we can do. I was one of the many people who grew up on "All In The Family" and all of your TV show, so it's like you programmed my childhood. I didn't understand many of the things that were happening, but it was still funny, which was kind of amazing. When you were doing all those shows, were you worried that some of the stuff would be going over your audience's head?

LEAR: No. I mean, not at all. What we were doing was dealing with subjects and problems and so forth that families everywhere were dealing with.

SAGAL: I remember saying to my grandmother what does that word mean? And she's like I don't know.

SAGAL: I do want to ask you 'cause I had I saw - there was a mention of this in your documentary - what was TV like before "All In The Family?" It was very silly, right?

LEAR: You know, it was - you know, "Flying Nun" and "Petticoat Junction" and "Beverly Hillbillies" and so forth. The biggest problem the average family faced might have been that the roast was ruined and the boss was coming to dinner.

LEAR: You know, for a long time, I heard people tell me hey pal, if you got a message there's Western Union. You don't use television.

LEAR: If that's the biggest problem America faces in the shows we mention...

LEAR: ...Then what is that message? The message is all right, no economic problems. There are no racial issues. Politically, everybody is happy. That was pretty wall-to-wall floor-to-ceiling message.

SAGAL: Right. I know on the other hand, if it were true that the worst problem we had was the roast was burnt and our boss was coming, that would have been great.

LEAR: Well (laughter) I just stole that. That was one.

SAGAL: So the quintessential TV dad was, like, you know, Fred MacMurray on "My Three Sons" or Ozzie and Harriet or all those guys. And you bring in Archie Bunker. And first of all, what did the networks say?

LEAR: The network - well, I'll tell you the biggest problem they had with the very first show.

LEAR: Archie and Edith were at church. It was a Sunday morning. It was their their 20th wedding anniversary. Mike and Gloria - that's the young couple - who were making a surprise brunch for them. And they came in - but first, before they came back back from church, which they left early because Archie hated the sermon, they - the young kids ran upstairs. They had the house alone for the first time, and then Mike persuaded Gloria to run upstairs with him. And they were going to make love. As soon as they get upstairs, the door opens and Archie and Edith walk in. He's carrying on about the minister and so forth. And the kids are gone. But they hear the door, and they come running down the stairs, buttoning up and such. And Archie says 11:30 on a Sunday morning.

LEAR: And the network said has to go. Now, we had been through all of his vocabulary and everything else - all of those arguments. But now it's the day that the show is going to go on the air, and they wanted that out.

SAGAL: Yeah, now, what did they want out? The indication...

LEAR: They wanted him - his line 11:30 on a Sunday morning - it had to come out. Why did it have to come out? Because that was making the audience think of what was going on upstairs.

SAGAL: Really? So you could have the actors coming downstairs buttoning up their clothes, indicating what they were doing. So what did you do?

LEAR: The show was on - or just about to go on in New York, it was three hours earlier in California - when I got a telephone call that said the line will in. Until that moment, I was saying take the line out in New York, and I won't be here tomorrow morning.

SAGAL: Really? You threatened to quit.

LEAR: Well, it wasn't as brave as it sounds. United Artists had offered me a three-picture deal to write, produce and direct.

SAGAL: So what the heck?

LEAR: What the heck?

SAGAL: So do you have any tips for those of us who would like to arrive at 93 as spry and as successful and happy as you are?

LEAR: What occurred to me first is two simple words...

LEAR: ...Maybe as simple as any two words in the English language - over and next.

SAGAL: Over and next.

LEAR: And we don't pay enough attention to them.

LEAR: When something is over, it is over...

DICKINSON: Oh my God, I love that.

LEAR: And if there were - there was to be a hammock in the middle...

LEAR: ...Between over and next, that would be what is meant by living in the moment.

DICKINSON: That is brilliant.

LEAR: I live in this moment.

SAGAL: Norman Lear, we have asked you here to play a game we're calling...

SAGAL: So you're Norman Lear, so we thought we'd ask you about Learjets, the famous private planes that became the must-have accessory for the very rich starting back in the '60s. Answer 2 out of 3 correctly, you'll win our prize for one of our listeners. Bill, who is TV legend Norman Lear playing for?

SAGAL: All right, so you ready to do this?

SAGAL: All right, here's your first question about Learjets. It is, in fact, about Bill Lear, the inventor of the Learjet. He was an amazing entrepreneur and inventor. He invented a lot of other things besides the jet, including what? A, the single-serve fruit-on-the-bottom yogurt cup, B, the 8-track tape player, or C, the silicone breast implant?

SAGAL: You're going to say that Norman Lear invented the silicone breast implant.

SAGAL: I always get you two confused...

SAGAL: ...Which is why my - the television shows I watch are terrible and my plane doesn't fly.

ADAM BURKE: Can we all appreciate that the 93-year-old knows who he was?

DICKINSON: Yeah, I love that.

SAGAL: Who's correcting whom? So you're going to say that Bill Lear, William Lear is the guy who created the silicone breast implant?

SAGAL: No. In fact, it was the 8-track tape player. It's true. It was a follow-up. He invented the first practical car radio.

LEAR: Yeah, that's what I thought. But every time I say it, it comes breast.

SAGAL: Funny how that works.

DICKINSON: You still got it. You got it.

SAGAL: Is that what you told the network censors? I meant to say what you wanted. It came out wrong. All right, you still have two more chances, Norman. Here we go. Mr. Lear was known for his sense of humor, much like you, I guess. And he once demonstrated his sense of humor by doing what? A, naming his daughter Shanda, as an Shanda Lear...

SAGAL: ...B, advertising a plane for his rich customers with windows that were specially treated so you couldn't see the poor far below you, or C, sewing in a whoopee cushion into the pilot seat on each new plane.

SAGAL: It's true. He has a daughter - still does. She's still around. Her name is Shanda Lear. Wikipedia says her full name is Crystal Shanda Lear, but I don't believe that.

SAGAL: All right, this is exciting. So if you get this one right, you win our prize. The Learjet became famous in the 1960s because Frank Sinatra bought one and flew all his Rat Pack friends around the world on it. Sinatra loved private jets. He would only fly in them, but he was a little weird about how he traveled.

He did which of these? A, he liked to dress as a flight attendant and served drinks, B, he stocked the galley with only canned franks and beans which he liked to eat cold, or C, he was actually terrified of flying so he had pictures of country roads taped to the windows?

SAGAL: You're going to go for C, that he actually was up in the air but he had pictures of country roads taped to the windows?

SAGAL: You're going to stick with that answer that...

SAGAL: Sadly, the answer was the canned franks and beans. Apparently, he was known for his simple tastes in food. He didn't want anything fancy. He just would sit there and eat canned food...

LEAR: I don't believe it for a second.

DICKINSON: That sounds quite nasty, trapped in a plane.

BURKE: Is there anything greater than sitting on a Learjet eating franks and beans listening to Frank Sinatra on an 8-track player?

KURTIS: Nothing better. Bill, how did Norman Lear do on our quiz? Norman got two wrong, 2 out of 3. But if we factor in his 93-year-old handicap, he's a winner.

SAGAL: Norman Lear is the television legend behind shows like "All In The Family," "The Jeffersons," "Good Times" and many others that you grew up loving. The documentary about Norman Lear's life "Just Another Version Of You" is out next week.

Norman Lear, thank you so much for everything you did and...

(SOUNDBITE OF TV THEME, "ALL IN THE FAMILY")

SAGAL: In just a minute, Bill Kurtis floats up, up and away. It's the Listener Limerick Challenge. Call 1-888-WAIT-WAIT to join us on the air. We'll be back in a minute with more of WAIT WAIT... DON'T TELL ME from NPR.