Accessibility links
#MemeOfTheWeek: Obama, Trudeau And Peña Nieto As The Three Amigos This week, the Internet looked at these three male leaders in the way it might look at women. That may be a good thing.

#MemeOfTheWeek: Obama, Trudeau And Peña Nieto As The Three Amigos

#MemeOfTheWeek: Obama, Trudeau And Peña Nieto As The Three Amigos 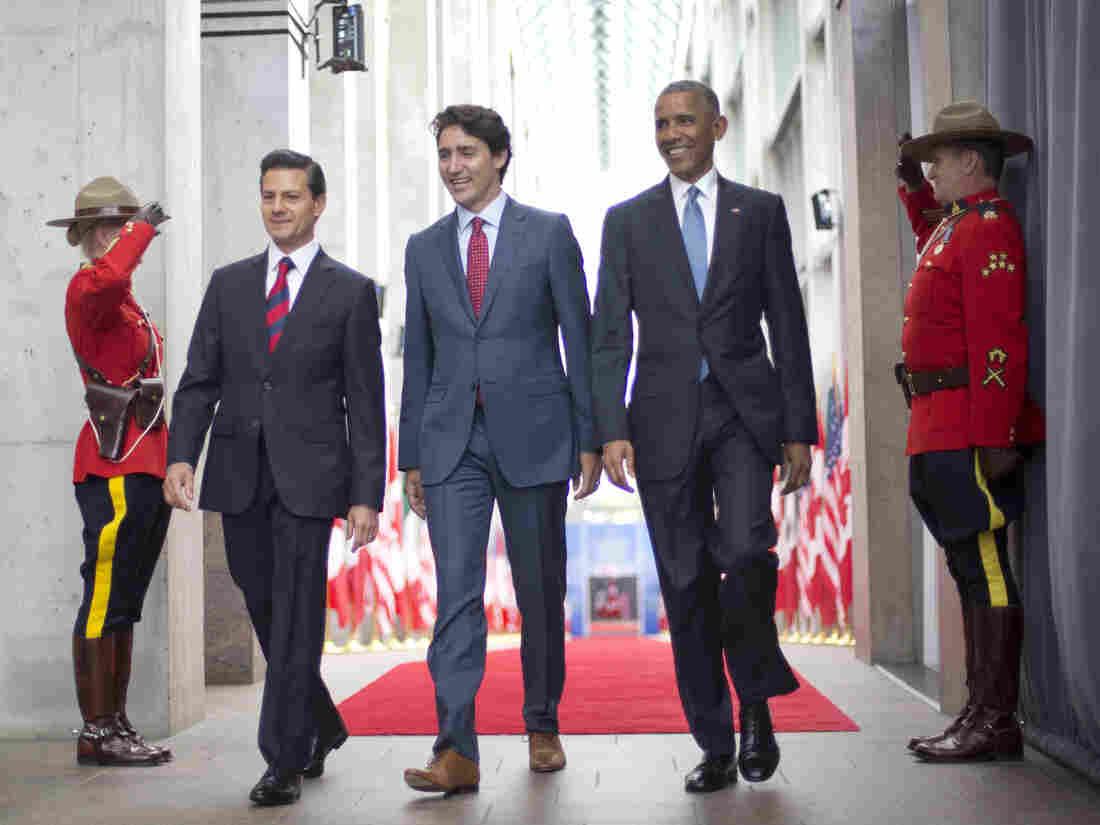 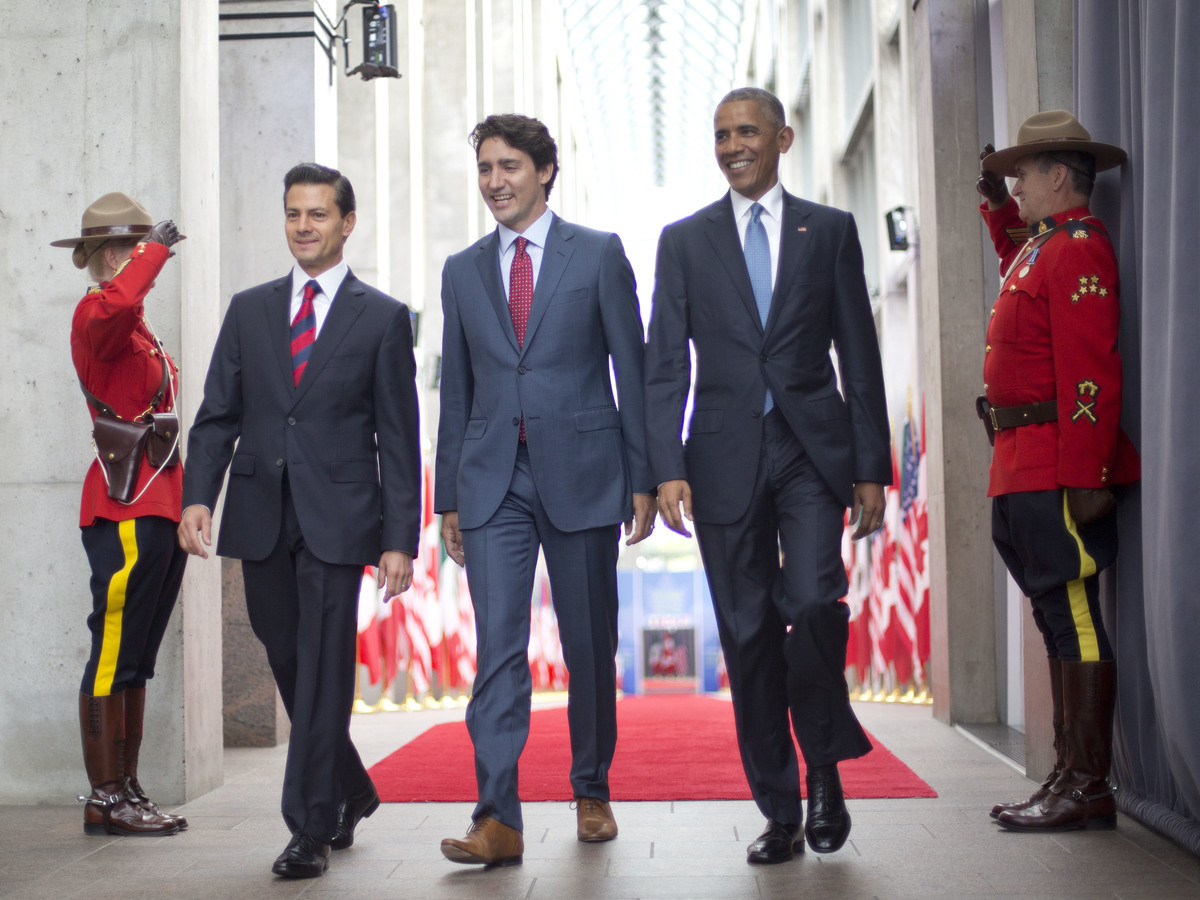 There are plenty of iconic trios — Larry, Curly and Mo. Robin, Maurice and Barry Gibb. Beyonce, Kelly and Michelle.

Add President Obama, Justin Trudeau and Enrique Peña Nieto to that list. This week at the North American Leaders Summit, the presidents of the U.S., Canada and Mexico became a full-fledged meme of beautiful, albeit awkward, proportions: the #3Amigos.

The comparisons were perhaps inevitable. As far as politicians go, the three are all fairly attractive men and they seem to like each other. And they set themselves up with a few moments that were just ripe for Internet playfulness.

There was the full-bodied strut past walls of flags earlier this week.

And then, of course, the awkward handshake.

When you thought it couldn't get any worse than #3amigos
It did. It's the 3 stooges.https://t.co/2gAk6C1xTG

But, how can anyone actually pull off a three-way handshake smoothly?

And there were other moments of bromance, with Obama and Trudeau laughing and joking in the Canadian Parliament, and the crowd gathered there even chanting "Four More Years!" as Obama finished a nearly hour-long speech.

The #3Amigos hashtag itself can be traced directly to the 1986 comedy "The Three Amigos," starring Chevy Chase, Steve Martin and Martin Short as a trio of cowboy movie stars from the silent era. In that film, the three were trying to be funny. This week, it could be argued that the political Three Amigos weren't necessarily going for the laughs, even if they ended up as butt of a few jokes.

The Three Amigos could also be seen as a sign of international unity on this side of the pond as Europe continues to plow through the drama that is Brexit. Of course, the unity between the U.S., Mexico and Canada is much looser than the bond between EU members. And beneath the North American trio of telegenic leaders is an American presidential candidate who says he'll build a wall between the U.S. and Mexico, and a sitting U.S. president who has broken records for deporting immigrants, including more than 146,000 from Mexico last year, according to the US Department of Customs and Immigration Enforcement.

.@POTUS, @JustinTrudeau and @EPN ready to get to business #NALS2016 #3amigos pic.twitter.com/6HoiPys0kG

Whatever the case, most of the chatter online this week about Peña Nieto, Trudeau, and Obama has been positive. That's probably because at least two of these leaders are at phases in their political life cycles that lend themselves to favorable coverage. Obama is nearing the end of his second term, at the point where he seems to be a little more relaxed, and at a time when a particularly contentious election season might have many seeing his presidency through rose-colored glasses.

#NALS2016 #ThreeAmigos Some good Canadian humour for today! Best of luck for this historic and productive visit! pic.twitter.com/iO57N4qHuG

And Trudeau is still in the throes of an Obama-esque honeymoon, just starting his term. He's armed with Disney prince-like good looks and a keen ability to make memorable moments.

Peña Nieto is the outlier though, perhaps in need of Obama and Trudeau's charm; his approval ratings have dropped to record lows in recent months, due to corruption scandals and concerns over the Mexican economy.

One of the most popular tweets of the #3Amigos meme re-purposed some Destiny's Child lyrics for Peña Nieto, Trudeau and Obama.

The lines are lifted from a Destiny's Child classic, "Bootylicious," a song all about celebrating the female form. And perhaps it is fittingly ironic that the Internet would remember the political Three Amigos through a song all about women, because the most interesting part of all the coverage of the three is how they took on the traditional role of the opposite sex on the Internet over the course of this week.

There were comparisons of height and relative beauty, and the ranking of attractiveness and features. It was as if, for a moment, the Internet looked at these men the way it often looks at women. (Of course, if the web really did that, their treatment would be much nastier.)

You could see this as a move for gender equality, even if it was brief and incomplete. Men as the object of the Internet's gaze for once — it's a bit refreshing. All we need to figure out now is which of the three is the Beyonce of the group.