Accessibility links
'Valley Of The Dolls,' Still Sparkling At 50 Jacqueline Susann's camp classic about three women seeking fame and love turns 50 this year; Sex and the City creator Candace Bushnell calls it "a darn good read" and an influence on her own work. 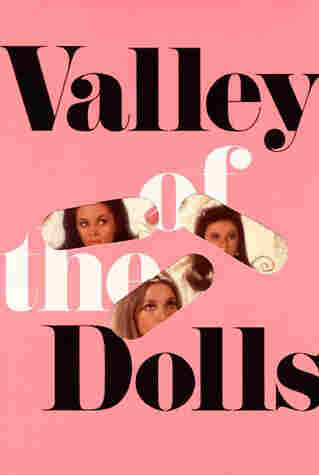 Valley of the Dolls

The novel Valley of the Dolls turns fifty this year — and it still looks fabulous.

Maybe it's the nips and tucks, or the booze and pills — you know, the dolls — or the backstabbing. Or the bonking.

If, for some reason you have not come across this book in your literary travels — or maybe you're pretending you haven't — it's the seamy Hollywood showbiz story of three women, Anne Welles, Jennifer North and Neely O'Hara.

The book broke all kinds of sales records in 1966, despite the critics. At one point, it held the Guinness World Record for the planet's most popular novel. It became a movie, a television series, and made author Jacqueline Susann into a household name before her death in 1974.

Candace Bushnell knows about writing female friendship — she's the author of Sex and the City, which may owe a little something to Valley of the Dolls — and she tells NPR's Scott Simon that the book has always been "a bit of an inspiration to me ... it actually was the first novel published about women that became such a huge bestseller."

On whether Dolls opened doors for women writers

Absolutely. I mean, one of the things that always strikes me is the beginning of the book, when Anne arrives in New York and it's steamy, it's very similar to the beginning of The Bell Jar, by Sylvia Plath ... any time something is a success and it's about women, it does tend to open the door for more books, more movies, more TV series about women, and in that sense it certainly did.

It's a darn good read. There's a depth to it, there's a sadness and a reality to it that's actually poignant.

When the book came out, it was a very different time in terms of what we knew about celebrities and stars and that sort of thing. All of these scandals were kept really, really quiet. And today, we actually live in an opposite time, where everybody puts everything on Twitter ... we know much about celebrities, perhaps more than we would like to, but it's an indication of how fascinated the public is with the lives of stars. Back then, this would have been really the one place where you could get this kind of insider information.

On why it's still relevant in the age of social media

It's a darn good read. There's a depth to it, there's a sadness and a reality to it that's actually poignant. The characters are certainly larger than life, and it's written in a rather broad way. But the feelings and their desires are certainly real, and I think that the reader is really able to connect with these characters' emotions and desires — I mean, they're all things that we all secretly wonder, what would it be like to be famous, and to be a big star? And there's a lot of sadness and poignancy. All of the characters have given something up for their fame and their success, and question whether or not it was worth it.