Accessibility links
Joe Biden Sees 'Significant Breakthroughs' On The Horizon For Cancer Moonshot Initiative For Vice President Joe Biden, the cancer "moonshot" is personal. He lost his son Beau to brain cancer. He says progress is being made on preventing, researching and treating cancer. 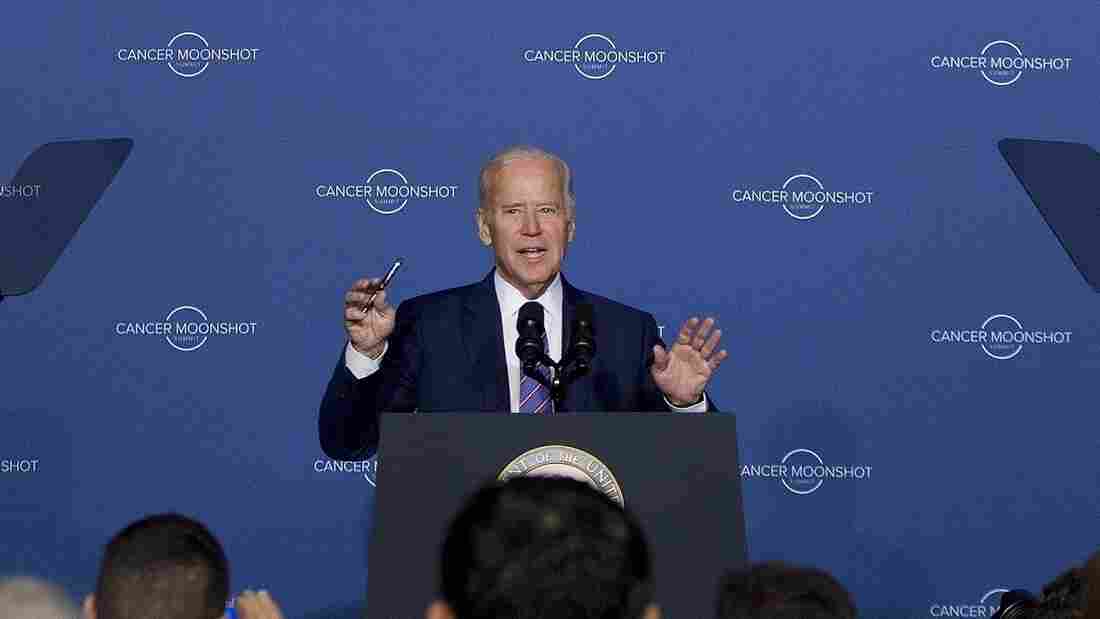 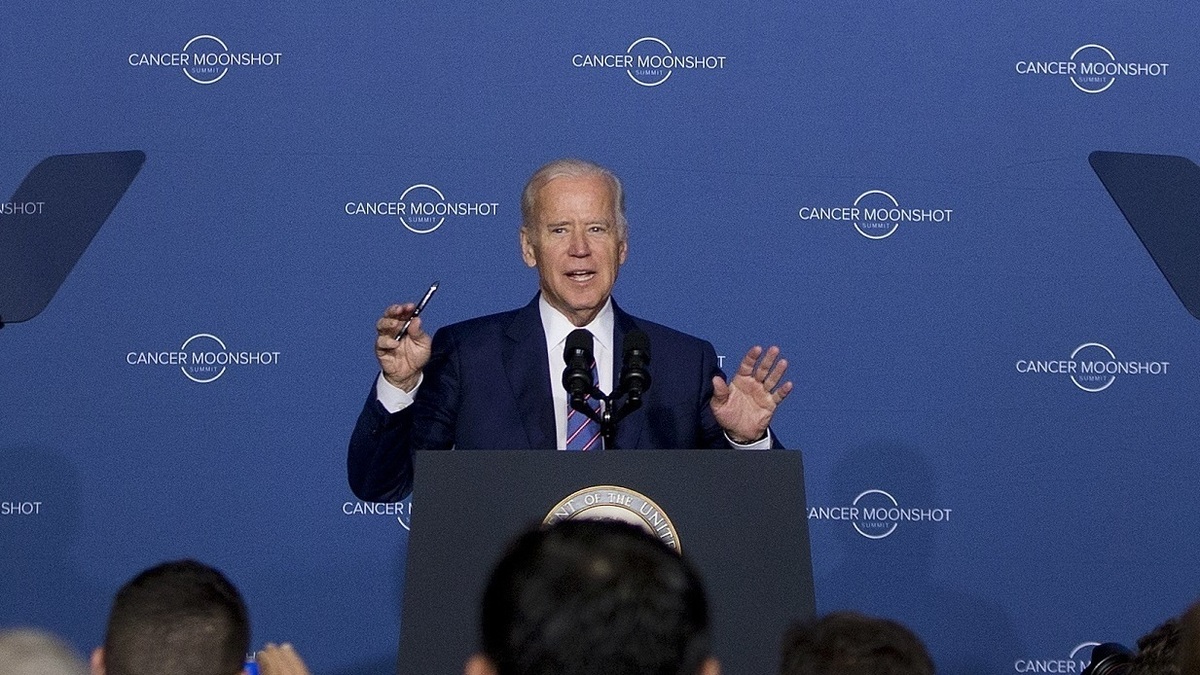 Cancer is personal for Vice President Joe Biden. It's been a little more than a year since his son Beau died at age 46. The cause was brain cancer.

"It's personal for me. But it's also personal for nearly every American, and millions of people around the world," Biden wrote on Medium in January. "We all know someone who has had cancer, or is fighting to beat it."

In his State of the Union earlier this year, President Obama called on Biden to lead "mission control" on a cancer "moonshot" initiative. "For the loved ones we've all lost, for the families that we can still save, let's make America the country that cures cancer once and for all," Obama said.

The vice president was in Cleveland last week to talk about the progress being made on the Moonshot Initiative's goals. He tells NPR's Rachel Martin that he sees an "overwhelming prospect that in the next year, two, three, four, five, you're going to see significant breakthroughs for certain types of cancers."

On the $1 billion tagged for the initiative

No it's not [enough]. ... But here's the deal. It's more than the money. There's an awful lot of duplication. There's very little — there's not nearly enough collaboration, there's not nearly enough joint science. And what's happened in the last five years, we've reached an inflection point. I know you're tired of hearing me use that phrase, but it's true. That we now are understanding where you have genomicists working with the oncologists, working with virologists, working with chemical and biological engineers, working with immunotherapy. Immunotherapy was some voodoo science six, eight years ago. And so there's multiple sources of attack.

On developing vaccines and cancer prevention

[We] already have one for cervical cancer for boys and girls that works. We're already in a position where there's a lot of research being done on liquid biopsies. For example, some of the cancers that, God forbid, we develop are 20 years in the making. But they have markers in the blood that if you could identify them now you can prevent them from even occurring. So it's not merely just finding — there are 200 specific cancer genes that are out there that are 200 specific types of cancer. But there's a lot of things that are on the horizon that [will] not only be able to work with specific cancers, but cancer as a whole.

If we just change lifestyle and stop smoking we'd save 30 percent of the lives who die of cancer period, right now, just cessation of smoking. And so, there's across the board, it's prevention, it is collaboration. We can move more quickly as well as new research development and new breakthroughs.

On keeping market competition robust while encouraging collaboration in research

On getting patients into trials of experimental drugs and treatments

Only 4 percent of the people get in trials. One of the things I'm working really hard on is to have one database where you can go to. Where the oncologist in Oshkosh, or a small town in Montana, or somewhere in the South, or anywhere in the country who's a good oncologist — has no idea ... where those trials are.

So now what we're trying to do is aggregate in one spot. You could go on the web just like you could looking for a job, and know every trial that's taking place in the country, and pick up the phone and say, "I've got somebody who I think qualifies for that trial."

Secondly, one of the things we did — and why the president and I felt so strongly about the Affordable Care Act — is that, you have now 19 million people who didn't have insurance ... before. And if in fact you are a family of four and making less than $60,000, you can't pay more — you don't have to pay more than a topped out number in order to be able to get access to whatever the cancer drug or whatever the drug is you need.

I learned when I lost my wife and daughter when a tractor trailer broadsided them — I decided that there is no answer why, why me or what could have happened. I find it to be not a useful exercise. I think he got the best, I know he got the best care he could've possibly gotten, and the particular disease he had was particularly pernicious, and not much research is being done on it — glioblastoma — in relative terms.

And so I don't sit and say, "You know, if I had been somewhere else, or if this had happened." But I do know this: I do know that there is the overwhelming prospect that in the next year, two, three, four, five, you're going to see significant breakthroughs for certain types of cancers as well as significant breakthroughs in terms of how to turn cancer into a chronic disease as opposed to a life-threatening disease.

You've seen it already. For example, they've determined out in Utah at I believe ... I think it was Huntsman, where they've detected a gene that relates to colon cancer. And so your probability of getting colon cancer [is] exponentially higher if you have this particular gene. Once you're tested and identified that you have that, then you have more frequent colonoscopies. You increase exponentially the likelihood you're not going to die from cancer.

There's a whole range of things that are happening that in terms of detection, in terms of treatment, as well as drugs that are being developed that, that have the potential to engage in the immune system in ways that we never thought about before.

Biden also spoke about the ongoing presidential race and his plans to campaign with Hillary Clinton. Listen to the audio link above or read more here.