Accessibility links
Hey, [Insert Name Here], Check Out These Campaign Fundraising Emails Whether the 2016 campaign email strategies are old or new or just a product of the times, they've certainly got the people of the Internet talking. 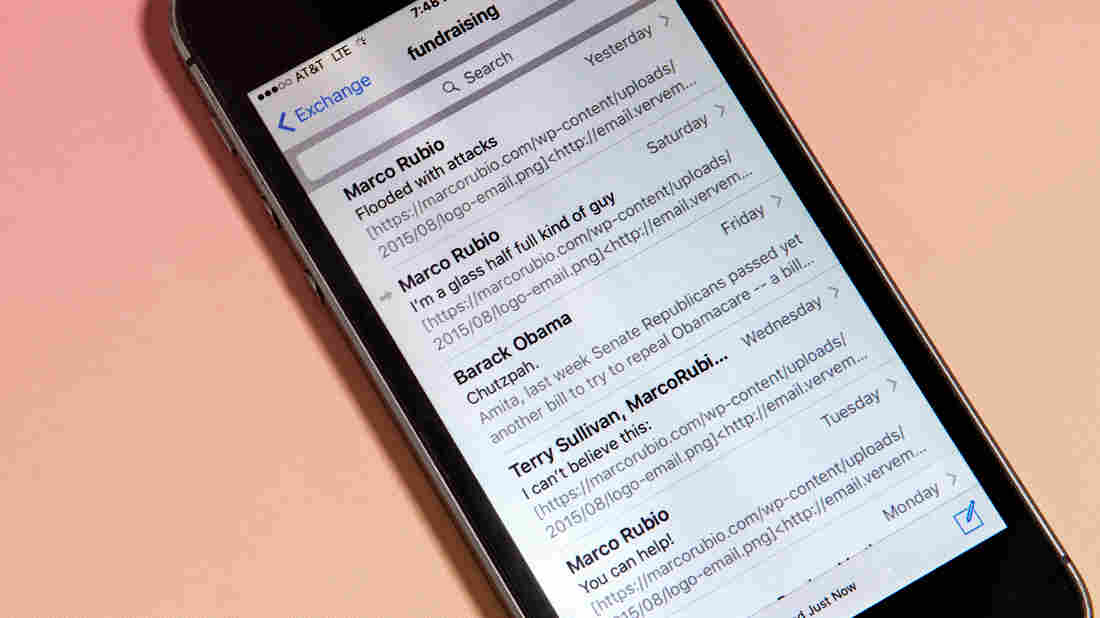 Get ready for your email inbox to be inundated this election season. Ariel Zambelich/NPR hide caption

Email campaign fundraising is tricky. How do you avoid the dreaded spam folder? Should you ask for a lot or a little? Should you sound urgent or casual?

There is definitely a method to the madness of sending out the right email. Candidates painstakingly test every detail of an email ahead of time to determine which is the most effective.

"The Obama campaign is absolutely viewed as an innovator in this way," says Ken Goldstein, a professor of politics at the University of San Francisco. "Obama in '08 and '12, both in emails and texts, discovered it was a way to communicate in familiar and personal terms."

The 2012 campaign is famous for emails with strange subject lines, like the simple yet confusing "Hey" and the provocative "Are You Awake?" email, which calls to mind a different version of that question: the "U up?" popular in dorm rooms nationwide.

Even if the Obama strategy seems weird, it worked. Most of the $690 million he raised online came via email.

"People talk about Instagram and Snapchat and all these different digital platforms, but good ol' email remains the most crucial," Goldstein says.

Some emails sent from this year's two major candidates and their backers aren't that different from Obama's. On June 30, the Hillary Victory Fund sent an email with the subject "[insert name here] vs. Donald Trump." On the same day, the Conservative Liberty Coalition sent one supporting Trump with the subject "Wall Street Attacks Trump." They may be sensational, but they're not necessarily unusual.

What has changed, however, is the political climate.

So in a year where the unfavorability ratings of both candidates are at record highs, the Internet seems quicker to pounce on any gaffes that crop up.

Here are a few examples:

It doesn't read that different from some of the Obama emails, the hashtag #ImNotKiddingMaddi started trending on Twitter, with people using memes to poke fun at Clinton, zeroing in on the $1 ask. It's important to note that some Clinton supporters who had previously donated received different dollar amounts in the email.

One user tweeted a meme of that guy from the State Farm commercials, making his customer fish for a dollar:

Another tweet played off the Wu-Tang Clan song C.R.E.A.M:

And another just wanted the emails to stop:

Yo @HillaryClinton, yo team has got 2 stop with these thirsty email subject lines #ImNotKiddingMaddi #notjustmaddi pic.twitter.com/T65464B845

On June 27, Hillary For America sent an email with the subject "Hamilton" — because if an award-winning, wildly popular Broadway musical doesn't get clicks, what will? The email offered a chance to win a seat next to Clinton at an extra performance of the show, if you donate a dollar to her campaign. With ticket prices starting at $2,700, the fundraiser is expected to raise $3.5 million.

Other politicians have certainly called on Hollywood or the sports world to help raise funds, but with multiple emails inundating inboxes in close succession, the backlash was inevitably close behind:

Of those who did sign up, some Hamilton fans said they regretted entering the contest:

Clinton's missteps are ones expected from a seasoned politician. Trump's are not. First, he started raising money a little late — at the end of May, his campaign account had just $1.3 million, compared to Clinton's $42 million.

The late arrival also means there's not a lot of time left to work out the kinks in how best to reach a large group of people.

He sent out his first fundraising email on June 21, appropriately named "The First One." He pledged to match donations with his own money. Unfortunately, that email landed in the spam folder of 60 percent of its recipients. According to Politico, a domain change might have caused the error — a sign of an inexperienced campaign.

Another fundraising email, signed by Donald J. Trump and sent a week after his first, ditched tradition entirely. It had the subject line, "Breaking: Hillary to be Indicted in November."

It went on to talk figuratively:

Every Election Day, politicians stand trial before the people.

The voters are the jury. Their ballots are the verdict.

And, on November 8th, the American people will finally have the chance to do what the authorities have been too afraid to do over these last 2 decades: INDICT HILLARY CLINTON AND FIND HER GUILTY OF ALL CHARGES.

The email asked recipients to "chip in" various dollar amounts to indict Clinton.

Another user noted the unusual tone. At one point, the email talks directly to Clinton, saying "Yes, you read that right, Crooked Hillary. I know you and your campaign minions read these emails."

Regardless of whether the tactics are old or new or simply feel new because of the current political climate, voters can expect their inboxes to keep filling up until November.