Accessibility links
A Chat With The Painter Whose Work Inspired Kanye West's 'Famous' All Vincent Desiderio knew when he agreed to fly to Los Angeles was that West was a fan of his work. Twenty-four hours later, he found out just how deep the rapper's appreciation went. 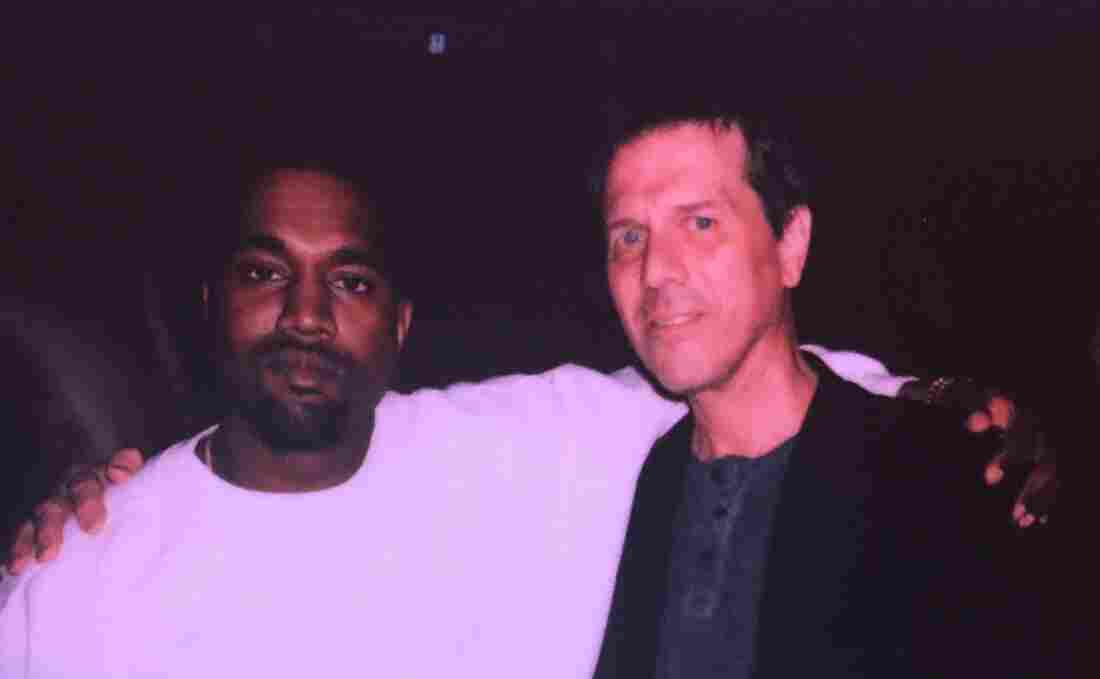 A day after getting a phone call from Kanye West's camp, Vincent Desiderio was in Los Angeles for the premiere of the rapper's video "Famous," which Desiderio's painting Sleep partly inspired. Courtesy of the artist hide caption 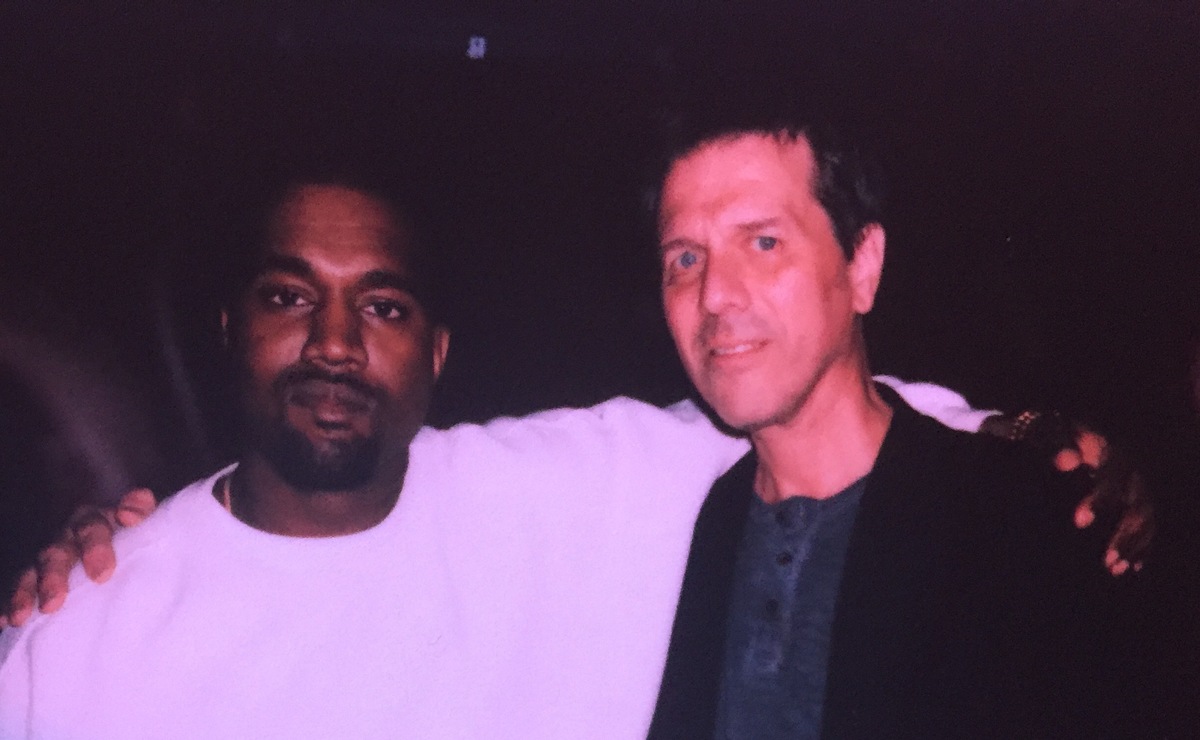 A day after getting a phone call from Kanye West's camp, Vincent Desiderio was in Los Angeles for the premiere of the rapper's video "Famous," which Desiderio's painting Sleep partly inspired.

"It was very cryptic, and quite mysterious. I received a phone call and I was told that Kanye was an enormous fan of my work, and he would like to meet me."

That's how it started for painter Vincent Desiderio. The next day, he flew from New York to Los Angeles to meet Kanye West. When he arrived, he says, "It was as if I'd entered into a surprise party for me."

Desiderio sat down and was shown the music video for West's song "Famous," which was premiering that day. In the 10-minute, very NSFW visual, grainy close-ups move across what appear to be the naked bodies of Donald Trump, Bill Cosby, Taylor Swift and other celebrities. Then, a wide shot from above: those 12 figures, lying side by side in a pile of rumpled sheets. Desiderio says it took him a few minutes to catch on.

"I said to them, 'You must have seen my painting? This looks an awful lot like a painting I did,'" he says. "And they were smiling, because this was the big buildup."

West's video is an homage to a painting by Desiderio called Sleep: a 24-foot wide, hyper-realistic image of a group of people lying in mostly nude slumber. NPR's Rachel Martin spoke to the artist to find out what he makes of "Famous" and of West's new album, The Life of Pablo. Hear the radio version at the audio link, and read more of their conversation below.

Rachel Martin: If you don't mind, since we are in the world of radio, how would you describe your painting?

Vincent Desiderio: The painting that I made is a kind of homage to Jackson Pollock's painting Mural that he painted for the apartment of Peggy Guggenheim, which involves a continuous and repetitive set of marks that calligraphically sort of move across a very wide canvas.

Let's talk about what I imagine has been a crazy few days for you. You got a call last week, asking if you could come attend an event that Kanye was holding the next day.

You know, when I got the first phone call they said "Kanye West," and I heard "Conde Nast." I thought, "Maybe they want to write an article?' It was very weird. Of course, when I told my children that Kanye West's office had just called me, they were freaking out. They said, "Dad, you gotta go!" So off I went.

So you get there and are ushered into a room. You meet Kanye West and he says, "Take a look at this"?

Kind of. I was welcomed with smiles, as if they had been waiting for me to arrive, and we exchanged a few words. "Pablo" refers to both Pablo Picasso and Pablo Escobar jointly, and so we talked about the criminality of art; I mentioned Degas' quote that the painting should be constructed like the perfect crime. And he smiled and said, "It's Saint Paul as well."

The minute he said that, I saw his face and I realized the depth that really was behind so much of what he has been attempting to do as an artist. And then he said, "Would you like to see what we've been working on?"

And you sit down and watch it for the first time. What was your reaction?

I was gobstruck, is the word. I was absolutely floored and honored, and I almost felt like crying. I think that Kanye and I embraced each other, and everyone else was sort of like that — they were all high-fiving me and hugging me. There are experiences like that in the arts where somebody actually gets what you're doing. Not that your goal is to communicate — it's more self-enlightenment. But at that moment I realized that Kanye and I were on the same page completely. He was an art student, and speaking to him was like speaking to the brightest of my peers.

Tell me what you mean when you say that he got you. The video he's made, while it more than echoes your painting with the imagery, he's saying something different: These are not anonymous people, these are famous people. And in his lyrics, he is taking aim at each of those individuals. He's saying something specific that I don't think your painting is saying, though you can tell me if I'm wrong.

One of the big similarities is that, as I was doing my painting, I wasn't feeling a tremendous amount of empathy for the people; I actually thought of them as slumbering idiots who really need to wake up to what's going on, to a different world. And yet, every time I worked on it, rather than taking the image to a highly critical point that's typical in the art world, jaded and cynical, I kept holding back. It was almost as if I began falling in love with the characters, even though at the beginning of my endeavor they were supposed to be people I didn't quite care for.

And so when I saw Kanye's video, I was also struck by [that]. A few these people are certainly repulsive to me, and everything in the habit of my intuitions would steer me to seeing this as a vicious attack on them. And yet, there was something in the execution of the piece that kept all of those thoughts at bay. I felt a spark of empathy — not really for them, it was for the world.

We should also just point out that Kanye himself is in the image, as is his wife, Kim Kardashian.

An incredibly important detail. An image like that is a mirror of the ridiculous cult of celebrity. I think Kanye, who I believe is very much like Andy Warhol in that he does not let his guard down about who he is, presents a mirror to people rather than he telling them how to think.

What I like about it is, it's not a reproduction of my painting: It's a conversation with my painting. The discursive element of that is far more important than the simple idea of he stole the idea, he co-opted the idea, he did this to the idea. He quoted the idea and then brought something different to it, embedded in the strange thinking that went on in my head as I worked on the picture.

I probably don't have to tell you that Kanye West is a controversial guy. Part of his art is to be provocative, and he's married to a woman who made her name based on fame and the idea of garnering more fame — which some would say has led to this kind of "sleeping" of our larger culture. Are you at all uncomfortable that it has taken someone from the cultural mainstream to give you an amount of notoriety that you might not otherwise have garnered?

I think the people around me are a lot more excited about the notoriety — my kids, my wife, my friends — than I am. I saw this as a meeting of two artists. It represented a kind of tearing down of walls and an indication that even coming from both worlds, the world of the ultra-celebrity hip-hop scene, which I'm not part of, and the ultra-celebrity fine art scene. There's something going on beneath the surface of these things — a kind of undercurrent that is slowly, deliberately, and very consciously and undermining the obnoxiousness of those worlds.

You weren't a collaborator on this project, although it sounds like you're completely flattered by it. But can you imagine any actual collaboration with Kanye West in the future?

Yes, I can. As a matter of fact, we spoke of that.

Did he offer any kind of compensation?

No, I wouldn't have taken it. That would have cheapened the entire endeavor. Believe me, when I saw him, when they revealed this to me, it was a gift. The gift was not the gift of celebrity; the gift was that what I did had strains of ideas, of information in it, that he was able to access and redevelop and realize into a different kind of image. It was a communication of artists. Believe me, I get so many questions now — "Did he pay for you? He'd better be buying a painting" — and I'm saying, this is ridiculous. If art is always created in the service of the almighty dollar, we're really in trouble.