Susannah George of The Associated Press has details on the bombing in Baghdad, Iraq that left at least 121 people dead Sunday. The Islamic State group claimed responsibility.

We begin today's program with news out of Baghdad where earlier today, two explosions killed at least 120 and injured some 200 people, including many women and children. The Islamic State is claiming responsibility. The attacks come weeks after Iraqi security forces recaptured Fallujah from the Islamic State. To hear more on this, we reached Susannah George. She's a Baghdad correspondent with The Associated Press. I asked her what we know about the attack so far.

SUSANNAH GEORGE: This was the deadliest attack in nearly a year. It was a very large bomb. We're hearing it was a pickup truck that was loaded with explosives. But it also struck at one of the busiest times of the year for this particular neighborhood in Baghdad. It's a busy commercial area on your average day. But after sundown during Ramadan, it's completely packed with families and a lot of young people who are out at restaurants, shopping for clothing and hanging out at cafes. So that's one of the reasons that we're seeing this large death toll.

SUAREZ: This attack comes just weeks after the Iraqi army recaptured Fallujah, which had been under ISIS control for two and a half years. What does this say about the security situation overall in Iraq?

GEORGE: While bombings on a small scale still happen pretty regularly in Baghdad - you know, a few times a week there'll be IED attacks that have, you know, relatively low casualty figures - big attacks like the one that we just saw in Karada, especially in this part of Baghdad, we haven't seen that regularly at all. You know, as you said, Iraq's military was just celebrating this big territorial victory against IS in Fallujah. And so I think a lot of Iraqis were feeling relatively secure.

There was a lot of talk here in Baghdad about how the streets were more packed this Ramadan in the evening after people were breaking their daytime fasts than people had seen in recent years. So I think there was a lot of optimism. But it's turning out that these territorial victories that we're seeing on the battlefield against IS, they're not translating into improved security in the capital, in Baghdad.

SUAREZ: Is it the same set of security forces both winning on the ground in western and northern Iraq and apparently unable to protect the capital city of the country?

GEORGE: Well, those are two very different fights. You know, waging a conventional warfare against IS when it's protecting a city or protecting a certain piece of territory like a road is a very different fight than when it comes to protecting your own city against an insurgent threat. And while the U.S.-led coalition is really helping Iraqi forces out a lot in the fights against IS on the front lines with airstrikes, with a lot of close operational support, when it comes to protecting Baghdad and manning checkpoints, effectively searching cars, sharing intelligence, that's something that Iraqi security forces just aren't getting right.

And that's something that they haven't been getting right for more than 10 years. And so that's why you've seen a lot of anger in response to this attack and other large-scale attacks like it.

SUAREZ: Well, you've been out and about in Baghdad after the bombing. What's the environment been like?

GEORGE: Well, this morning the shock of what had happened, just as the death toll was beginning to jump, turned very, very angry. The prime minister visited the site and his convoy was mobbed. People were shouting insults at him, throwing rocks at the SUVs that brought him to the site. It's not new for Iraqis to be disappointed with their politicians, but this is something that you're seeing more and more as these attacks continue and as the security situation in Baghdad doesn't improve.

When we returned to the site later in the day, there wasn't yelling anymore. People were tired. Families who had shown up in the early hours of the day who were hoping to receive news about loved ones who were still there were realizing that they probably weren't going to receive the good news that they were hoping for. So it really was a sense of just fatigue and frustration with these ongoing security flaws that a lot of people blame their corrupt political leadership for.

SUAREZ: Susannah George is Baghdad correspondent for The Associated Press. She joined us from their offices there. Thanks for joining us.

At Least 142 Killed In Islamic State-Claimed Bombing In Baghdad 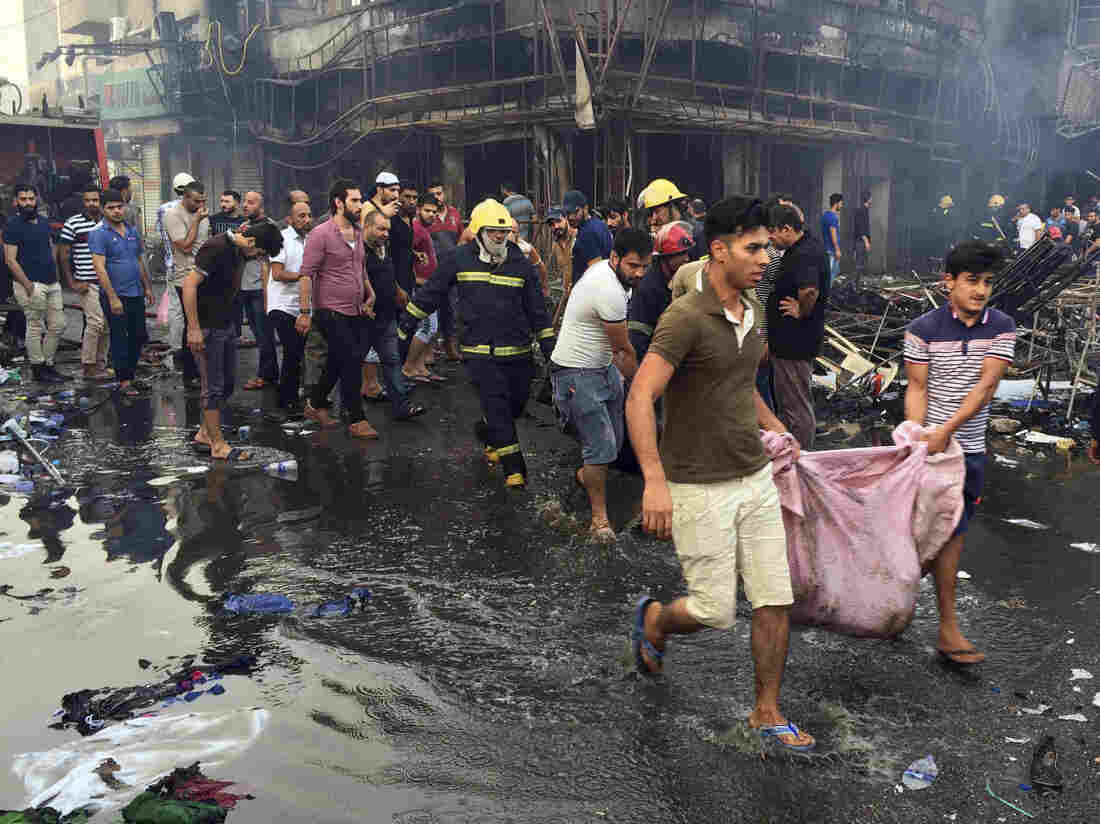 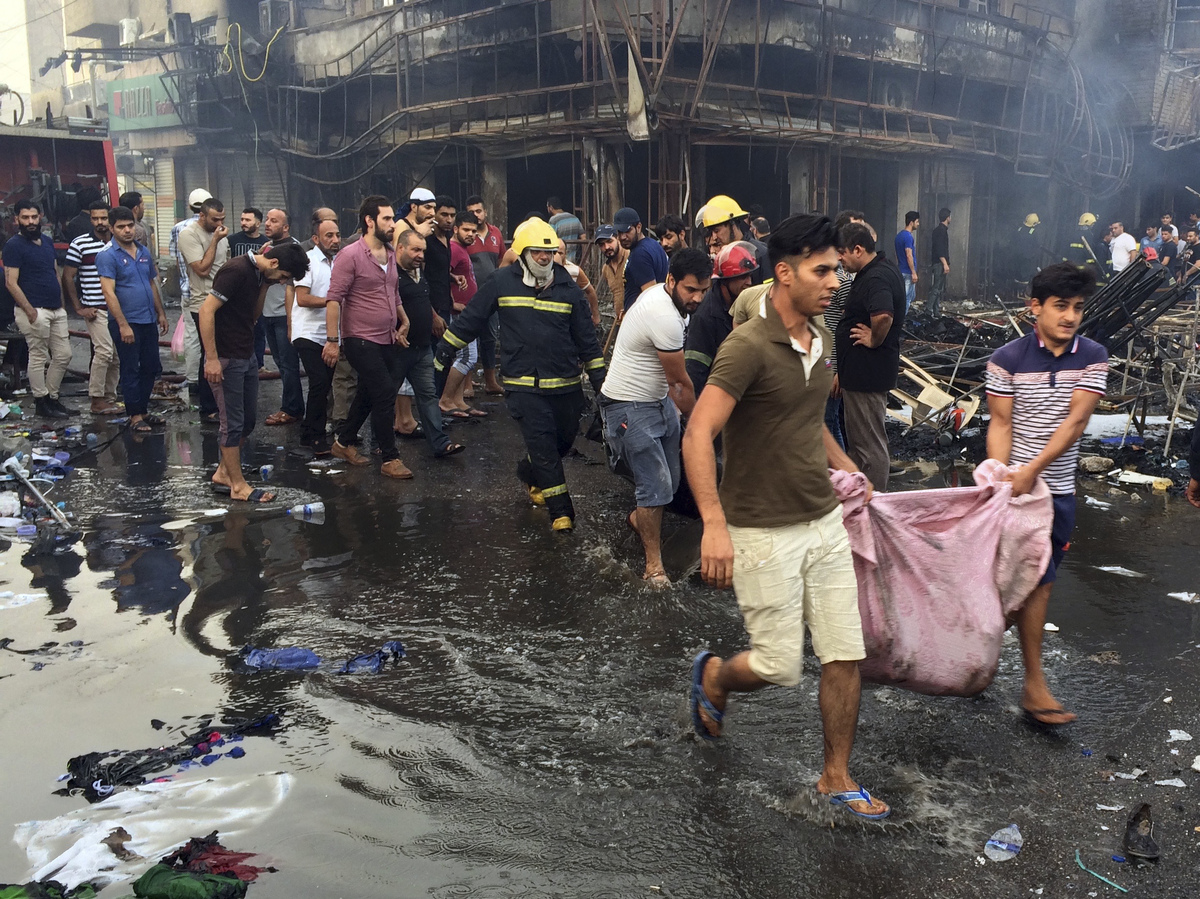 Iraqi firefighters and civilians evacuate bodies of victims killed from a bomb at a commercial area on Sunday in Karada neighborhood, Baghdad, Iraq.

It exploded in the Karada neighborhood very early on Sunday, "where people were gathering to shop, socialize and watch soccer during a hot, lively Ramadan night," as NPR's Alice Fordham tells our Newscast unit. She adds that many people were sitting in sidewalk cafes where they had been watching a European soccer match.

Images from the scene show multiple charred buildings, burned-out cars and twisted metal. Civilians and rescue workers search for survivors and carry out bodies as family members of the missing wait for news. 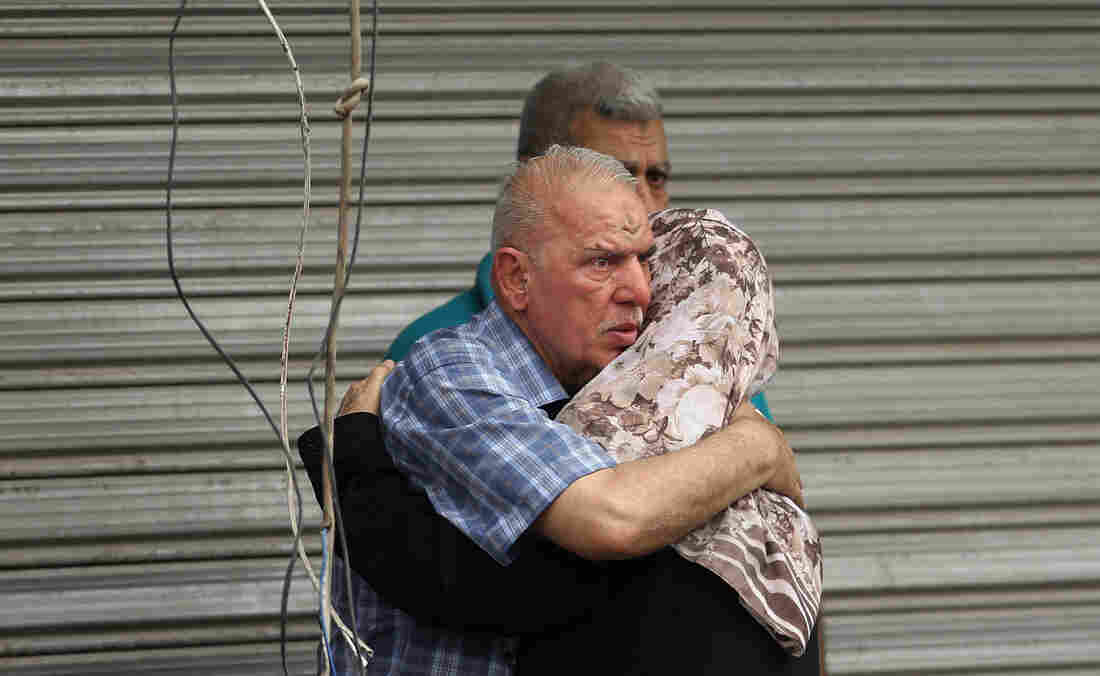 At dawn on Sunday, hours after the attack, firefighters were "still working to extinguish the blazes and bodies were still being recovered from charred buildings," The Associated Press reports. It adds that many of those killed are children.

The so-called Islamic State claimed responsibility for the attack in an online statement, though NPR was not able to independently verify the claim.

He visited the site of the bombing Sunday, where angry residents pelted him "with shoes, water bottles and lumps of rock," as Alice reports. Video circulating on social media appears to show angry crowds and the prime minister's hastily-departing convoy.

A video posted by al-Abadi on Facebook shows the tense-looking prime minister moving through the crowd surrounded by security personnel, amid screaming and racing ambulances.

At Least 142 Killed In Islamic State-Claimed Bombing In Baghdad

This bombing comes a week after Iraqi forces said they wrested control of the city of Fallujah from ISIS fighters. Fallujah is just 35 miles from Baghdad, and the extremist organization used it as a staging ground to mount attacks on the capital.

The angry reception that residents gave al-Abadi, Alice tells Weekend Edition Sunday, "shows us that although he has had a spike in popularity after victories such as the one in Fallujah, by being unable to control the security in Baghdad, the prime minister still finds himself in a vulnerable position.

Alice explains that "in a way, these attacks are more likely" after ISIS has lost territory. When ISIS was at its peak strength in Iraq, it controlled about a third of the country. She adds: 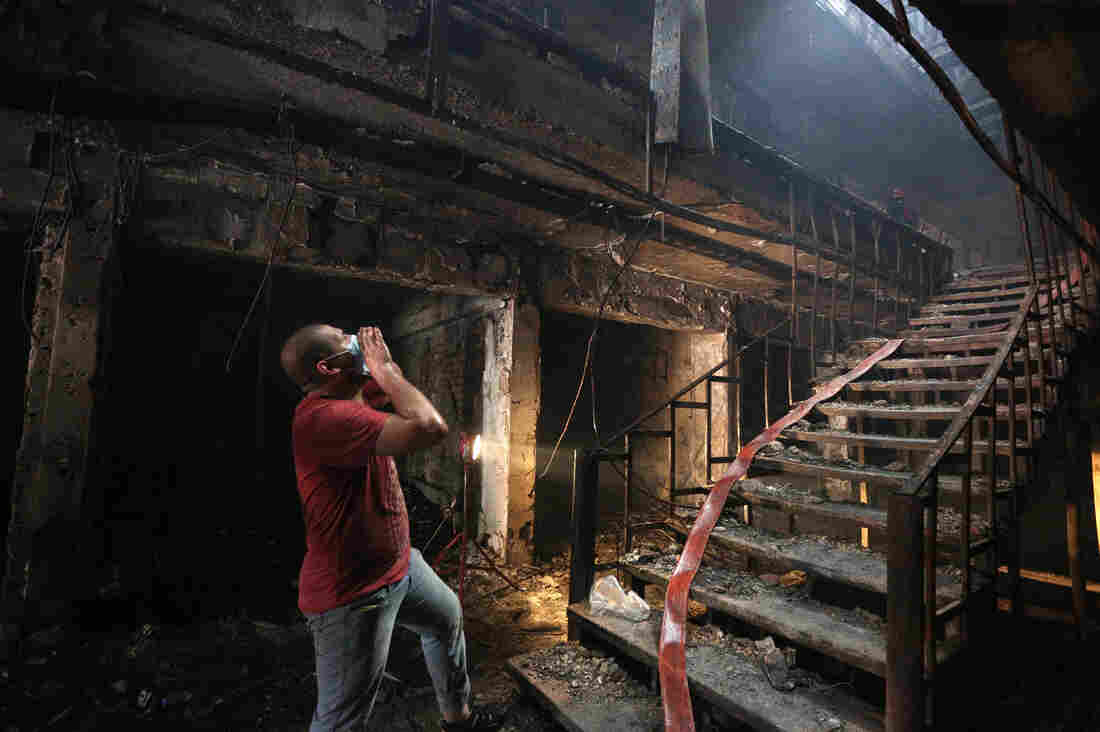 An Iraqi man looks for victims at the bomb site in Baghdad. Hadi Mizban/AP hide caption

"In a surreal kind of way, because the extremists were busy administering territory, their insurgent tactics actually kind of dropped off. Strangely, Baghdad, which was controlled by the government, actually became a lot safer. Now as there have been these victories against ISIS by the Iraqi security forces and their allies, ISIS is no longer administering territory in the same way. But that does mean we have seen these insurgent tactics rear their head again."

The White House has released a statement condemning the attack. "These attacks only strengthen our resolve to support Iraqi security forces as they continue to take back territory from ISIL, just as we continue to intensify our efforts to root out ISIL's terrorist network and leaders," it reads.