Accessibility links
Former ABC News Chief David Westin Encounters Learning Curve As Rookie Anchor David Westin was president of ABC News for nearly 14 years and often tangled with his anchors. Now he's the anchor of the morning show on Bloomberg TV, and is learning how much he really didn't know. 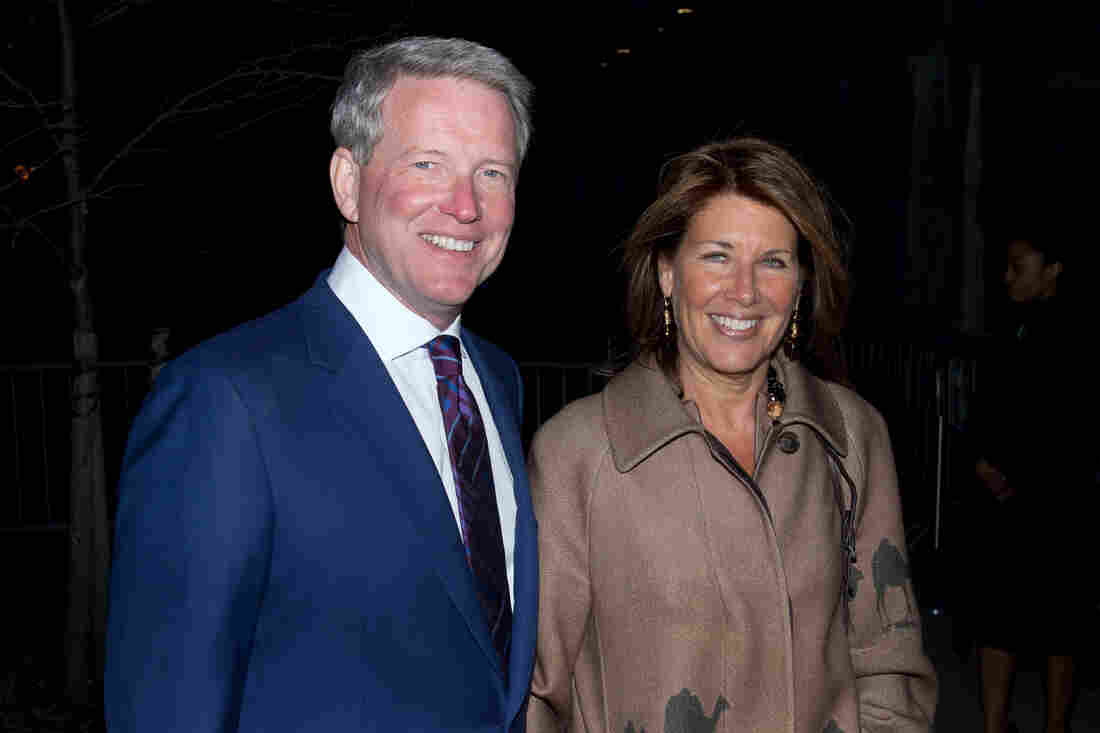 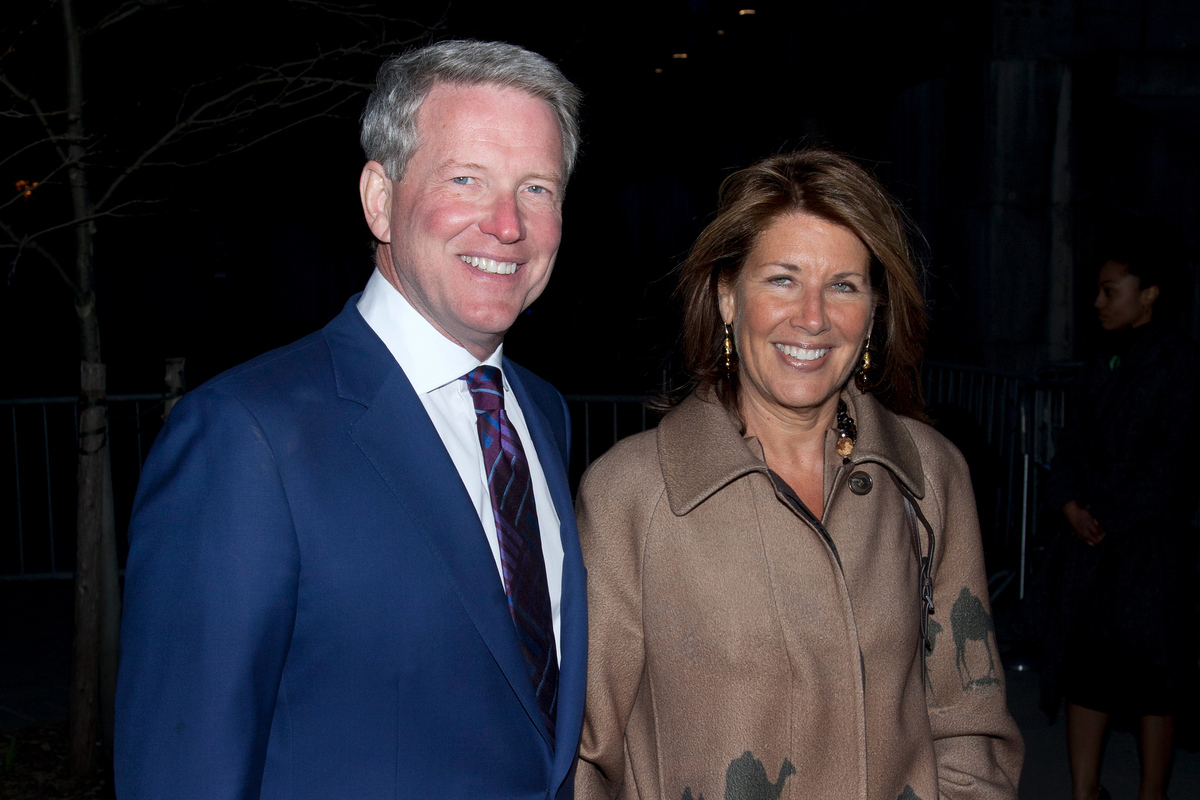 As president of ABC News, David Westin oversaw coverage of the Clinton impeachment, the September 2011 terrorist strike, U.S.-led invasions of Afghanistan and Iraq, and the financial crisis.

He guided the network during the death of his chief anchor, the near-killing of another covering combat, and the substance abuse tribulations of a third. He also instituted deep staff cuts at the behest of ABC's corporate owners, The Walt Disney Co.

These days, Westin sets his alarm at 3:45 a.m. to prep for his shift on a network with far smaller audiences, anchoring Bloomberg TV's morning show — called Bloomberg GO.

Westin says the challenge is invigorating and the learning curve steep.

"Television news is a true team effort. I knew that; I said that," Westin recalls. "I didn't appreciate the extent to which when you're out there and it's your face, your voice, going out, when someone makes a mistake, the prompter's wrong, they write the wrong things in there, nobody says, 'Oh, the control room did something wrong; nobody says that producer made a mistake.' It's you."

"I thought [at the time] they're just being finicky, or they're awfully sensitive, or they're temperamental, they're talent," Westin says. "Now I realize, oh I see why they were so upset by that; I see why that was so frustrating to them; I understand why they lost their temper."

When I asked Sawyer about it, she let out what she called "a little chuckle at the ironies of life."

"I'm told that every management at every network calls us 'anchor monsters,' " Sawyer said wryly. "I'm just throwing that out there, not that it could possibly ever be warranted."

Once Westin's star employee, now Sawyer is something of a mentor. "He has such an effective and concise mind — I guess that was honed as a lawyer. But he understands immediately the way we think of stories — beginning, middle, end," Sawyer says. "He understands that intuitively."

She says she has encouraged him to think hard about making the moment-to-moment transitions, the hand-offs to reporters in the field, the pivot to questioning a guest in studio, the response to a whispered cue in his ear from a producer.

"I think sometimes when you're new — and I certainly did this a lot — you think you have to stop and have a little thought or two or paragraph or six before you turn," Sawyer said. "I've said to him, speed is your friend." The term anchor, she says, has a sporting, not nautical derivation: it was coined by her former boss, the late Don Hewitt of CBS, who thought of a news presenter as the key member of a relay team, handing the baton off to correspondents.

In 2000, The New Yorker magazine declared Westin to be "the first network news president who is handsome enough to be in front of the camera." The declaration was not intended entirely as a compliment. But for years, according to two former ABC executives, several of Westin's colleagues at ABC News urged the executive to consider appointing himself to the anchor's chair.

Gibson was among them.

Westin left ABC News in 2010 after nearly 14 years as president and became a consultant to and investor in several media-related projects. Westin, who is 63, says he did not seek the new role but found it thrust upon him.

Casting about for a new anchor, Bloomberg Media CEO Justin Smith had been lobbied by a source with unusual credibility: Charlie Gibson, who remembered the periodic, televised briefings Westin conducted with executives at ABC's affiliate stations.

"David was a very astute lawyer. He's facile in the way his brain works," Gibson said in a recent interview. "And the way he synthesizes things — the way he listens to what people are saying and then puts things together. I thought this is a really unconventional choice, but he's really good on the closed circuit broadcasts."

As Gibson prepared to leave Good Morning America to take over World News full time, he said, he had told Westin to appoint himself co-host of the morning show with Sawyer.

"I told him, 'Hell, you'll make more money than you do now — and you wouldn't have to lay off people.' "

"And I said to him, and I believe I was right ... 'Let's just imagine what The New York Times piece reads: 'David Westin, president of ABC News, appoints himself anchor of GMA.' How does that read?' " Westin recalled.

Bloomberg Television draws modest audiences — a sore point for the network and its parent company, Bloomberg LP — but it does attract influential viewers from the specialized worlds of finance, business and government. It also gives Westin some breathing space to learn.

Westin has held many jobs previously, none of them typical qualifications for a financial news anchor's job. He is a University of Michigan-trained corporate lawyer, a former Supreme Court clerk — and network president of ABC before taking on the top news role. (In his memoir, Exit Interview, Westin wrote that he volunteered for the role, Dick Cheney-like, after being asked to come up with a replacement for the legendary ABC News Chairman Roone Arledge. Perhaps that provided a template for Gibson's suggestion.)

Westin is on the air three hours a day, along with Bloomberg's Jonathan Ferro, a British-born financial journalist. Both Westin's presence and the program are works in progress. His initial co-host, Stephanie Ruhle, decamped for MSNBC shortly after the launch of the program.

Sawyer says Westin was incredibly supportive as ABC's chief news executive but didn't always register what she was saying.

"When you came after a broadcast and said, 'Let's talk about the broadcast,' he thought that you were looking for reassurance, or you were looking for compliments," Sawyer recalled. "In fact you were saying, 'I am out there with the teleprompter, which I am reading, and the news copy which I am working on, and working ahead, and the story order is changing, and the stage manager is telling me which camera to look at, and I'm concentrating on the viewer, and there's somebody in my ear who may be telling me about breaking news.

As an anchor, Westin misses little on air. He's a careful listener, a quick study, with a lawyer's ability to drill down.

"There are very few jobs you can have ... where they pay you a reasonable amount of money to come in every day, learn about things other people don't know about, and then tell other people about it in a way they can understand and retain and use," Westin says in a lounge off the soaring atrium that defines Bloomberg's headquarters in New York City. "That's a really good job. And on a really good day, make a difference."

Westin says he would now tell any future ABC News president who asked for advice to anchor a show for one week: ABC's overnight news show, the program with the division's lowest ratings and the least at stake.

He's still not perfectly polished. The morning I visited Bloomberg's set, Westin stumbled over the name of a financial analyst. The mistake was modest, yet Westin apologized gently on the air — and profoundly afterward, taking pains to explain precisely why it happened.

TV audiences do not grade on a curve, Westin instantly replied. It's on you.