Accessibility links
President Obama Campaigning For Clinton Is Historic. It Hasn't Happened in 100 Years Looking back at the last century of presidents, none has strongly campaigned for his chosen successor. 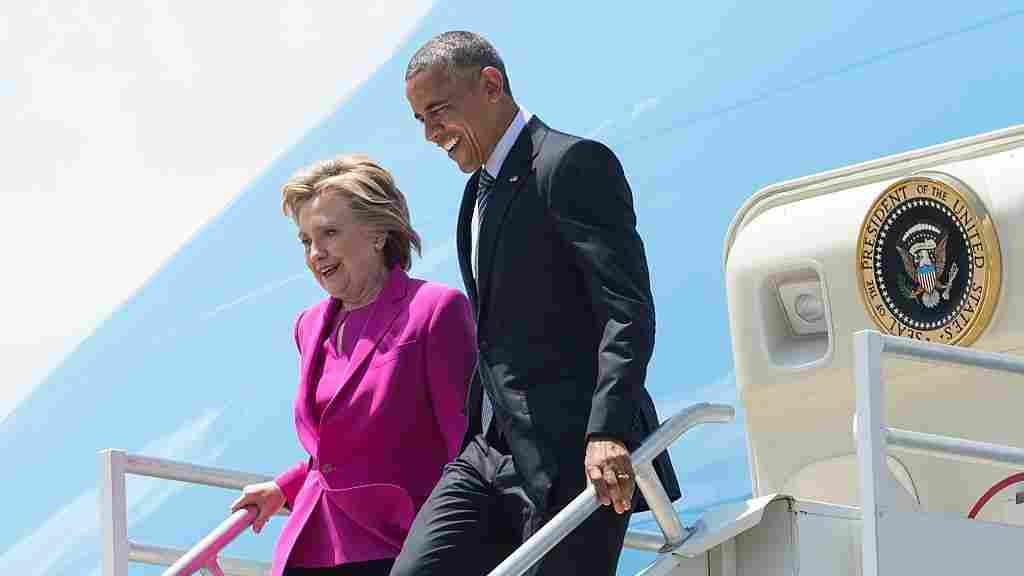 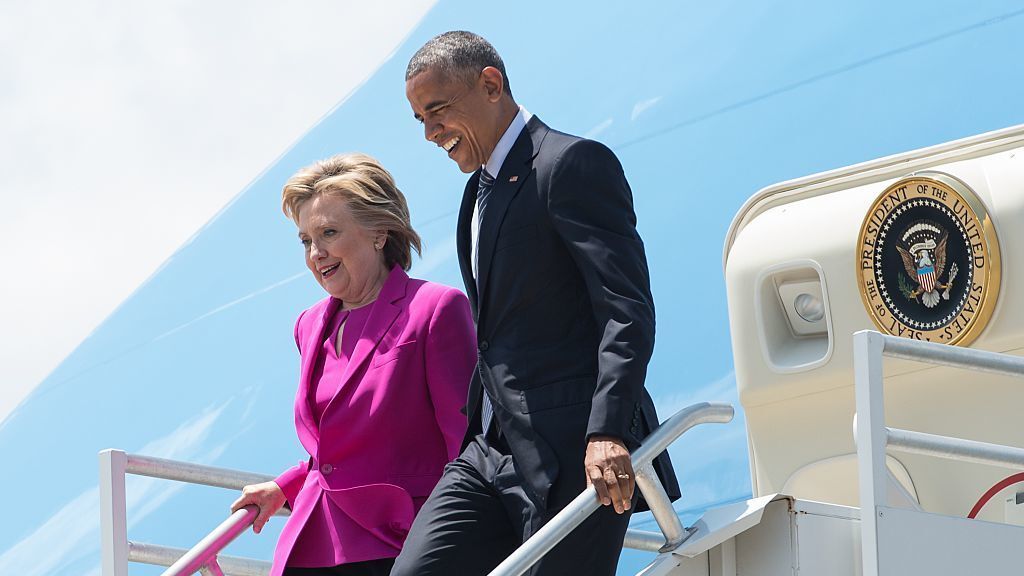 No president has campaigned strongly for his chosen successor in at least 100 years.

Tuesday's event, with President Obama campaigning for Hillary Clinton, his former secretary of state and onetime rival, in North Carolina is remarkable for that reason. It kicks off what is likely to be a season of vigorous campaigning by the president.

There are reasons presidents haven't campaigned strongly for a successor — sometimes they're unpopular, some nominees try to distance, some presidents were in failing health.

Clinton 'Thrilled' To Have President's Endorsement

Here's a look back at the last 100 years of presidents to see just how rare it is:

Bush was wildly unpopular by the end of his second term, with the war in Iraq still raging and a job-approval rating in the 30s. There was an awkward Rose Garden endorsement in March 2008 that started a bit inauspiciously. McCain was late. Here's how The Washington Post recapped:

" 'So, anyway,' Bush said to the reporters who had assembled there to see the two men shake hands. 'As I was saying ... ' He smiled a bit, but no McCain. He did a mock soft-shoe dance. 'I'm just going to tap-dance a little,' the leader of the free world said. Finally, he disappeared into the White House, telling onlookers: 'Pretend like it never happened.' " 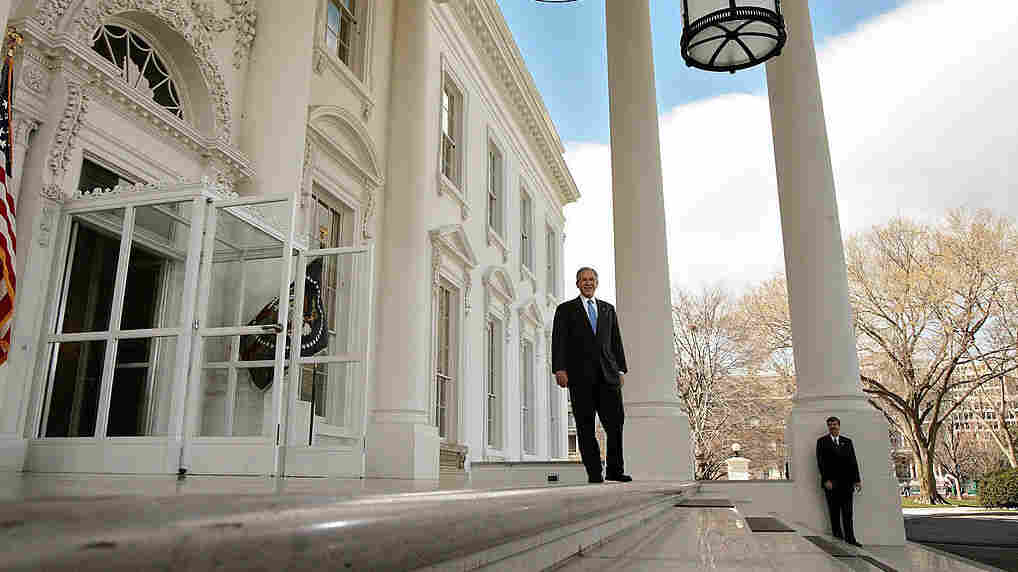 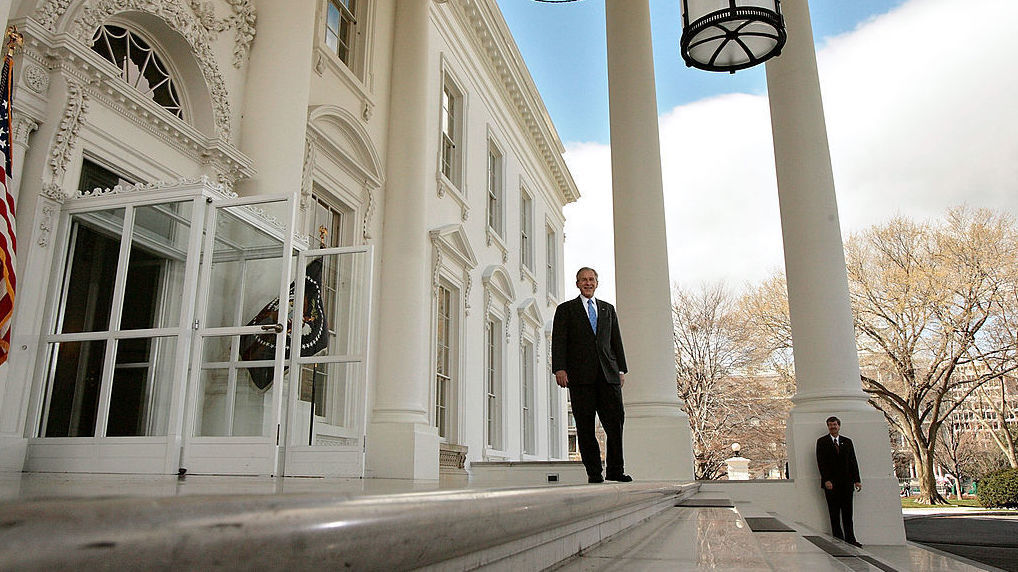 President George W. Bush waits on the North Portico for the arrival of Republican presidential nominee Sen. John McCain at the White House on March 5, 2008.

"After McCain and his wife, Cindy, finally arrived, Bush and the senator had lunch in the small dining room next to the Oval Office, then emerged for the long-anticipated endorsement by the president in the Rose Garden. Bush promised to campaign for his onetime rival and occasional legislative critic as both men seek to keep Democrats from taking over the White House. ...' I appreciate his endorsement,' McCain told reporters, indicating he does not intend to distance himself — at least not too much. 'I intend to have as much possible campaigning events together as is in keeping with the president's heavy schedule.' "

The schedule apparently was too heavy, as Bush's approval rating plummeted even further, dipping into the 20s, according to Gallup.

Bill Clinton endorsed Al Gore in December 1999 from a stage in Orlando, Fla., lauding him as "the most effective and influential vice president who has ever served."

He would take the stage with Gore in August 2000 in Monroe, Mich., calling him "the right person to be the first president of the 21st century."

There were a couple of hugs, Hillary Clinton and Tipper Gore clapping and swaying in the background. But that was about as warm as it got in Gore's ill-fated 2000 campaign. The New York Times:

"After eight years together, here is the state of the relationship between President Clinton and Vice President Al Gore: Mr. Gore won't pick up the phone. He doesn't call, and Mr. Clinton doesn't know why. ... Mr. Clinton is both hurt by the personal rebuff and bewildered as to why his political heir won't come to him for the advice he is itching to give — advice the president feels the candidate needs, according to two friends who have discussed this with Mr. Clinton recently.

"The buddy movie that began when these two young Southern centrists started off on a high-energy bus tour across America in the 1992 campaign wasn't supposed to end like this. ... On the day Mr. Gore formally declared his candidacy in June 1999, ABC News broadcast an interview with the vice president in which Mr. Gore repeatedly distanced himself from the president, voicing disappointment over Mr. Clinton's behavior with Monica S. Lewinsky, the White House intern with whom he had an affair."

Still, despite the Lewinsky and impeachment scandal, Clinton's job approval rating in 2000, per Gallup, never fell below 55 percent.

The last time anything like that has happened was in May 1988, when President Reagan endorsed his vice president, George H.W. Bush, after the outcome of the primaries was clear.

"I'm going to work as hard as I can to make Vice President George Bush the next president of the United States," Reagan said in short remarks at a black-tie fundraiser. 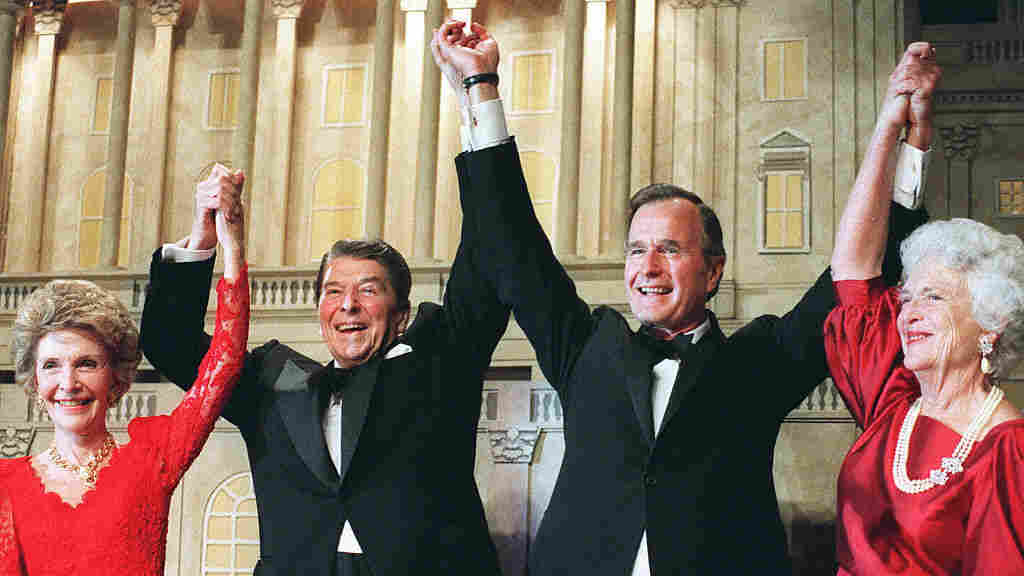 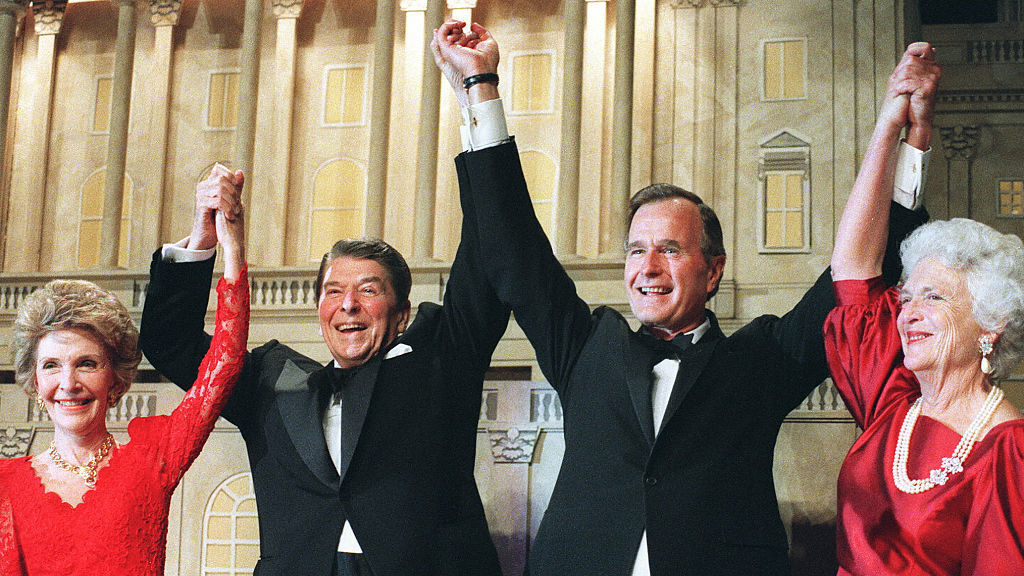 President Ronald Reagan with presidential hopeful George Bush after Reagan announced his endorsement of Bush as the next U.S. president, November 1988.

But Reagan raised eyebrows when he mispronounced Bush's name. The New York Times wrote at the time:

"Many of the Republicans at the dinner here tonight expressed surprise that Mr. Reagan had not delivered a longer or more effusive endorsement of his Vice President. In fact, the endorsement consisted of only one paragraph, in which Mr. Reagan mispronounced the Vice President's name, saying it as if it rhymed with 'rush.' "

Reagan never did go on to campaign strongly for Bush, who wound up winning that year.

The 1968 campaign was a mess for Democrats. With the unpopular war in Vietnam, Lyndon Johnson did not run for re-election. Instead, Eugene McCarthy made a run at it. The Minnesota senator won the New Hampshire primary in a surprise. Bobby Kennedy came on as a late favorite but was assassinated after his win in California. Hubert Humphrey, Johnson's vice president, though, became the Democratic nominee without campaigning in the primary, getting enough delegates at the convention. 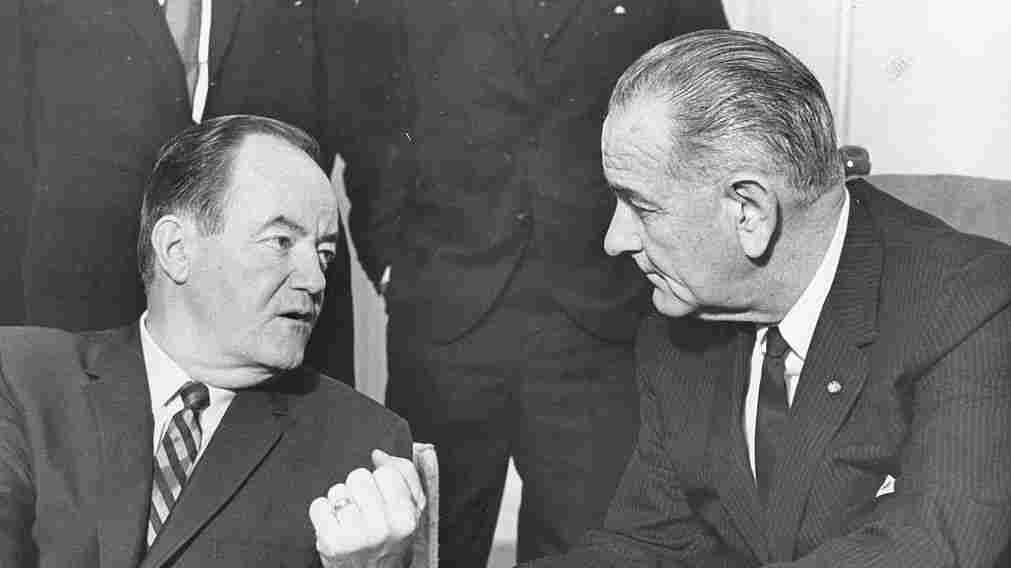 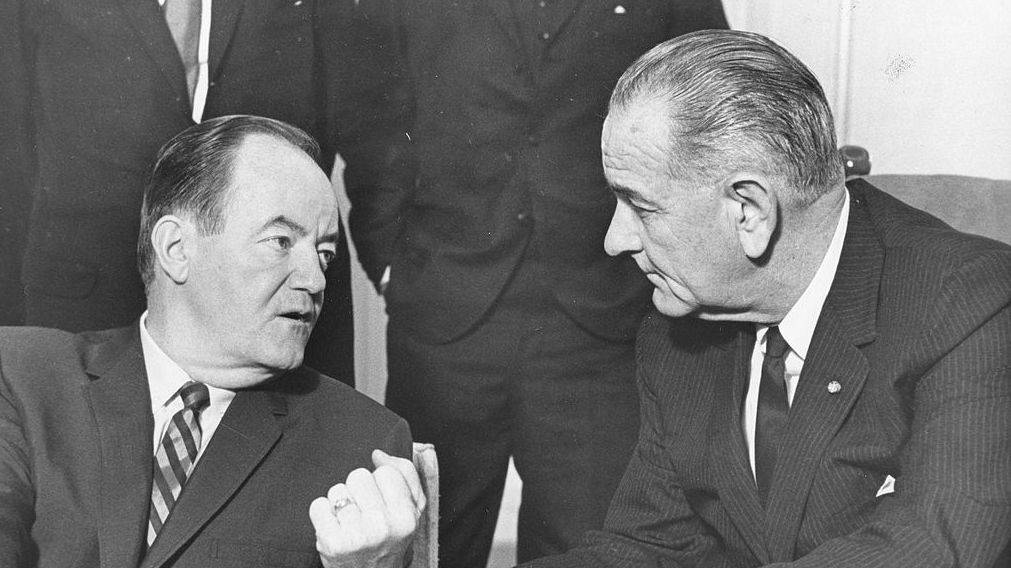 Not only did Johnson not campaign with Humphrey; he made things more difficult for him. Humphrey was seen as tied to Johnson's unpopular war policy, something that complicated things for Humphrey at the Democratic convention. Humphrey wanted to move the convention to Miami and push his own platform. But, as the Minnesota Historical Society notes:

"Johnson refused, and moreover used his influence to pass his Vietnam platform over Humphrey's as the official Democratic Party statement. Humphrey, who to win the nomination needed Johnson's support in attracting delegates from southern states, had no choice but to agree to Johnson's Vietnam plank."

The convention in Chicago was among the worst disasters in convention history, with police beatings shown on national television outside the convention and raucous debates inside. The party was divided heading into the general election. McCarthy, for example, didn't endorse Humphrey until a week before Election Day. And then the break with Johnson came. The Minnesota Historical Society:

"In Seattle, in late September, Humphrey's campaign reached its nadir as a heckler demanded that Humphrey be tried before the United Nations as a war criminal. Humphrey finally realized he had to visibly break with the Johnson administration's policy on Vietnam in order to have any chance at the presidency. In a speech in Salt Lake City on September 30, Humphrey proposed a halt to the bombing of North Vietnam. Having shed his cheer-leading vice president image, he was able to go on the offensive." 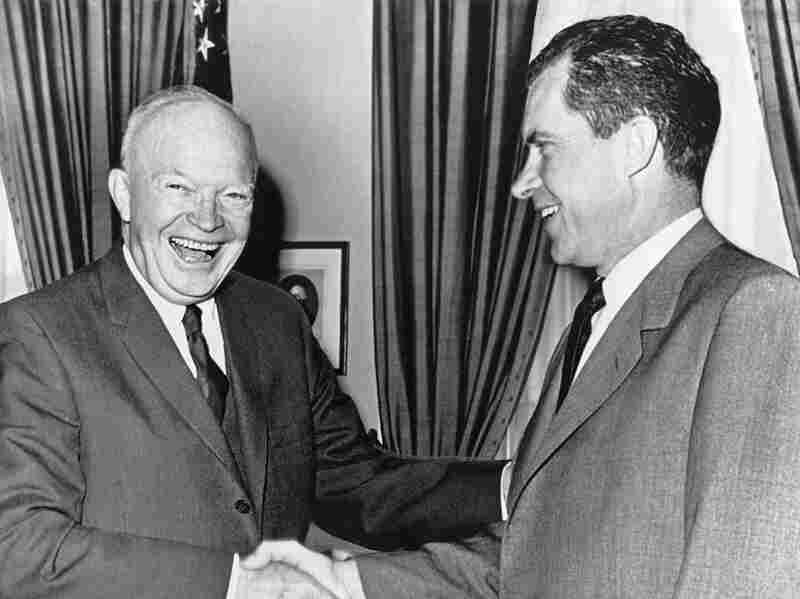 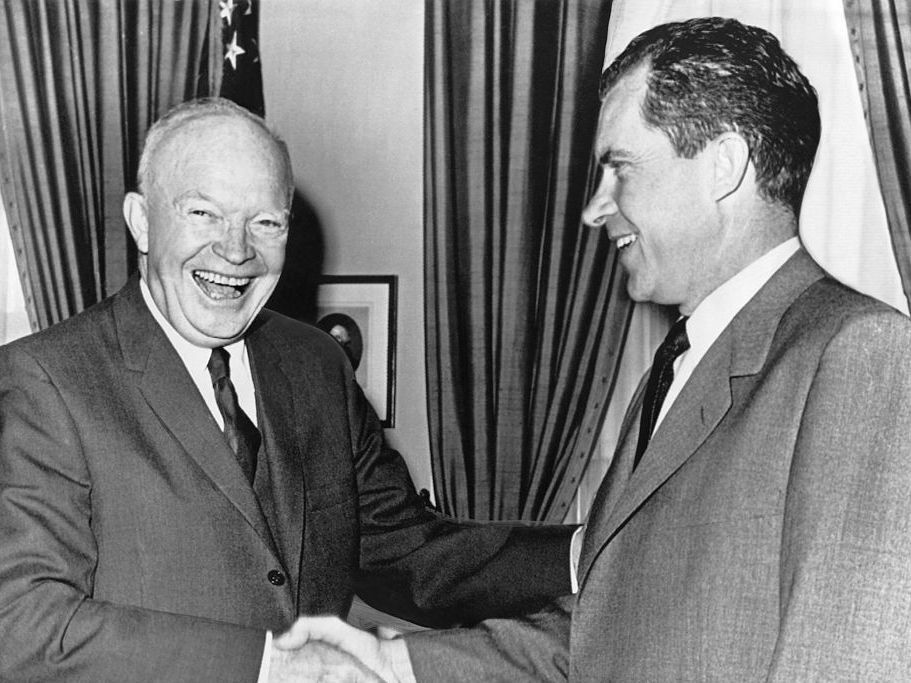 In January 1960, Dwight Eisenhower was given the opportunity to give a formal endorsement of his vice president, Richard Nixon, to succeed him. He did not.

"The only thing I know about the Presidency the next time is this — I can't run," the Los Angeles Times wrote at the time.

And then in August, Ike delivered one of the most searing lines by a president of his vice president. Asked to give an idea that Nixon had come up with during his presidency, Eisenhower said, "If you give me a week, I might think of one. I don't remember."

Ike and Nixon never had a warm relationship, and the man who had helped win World War II wasn't going to be saving Nixon. Nixon went on to lose to John F. Kennedy by fewer than 113,000 votes out of 69 million, or less than two-tenths of a percentage point.

By the way, Kennedy had his own issues with the last Democratic former president, Harry Truman. Just a week before the Democratic convention, Truman said Kennedy wasn't ready to be president, should step aside and asserted the convention was rigged, a "pre-arranged affair" in Kennedy's favor. Truman did go on to campaign for Kennedy in the fall.

Coolidge, who didn't run for re-election, endorsed Herbert Hoover, his commerce secretary, who wound up winning in '28. Coolidge wrote a letter on his behalf to Massachusetts Republicans:

"It is a time when the people ought to stand firm. There is nothing that could be more reassuring to the business interest of the country at this time than a knowledge that the people propose to support sound Republican principles. When that has been demonstrated many of our ills will disappear. We must put on a fighting campaign for the election of President Hoover and our Massachusetts state ticket."

But "Silent Cal" lacked the energy to campaign after being heavily affected by the death of his father and son. A year later, the stock market crashed, beginning the Great Depression, and four years after that he died of a heart attack. He was just 60.

Wilson fell ill by the final year of presidency and was hardly able to campaign vigorously. But he was also hardly fond of James Cox, the Democratic governor of Ohio, who emerged as the Democratic nominee. (Cox, with FDR as his vice presidential pick, would lose to Harding in a landslide.) From the book "Young Mr. Roosevelt: FDR's Introduction to War, Politics, and Life":

"From the White House, Wilson, hardly conciliatory about anything, called Cox's candidacy 'a joke.' A Dayton newspaper publisher before election to state office, the governor's contribution to the war effort had been to ban the teaching of German in Ohio public schools."

Wilson, who was elected in 1912, actually hatched a plan to get himself nominated for a third term — despite his health, because of his desire to see the League of Nations adopted. He was not nominated. Wilson died three years after leaving office.

The Miller Center at the University of Virginia notes that after Roosevelt's victory in 1904:

"Roosevelt vowed not to run again for the presidency, believing it was wise to follow the precedent of only serving two terms in office. However, he came to regret that promise in advance of the 1908 election, believing he still had much of his agenda to accomplish. However, he held true to his pledge and supported his chosen successor, William Howard Taft, in 1908."

Roosevelt apparently did regret that decision, as he would go on to challenge Taft four years later, running on the Progressive ticket, instead of the Republican Party's. He wound up finishing ahead of Taft, but Wilson won.

In a previous version of this story, we incorrectly said that James Cox lost the election to Calvin Coolidge. He actually lost to Warren Harding.