Accessibility links
'Here Comes The Sun' Shows A Complex, Heartbreakingly Real Jamaica Nicole Dennis-Benn's assured, gorgeous debut novel follows Margot, a worker at a rich Jamaican resort, whose home life is a series of sacrifices as she struggles with family and forbidden love. 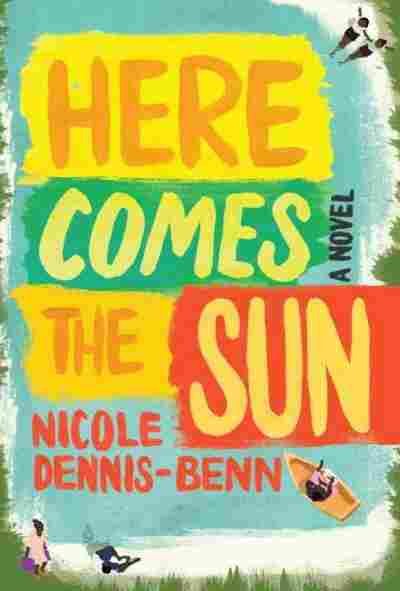 There aren't many lucky people in the fictional Jamaican town of River Bank, the setting for Nicole Dennis-Benn's debut novel Here Comes the Sun. A long drought has robbed many residents of their livelihoods, and their homes are being threatened by developers who want to build yet another huge resort, one where rich, white tourists can sequester themselves away from the reality of the poverty-stricken villages that surround it.

30-year-old Margot has something approaching luck, though. She has a steady job — she's one of the workers at a resort, many of whom leave each evening in an unlicensed taxi, "which will take them home to their shabby neighborhoods, away from the fantasy they help create about a country where they are as important as washed-up seaweed."

She works to help her mother, Delores, put food on the table, and to provide a good education for her 15-year-old sister, Thandi — "Thandi the good girl, Thandi — a source of hope for her family, destined for riches and prestige" — a student in a Catholic high school who wants nothing more than to be an artist. (Her family would much rather she aim for medical school.)

Margot's life is a series of sacrifices. She earns extra money by having sex with guests at the hotel. "She doesn't see it as demeaning," Dennis-Benn writes. "She sees it as merely satisfying the curiosity of foreigners who pay her good money to be their personal tour guide on the island of her body."

'This Is No Paradise': Author Explores The Side Of Jamaica Tourists Don't See

Perhaps her biggest sacrifice, though, is keeping the woman she loves, Verdene, at arm's length. Verdene is a pariah in the town, a lesbian whose house is regularly vandalized by homophobes who consider her something less than a human, something worse than a demon.

In the hands of many writers, Margot — and most of the characters in this novel — could easily become just someone to pity, or conversely, someone to admire for her determination in the face of adversity. But there's no character in Dennis-Benn's novel that's anything less than complex, multifaceted, and breathtakingly real. That's part of what makes Here Comes the Sun one of the most stunningly beautiful novels in recent years.

There's no character in Dennis-Benn's novel that's anything less than complex, multifaceted, and breathtakingly real. That's part of what makes 'Here Comes the Sun' one of the most stunningly beautiful novels in recent years.

Take Thandi, the teenage artist, who regularly feels crushed by the weight of her family's expectations. She's been secretly undergoing skin-lightening sessions, to the dismay of her mother, who's impossible to please. "Who yuh know really love a black girl for more than what's between her legs?" Delores asks Thandi, in one of the book's most heartbreaking moments. "'Membah dis, nobody love a black girl. Not even harself."

And then there's Margot's lover, Verdene, who's known Delores and her daughters for years. She's desperately in love with Margot, and feels an acute need to heal, or at least comfort, the woman: "But then there's that pain she senses in Margot — the kind of pain that makes other pains seem minute, insignificant in comparison. Even when Margot was a girl, Verdene sensed this pain. Saw it in her eyes. It was stifling enough to choke her if she wasn't careful to look away."

Dennis-Benn's writing is so assured, so gorgeous, that it's hard to believe Here Comes the Sun is a debut novel. There are no wasted words; every sentence is constructed with care and a clear eye. She writes with a calm, steady voice even in scenes where things go horribly wrong for her characters.

And there are many of those scenes. Sometimes Dennis-Benn's characters make poor choices; other times, they're the victims of the poor choices, and the greed, of others. The latter is certainly true of the town of River Bank, which is a character in its own right: "It was as though their own land had turned on them — swallowed up their homes and livestock and produce and spat out the remains."

Dennis-Benn is a compassionate writer, but she's also a realistic one. Here Comes the Sun ends where it has to, not where we want it to. She doesn't understate the pain that her characters are forced to withstand, and neither does she romanticize it.

That can be hard for any author to pull off, but Dennis-Benn almost makes it look easy, although there's nothing easy about this novel — it's a joy to read, but you can tell that every sentence was hard-fought. Here Comes the Sun is tough, beautiful and necessary, and it feels like a miracle.