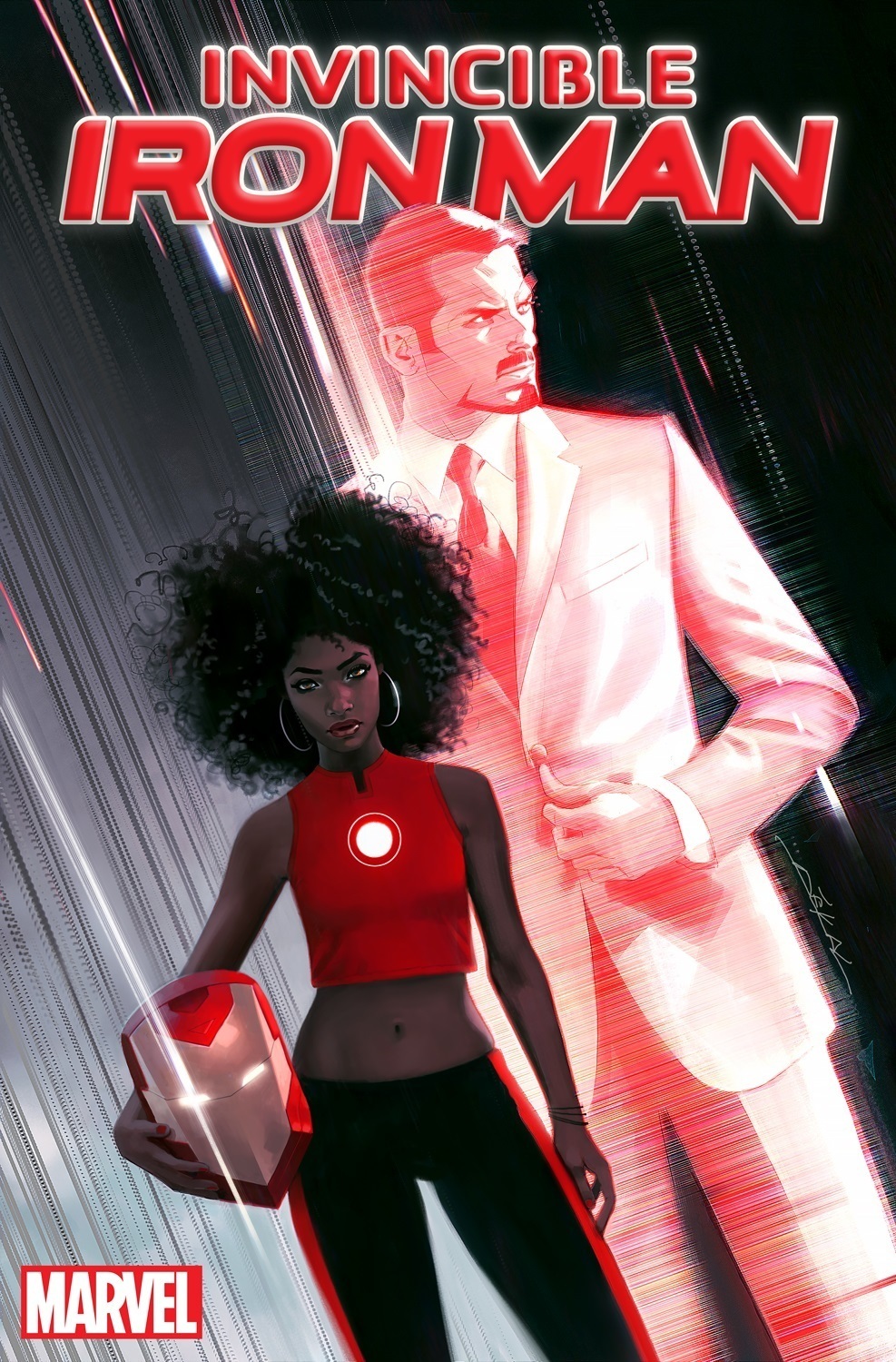 The cover of Invincible Iron Man, with art by Jeff Dekal.

Her name is Riri Williams. She reverse-engineered her own version of the Iron Man battlesuit in her MIT dorm room, got kicked out, and struck out on her own to do the superhero thing. Clumsily at first, but she's learning fast. So fast she's impressing Tony Stark, who's questioning his status as the Marvel Universe's go-to, super-powered Campbell's soup can. Readers first met her in the March issue of Invincible Iron Man.

And according to an interview in TIME with Brian Michael Bendis, who's writing both that Iron Man title and this summer's comics crossover event, Civil War II, she's about to take over for Tony Stark when Invincible Iron Man relaunches in the fall.

It's the latest in a series of moves that's slowly but steadily transforming the Avengers' roster from a team with more white dudes than a Harold Bloom syllabus into a super-group that more accurately reflects the world off of the comics page.

First came Miles Morales, a black Latino kid who stepped into the role of Spider-Man. Next came Kamala Khan, a teenage Muslim from New Jersey who assumed the title of Ms. Marvel, and America Chavez, a Latina lesbian who adopted the name of Golden Age hero Miss America. Recently Sam Wilson, the former Marvel hero The Falcon, took over as Captain America (not for the first time). Two years ago, Jane Foster, the girlfriend of Marvel's resident God of Thunder, replaced him, becoming the female Thor.

It's worth noting that in every one of these cases, the new character has simply assumed an existing hero's shtick. That's because it takes years for brand-new characters to establish themselves, if they ever do; there's certainly no guarantee readers will accept an original hero in a genre as steeped (read: wallowing) in history as mainstream superhero comics.

Having a new character take on the name and powers of a long-established hero offers an effective shortcut, and one that assures three different but coequal outcomes:

2. A subset of hardcore fans who believe superhero comics should be fixed in a permanent, "iconic" stasis (read: should always remain exactly the way they were when these fans were thirteen years old) will rise up in protest; and

3. Readers who have rarely seen themselves represented in superhero comics in such a high-profile way — people of color, LGBT people, people of different faiths — will at least investigate a new take on a character. Whether or not they stick with it depends, of course, entirely on the execution; representation does not guarantee readership, nor should it. But comics, like any medium, grow more interesting, more relevant, and more revelatory as they grow less monolithic. And that's what moves like this set out to do.

In that interview in TIME, Bendis was asked why it's taken so long for changes like this to occur in comics. He said:

Talking to any of the older creators, it's the thing they said they wish they'd done more of — reflecting the world around them. It just wasn't where the world was at at that time. Now, when you have a young woman come up to you at a signing and say how happy she is to be represented in his universe, you know you're moving in the right direction.