Accessibility links
Your Complete Guide To The Possible Anti-Trump Rebellion At The RNC Longtime Republican rule-makers are coming together to try to block the "Stop Trump" movement at the GOP's national convention in Cleveland. 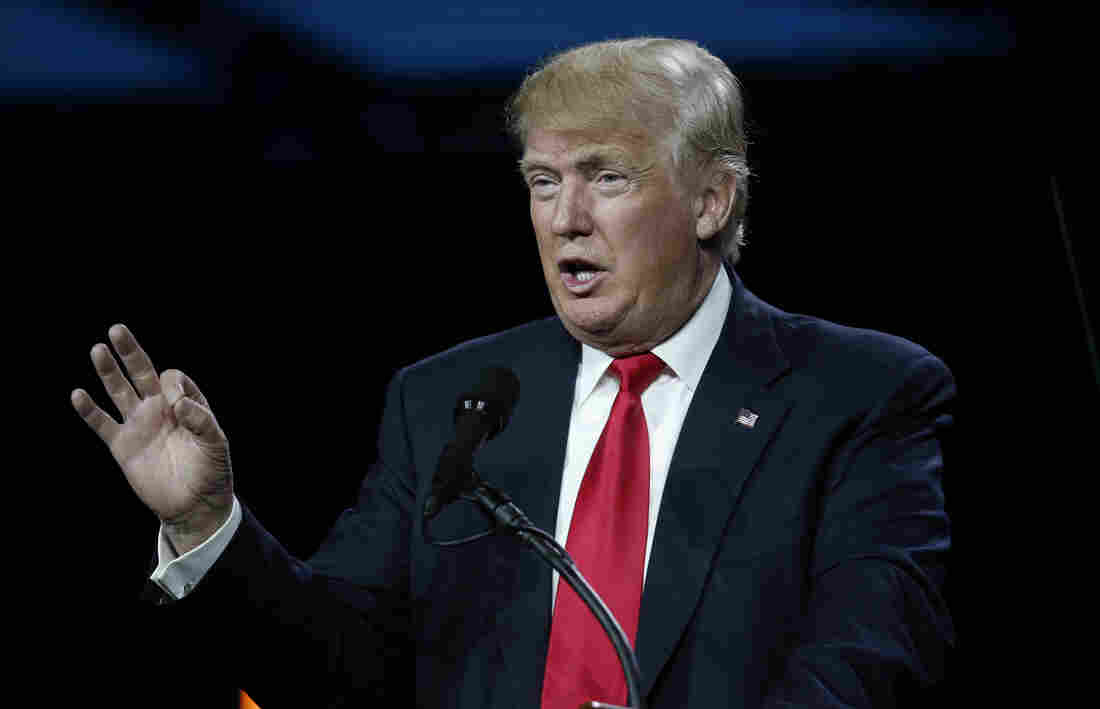 Donald Trump speaks at the Western Conservative Summit in Denver. Longtime Republican leaders have come together to try to block anti-Trump groups at the national convention. David Zalubowski/AP hide caption 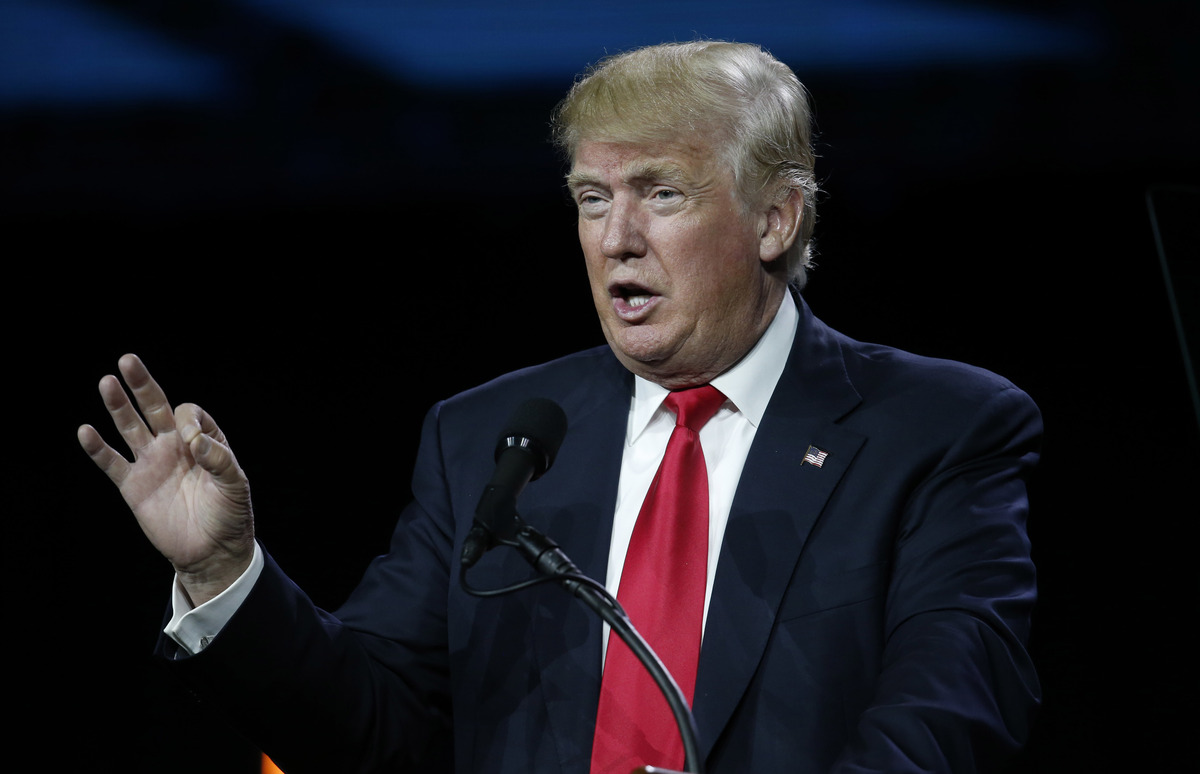 Donald Trump speaks at the Western Conservative Summit in Denver. Longtime Republican leaders have come together to try to block anti-Trump groups at the national convention.

The battle to control the Republican National Convention in Cleveland — and the fate of the party — has reached a turning point.

While the "Stop Trump" movement has unleashed a barrage of cross-country phone calls and emails to seek support for its proposals, a group of longtime Republican rule-makers, some working with the Donald Trump campaign, has quickly coalesced to try to block them.

Those Republican rule-makers are also going on offense by proposing what would be relatively historic changes to take some power away from convention delegates this year and close more primaries to non-Republicans the next time around.

There are no rules for the Republican convention. Not yet.

The rules will be determined the Thursday and Friday before the convention by the 112-member (aptly named) Convention Rules Committee. Traditionally, those rules control the convention and govern the next four years for the party.

Enter several anti-Trump GOP groups who broadcast their missions as their names: "Free The Delegates," "Delegates Revolt," "Unbind the Delegates" and "Courageous Conservatives."

This is not [about] those who didn't win. This is historic and focused on the fitness of the nominee.

They are all pushing to change the convention rules so that delegates may vote as they choose, or vote their conscience, when picking a nominee. "Conscience" is the dominant word within the movement. Within these groups, voting by conscience means that delegates would not have to vote as originally bound by their state.

Political translation: Delegates would not have to vote for Trump.

"It's very organic, very grass-roots," said Regina Thompson, an RNC delegate from Colorado and former state organizer for Ted Cruz. A devoted Tea Party member, Thompson has found herself going to a convention where, she believes, most of the delegates do not support their nominee. She co-founded Free The Delegates and is now helping coordinate the anti-Trump coalition.

"This is not [about] those who didn't win," she said. "This is historic and focused on the fitness of the nominee."

Thompson was gearing up for the next temperature check for the movement: a conference call Tuesday night. Meantime, she and others keep calling and emailing.

Solomon Yue says those emails from the Stop Trump movement to delegates are unrelenting — arriving as often as every five minutes. Now, at his direction, everything containing the word "conscience" goes to his junk mail.

I want to defend ... constitutional principles. The most important one is the rule of law.

Yue, a Republican National Committee member from Oregon and longtime rules expert, is trying to block the revolt by proposing that any changes made by the convention rules committee go into effect only after the convention.

It would be a modern first, but Yue argues it's necessary. "I want to defend ... constitutional principles. The most important one is the rule of law," he said. "That is the cornerstone of this Republican Party."

By "rule of law," Yue means the party's clearly drawn rules process. It is lengthy. A standing committee meets regularly for years to hash out potential changes to rules. That group essentially recommends the rules to the convention committee, which usually approves with a few revisions.

But through smart organizing, Cruz supporters were able to win a significant number of spots on the rules committee this year. Adding to that possible rebellion are a few John Kasich and Marco Rubio delegates and a few publicly uncommitted RNC officials who are nervous about Trump.

This is why Yue wants to bypass the convention rules committee this year, giving it power only over future rules.

In one sense, he wants to do something that reads almost paradoxical: Block the 2016 Convention Rules Committee from making any changes to the 2016 convention rules. But Yue believes that anti-Trump rules changes would be a political power grab and may not be in the long-term interest of the party.

As it gets buzz among rules stalwarts and Trump supporters, the Yue amendment also has activated the anti-Trump rebels, who posted a petition opposing it Friday night.

The Trump campaign, meanwhile, is calling some rules committee delegates one by one, according to what several delegates told PBS NewsHour. And it has set up a "study group" to track potential rules problems or changes and keep the candidate informed.

That includes Illinois delegate Demetra Demonte, a former RNC secretary. "I'm a strong conservative," she told NewsHour. "I know our candidates have warts, but 14 million Americans voted for Donald Trump." (It is 13.3 million according to RealClearPolitics.)

"If their conscience will not allow them [to vote for Donald Trump], what about those millions and millions of people who did vote?" she said. "Do they really want to disenfranchise those people?"

The Stop Trump movement has not limited itself to the fight within the rules committee.

There are two other ways it hopes to derail the presumptive nominee: 1. Get a court to rule that delegates are not bound to any specific candidate, and 2. Convince delegates they are already unbound.

On Thursday at 10 a.m., a courtroom in Richmond, Va., will witness a strange political display: a Democratic attorney general fighting on the side of Donald Trump.

Virginia Attorney General Mark Herring is defending a state law — similar to those across the country — that requires that political party convention delegates vote as their party rules dictate. Breaking those rules is a criminal misdemeanor that could incur a fine of up to $2,500 or jail time of up to 12 months.

Challenging that idea is Carroll "Beau" Correll, a delegate to the Republican convention who lives in Winchester, Va. Correll has received a wave of threatening and angry messages since he filed his lawsuit last week.

"It's a bit Wild West," he told NewsHour. "But you know, when you believe in something, you have to fight for it."

What Correll believes is that state requirements on convention delegates are unconstitutional, violating the First Amendment by blocking what he sees as a form of political speech: his convention vote. His quest is aided by superstar conservative attorney David Rivkin, one of the lead litigators who challenged the Obamacare individual mandate at the Supreme Court.

The lawsuit's value is mostly symbolic, aimed at getting a court to send a message to delegates.

In response, Herring argues that party convention delegates agree to a process that is not governed by the state but is instead controlled by private political parties. He submits that delegates sign a contract with the party and must follow it.

Finally, those who would block Trump are trying to make a broader argument: that GOP rules do not require delegates to vote as they are bound.

The idea came from Curly Haugland, a North Dakota Republican National Committee member who sent out a letter in March about modern GOP convention history, which lit up interest on the Internet.

He points to the 1976 convention, when supporters of then-President Gerald Ford pushed through a rule to bind delegates, something that proved critical in their victory over a surging Ronald Reagan. Four years later, Haugland writes, the GOP rescinded that binding rule as Reagan came to power.

As a result, he and others argue that delegates can vote their conscience now.

Of course opponents reject this, pointing not only to state laws but to the extensive party documents outlining the delegate allocation and election process — documents that anyone running to be a delegate pledged to uphold and follow.

"This whole business about conscience is without merit," said Bruce Ash, chairman of the RNC's Standing Rules Committee and one of the most critical players in the convention fight.

"When you consider the delegate selection plans which were filed by all 50 states and six territories in 2015 ... their duty is to do only one thing and that is to cast one vote in favor of the candidate to whom they are bound," Ash said.

For Ash, this is not directly about Trump. The longtime RNC member has not backed any specific candidate publicly but told NewsHour that Trump was not his first choice.

And that may be the greatest obstacle to the Stop Trump movement: For many of the decision-makers at the convention, this is not about a single nominee. This is about doing things properly, about not changing the rules at the last minute.

And especially about not overturning the will of primary voters.

If you change the rules, "why do you have primaries? Why caucuses? What's the purpose?" asked Peter Feaman, a Republican National Committee member from Florida. "Only so when you get to convention that if a minority of people don't like the outcome, they can change it? No. No."

Trump opponents counter by arguing that the 2016 Republican process was hijacked. They believe large numbers of Democrats and independents were responsible for some of Trump's largest wins.

Others point out that Trump won in states with closed, or Republican-only, primaries as well.

But the conversation is raising a long-discussed and more party-unifying rules idea, one that Democrats and independents should note, too.

"There is great interest in closing [more] primaries, so the individuals who select our nominee are Republicans," Ash told NewsHour. He said former Virginia Attorney General and Cruz supporter Ken Cuccinelli is organizing the effort.

The exact method of closing more primaries is unclear, but it would very likely involve some kind of incentive, making it in the state parties' interest.

"I agree with that 100 percent," said Correll, the man behind the lawsuit aiming to unbind delegates. "I think most in the Free The Delegates movement are supportive of that."

This story comes from PBS NewsHour.