Accessibility links
Hillary Clinton And Gov. Mark Dayton React To Deaths Of Sterling And Castile The deaths of two black men at the hands of police within two days has prompted responses from Hillary Clinton, Bernie Sanders and President Obama. 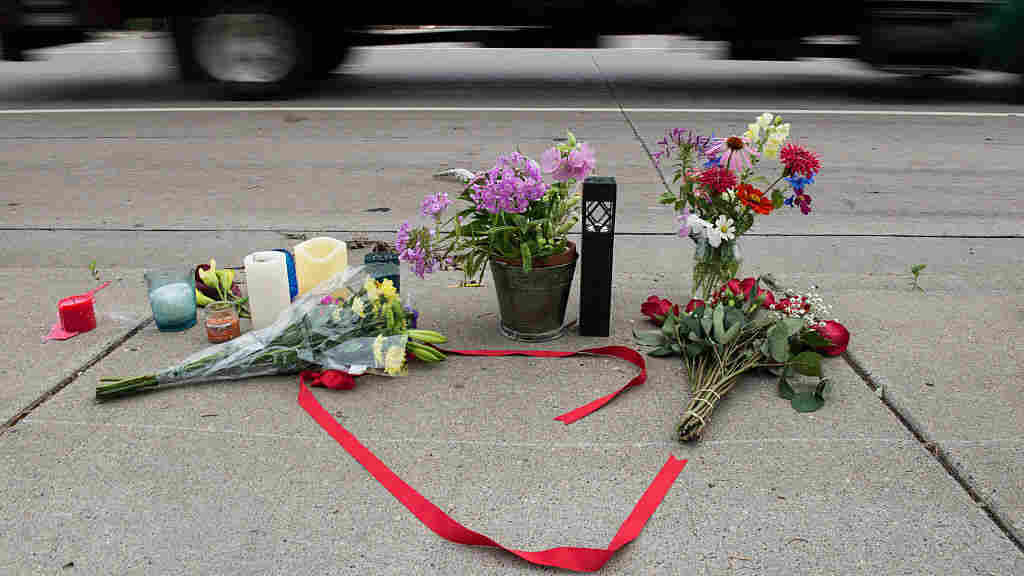 A memorial is left on July 7 for Philando Castile, following his death by a police officer in Falcon Heights, Minn. Stephen Maturen/Getty Images hide caption 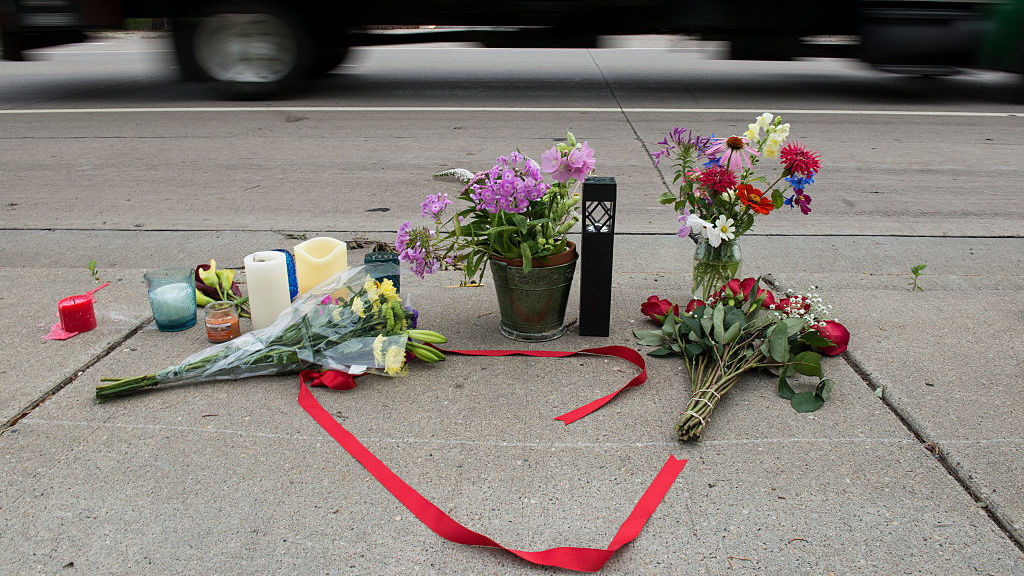 A memorial is left on July 7 for Philando Castile, following his death by a police officer in Falcon Heights, Minn.

On Tuesday, Alton Sterling, a black man, was shot and killed by police outside a convenience store in Baton Rouge, La. The Department of Justice is investigating his death, which was captured on video.

Then on Wednesday, Philando Castile, another black man, was shot and killed by police during a traffic stop in a suburb of St. Paul, Minn. His girlfriend used Facebook to broadcast the immediate aftermath of the shooting. His mother pointed to a larger pattern of police killing African-Americans.

Some politicians were quick to respond, while others have remained silent.

"Would this have happened if ... the driver and passenger were white? I don't think it would've," Dayton said at a press conference Thursday. "So I'm forced to confront and I think all of us in Minnesota are forced to confront that this kind of racism exists."

Earlier that day, Dayton addressed protesters outside his home, calling the killing a "senseless tragedy." He said he spoke with President Obama's chief of staff, Denis McDonough, and said he would urge the U.S. attorney general and the head of the Justice Department's civil rights division to open whatever investigations they deemed appropriate.

When he said the incident was not the "norm in Minnesota," a protester responded, "It's normal for us."

Dayton was quiet for a moment after, but promised that "justice will be served in Minnesota."

Nationally, here's what the president, presidential candidates and other politicians had to say:

The president spoke about the shootings upon arrival in Poland Thursday evening. "There's a big chunk of our fellow citizenry that feels, because of the color of their skin, they're not treated the same. And that hurts," he said. He called on Congress to pass criminal justice reform and for Americans to sympathize with protesters and others "expressing outrage" and holding vigils.

"I would ask those who question [protesters to] step back and think, 'What if this happened to someone in your family? How would you feel?' " Obama said.

Obama also said that while he wouldn't comment on specifics of this week's shootings, they were "symptomatic of a broader set of racial disparities that exist in our criminal justice system."

"To be concerned about these issues is not to be against law enforcement," he said.

Earlier Thursday, Obama posted a lengthy reaction to both shootings on his Facebook page. In it, he said that all Americans should feel "deeply troubled" by the killings and that he was encouraged that the U.S. Department of Justice had opened up an investigation in the Louisiana case. He went on to allude to a broader pattern of police violence against African-American men:

"But regardless of the outcome of such investigations, what's clear is that these fatal shootings are not isolated incidents. They are symptomatic of the broader challenges within our criminal justice system, the racial disparities that appear across the system year after year, and the resulting lack of trust that exists between law enforcement and too many of the communities they serve.

To admit we've got a serious problem in no way contradicts our respect and appreciation for the vast majority of police officers who put their lives on the line to protect us every single day. It is to say that, as a nation, we can and must do better to institute the best practices that reduce the appearance or reality of racial bias in law enforcement."

The statement ended by urging Americans to ensure "a future where all of our children know that their lives matter."

On Wednesday, Hillary Clinton released a statement reacting to the death of Sterling in Louisiana. Like President Obama, Clinton's statement also alluded to the larger pattern of African-American deaths at the hands of police officers, saying, "too many African American families mourn the loss of a loved one from a police-involved incident." Clinton also said she was glad that the Justice Department is investigating the killing.

The statement went on to propose several strategies to combat the issue:

America woke up to yet another tragedy of a life cut down too soon. Black Lives Matter. #PhilandoCastile -H

"We need to ensure justice is served. That begins with common sense reforms like ending racial profiling, providing better training on de-escalation and implicit bias, and supporting municipalities that refer the investigation and prosecution of police-involved deaths to independent bodies. All over America, there are police officers demonstrating how to protect the public without resorting to unnecessary force. We need to learn from and build on those examples."

We need real criminal justice reform so that people can walk down the street without worrying about whether they'll get harassed or shot.

Thursday morning, Clinton tweeted a second reaction, this time to the death of Castile in Minnesota. This tweet was signed with an H, an indication that Clinton herself wrote it.

The violence that killed Alton Sterling and Philando Castile has become an all too common occurrence for people of color and IT. MUST. STOP.

Although not the presumptive Democratic nominee, Sanders has remained in the presidential race. He wrote several tweets condemning the two deaths:

And also called for changes to the criminal justice system.

At the time of publication, Donald Trump, the presumptive GOP nominee had not publicly reacted to the deaths of Castile or Sterling.

However, in an August 2015 appearance on Meet The Press, Donald Trump was asked about the Black Lives Matter movement. His response:

"It's a massive crisis. It's a double crisis. What's happening and people. You know, I look at things. And I see it on television. And some horrible mistakes are made. At the same time, we have to give power back to the police because crime is rampant."

In January of this year, Trump said that police are the "most mistreated people in this country" during a GOP debate on Fox.

If a statement is released or if Trump tweets any reactions to the recent killings, this post will be updated accordingly.