Accessibility links
'Pet Sounds' And The Band That Gets To Play It Onstage To celebrate the anniversary of his masterpiece, Brian Wilson is taking Pet Sounds on tour with a band of musicians who grew up on its songs and sounds. 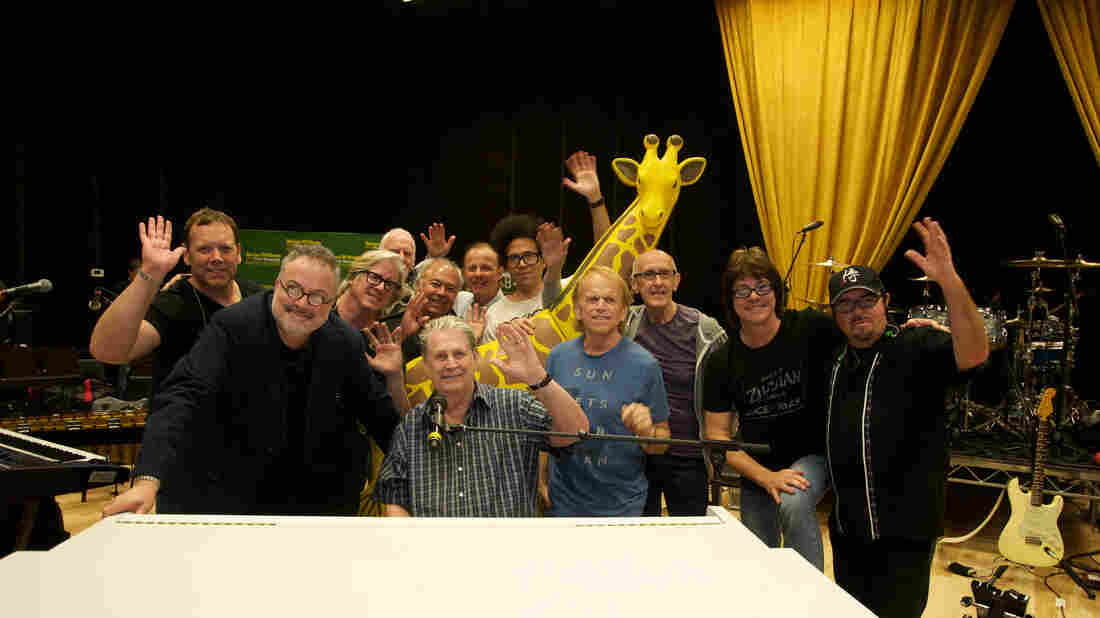 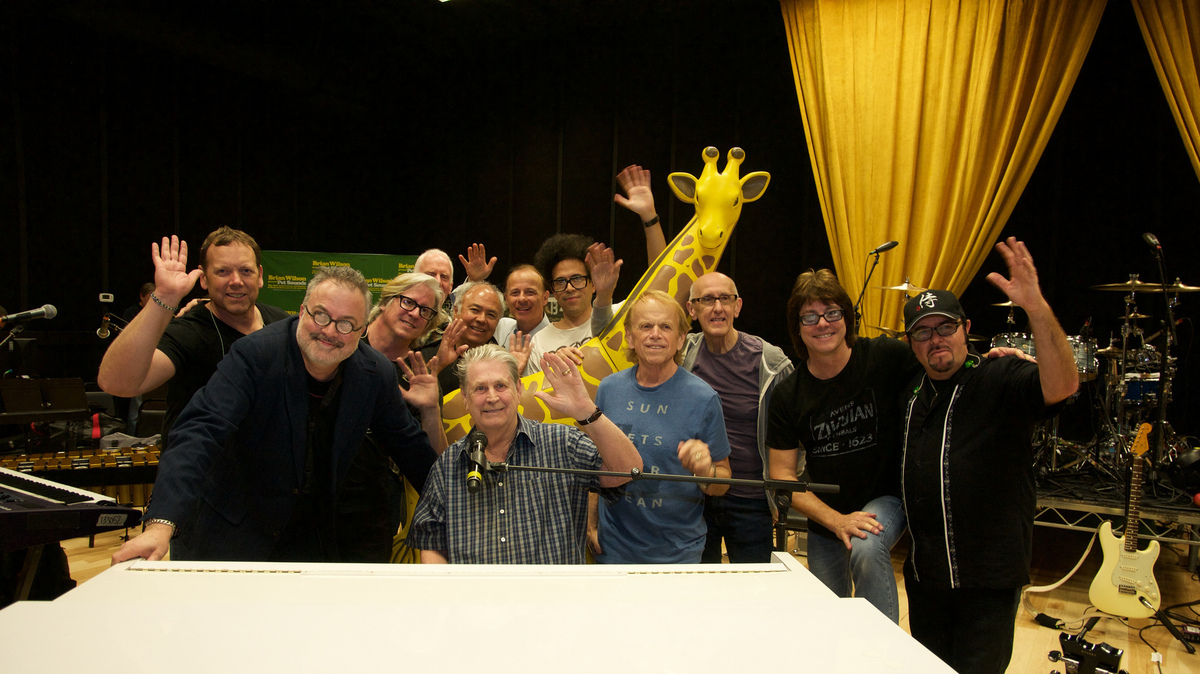 Brian Wilson with his touring ensemble — a team-up of California band the Wondermints, a host of Chicago musicians, fellow Beach Boy Al Jardine and more.

When musicians Nick Walusko and Darian Sahanaja first met in Los Angeles back in 1983, they immediately bonded over their shared passions: movies, sci-fi and the mysteries of 1960s pop. The two spent countless hours poring over records by bands like Buffalo Springfield, The Mamas & the Papas and The Beach Boys, "just taking apart music and figuring out how all the parts work together," Walusko recalls.

"Dissect" sounds like — very clinical of a word," Sahanaja adds. "But it's just more about, like, what is it that brings those feelings out?"

Trying to answer that question eventually led them to form their own band, the Wondermints, with Walusko on guitar and Sahanaja on keyboards. Along with bassist Jim Mills and drummer Mike D'Amico, the band released a slew of albums, and was even tapped by Mike Meyers to provide music for the first Austin Powers movie.

One night in 1999, the band was performing at a Brian Wilson tribute concert in Hollywood when they caught the ear of a surprise guest.

As Sahanaja recalls, "We were performing the song 'This Whole World'" — a Beach Boys song – "and Brian was in the dressing room. The story is that he perked up and said, 'Wow, what is that? Who's that? What song is that? They sound great!'"

"Somebody actually had to remind him, Brian, that's your song!" Sahanaja says.

"I was surprised — they knew all my songs!" Wilson remembers. "And they were so good, I said, 'Would you guys consider being my backup band for my solo career?' And they said they'd love to."

They were more than ready. Every member of the Wondermints was a diehard fan, and they'd spent years exploring the emotional pull of Wilson's music. Multi-instrumentalist Probyn Gregory, who was playing horns with the band by then, recalls his reaction when he first heard Wilson's masterpiece, Pet Sounds:

"It was like he made manifest in an audio fashion what it was like to go from a teenage boy into a man," he says. "That's part of what Pet Sounds is really about."

Sahanaja, Walusko, D'Amico and Gregory joined a group of Chicago musicians who had recorded with Wilson on his 1998 album Imagination. Rather than choosing one band over the other, combining the two into a pop orchestra turned out to be the best solution.

"That is, if you want to do the music justice," Sahanaja says. He explains that "Brian's music has always been more orchestral, more ensemble based ... those productions, they've got string sections, they've got all these accordions, harmonicas, all sorts of really exotic instruments. And that's on top of a four or five-piece, sometimes even more, vocal harmony ensemble." Almost every member of the band sings, and Sahanaja oversees the complex vocal arrangements that come across seamlessly onstage.

"We want to bring the album as recorded to the stage," says Von Mertens, who also serves as bandleader, "and we want it to be alive — to be a living performance of the music as it was created at that time. So it's really not about learning the parts or learning the notes. It's like, okay, how are we gonna make this really come alive, how are we gonna go more deeply into the music, and go to that place where the really magical stuff happens?"

It's a big responsibility. In creating Pet Sounds back in 1966, Wilson used every instrument at his disposal — and some unexpected, sometimes whimsical, sonic touches. Percussionist Nelson Bragg points out one such moment at the end of the song "You Still Believe in Me."

"It's a very childlike song, a beautiful song, and there's a bicycle bell and a bicycle horn," Bragg says. "Brian wanted that in the song, to accentuate the innocence."

It's Bragg's job to play those notes onstage — though in preparing to add that part of the arrangement, the group ran into a slight problem. "We went out and got a bicycle horn," Gregory recalls. "Now that song is in B, and the note they actually need is C#. All the bicycle horns we found were in D."

So Gregory drew on his classical music training. As a French horn player, he knew that putting your hand into the bell makes the note go flat. He decided to try the same thing with the bicycle horn — and it worked. "I took half a clothespin to fit down there ... and created this altered horn," Gregory says. "It took a while, but it was worth it."

"Brian makes musicians think like that," Bragg adds. "It's like, how far do I need to take this, in terms of authentically reproducing the genius that he created in the studio when he was 23, 24 years old?"

That level of dedication to Wilson's muse is felt by every member of the band. "There are lots of people who could just play the notes," Von Mertens says. "But everybody in the band brings something special to the music: a special understanding, a special ability that takes the music to a deeper level. And what people are hearing are not just a bunch of musicians playing the notes, but really reaching for the deeper meaning of the music and conveying that to the audience."

The band has more in common with audience members than the latter might guess.

"We're really just not rock stars, you know?" Bragg says. "We're really musicians that are interpreting this guy's music. Ultimately, I am a record collector and a music fan first, and I'm a musician second."

Sahanaja agrees that being a music fan first is essential to making Wilson's music come alive onstage. It's more than an oldies act, or a bar-band rendition of the Beach Boys' greatest hits.

"There's a love, there's a feel about it," he says. "And that only just comes from listening to those records, and being moved by those records. And that's what we have been."

As for Brian Wilson, performing Pet Sounds live has been a thrill.

"My favorite time is when we do our concerts," he says. "That's what I live for."

He seems to have gotten as much from his bandmates as they've gotten from him.

"Right after we do our concerts, and we all walk offstage they go, 'Brian, you sang great tonight!'" Wilson says. "They always give me good cheer, and good compliments. I don't think I could have done it without them."