Accessibility links
As Country Reels From Violent Week, Clergies Offer Messages Of Healing The fatal police shootings of black men followed by the killings of five police officers have given members of the clergy much to think about. What will they be saying to their congregations? 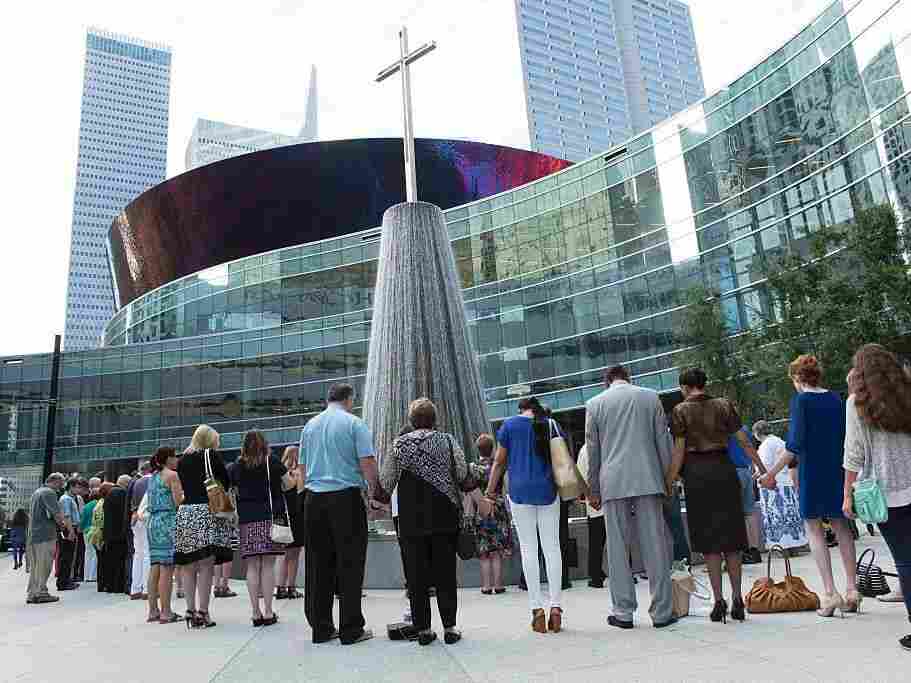 Parishioners of First Baptist Church in Dallas, Texas, gather on July 10, 2016, to pray for the five police officers killed when a man used a high-power rifle in a sniper attack at a protest in Dallas late July 7. Laura Buckman/AFP/Getty Images hide caption 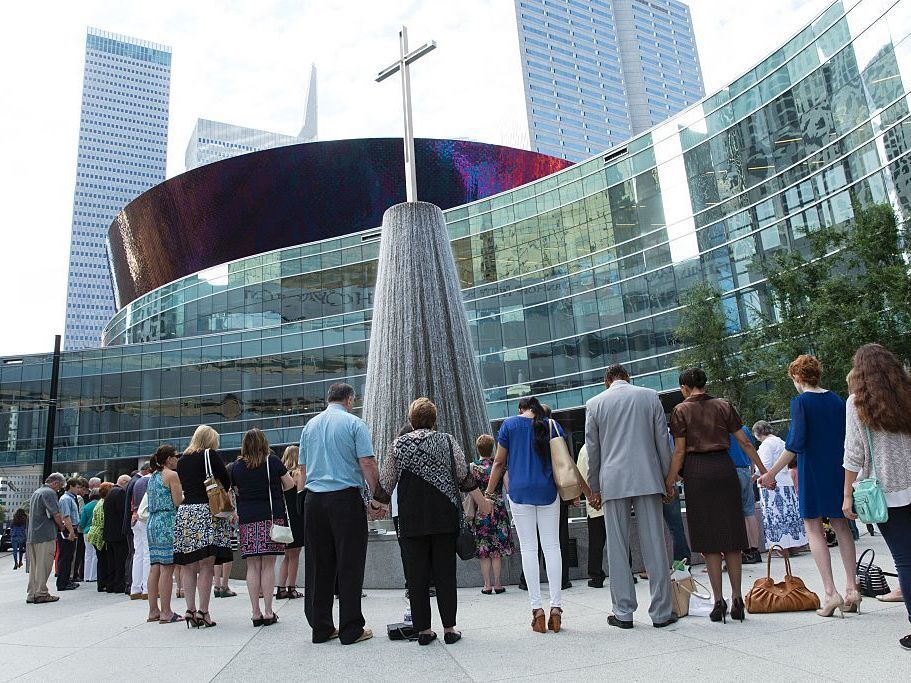 Parishioners of First Baptist Church in Dallas, Texas, gather on July 10, 2016, to pray for the five police officers killed when a man used a high-power rifle in a sniper attack at a protest in Dallas late July 7.

In churches across the country, pastors, priests and other religious leaders will talk to a nation still reeling from this past week's fatal shootings of two black men by police officers and the death of five police officers slain by a lone gunman. People often turn to faith during times of crisis — attending services and listening to sermons.

The Rev. Jacqueline King, pastor of the all-white First United Methodist Church outside Baton Rouge, La., says there's been so much anger and fear and so many protests over the shootings of Alton Sterling in Baton Rouge, Philando Castile in Falcon Heights, Minn., and the five police officers in Dallas, that we should follow the lead of 18th-century theologian John Wesley.

"It's time to start looking at our souls," says King, "not only the individual soul, but the soul of our country and congregation. You know, we are not well at this time."

The Days After: A Nation Reacts To The Week's Violence

At Wesley United Methodist Church, an all-black church in Baton Rouge, the Rev. Dr. Joe Connelly says there's no question that he would talk about Alton Sterling. Sterling died Tuesday after he was shot during an encounter with two white Baton Rouge police officers. Connelly says he wants to be able to help his congregation deal with any rage.

At an interfaith service at Concord Church, a predominantly black megachurch in suburban Dallas, pastor the Rev. Bryan Carter says the ambush of the Dallas police officers and the other shootings have made people feel unsafe.

"Fear can be incredibly crippling," he says. "But as people of faith, as believers in Jesus Christ, we understand that when our fear tries to take hold of us, we must look to our faith."

Another deadly encounter between a police officer and a black man prompted the Rev. Anne Swallow Gillis of Falcon Heights Church to hold a special service of "prayer and lament" Saturday night in the small suburb outside of St. Paul.

When Violence Is A Constant, How Do We Deal?

"We felt it was really important to do something for the community," says Gillis. "It was not about healing but simply naming the wounds and acknowledging the brokenness of our community."

The Rev. Jered Weber-Johnson, an Episcopal priest and rector at St. John the Evangelist Episcopal Church in St. Paul, says Castile's death was personal for many in his congregation. Some members or their children knew Castile. Weber-Johnson says Castile's death brought issues of race, injustice and policing to the front door of a mostly white community that often ignores them.

"The kindest and nicest of Minnesotans may have empathy," he says, "but they don't get involved because it didn't happen in our backyard. Unfortunately, it took coming to our backyard for so many to get angry."

Weber-Johnson and other ministers pledged to talk about the good Samaritan this Sunday. In the parable, Jesus tells the story of a Samaritan who helps a man who's been beaten and robbed. It's a story about loving one's neighbor, and even one's enemies. The Dr. Rev. Brian Herron, pastor at Zion Baptist Church in Minneapolis, says it's an apt message during today's troubling times.

Herron says he'll also tell his congregation that to overcome the trauma that seems to just keep coming, they all have to be very intentional about healing --and do what he calls "soul care."