Accessibility links
'Ask Polly' Columnist Heather Havrilesky Tells Advice-Seekers 'How To Be A Person In The World' It's not easy to be a person, but Heather Havrilesky of the "Ask Polly" column has some advice on how to follow your dreams, figure out career and family — and dump wishy-washy, noncommittal guys. 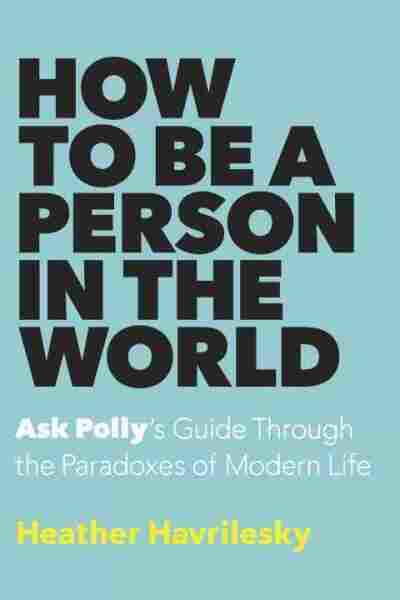 How to Be a Person in the World

Ask Polly's Guide Through the Paradoxes of Modern Life

The advice column has changed a lot since Ann Landers. It used to be advice handed down from a kind of wise aunt or uncle, but now it's more like your cool big sister who happens to swear a lot. A wave of Internet advice columns by women who weren't afraid to empathize with readers, like Cheryl Strayed and Mallory Ortberg, have modernized the form.

One of those advice givers is Heather Havrilesky. Her column, "Ask Polly," for New York Magazine's The Cut is profane and profound and really connected with young women, in particular. She has a new book out, called How To Be A Person In The World. And in it, she gives a lot of advice about love. "It's probably fair to say that I kind of have a soft spot for romantic travails as a subject," she tells NPR's Rachel Martin. "Mostly because I failed at romance over and over and over again as a young person. ... And I really feel, in particular, that women, you know, until we sort of find the right person, we tend to define ourselves as failures at love."

On fixing romantic problems versus learning to be happy alone

Kind of neither one. People ask me things like "Am I doing this or this wrong? How do I calibrate these sliders? And these, you know, how do I move these knobs to become more appealing to more men?" And I always say you're, you don't need to be appealing to a lot of men, actually. You just need to appeal to the one guy who's right for you in particular.

And I also don't say you should just want to be alone, either, because I think that it's unrealistic to encourage people — you know what? You can just do it on your own. Forget it. Write off love forever. — I mean, I believe in love. I'm a big believer in love.

... what I'm trying to tell people is you're filled with so much beauty and so much potential and so much brilliance. You just have to believe in it.

It's not that deliberate. It sort of is who I am. But I will say that when people say "Well, what qualifies you to give advice? Like, why don't you tell me why you deserve to be telling other people how to live?" My answer is, I don't know what to say to justify the fact that I'm telling people how to live. ... If I were the kind of person who walked around saying, "Well, you know, I have so much wisdom in my brain that I could share with you and I'm just going to drop a little knowledge on you, and then you'll go away with my special gift," I wouldn't be able to do my job in the same way anymore if I really thought that way.

I don't think I'm someone who's ever going to be high up on a mountain, looking down at all the sad mortals who are still struggling. I'm just a struggler by nature. I think a lot of people see themselves as these messed-up shells that need to be filled with something or these imperfect, bad, empty things that need to become better. And what I'm trying to tell people is you're filled with so much beauty and so much potential and so much brilliance. You just have to believe in it.