Accessibility links
In Dallas, An Already-Embattled Police Department Mourns Dallas police, reeling from last week's shootings, already suffer from low pay and poor morale. But citizens have been rallying around officers, suggesting the events could be a turning point. 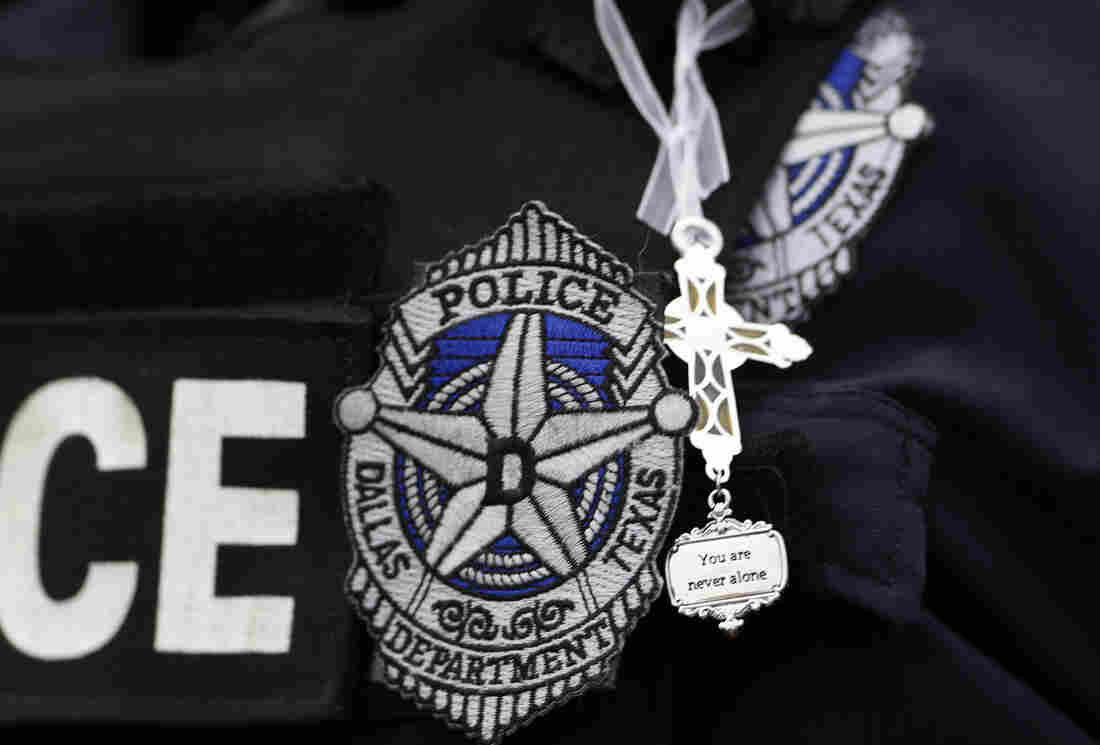 Dallas police officer Kimberly Howard wears a cross given to her earlier in the day by a random well-wisher outside department headquarters in Dallas on Saturday. Gerald Herbert/AP hide caption 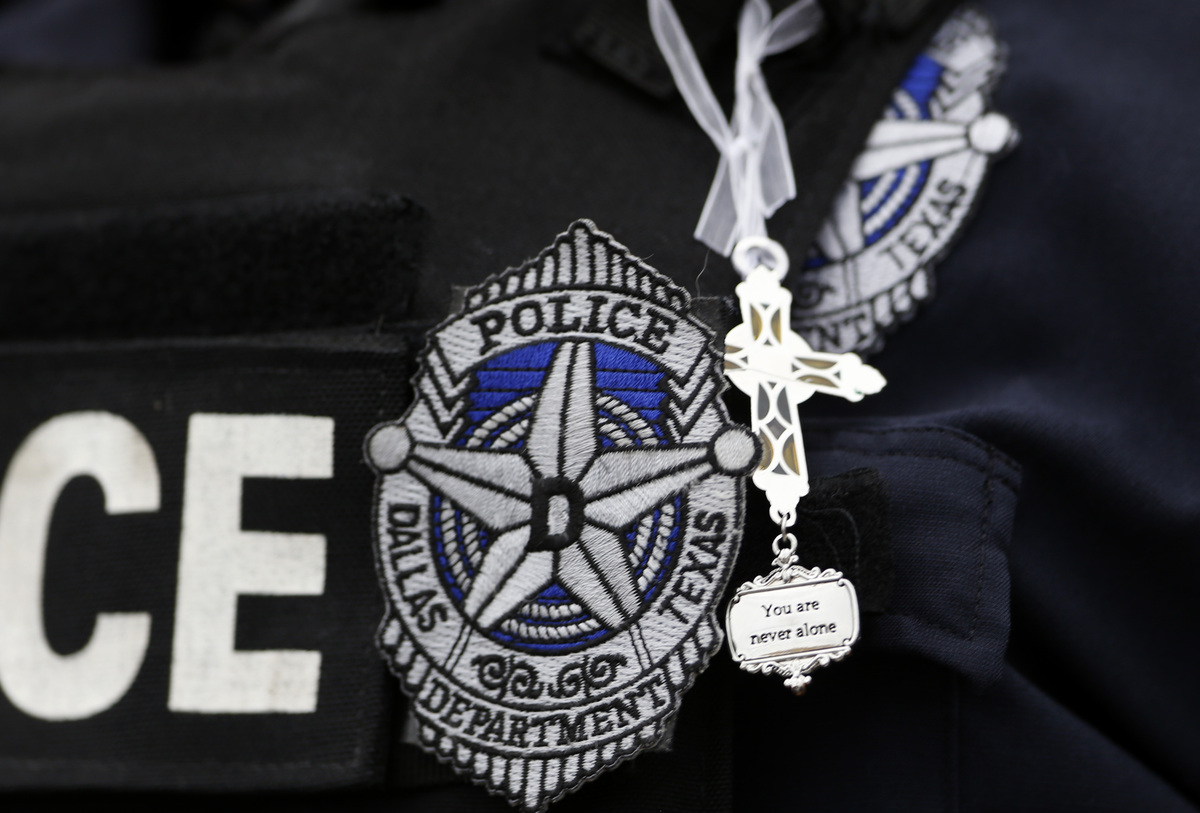 Dallas police officer Kimberly Howard wears a cross given to her earlier in the day by a random well-wisher outside department headquarters in Dallas on Saturday.

The calculated killing of five uniformed officers would be traumatic for any metropolitan police department in America, but it has fallen especially hard in Dallas, where the police force already suffers from low pay and poor morale.

Citizens in Dallas are rallying around their officers in blue, suggesting the events could be a turning point for the embattled department.

Since the July 7 rampage, heartwarming scenes of support for the Dallas police have unfolded in front of the fortresslike Dallas police headquarters. In one on Sunday, an African-American woman threw her arms around a white police officer. She buried her face in his beefy shoulder as tears streamed down her cheeks.

"So sorry that this happened," she said. "In Jesus' name bless him right now. Amen. I love you."

The officer she was hugging is a communications sergeant, Stephen Toth, who wiped away his own tears. This is, after all, a force that has not gotten a lot of love in recent years. A survey last year by the Dallas Police Association showed that nearly 3 in 4 officers responded that morale is "low" or "lowest ever."

"Pay is one issue, but it's even larger than even pay," Toth says. "I mean, who wants to come out and do this job, especially in light of seeing something like this?"

By "this," he means the coldblooded murders of five officers.

Dallas police are so underpaid that they routinely flee the force for smaller, neighboring departments or to cities such as Austin and Fort Worth, where starting pay at a lower rank is $10,000 to $15,000 better and health benefits are more generous.

The Dallas department — with about 3,500 sworn personnel — is currently short at least 200 officers.

"We're the lowest-paid department in the Metroplex. We're losing officers to suburbs at a tremendous rate," says Det. Ron Pinkston, president of the Dallas Police Association.

Dallas' elected leaders say they can't pay the cops more because of a looming police payroll lawsuit, a nearly broke pension fund and competing needs such as crumbling streets.

Fred Frazier, chairman of the Assist the Officer Foundation, says by his count, 94 officers have left DPD since October.

"I hate to see our profession in decline. We can't even get guys to come for recruiting. We've had to cancel the last two [police cadet academy] classes cause there's not enough guys who want to be police officers," Frazier says.

To be fair, this is not just a Dallas problem. Departments all over the country are losing young officers because of pay, workload and the recent challenges of policing in the glare of social media.

But even before last Thursday's attack, Dallas had an unusually turbulent department, in part because of its chief, David Brown, 55. Only three months ago, all four police associations in the city were bitterly complaining about Brown's dictatorial, mercurial management style; the Black Police Association went so far as to call for his resignation. Yet today, Brown is earning universal accolades.

"This is one of David Brown's finest hours," says James Ragland, a longtime Dallas Morning News metro columnist. "For him to step up in a moment of crisis and take full control and calm the city down, it's remarkable."

It remains to be seen whether Brown will be able to use his restored reputation to stabilize the ranks and calm his detractors — and whether the Dallas police, overall, will be able to leverage their newfound appreciation to get city government to give them a decent pay raise.