Accessibility links
Meet Hillary Clinton's Potential Vice Presidents In 100 Words The Democrat will already make history with her own nomination for president. Now the question is whether she wants to do it again with her choice of running mate by picking a second woman or Latino.

Hillary Clinton will already make history with her nomination for president, becoming the first woman to lead a major presidential ticket. Now the question is whether she wants to do it again with her choice of running mate.

Clinton is expected to name her vice presidential pick sometime after the Republican National Convention ends and before her own convention begins in Philadelphia on July 25.

On her list are several Hispanic lawmakers, African-Americans and at least one woman.

Latino politicians like Housing and Urban Development Secretary Julian Castro offer an appealing contrast to Donald Trump's controversial comments on Mexican immigrants, plus he would bring youth to her ticket.

She also has a close relationship with Labor Secretary Tom Perez, who is beloved by labor unions.

Ohio Sen. Sherrod Brown and Massachusetts Sen. Elizabeth Warren would excite supporters of Vermont Sen. Bernie Sanders. Brown has been a vocal opponent of free trade agreements and is one of the Senate's most liberal members, while Warren was the original progressive hero who has long railed against Wall Street.

But both Brown and Warren, along with New Jersey Sen. Cory Booker, have a big complicating factor — they come from states with Republican governors who would nominate their replacements if the Clinton ticket wins. And with control of the Senate hanging in the balance this November too, losing a Senate seat may be too risky of a gamble for Democrats.

Ultimately though, Clinton may go with a safer, non-historic pick. Virginia Sen. Tim Kaine is a solid choice who was a finalist in President Obama's search eight years ago. Kaine himself has admitted he is a "boring" choice, but boring isn't necessarily a bad thing in politics, and he does come from a swing state too.

That's the same with Agriculture Secretary Tom Vilsack, who has emerged as a late, top possible pick for Clinton. The former Iowa governor comes from an important state and is a longtime friend of the Clintons too.

Below are some of the potential candidates Clinton's team is weighing. Check out Trump's potential VPs here. 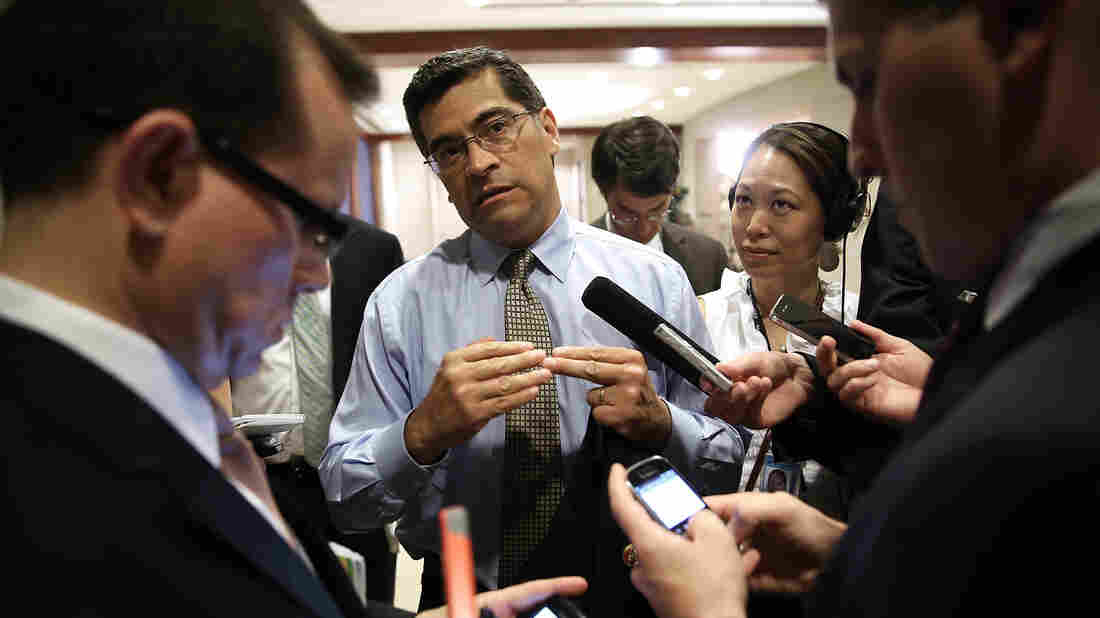 Rep. Xavier Becerra speaks to members of the media as he arrives at a closed briefing for members of the House of Representatives in 2013. Alex Wong/Getty Images hide caption 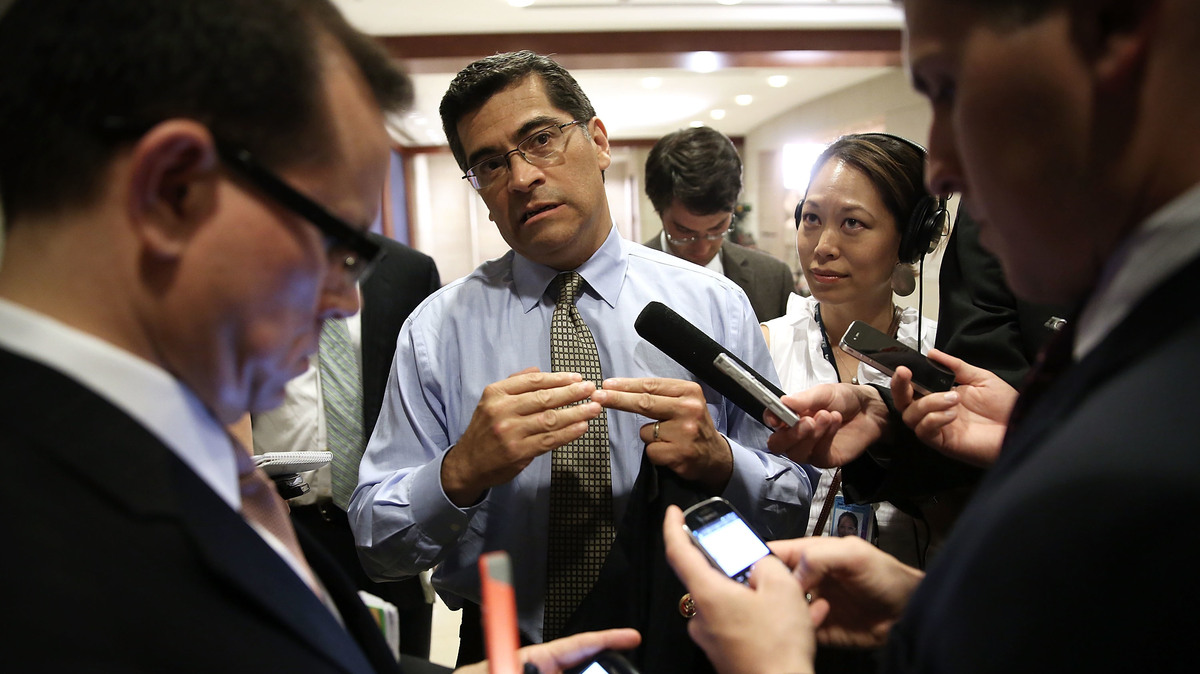 Becerra is the current chairman of the House Democratic Caucus, making him the highest-ranking Latino in the House. Elected to Congress in 1992, he previously served in the state Assembly and was the California deputy attorney general. In 2008, President Obama offered him the position of U.S. trade representative, but he turned it down, saying he would have more influence in Congress. Becerra has stumped for Clinton in both English and Spanish and could be a powerful voice for her on issues of immigration. Once a supporter of NAFTA, he now says he opposes it and voted against CAFTA. 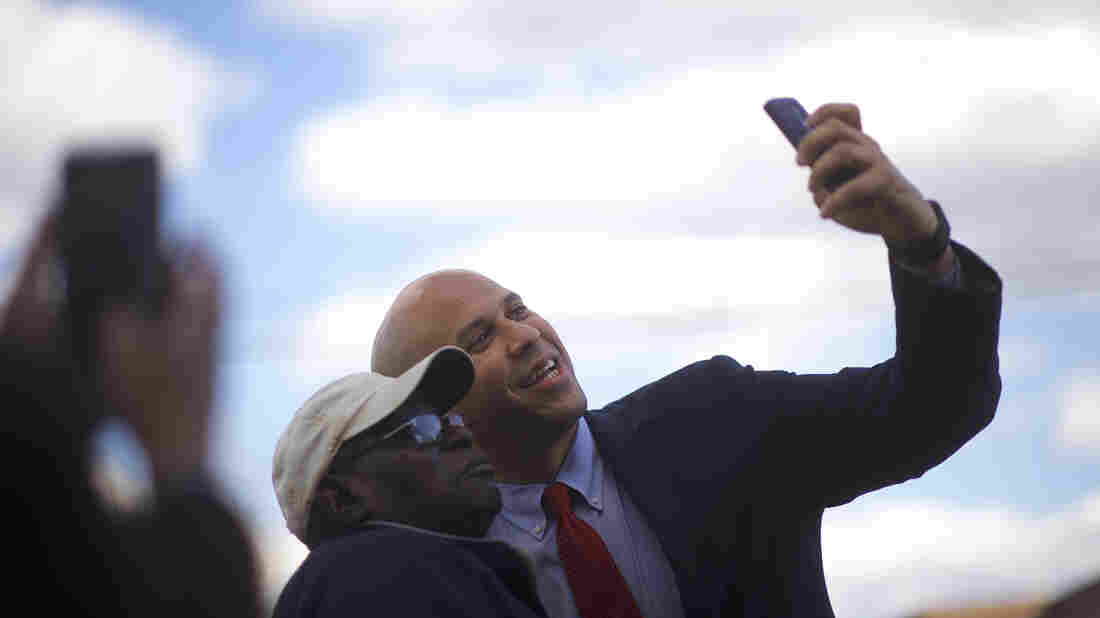 Sen. Cory Booker takes a photo with a supporter as he arrives at a campaign event for former Secretary of State Hillary Clinton in February. Mark Makela/Getty Images hide caption 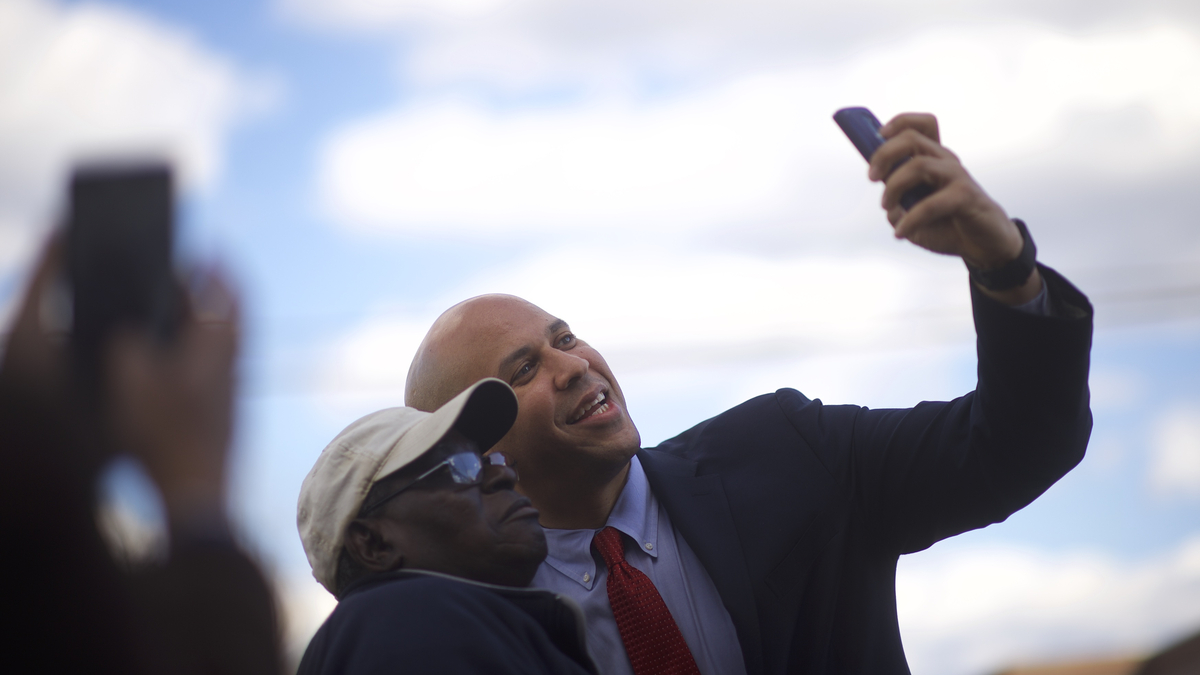 Sen. Cory Booker takes a photo with a supporter as he arrives at a campaign event for former Secretary of State Hillary Clinton in February.

Booker cultivated a popular social media presence and a national profile even before he was elected to the Senate in 2013. During his seven years as Newark mayor, he became well-known for shoveling residents' driveways after snowstorms, rescuing a woman from a house fire and living on food stamps. Booker could energize African-Americans and young voters. But as a freshman senator, his experience will be a question (even though he has served the same amount of time that Barack Obama did before becoming president). His attention-getting tactics also make him something of a wild card who could upstage Clinton. 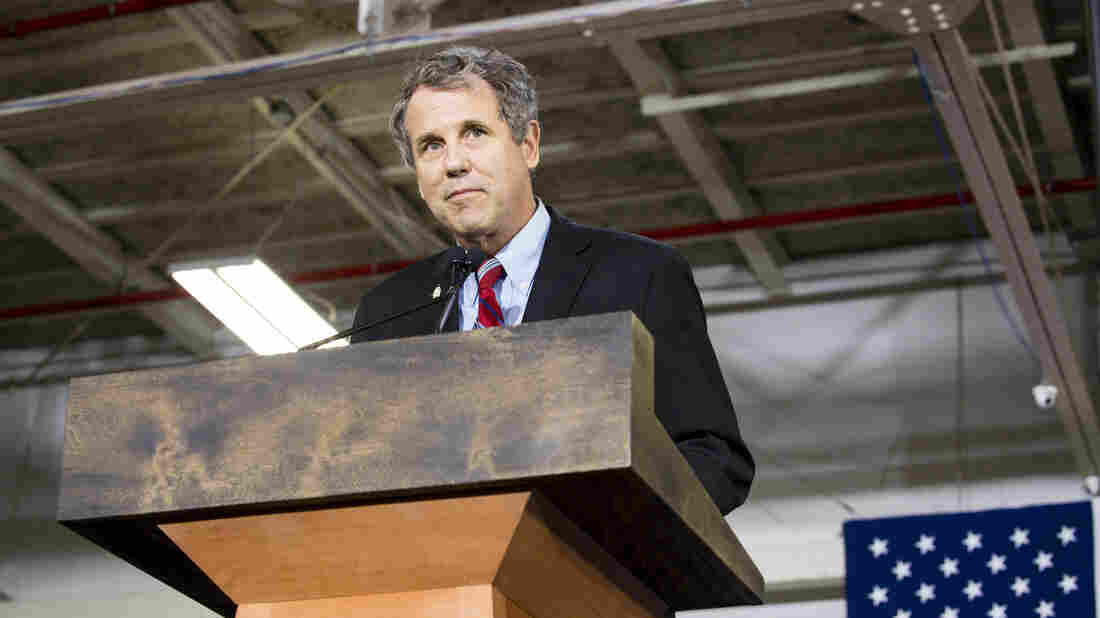 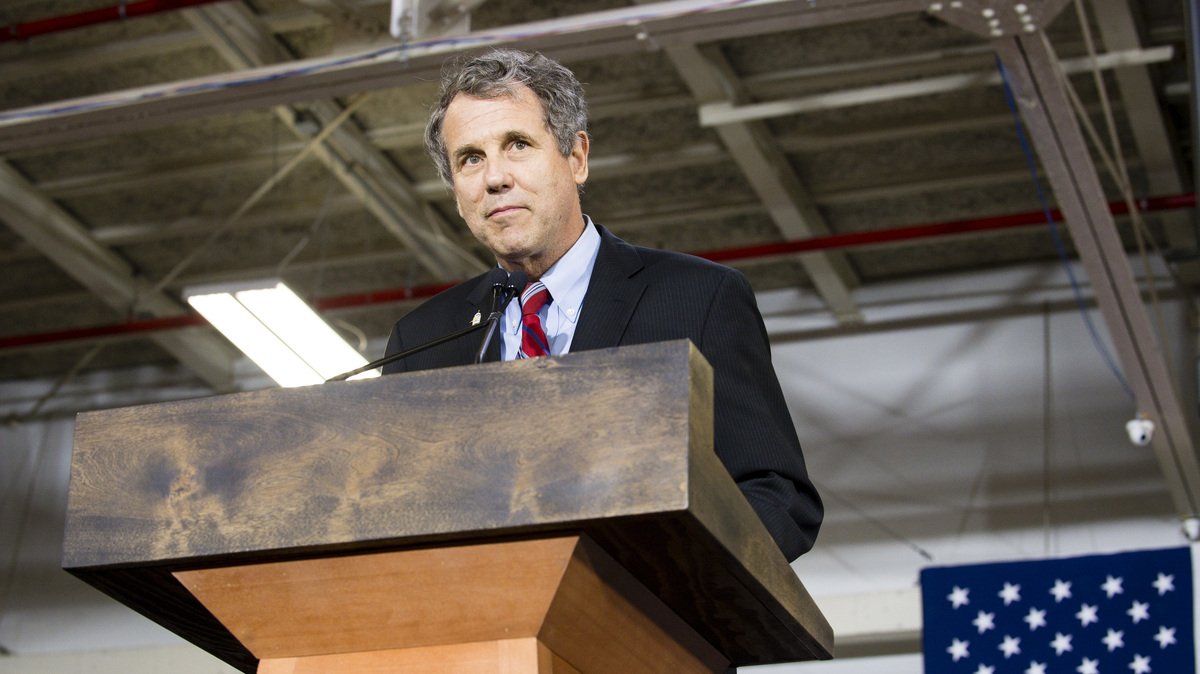 Brown, two-term senator of one of the most critical swing states, would bring a geographic advantage to a Clinton ticket. He also would help with reaching blue-collar Democrats who might be swayed by Donald Trump's populist appeal. He has been a strong surrogate for Clinton when it comes to labor issues. Brown is also a vocal opponent of free trade and critic of NAFTA, an issue where progressives who backed Sanders are skeptical of Clinton's recent conversion. Before being elected to the Senate in 2006, he served in the House for 14 years and was previously the Ohio secretary of state. 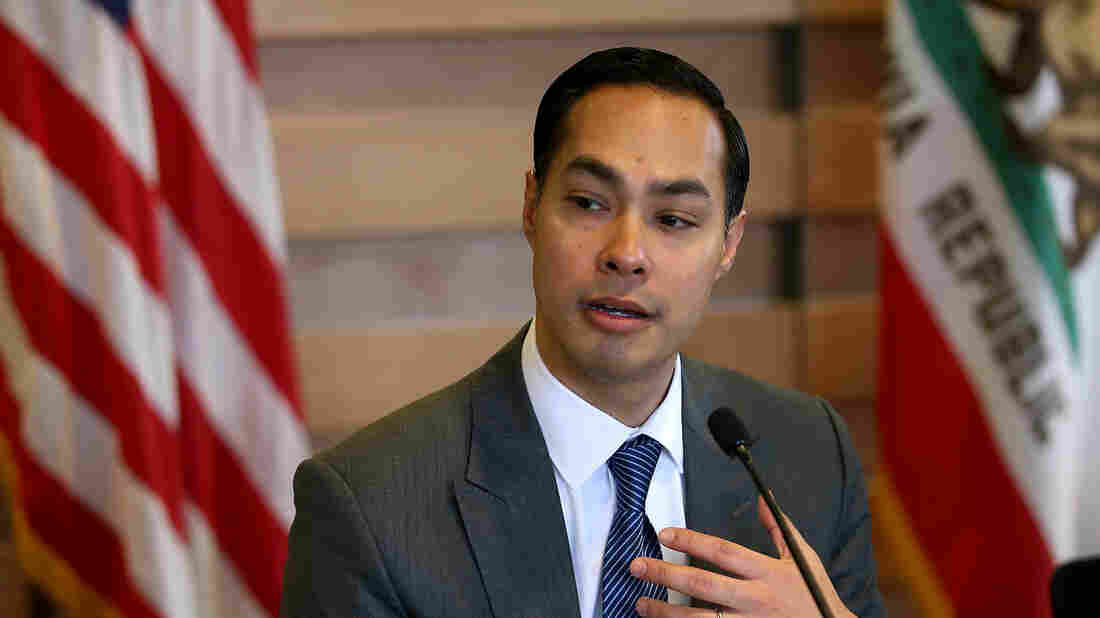 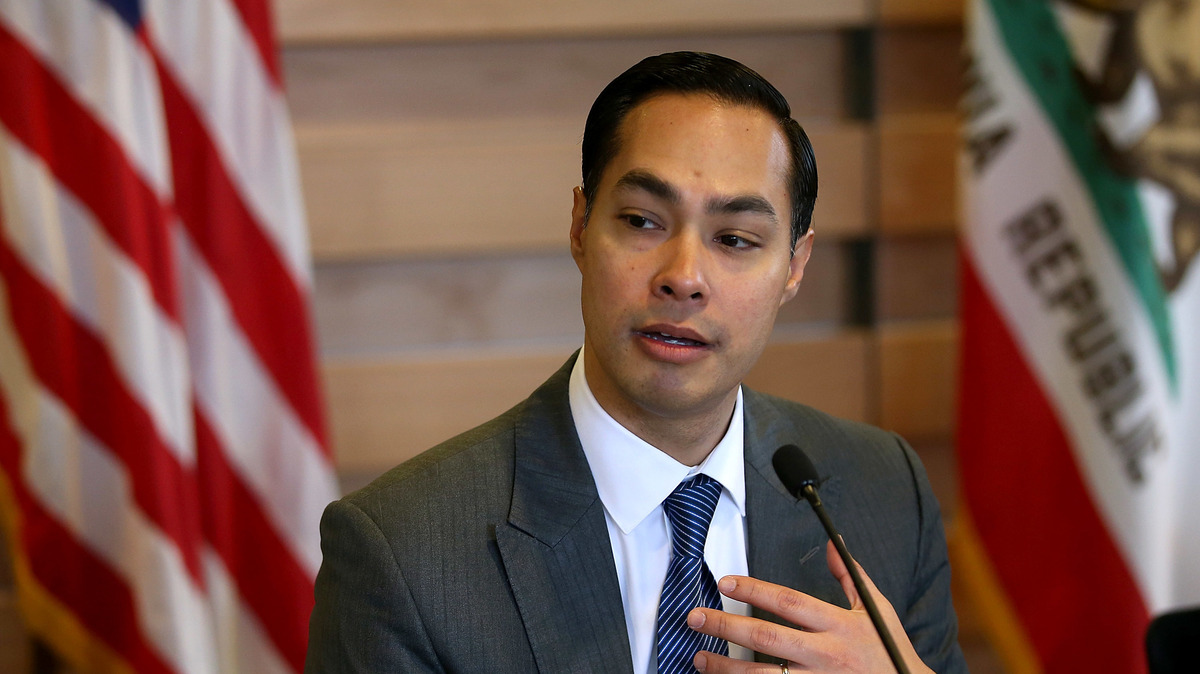 The current secretary of housing and urban development, Castro is a rising star in the Democratic Party. In 2009, when he was just 35, he was elected the mayor of San Antonio — the youngest mayor of a major U.S. city. He delivered the keynote address at the 2012 Democratic National Convention in Charlotte, N.C. He would be the first Hispanic on a presidential ticket and would provide a contrast to Trump's controversial remarks about Latinos. But recent reports say he has slipped on Clinton's list owing to concerns he lacks the experience to step into the presidency if necessary. 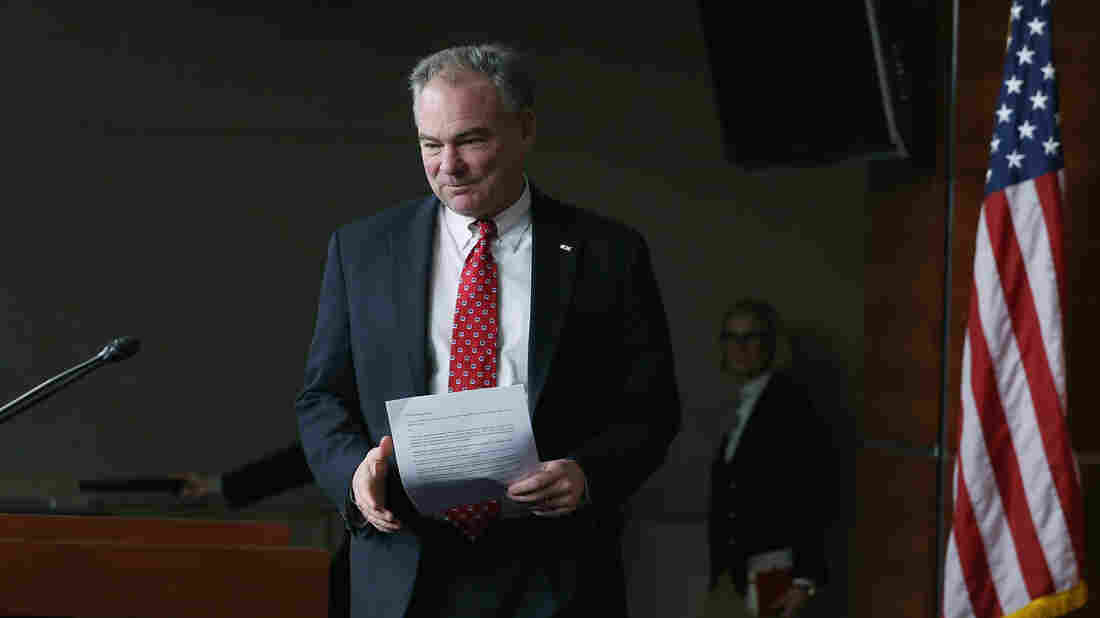 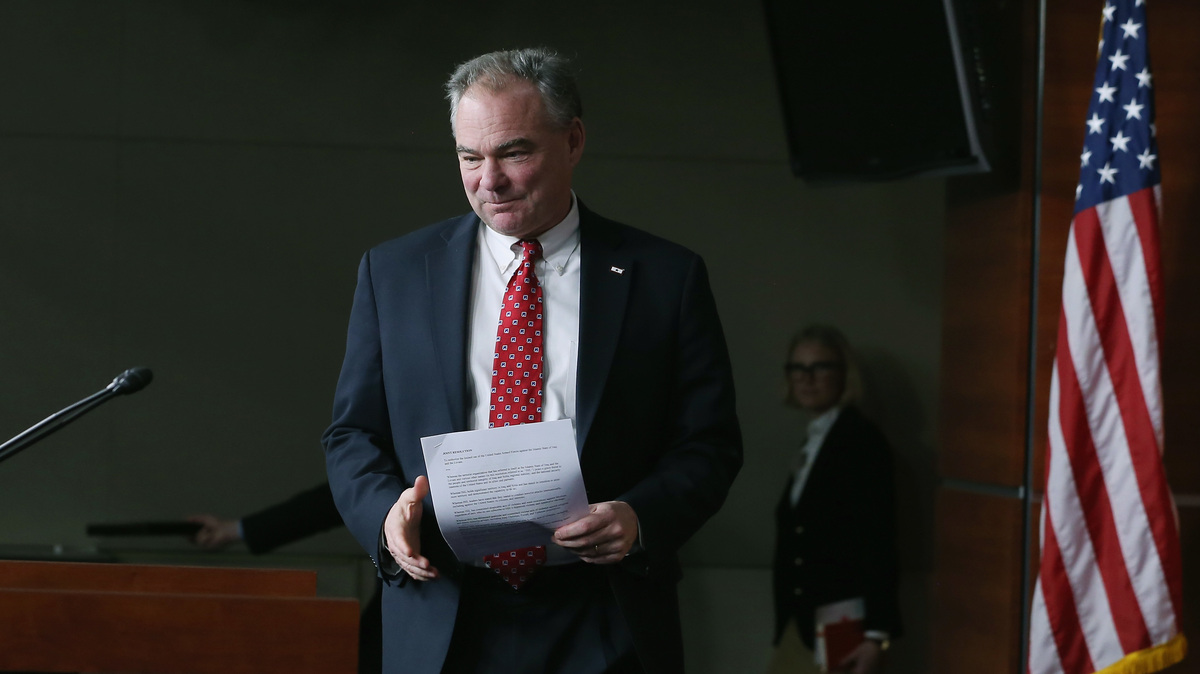 Sen. Tim Kaine walks up to speak at a news conference in 2015.

With A Speech In Spanish, Tim Kaine Makes Senate History

Kaine would be a more traditional choice for vice president, but that may be exactly what Clinton needs. Last month, he even admitted he lacks the pizazz of some other candidates, telling Meet the Press moderator Chuck Todd, "I am boring." He's an effective surrogate, comes from a swing state and has good relationships on both sides of the aisle. He has arguably the most political experience of her possible running mates, including service as mayor of Richmond, governor of Virginia and chairman of the Democratic National Committee. He is fluent in Spanish and was an early Clinton endorser. 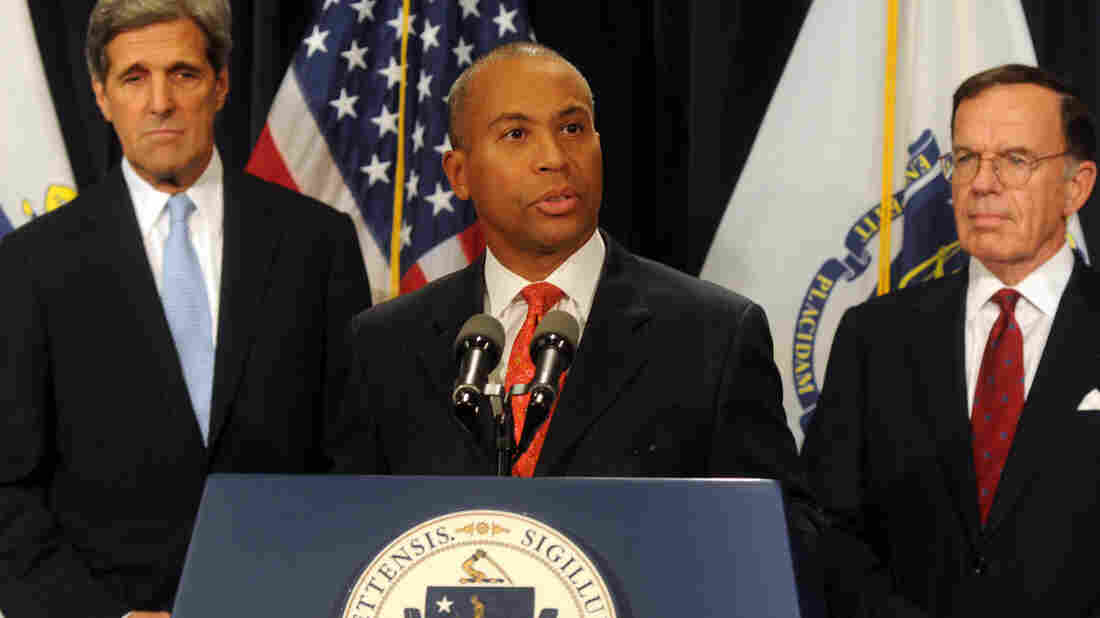 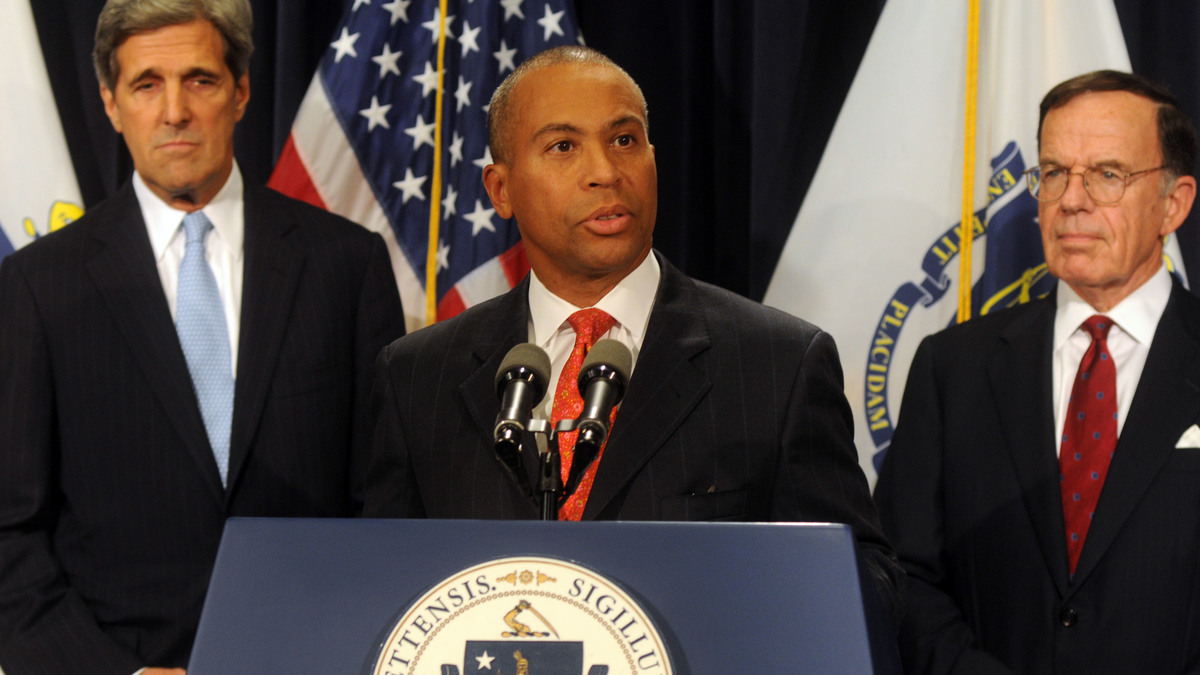 A former two-term governor of Massachusetts, Patrick would add diversity to the Clinton ticket. In 1994, President Bill Clinton appointed Patrick as an assistant attorney general, putting him in charge of the civil rights division of the Department of Justice. Later, he went into private practice as general counsel of Texaco and Coca-Cola. He endorsed President Obama in 2008; Obama's chief strategist, David Axelrod, consulted on Patrick's 2006 gubernatorial race and later helped in his tough 2010 re-election. While Massachusetts isn't a swing state, Patrick's business and executive experience could be useful as a counterpoint to Trump. 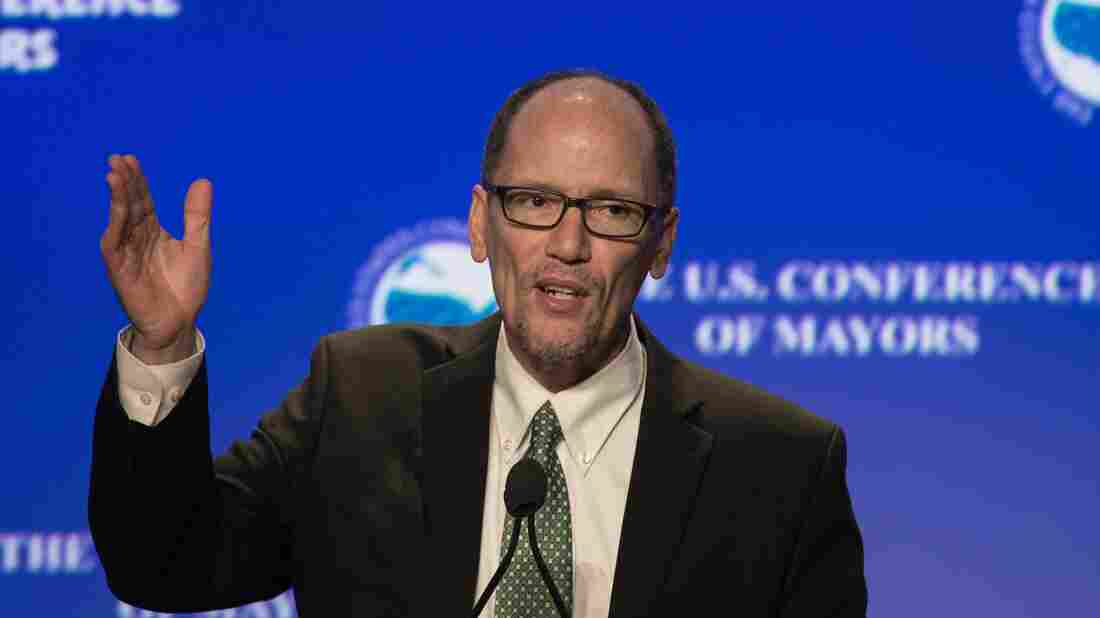 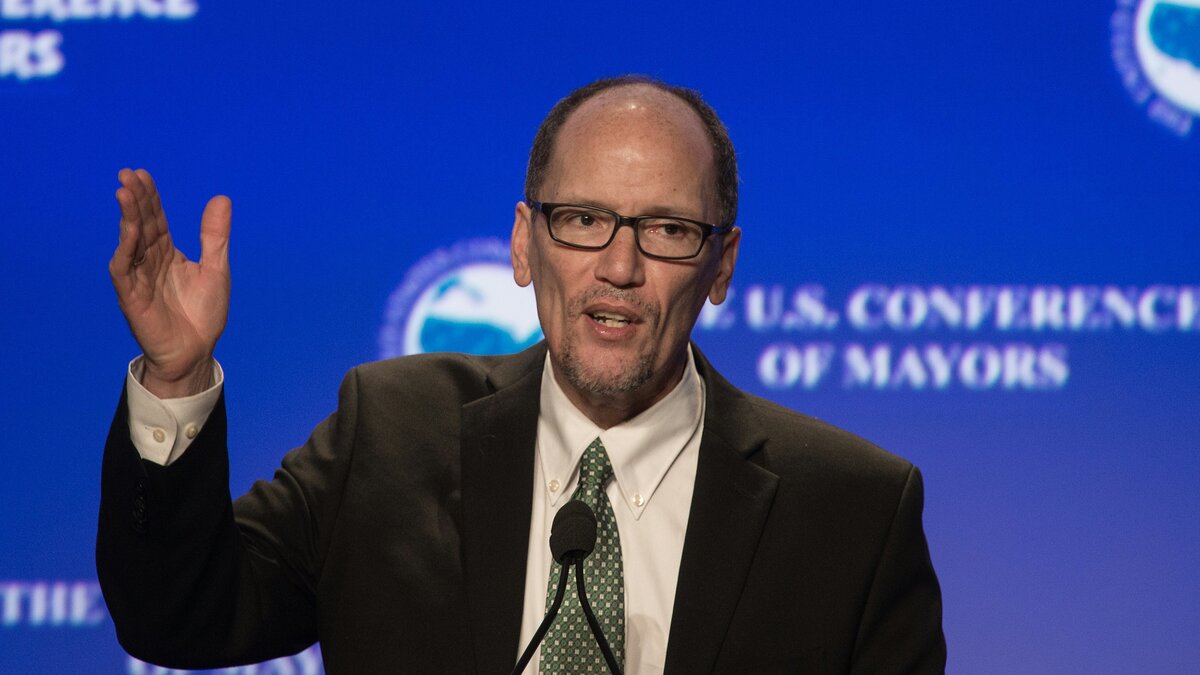 Perez has long been mentioned as a possible running mate for Clinton. The current secretary of labor was first appointed by Obama as an assistant attorney general for the Justice Department's Civil Rights Division. The son of Dominican immigrants, he would help excite the Hispanic electorate. He is also beloved by labor unions — so much so that they campaigned against his nomination to replace Eric Holder as attorney general in 2014 because they wanted Perez to stay at the Labor Department. He is less well known than some of Clinton's other possible picks, though, but has been unafraid to attack Trump. 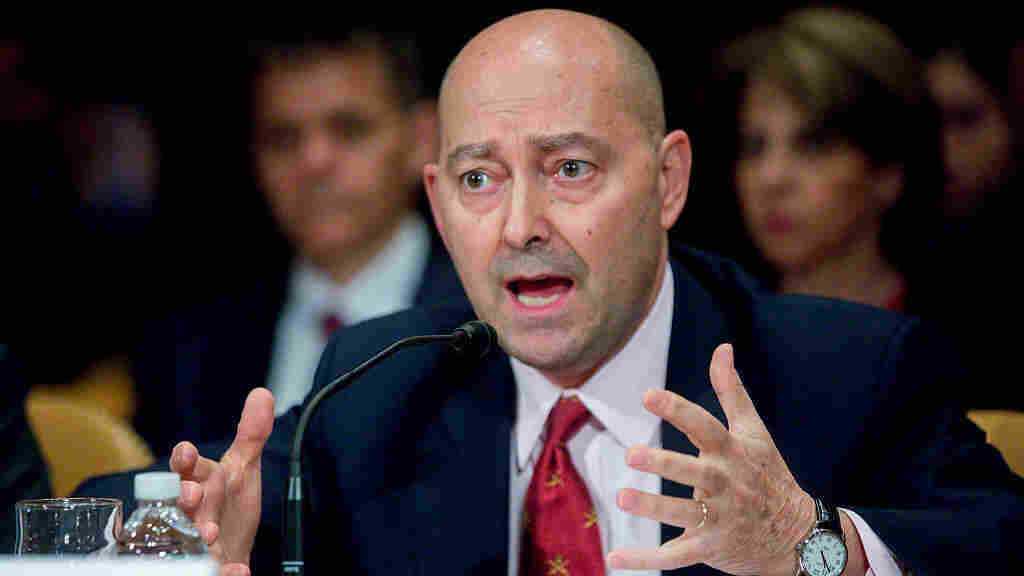 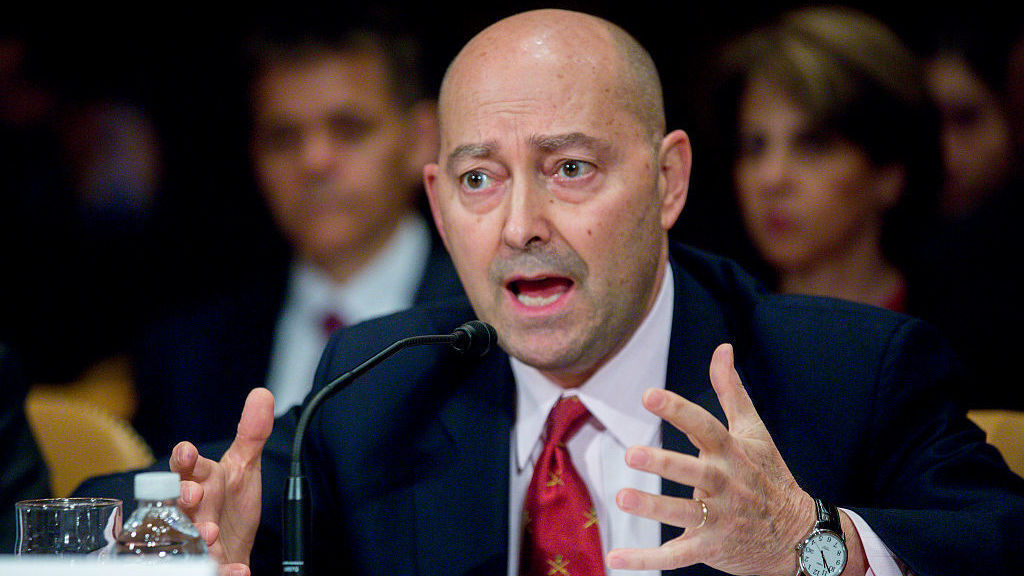 A newly-floated name Clinton is reportedly vetting, Stavridis would lend considerable military experience and national security credibility to a Clinton ticket. He spent over thirty years in the Navy and rose to the rank of a 4-star Admiral. For four years, he served as the 16th Supreme Allied Commander at NATO, where he oversaw operations in Afghanistan, Libya, Syria, the Balkans, and piracy off the coast of Africa. He is currently the Dean of The Fletcher School of Law and Diplomacy at Tufts University. He has criticized Donald Trump, calling his foreign policy "naive and dangerous." 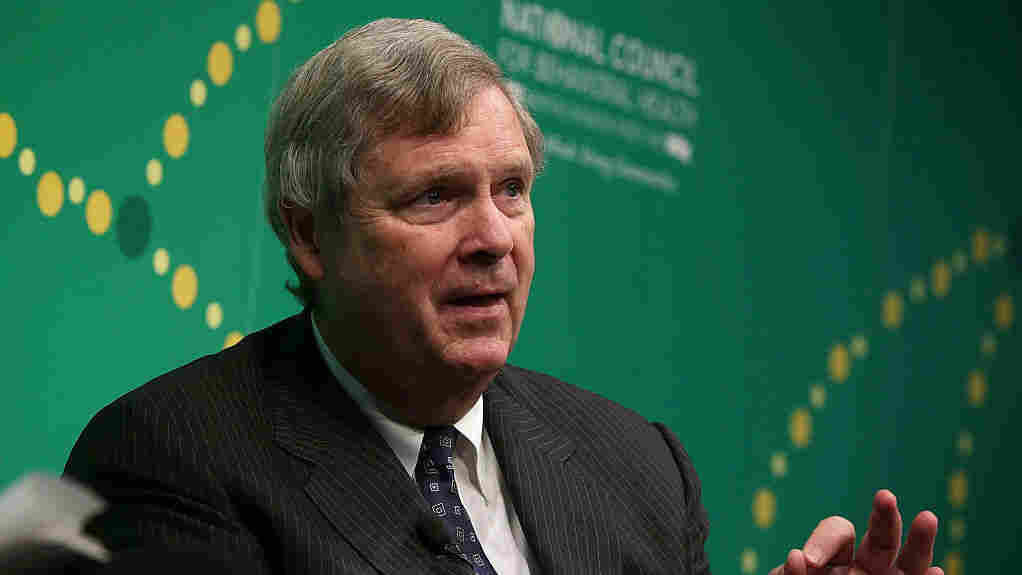 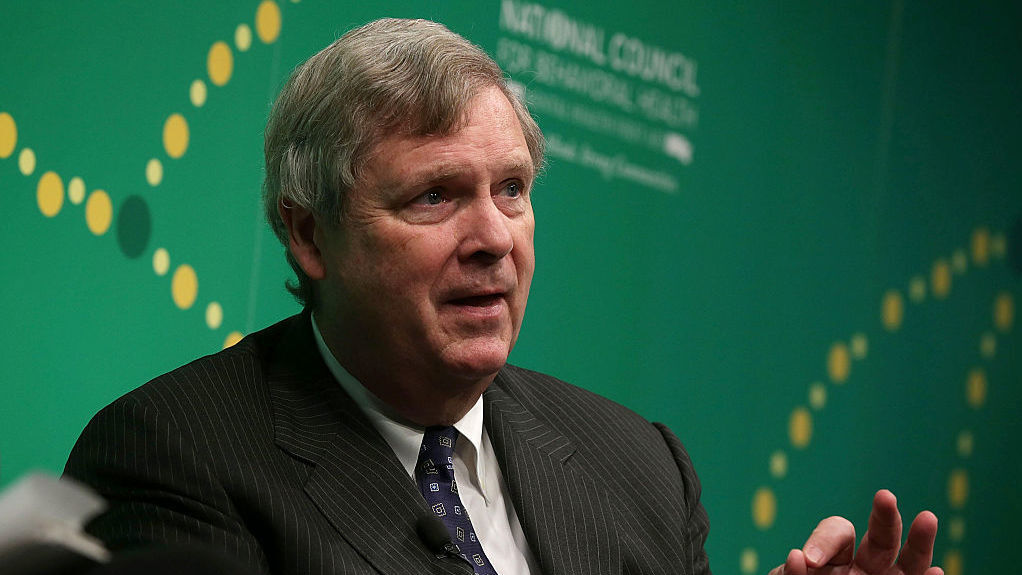 U.S. Agriculture Secretary Tom Vilsack participates in a discussion on "The Opioid Epidemic" in April 2016.

Vilsack has served at almost every level of government, beginning as mayor of Mt. Pleasant, Iowa in 1987. He went on to serve as a state senator and the two-term the governor of Iowa. He's the current Secretary of Agriculture and is the only remaining member of President Obama's original cabinet. Like Kaine, he's a safe pick for Clinton and was already vetted for the vice presidency by John Kerry in 2004. He briefly ran for president in the 2008 cycle but dropped out in early 2007. He endorsed Clinton and served as her national co-chair. 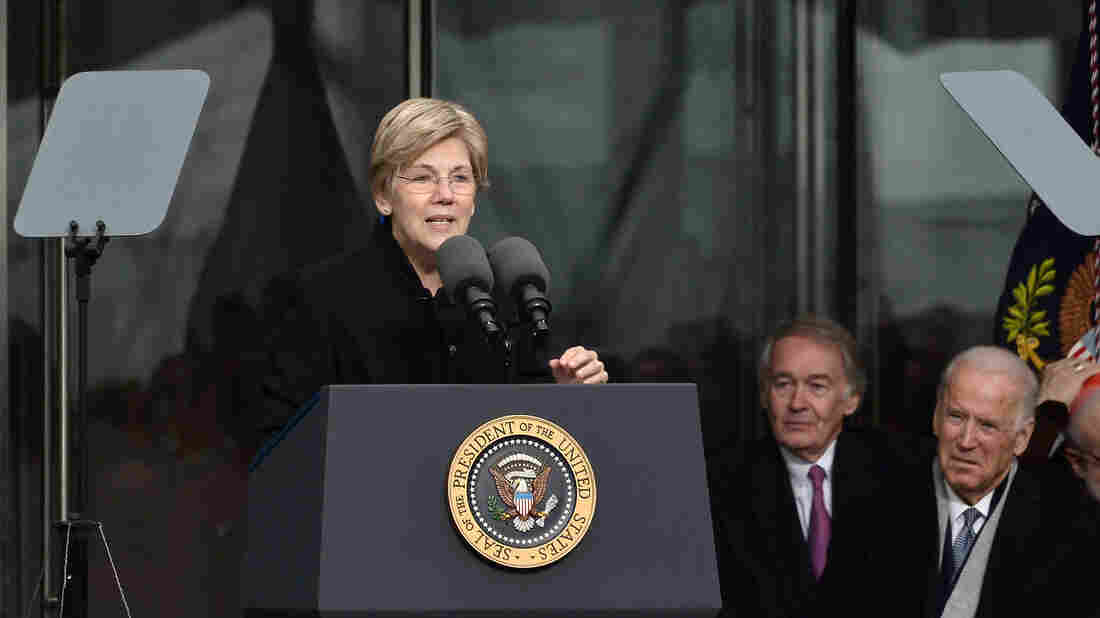 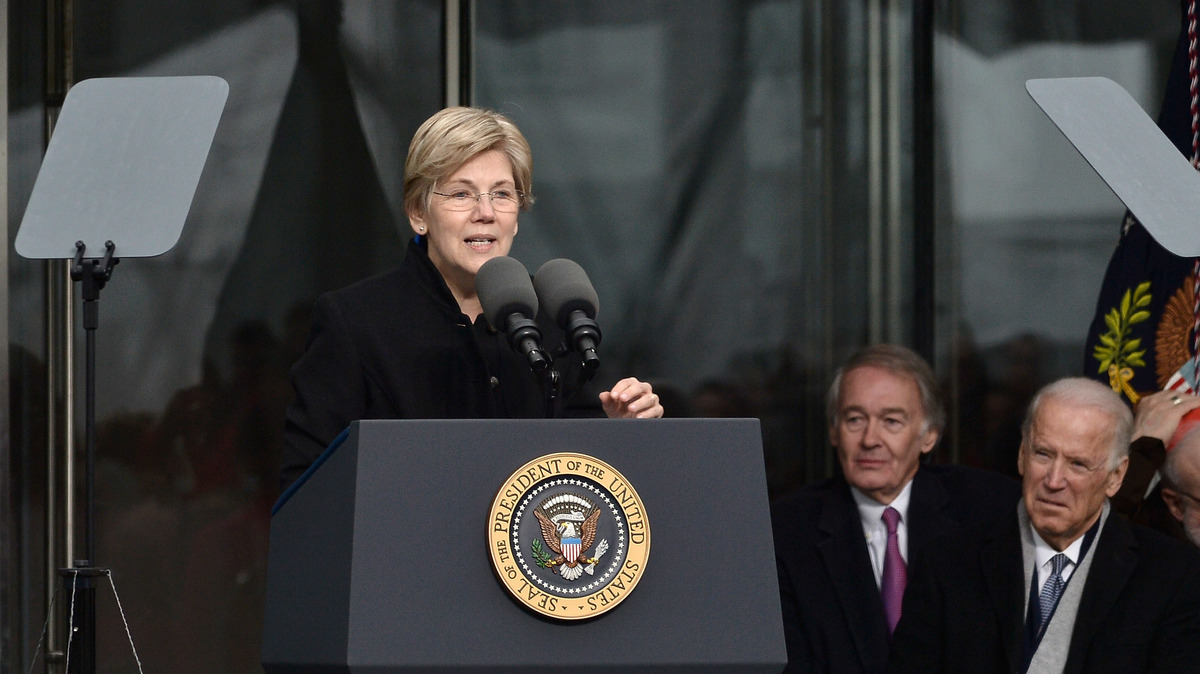 Sen. Elizabeth Warren speaks at the dedication ceremony for the Edward M. Kennedy Institute for the United States Senate in 2015.

When Warren campaigned with Clinton last month, it was many Democrats' dream ticket. She has been a ferocious Trump attack dog, firing back as the presumptive GOP nominee derided her with nicknames such as "Pocahontas." Even before she was elected, she became a hero for progressives after creating the Consumer Financial Protection Bureau and speaking out against Wall Street influence. Many liberal groups urged her to run for president herself this year, but she rebuffed their advances. Now, Warren on the ticket could be an olive branch to Sanders supporters. Others think that an all-woman ticket would alienate some male voters.

A previous version of this article incorrectly said Xavier Becerra ran for Los Angeles mayor in 2011; in fact, he ran in 2001. Also, the article has been updated to reflect Becerra's current position on NAFTA: He's against it.