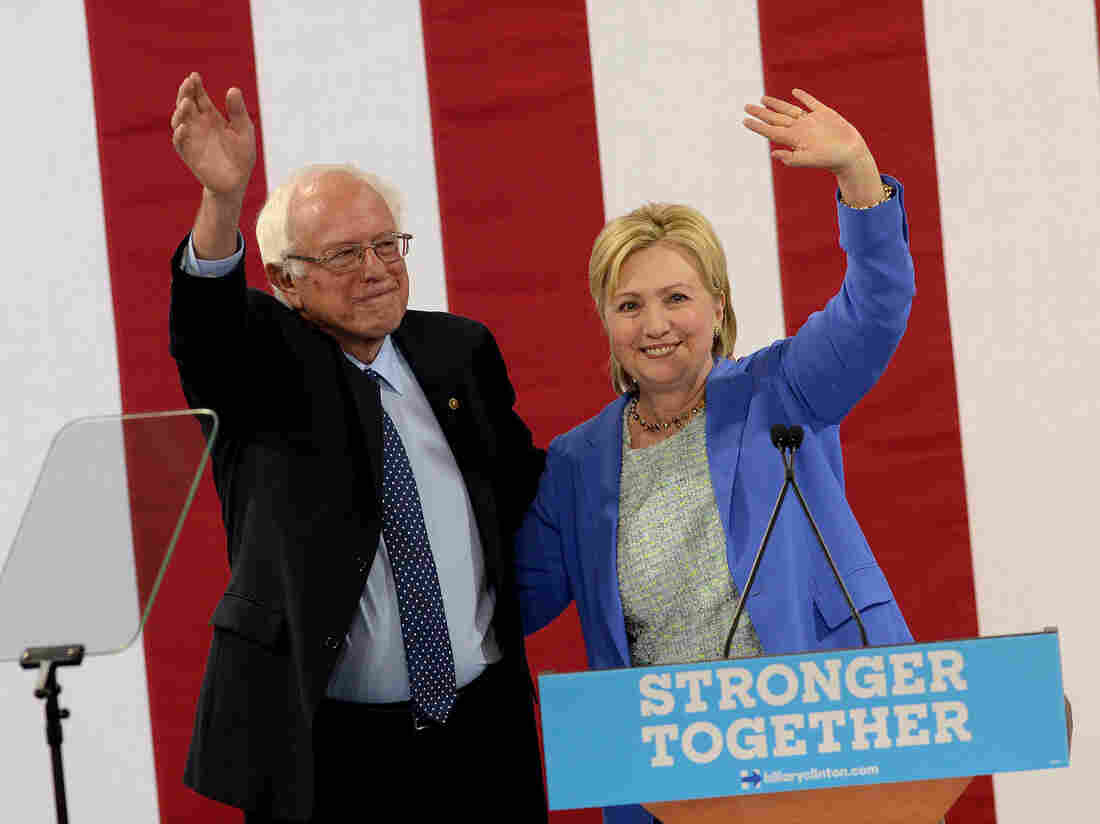 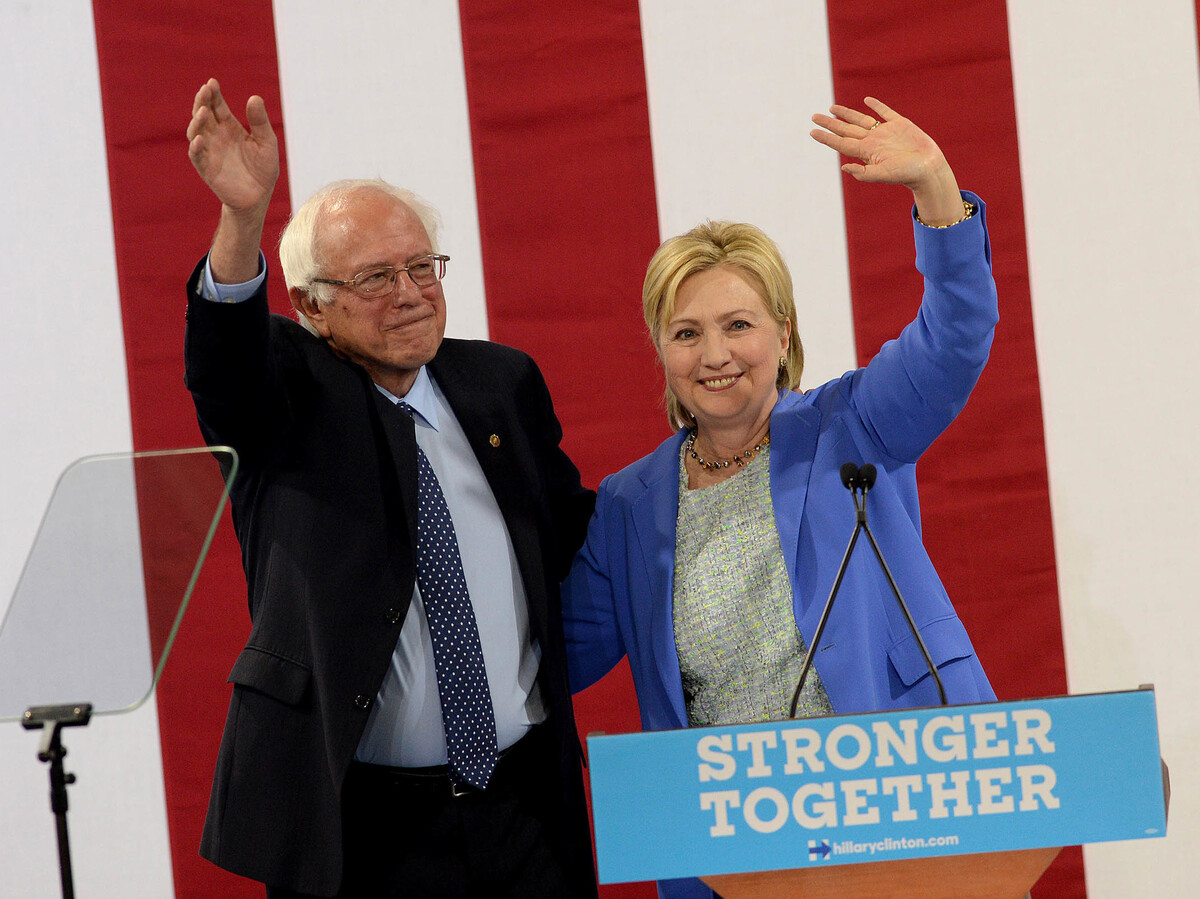 The lingering chasm between presumptive Democratic presidential nominee Hillary Clinton and her chief primary rival was bridged Tuesday, with Sen. Bernie Sanders teaming up with Clinton at a campaign event, where he formally endorsed Clinton's bid for the White House.

"I have come here today not to talk about the past but to focus on the future. That future will be shaped more by what happens on Nov. 8 in voting booths across our nation than by any other event in the world. I have come here to make it as clear as possible as to why I am endorsing Hillary Clinton and why she must become our next president."

A few of the signs at the Bernie/Hillary rally. Feels a bit like a wedding where the family is unsure. pic.twitter.com/WvCmKzeSnM

The Sanders endorsement ends a lengthy — and awkward — period in which many were wondering if and how he would back Clinton. Five weeks ago, Clinton, the Democratic Party's presumptive nominee, became the first woman in American history to secure enough delegates to clinch the nomination to head the ticket of a major party.

After thanking his supporters for helping him win contests in 22 states and nearly 1900 delegates during the primary – a feat Sanders said was "far more than almost anyone thought we could win" – he quickly shifted his focus on Donald Trump, the presumptive Republican nominee.

"Secretary Clinton has won the democratic nominating process," says Sanders. Now a group of his vocal supporters are walking out.

As someone shouts during Clinton speech, Sanders looks at the person and gestures with his hand as if to say not now.

Sanders And Clinton To Campaign Together In Portsmouth, N.H.

Sanders And Clinton To Campaign Together In Portsmouth, N.H.

How Hillary Clinton Locked Up The Democratic Nomination In 10 Steps

Bernie Sanders, Party Crasher: Notes On The (Looming) End Of A Campaign

Sanders, whose remarks lasted nearly half an hour, praised Clinton as a champion who will fight to fix the economy, help make public college and university tuition more affordable for working class families, someone who will work towards energy solutions to stave off climate change. Sanders also said Clinton will work towards raising the federal minimum wage higher than $7.25 – which he called a "starvation wage."

"But her opponent – Donald Trump – well, he has a very different view. He believes that states should have the right to lower the minimum wage or even abolish the concept of the minimum wage altogether," Sanders said.

The Trump campaign was busy during the announcement sending a flurry of emails, including one titled "Bernie Is Now Official Part Of A Rigged System." Just before the start of the event Trump tweeted:

"Bernie Sanders, who has lost most of his leverage, has totally sold out to Crooked Hillary Clinton. He will endorse her today - fans angry!"

There was also a tweet of a video montage of Sanders' past statements criticizing Clinton.

When Clinton addressed the Portsmouth, N.H. crowd, she thanked those who supported the Sanders campaign. She highlighted his campaign which "energized and inspired a generation of young people" and helped bring "people off the sidelines and into the political process." She underscored Sanders' earlier remarks saying that this election is bigger than single candidate or one campaign.

"Now with your help, we are joining forces to defeat Donald Trump, win in November and yes, together, build a better future we can all believe in," Clinton said.

At one point, as a nod to a popular refrain by Sanders on the campaign Clinton trail, Clinton told the crowd:

Clinton also took time highlight her push for developing national guidelines on the use of force for law enforcement agencies across the nation as well as more rigorous training on implicit bias. While she did not mention explicitly the memorial service for the police officers killed in Dallas being held just a few hours after her event ended, she did praise their valor of the officers to "ran into the gunfire."

"That's the kind of courage and dedication our police and first responders show every single day," Clinton said.

Before the event kicked off, NPR's Tamara Keith noted feuding chants of "Hillary" and "Bernie" coming from the crowd. There was also a younger Sanders supporter shouting "Never Hillary," as well as mentions of the FBI investigation into Clinton's email server, while sitting next to older women supporting Clinton, who appeared to be getting increasingly tense.

But Democrats now get a chance to turn the page on a contentious primary campaign and promote a party that is unified, just days before the Republicans are set to kick off their own convention in Cleveland next week.

New Hampshire is a state Sanders won handily during the primary — by more than 20 points — and catapulted his bid for the nomination into a robust campaign that challenged Clinton longer than most had predicted.

The win helped Sanders raise massive amounts of money, more than the Clinton juggernaut — $225 million to Clinton's $210 million through the end of May. Sanders also outspent Clinton by $23 million ($216 million to $193 million).

Sanders rode a wave of massive rallies that filled college arenas, where he championed issues, like beating back Wall Street's influence and overcoming income equality, which energize the liberal wing of the Democratic base, especially young voters and white liberals.

As NPR's Tamara Keith reported Monday, Democrats gathered in Orlando, Fla., this past weekend to hash out planks of the party's platform. It now includes pushing for tuition-free state college, a $15 minimum wage, limits on fracking and other items Sanders campaigned on.

Since becoming the presumptive nominee, Clinton has campaigned alongside President Obama and Massachusetts Sen. Elizabeth Warren, both of whom are wildly popular among Democrats. She has also warned a Trump presidency would push the country in the wrong direction.

In 2008, it took Clinton only four days to come out in support of Obama after their long primary battle. Sanders, by contrast, has held out about a month from the end of the primary season. Both Clinton and Sanders huddled in Washington last month, and NPR's Tamara Keith has reported that both camps have maintained continual contact since that meeting.

Clinton's appearance alongside Sanders could do a lot to assuage his supporters who may remain on the fence about supporting her candidacy, especially among young voters. Democrats head to their party convention in Philadelphia, where Clinton will be formally nominated later this month.'