Accessibility links
LISTEN: Funeral After Funeral, Obama Calls For Healing And Action On Guns President Obama attended a memorial on Tuesday to honor the five law enforcement officers killed in the Dallas shooting. It's one in a long line of funerals he's had to attend.

1:14
LISTEN: Funeral After Funeral, Obama Calls For Healing And Action On Guns 1:14 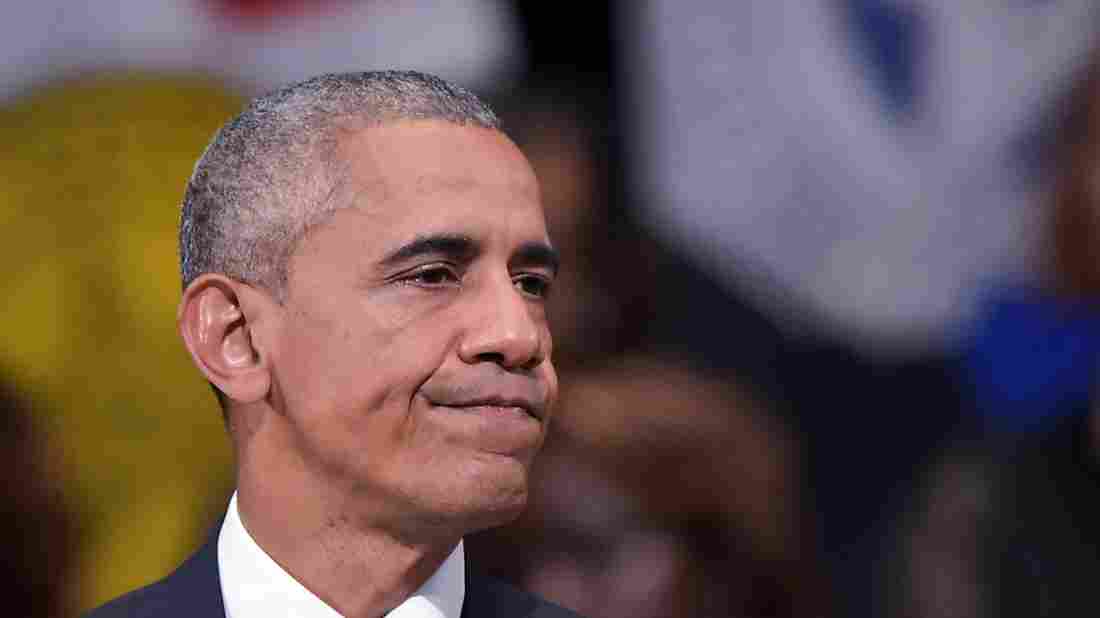 President Obama pauses as he speaks during an interfaith memorial service for the victims of the Dallas police shooting at the Morton H. Meyerson Symphony Center on Tuesday. Mandel Ngan/AFP/Getty Images hide caption 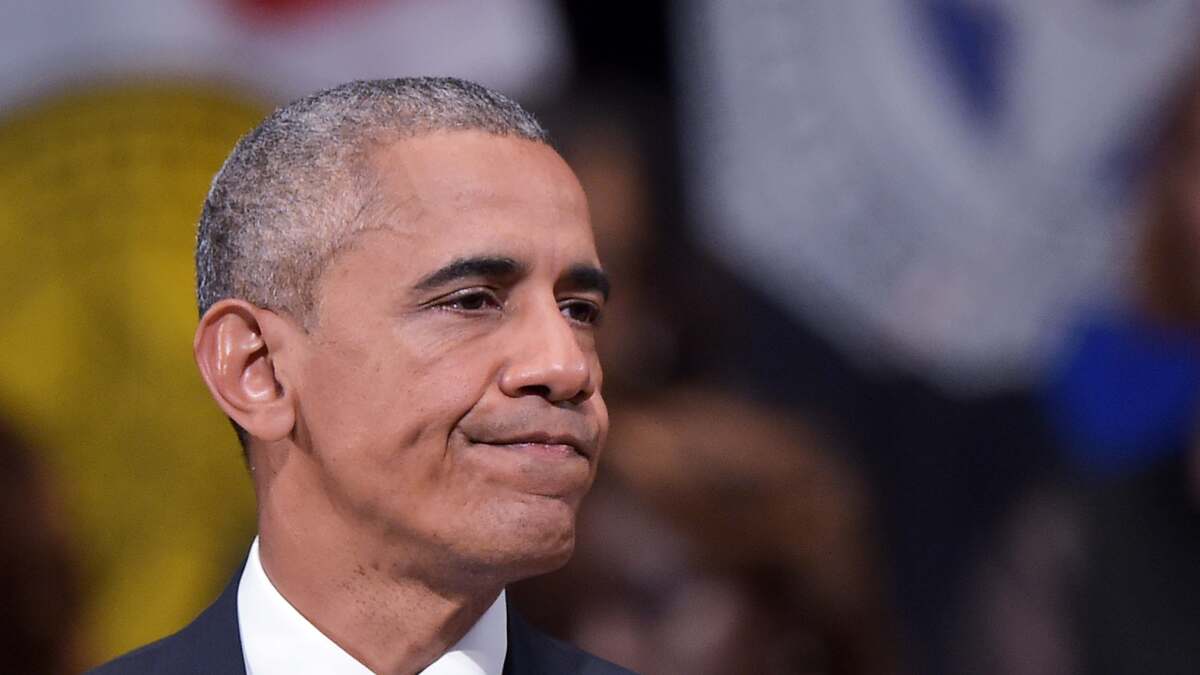 President Obama pauses as he speaks during an interfaith memorial service for the victims of the Dallas police shooting at the Morton H. Meyerson Symphony Center on Tuesday.

"Faced with this violence we wonder if the divides of race in America can ever been bridged," Obama said.

"Dallas, I'm here to say we must reject such despair. I'm here to insist we're not as divided as we seem. I know how far we've come against impossible odds," he added.

It is one of several memorials or vigils Obama has attended following an instance of gun violence. Throughout his tenure, Obama has traveled across the country to pay his respects and call for action on overhauling gun laws. Listen to his remarks from some of those memorials below. 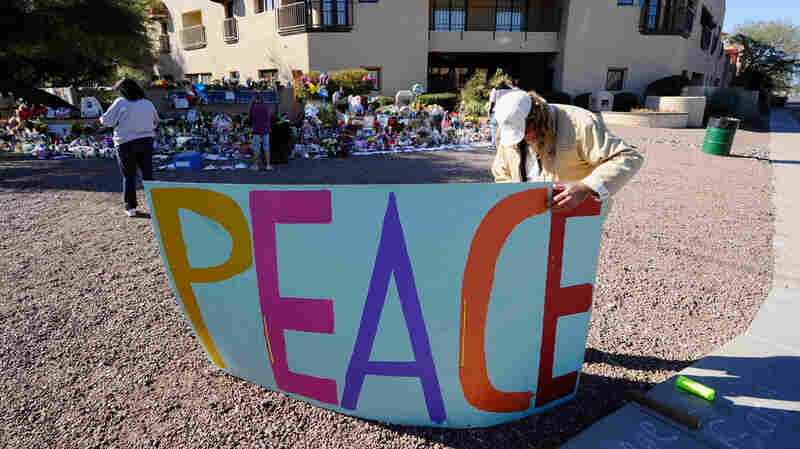 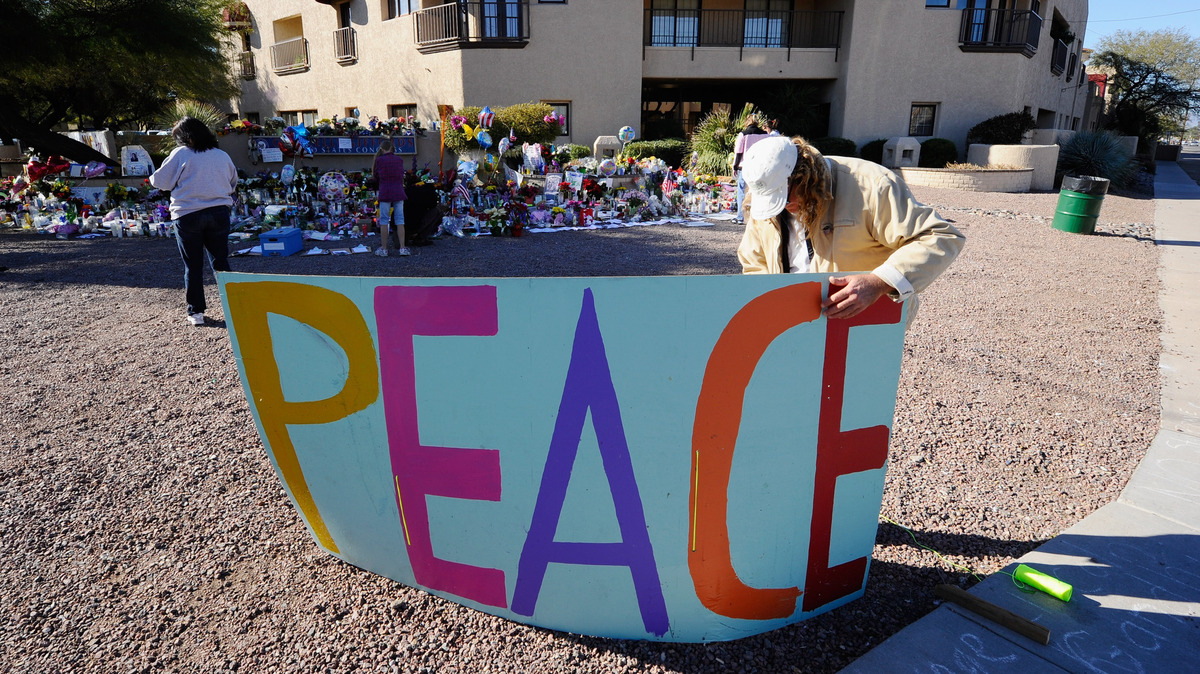 A shooting rampage in January 2011 left six people dead and 12 injured in Tucson, Ariz. One of those victims was Rep. Gabrielle Giffords. After recovering from a gunshot to the head, Giffords has become a strong supporter of tighter background checks for gun buyers and bans on some weapons that carry high-capacity cartridges. "Too many children are dying. Too many children. We must do something!" Giffords told the Senate Judiciary Committee in 2013.

While attending the memorial service for the victims of the Tuscon shooting, Obama urged all Americans to debate the events in a way that "heals" rather than "wounds" the nation.

"But at a time when our discourse has become so sharply polarized — at a time when we are far too eager to lay the blame for all that ails the world at the feet of those who happen to think differently than we do — it's important for us to pause for a moment and make sure that we're talking with each other in a way that heals, not in a way that wounds." 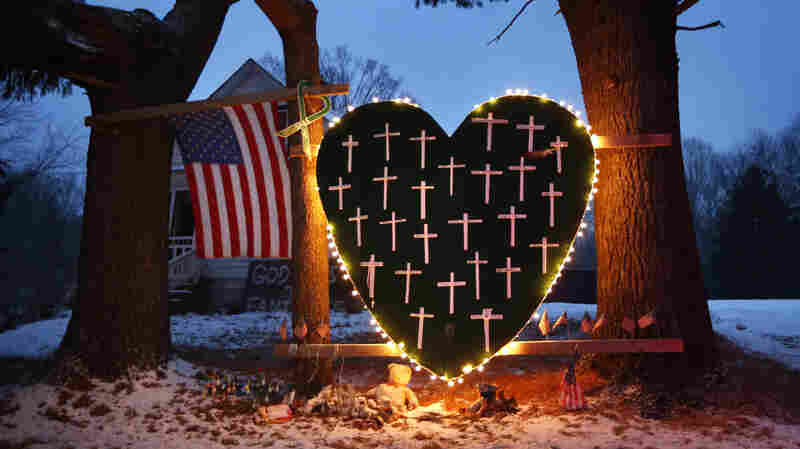 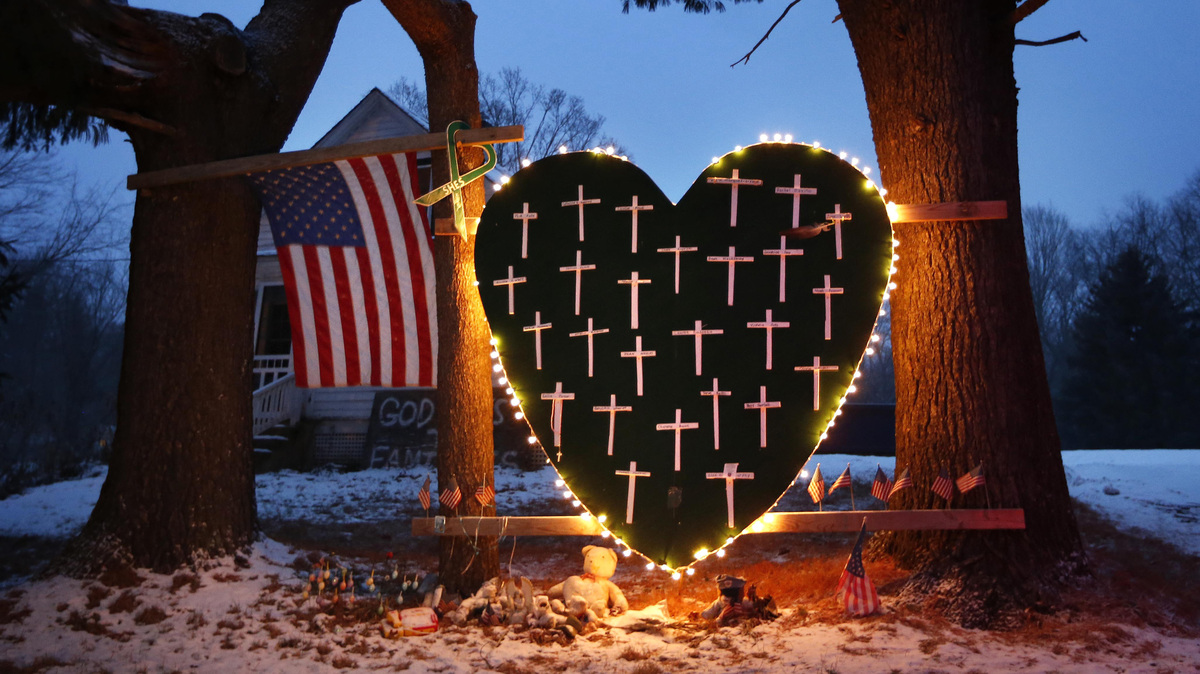 One year after the Tucson shooting, one of the deadliest school mass shootings in recent history occurred at Sandy Hook Elementary School in Newtown, Conn. The attack left 20 children and six adults dead. Obama attended the vigil in the town's high school. He asked, "Can we honestly say that we're doing enough to keep our children — all of them — safe from harm?" Answering, "I've been reflecting on this the last few days, and if we're honest with ourselves, the answer is no. We're not doing enough. And we will have to change."

"We can't tolerate this anymore. These tragedies must end them, we must change. We will be told that the causes of such violence are complex, and that is true. No single law — no set of laws can eliminate evil from the world, or prevent every senseless act of violence in our society.

"But that can't be an excuse for inaction. Surely, we can do better than this. If there is even one step we can take to save another child, or another parent, or another town, from the grief that has visited Tucson, and Aurora, and Oak Creek, and Newtown, and communities from Columbine to Blacksburg before that — then surely we have an obligation to try." 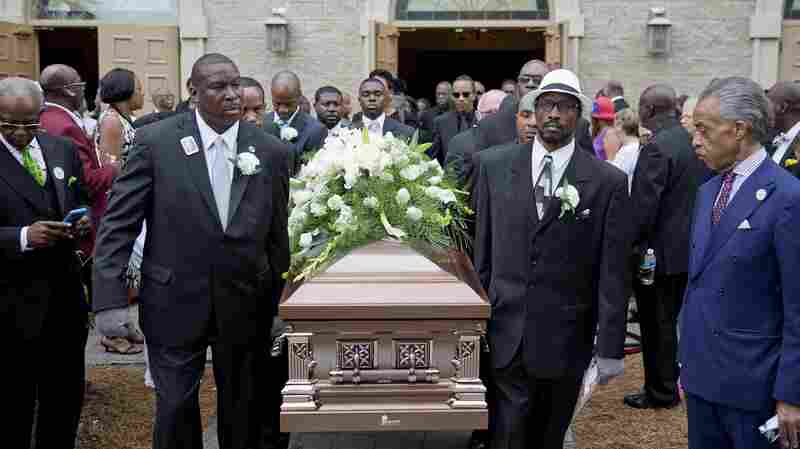 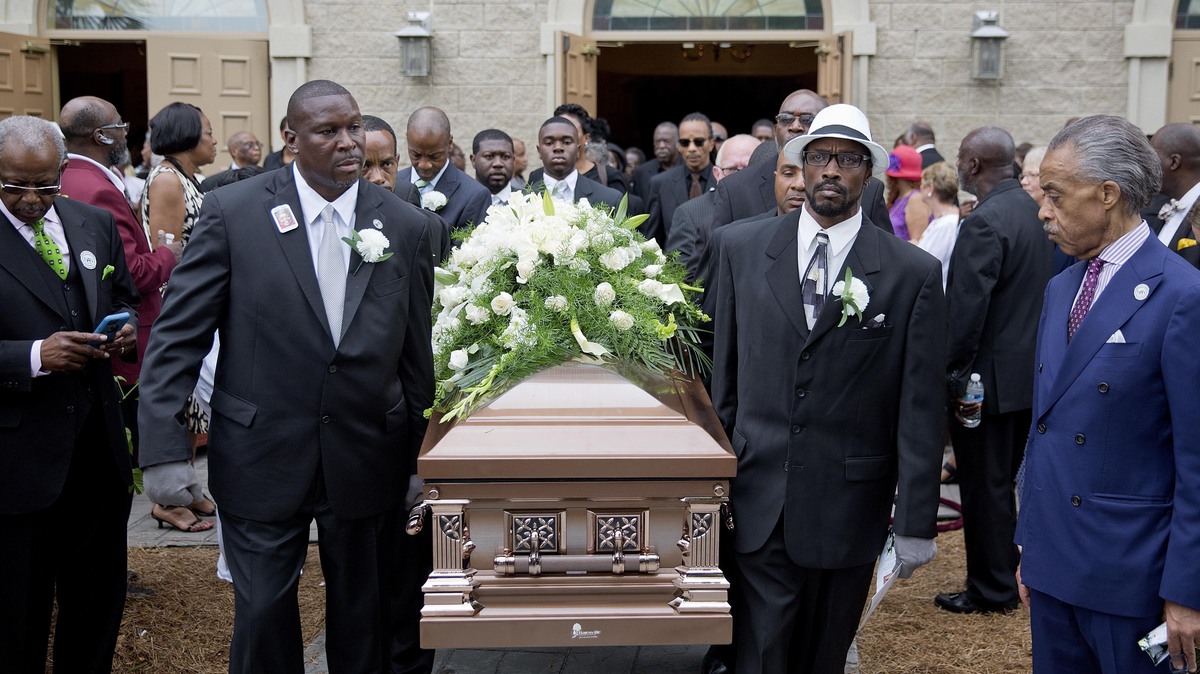 Last year, nine people were killed in a shooting at the Emanuel African Methodist Episcopal Church in Charleston, S.C. The shooter sat and prayed with the congregation for an hour before opening fire. During the eulogy for the Rev. Clementa Pinckney, one of Obama's most memorable moments was his singing of "Amazing Grace." He also asked the country to make a "moral choice to change." And his calls for legislative action on gun control seemed to grow more impatient.

"For too long, we've been blind to the unique mayhem that gun violence inflicts upon this nation. Sporadically, our eyes are open: When eight of our brothers and sisters are cut down in a church basement, 12 in a movie theater, 26 in an elementary school. But I hope we also see the 30 precious lives cut short by gun violence in this country every single day; the countless more whose lives are forever changed — the survivors crippled, the children traumatized and fearful every day as they walk to school, the husband who will never feel his wife's warm touch, the entire communities whose grief overflows every time they have to watch what happened to them happen to some other place." 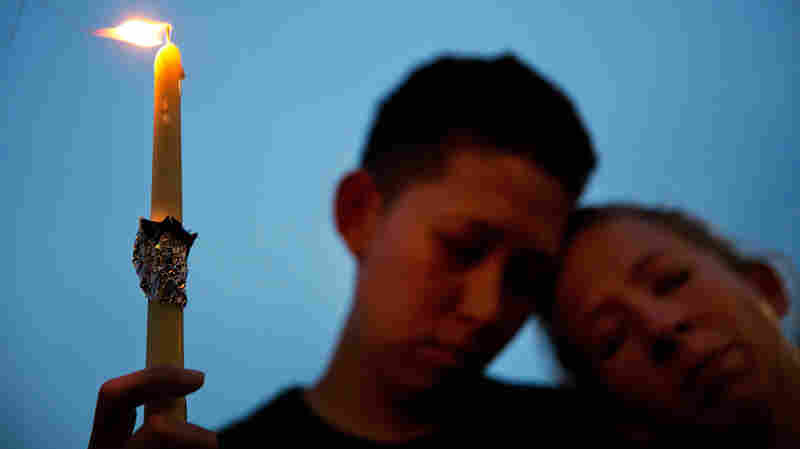 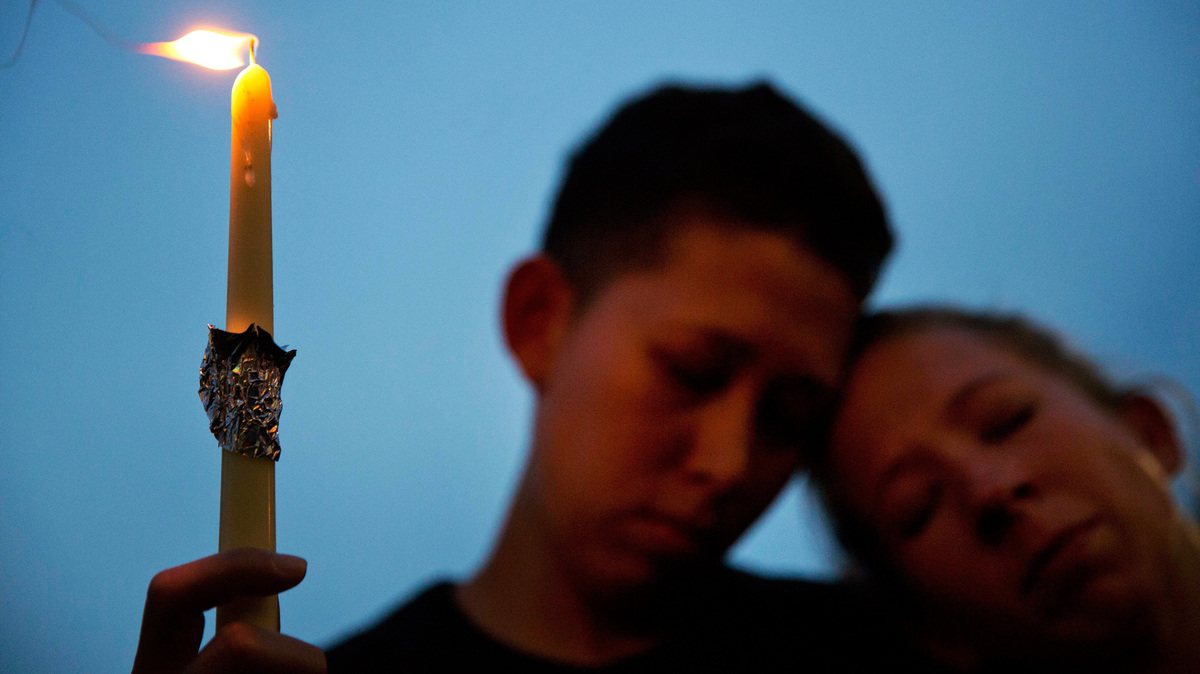 One year after the Charleston shooting, LGBT-friendly Pulse Nightclub was attacked by a single gunman who killed 49 people. The death toll made it the deadliest mass shootings in recent American history. Obama visited the families of the victims in a private gathering in Orlando, Fla. Following the closed gathering, Obama appeared before the press, calling for politicians to act swiftly and do the right thing to change the current gun laws.

"Today, once again, as been true too many times before, I held and hugged grieving family member and parents and they asked, 'Why does this keep happening?' And they pleaded that we do more to stop the carnage. They don't care about the politics. Neither do I. Neither does Joe. And neither should any parent out here. This debate needs to change, it's outgrown the old political stalemates. The notion that the answer to this tragedy would be to make sure that more people in a nightclub are similarly armed to the killer defies common sense. Those who defend the easy accessibility of assault weapons should meet these families and explain why that makes sense." 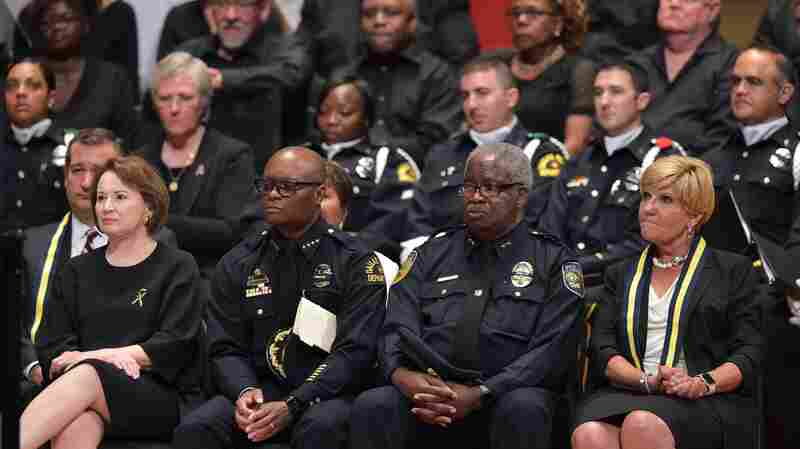 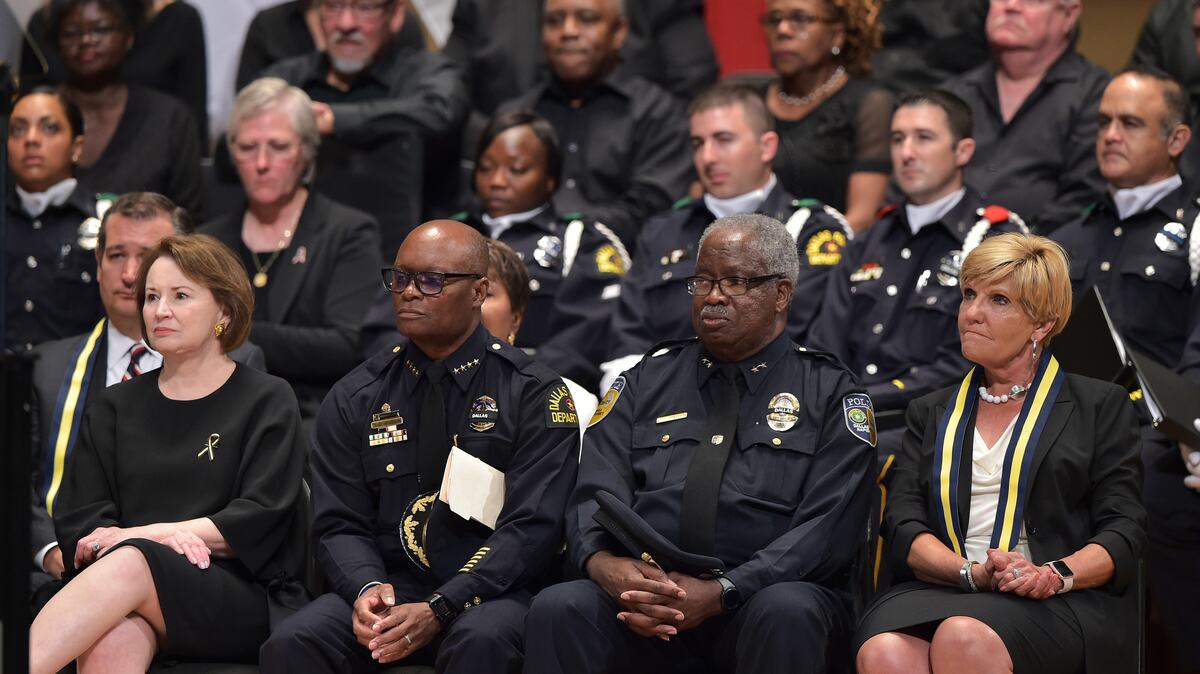 Less than a month after the Orlando attack, five law enforcement officers were killed, two other police officers and seven civilians were wounded in a sniper-style attack during a peaceful protest against the deaths of Alton Sterling and Philando Castile. On Tuesday, Obama attended an interfaith memorial that honored the slain officers.

"I see how easy we slip back into our old notions because they're comfortable, we're used to them. I've seen how inadequate words can be in bringing about lasting change. I've seen how — how inadequate my own words have been. And so I'm reminded of the passage in John's Gospel. 'Let us love not with words or speech, but with action and in truth.' If we're to sustain the unity, we need to get through these difficult times. If we are to honor these five outstanding officers who we lost, than we will need to act on the truths that we know. And that's not easy, it makes us uncomfortable. But we're gonna have to be honest with each other and ourselves."

A previous version of this story misspelled Philando Castile's last name as Castille.