Accessibility links
Truckers Take The Wheel In Effort To Halt Sex Trafficking A group called Truckers Against Trafficking is helping states enlist truckers to spot and report forced prostitution. The effort has sent traffickers to prison and liberated hundreds of sex slaves. 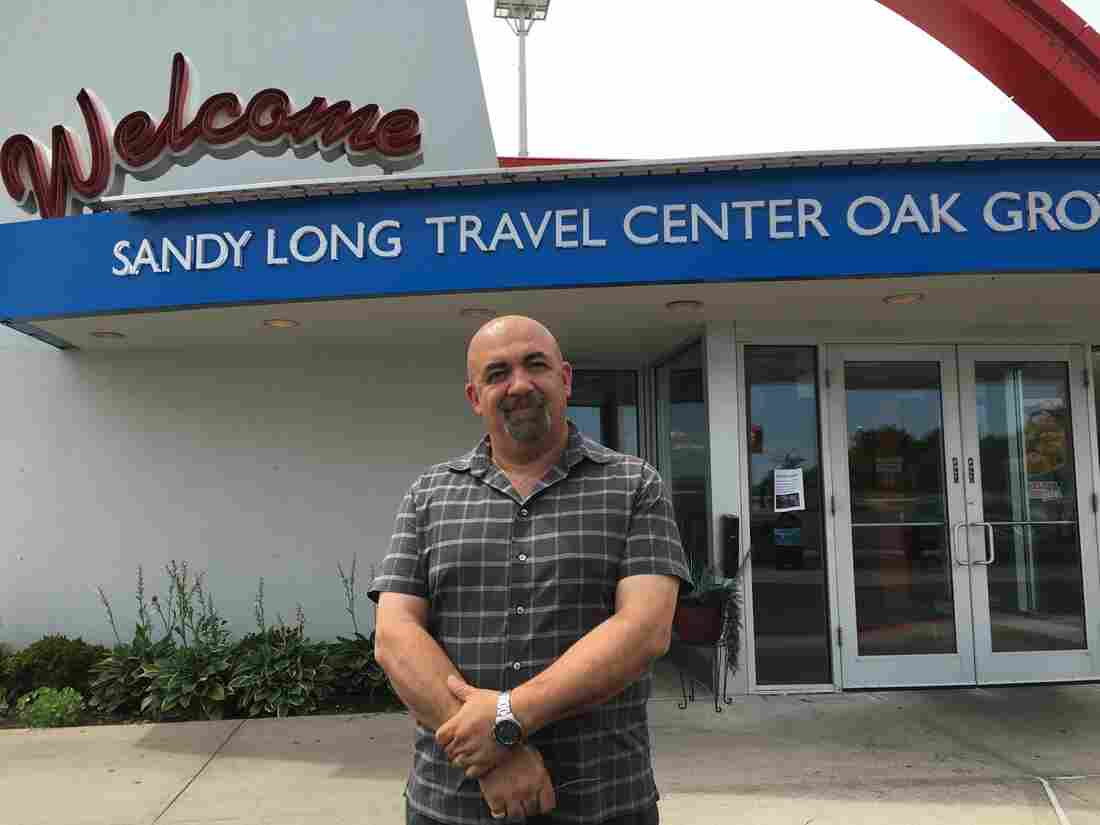 Sam Tahour, district manager for Travel Centers of America, stands next to a travel plaza in Oak Grove, Mo. Tahour was trained as part of a new effort to identify and stop sex trafficking at truck stops. Frank Morris/KCUR hide caption 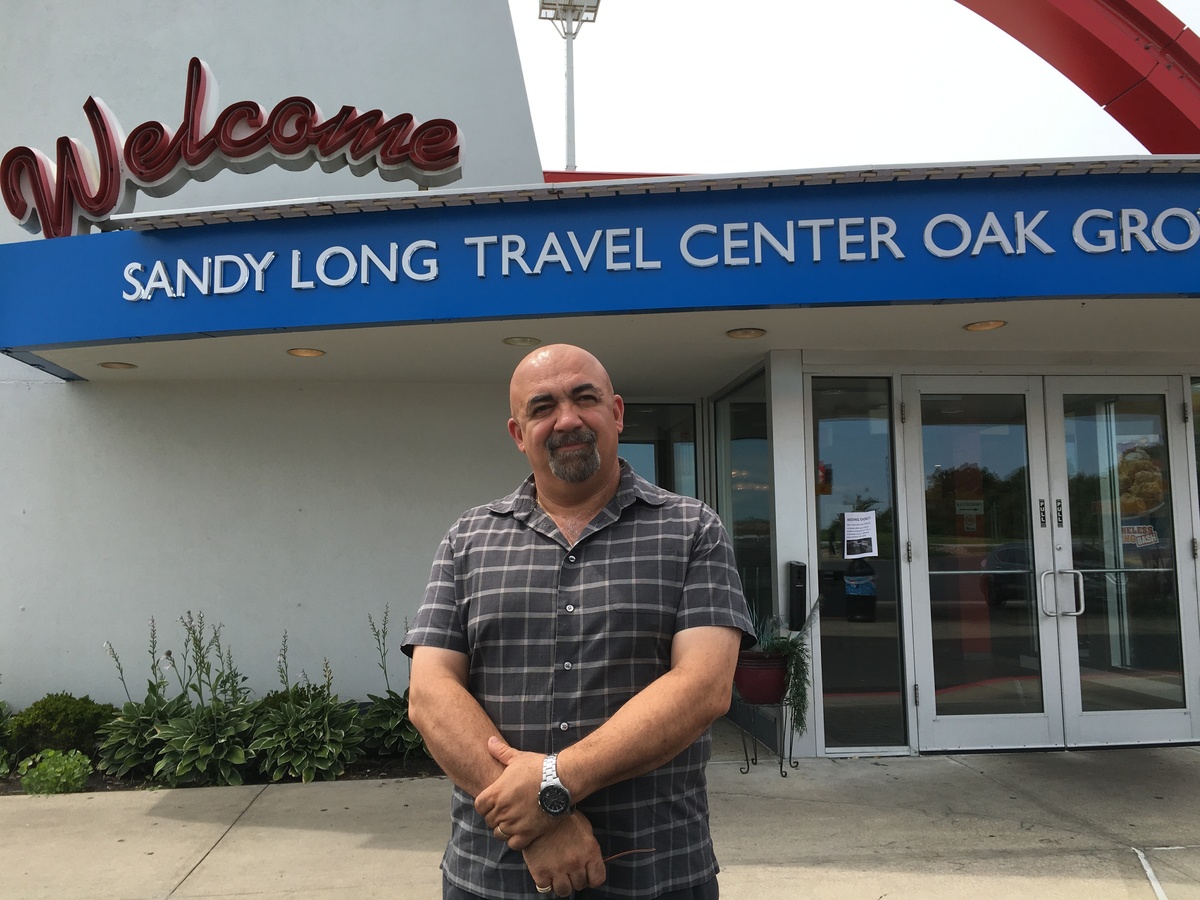 Sam Tahour, district manager for Travel Centers of America, stands next to a travel plaza in Oak Grove, Mo. Tahour was trained as part of a new effort to identify and stop sex trafficking at truck stops.

Editor's note: This report contains accounts of rape, violence and other disturbing events.

Sex trafficking wasn't a major concern in the early 1980s, when Beth Jacobs was a teenager. If you were a prostitute, the thinking went, it was your choice.

Jacobs thought that too, right up until she came to, on the lot of a dark truck stop one night. She says she had asked a friendly-seeming man for a ride home that afternoon.

Jacobs says he gave her something to drink in an old McDonald's cup, and drugged her. As she was waking up the man announced that he was a pimp. Her pimp.

She pleaded with the truck driver and cried all through the rape. The john got mad and demanded his money back.

"So, the pimp then beat me up right there in the street, right in the parking lot, and told me if I ever lost any more money for him again he'd kill me and my daddy," Jacobs says.

Despite the noise, no one at the truck stop intervened. And for the next six years, this violent pimp forced Jacobs to work as a sex slave.

The awareness of sex trafficking has changed a lot since then. Just last year, an old motor home parked at a truck stop caught the eye of trucker Kevin Kimmel.

"I saw a guy go in it, and I saw motion to the RV," Kimmel says. "And then I saw what I thought was a young girl peek out and be abruptly pulled back from the window, and the shade pulled back over it."

Kimmel called the police — and ended weeks of torture, starvation and forced prostitution for the victim.

Kylla Lanier says that Kimmel's actions "epitomizes the mission" of her group, Truckers Against Trafficking. She founded the group with her mother and three sisters a few years ago. It dawned on them that truckers would be great allies.

"Trafficking happens everywhere," Lanier says. "It's happening in homes, in conference centers, at schools, casinos, truck stops, hotels, motels, everywhere. You know, it's an everywhere problem, but truckers happen to be everywhere."

And these days TAT stickers, wallet cards and posters — showing a phone number for a sex trafficking hotline — are becoming ubiquitous in the trucking industry.

TAT teaches drivers to try to spot sullen, hopeless-looking children, teens and young adults. Perhaps they're wearing revealing clothing, or maybe have tattoos like bar codes or men's names that might indicate ownership. The group also promotes a hotline to report trafficking.

Jacobs managed to escape her life of forced prostitution after being jailed while working away from her home city. Now she counsels other survivors and works with TAT to help drivers understand the trafficking victim's point of view.

Trucking companies and law enforcement are enthusiastically on board, helping to reach nearly 250,000 drivers, whose calls to the hotline have freed hundreds of trafficking victims.

The approach is so effective that Kansas' attorney general wants to compel truck driving schools to teach sex trafficking prevention. In Ohio, says State Patrol Capt. Mike Crispen, it's already in the curriculum.

"It's just opportunity," Crispen says. "It's an opportunity to educate and get more eyes on the road for us."

Truck stops are fighting trafficking too.

Between the energy drinks upfront and the showers in back at a TA Travel Plaza in Oak Grove, Mo., about a half-hour from Kansas City, monitors play anti-trafficking videos 24/7. Stickers and wallet cards are on the counter, and anti-trafficking posters hang all over the store.

Employees are trained to spot trafficking, and District Manager Sam Tahour says the effort has completely changed his view of sex solicitation.

"If I saw a prostitute, I would have thought, 'Hey, that's what they want to do.' Now I know what signs to look for," Tahour says. "I know what actions to take. Be on the lookout for this. This is what's going on out there, and these people need a hero."