Accessibility links
What Price Happiness? Pretty Expensive, According To 'The Invoice' Jonas Karlsson's clever parable follows an average guy who Is uncommonly content with his lot in life — until he gets an astronomical bill from a sinister entity trying to redistribute happiness.

What Price Happiness? Pretty Expensive, According To 'The Invoice'

What Price Happiness? Pretty Expensive, According To 'The Invoice' 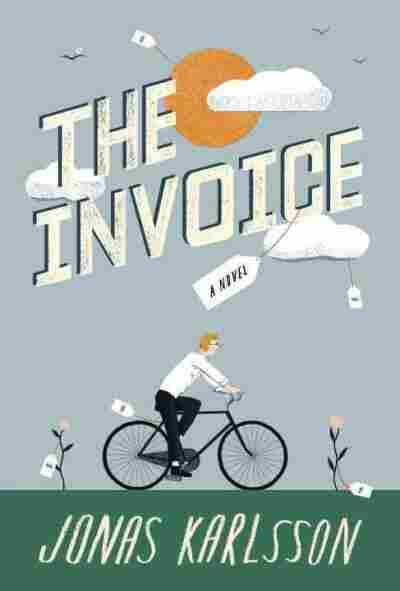 The unassuming hero of Jonas Karlsson's clever, Kafkaesque parable is the opposite of a malcontent. Despite scant education, a limited social life, and no prospects for success as it is usually defined, he's that rarity, a most happy fella with an amazing ability to content himself with very little. But one day, returning to his barebones flat from his dead-end, part-time job at a video store, he finds an astronomical bill from an entity called W.R.D. He assumes it's a scam. Actually, it is more sinister — and it forces him to take a good hard look at his life and values.

Karlsson is a Swedish actor and playwright whose previous novel, The Room, skewered corporate culture with a darkly comic story about an earnest new employee's determination to dodge the open-plan cubicles and creepy conformity of his co-workers by escaping into a secret space. The Invoice explores how we define a happy life through the trials of another plain-spoken everyman teetering between banality and absurdity. Both of these novels, as tightly constructed as theatrical plays, are laced with incisive criticism of our soul-sapping world of coldblooded bureaucracy. Karlsson expertly wrings humor from the contrast between the bizarre, increasingly alarming circumstances in which his narrators find themselves and their low-key, matter-of-fact responses.

Most people would freak out if they were to receive an outlandishly large invoice they had no possibility of paying yet no way of dodging. But Karlsson's fall guy refuses to fall. When he finally calls the payment clearance company, wait times on the phone queue fluctuate crazily, lengthening the longer he hangs on. This alone would send most of us into a tailspin.

The dispassionate corporate cog named Maud Andersson who finally picks up explains the deal cryptically and begrudgingly, as if for the thousandth time. W.R.D. — World Resources Distribution — is a strange sort of humanitarian aid program that aims to compensate countries with fewer happy people by having nations with more happy people spread the wealth. To fund the project, happiness must be monetized: Individuals worldwide are evaluated for their lifetime level of Experienced Happiness and charged a onetime fee on a sliding scale.

Karlsson expertly wrings humor from the contrast between the bizarre, increasingly alarming circumstances in which his narrators find themselves and their low-key, matter-of-fact responses.

Our hero's astronomical bill is the result of 39 years of contentedness. In other words, this simple soul is being penalized for a positive attitude, which has led to off-the-charts scores on his "E.H. quotient," even higher than millionaires. Against all odds, it turns out he's not just a most happy fella, but perhaps the most happy fella.

Maud, his case manager, asks him about his dreams and feelings and chides him: "Do you imagine all that is free?" He quickly sees her point, and his reaction is totally in character: "I hauled myself up on to the sofa, thinking that somewhere at the back of my mind I'd always had an inkling about this. The feeling that life couldn't really be this simple."

Karlsson plays this absurd situation to hilarious effect as his mild, unflappable narrator calmly re-evaluates an empty, aimless life that would depress the hell out of most people. "Maybe I didn't take problems seriously enough, and just took everything that was thrown at me without protest. Was I too gullible, too accepting? Should I set higher demands?" he wonders.

But this guy just can't stay worried or angry for long. In no time, he's back to happily staring out the window of his shabby apartment or amusing himself with "a new way of puffing out my cheeks."

Karlsson is in his element sending up W.R.D.'s vast granite headquarters, with its officious number-crunchers murmuring ominously about this "perversely happy person" and his "Zero poverty rating ... whiteness premium, male premium ... No problems sleeping ... almost absurd levels of pleasure ... And full access to his feelings." Increasingly intimate all-night phone calls with Maud — in which their radically different responses to one of his favorite movies encapsulate the gulf between their E.H. scores — add another rich dimension to this skillfully executed fable.

One of the many trenchant questions The Invoice asks is, What price happiness? But even better, this droll satire reminds us that sometimes there's just no accounting for joy.