Accessibility links
Remembering A Career Prosecutor Who Leaned Into Controversy — And Took The Heat David Margolis died Tuesday after serving 51 years at the Justice Department. In those years, he touched nearly every major case and controversy. 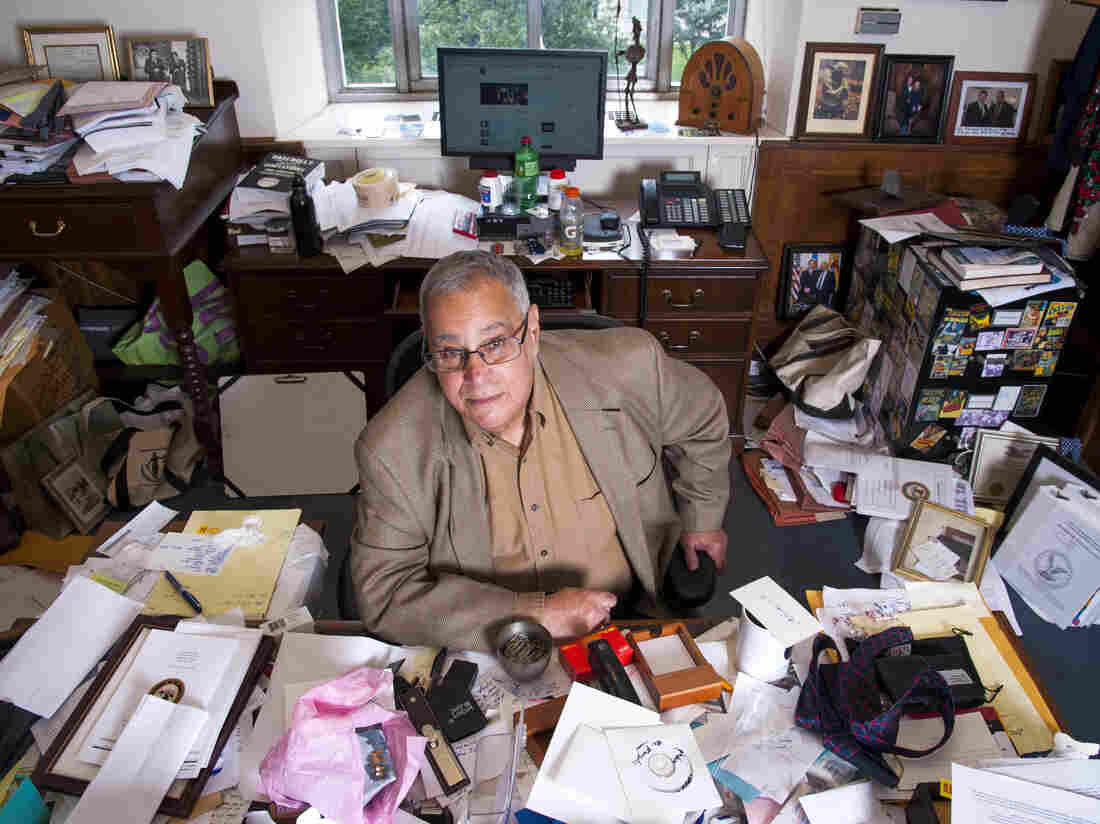 David Margolis at his desk in June 2015. The Washington Post/Getty Images hide caption 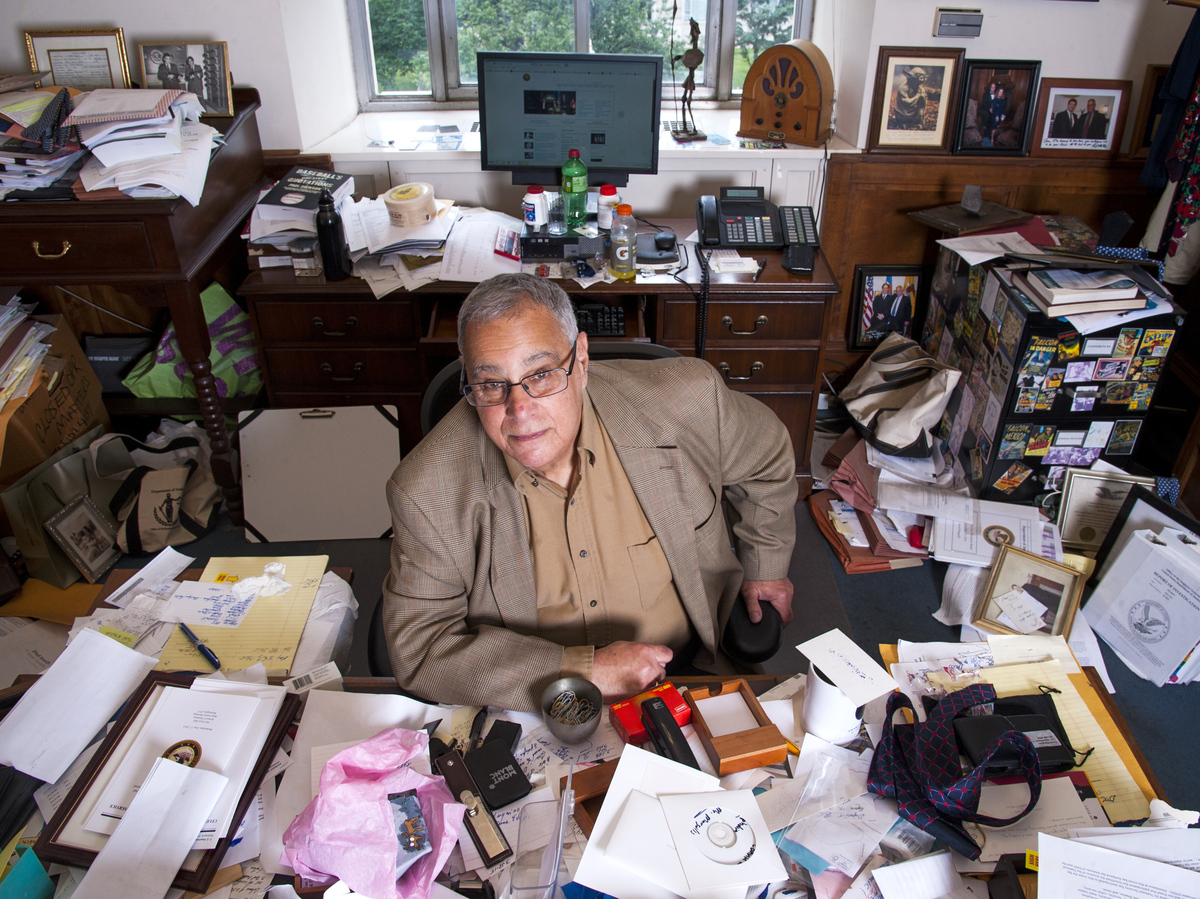 David Margolis at his desk in June 2015.

It can be hard to distinguish among the men wearing gray suits and regulation haircuts on Pennsylvania Avenue in Washington. But David Margolis always brought a splash of color.

It wasn't his lovably disheveled wardrobe, or his Elvis ring, but something else: the force of his flamboyant personality. Margolis, a graduate of Harvard Law School, didn't want to fit in with the crowd. He wanted to stand out.

Margolis, 76, died Tuesday after putting in 51 years of service to the Justice Department. In those years, he touched nearly every major case and controversy for a generation or more.

When he fell and injured his elbow last year, colleagues in the deputy attorney general's office avoided a flower bouquet and instead sent him an assortment of deli meats.

Margolis arrived at the Justice Department wearing bushy sideburns and a leisure suit, a hot shot pursuing organized crime and drug cartels in the late 1960s and 1970s.

While his cohort left public service after a few years to go make money, Margolis remained. He went on to become the most senior career lawyer at the Justice Department, a fearless troubleshooter for political appointees like Democrat Jamie Gorelick.

Margolis specialized in using humor to take important people down a peg. He famously dubbed straight-laced former FBI Director Robert S. Mueller III "Bobby Three Sticks" and upon his retirement, teased that Mueller, a former Marine, would have made an excellent drill instructor on Parris Island.

And as for Gorelick, she said, laughing, "He used to refer to me as deputy attorney general as 'the bionic babe.' Who does that? Who does that?" 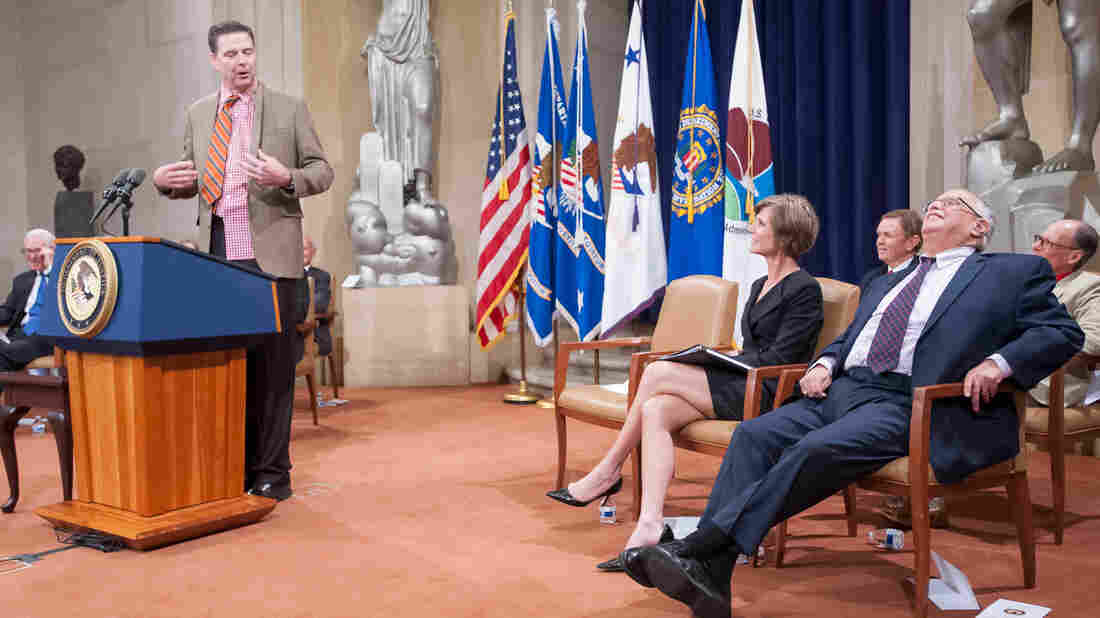 Margolis laughs as FBI Director James Comey appears at the lectern dressed as him for his 50-year-pin ceremony in 2015. Lonnie Tague/Courtesy Justice Department hide caption 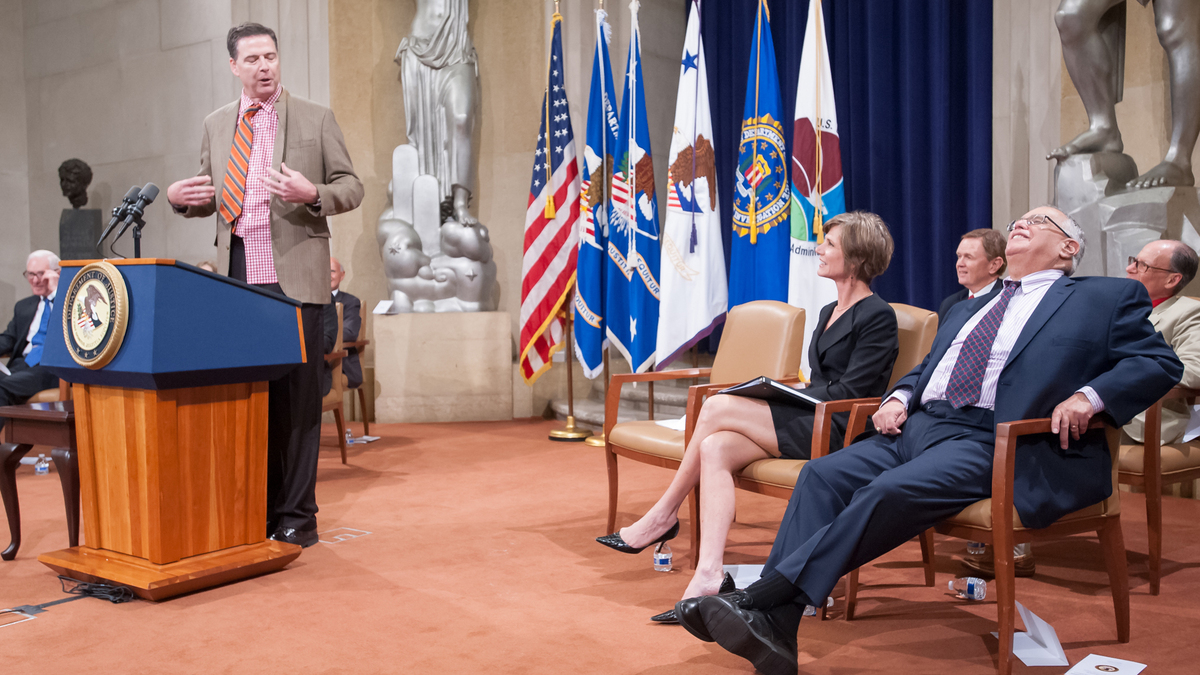 Margolis laughs as FBI Director James Comey appears at the lectern dressed as him for his 50-year-pin ceremony in 2015.

Margolis became the punchline last year, when Justice Department officials of Democratic and Republican administrations flocked to the building's Great Hall to honor him for 50 years of service. Current FBI Director James B. Comey donned a lackluster sport coat, a checked shirt partially hanging out the front of his pants, and an orange-striped tie as homage to Margolis' eccentric fashion sense.

Not everyone laughed. Over his long tenure, Margolis made judgments about which prosecutors should face discipline. Critics are still angry about his decision not to punish lawyers who approved waterboarding and other brutal interrogation during the George W. Bush years. They also say Margolis went soft on prosecutors who engaged in misconduct against late Republican Sen. Ted Stevens of Alaska. 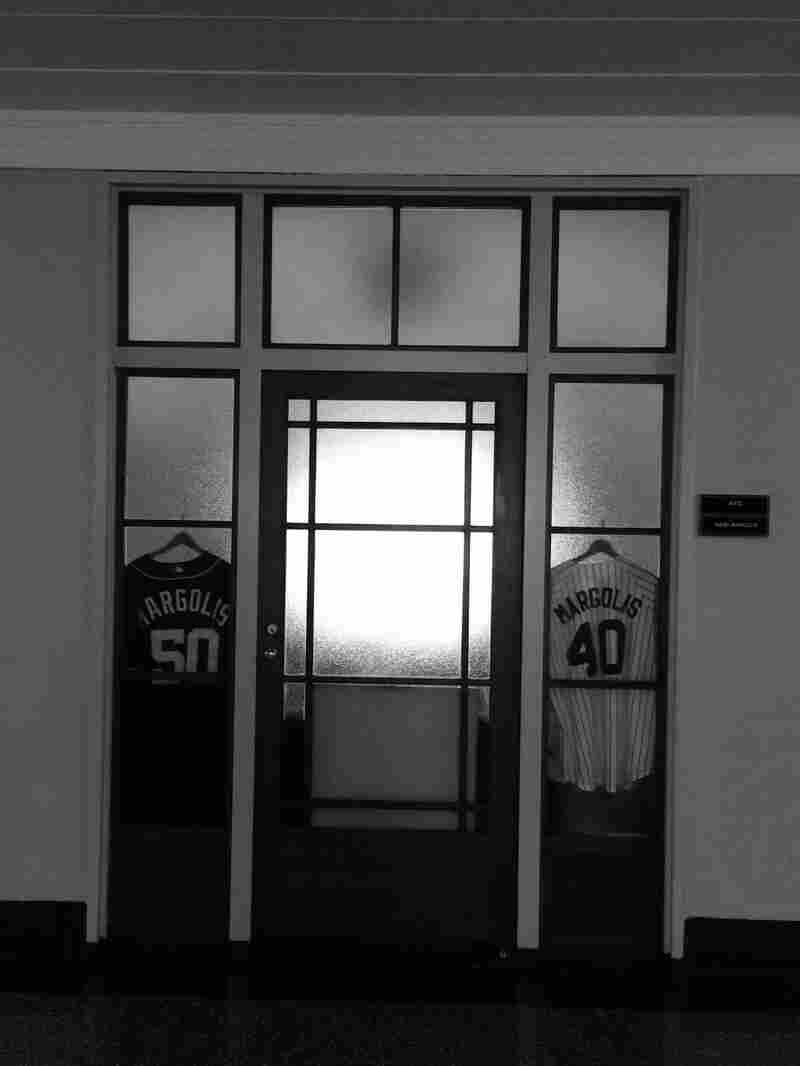 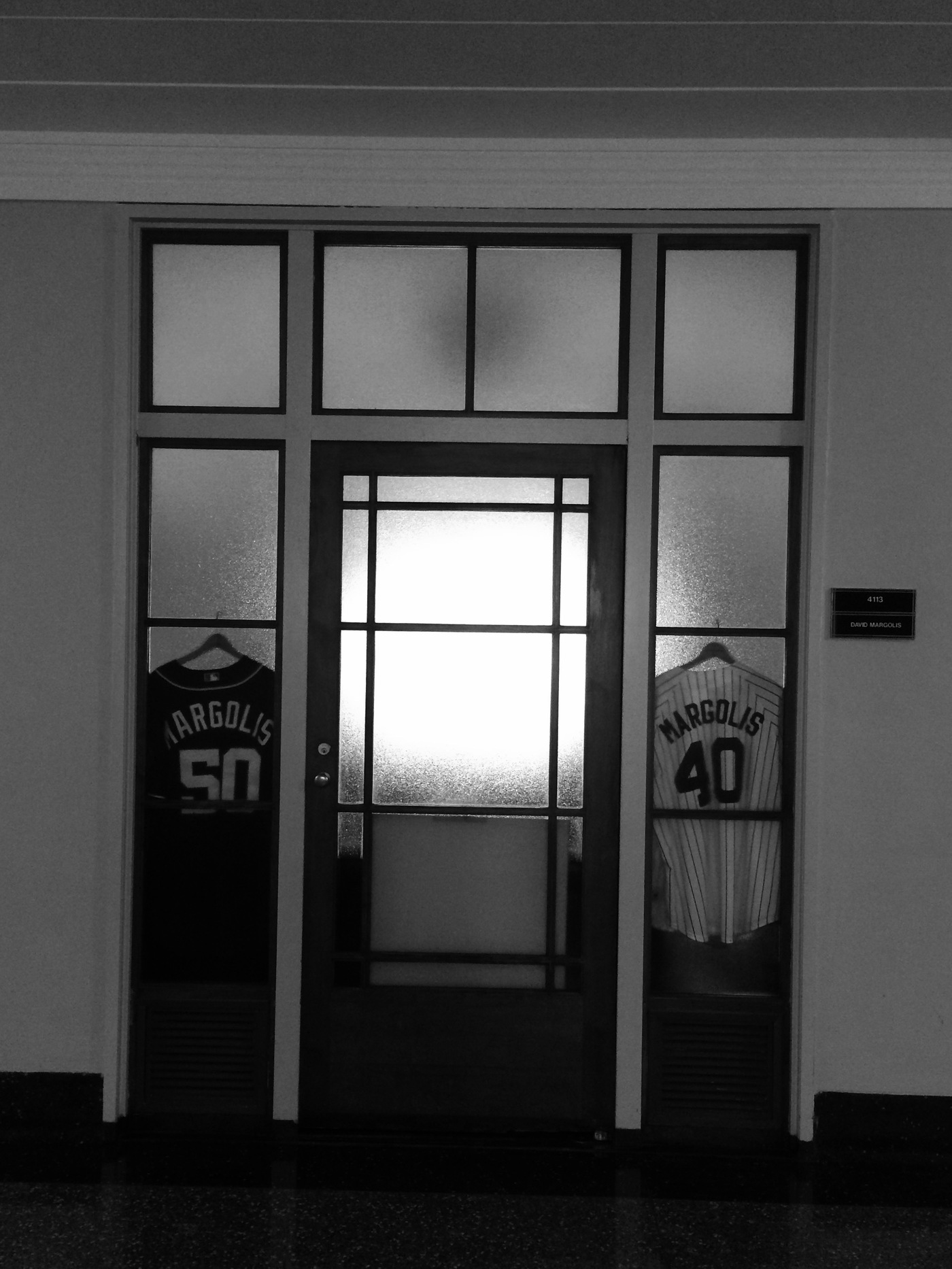 Margolis took the heat for the political appointees who served as his nominal bosses, and as usual, made no public response.

His friend Comey says Margolis "was the United States Department of Justice."

Comey added: "He was what we all hope to be. 'Irreplaceable' is usually hyperbole; here, it is simply true."

Margolis' death Tuesday afternoon followed a series of health troubles. In 1995, his heart stopped in his messy office on the fourth floor at the Justice Department.

But Margolis bounced back with the help of a quadruple bypass. He stopped smoking Marlboros and went back to work. Saturdays, too.

In all, the National Association of Former U.S. Attorneys says he served 20 different attorneys general, a career path he once told NPR might be a relic.

"Washington is a tough place to live and work so with all that in mind I don't see people staying as long anymore," Margolis said back in 2007.

On Wednesday, his office at Justice headquarters is dark. Two baseball jerseys bearing the name "Margolis" still hang in the windows.