Accessibility links
Obama Walks Fine Line On Race And Policing In the wake of last week's deadly police shootings and the attack on officers in Dallas, President Obama's message has been fairly consistent. Is anyone listening? 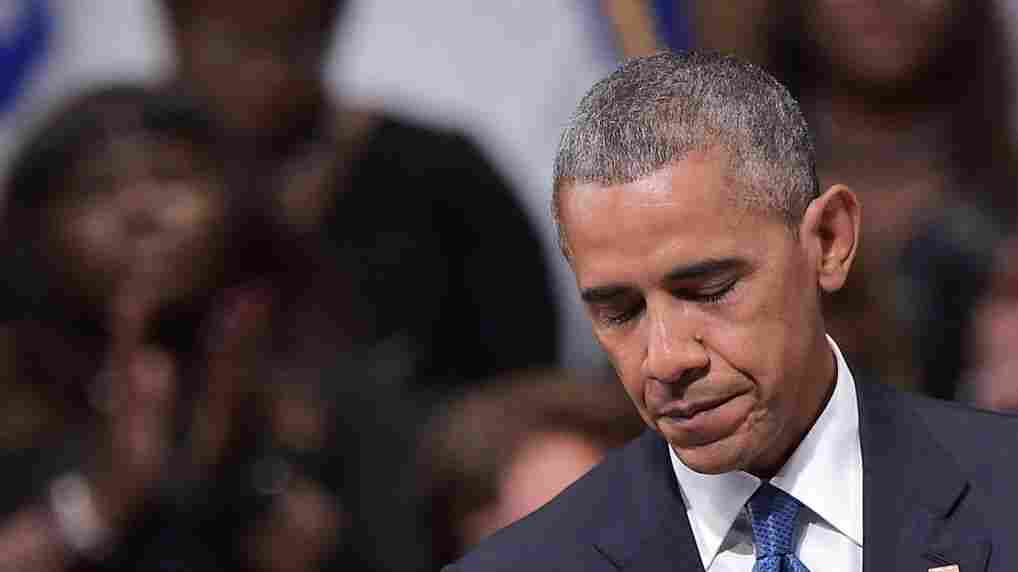 President Obama pauses during remarks at an interfaith memorial service for the victims of the Dallas police shooting at the Morton H. Meyerson Symphony Center on July 12 in Dallas, Texas. Mandel Ngan/AFP/Getty Images hide caption 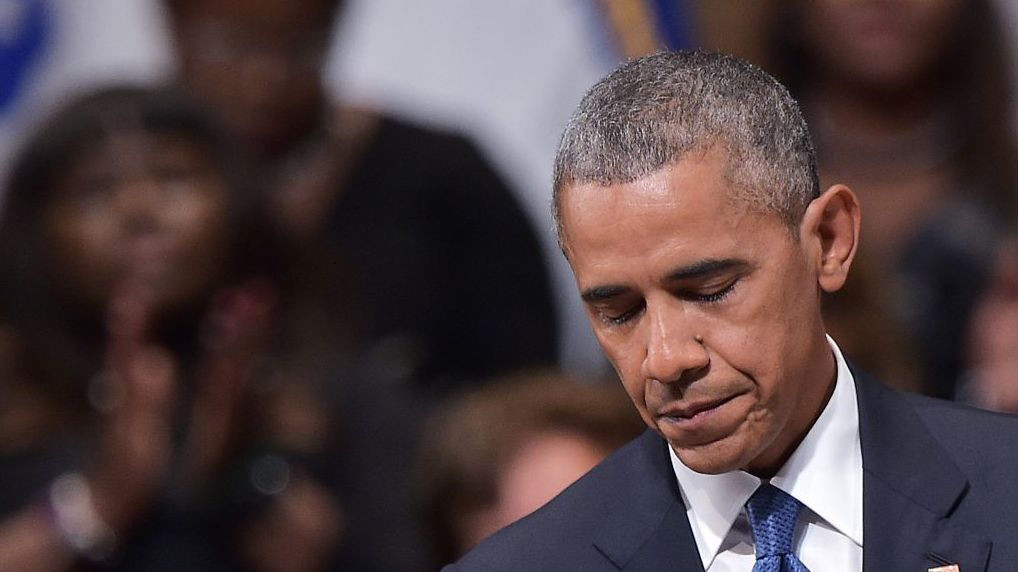 President Obama pauses during remarks at an interfaith memorial service for the victims of the Dallas police shooting at the Morton H. Meyerson Symphony Center on July 12 in Dallas, Texas.

President Obama is challenging Americans to have an honest and open-hearted conversation about race and law enforcement. But even as he sits down at the White House with police and civil rights activists, Obama is mindful of the limits of that approach.

Obama At Dallas Memorial: 'We're Not As Divided As We Seem'

'This Is Not How We Want Our Communities To Operate,' Obama Says After Deadly Week

The president has spoken often about the tensions between police and minority communities — not just in the last week but also after the deaths of Michael Brown, Eric Garner, and Freddie Gray. What's striking is just how consistent Obama's message has been. In each instance, he acknowledges the difficult and dangerous work that police do. He calls attention to systemic racial disparities in law enforcement and the resulting distrust in some communities. And he offers context, arguing that policing issues are a symptom of broader social challenges that tend to get less attention.

These are words from a policymaker who has thought long and hard about these issues, at least since his days as a state Senator in Illinois, where Obama championed a law to document racial profiling. They're also words from a man who could say, as Dallas Police Chief David Brown did this week, "I've been black a long time."

"Our police officers put their lives on the line for us every single day," Obama said in the fall of 2014, after a grand jury declined to return a criminal indictment in the Ferguson, Mo. death of Michael Brown. "They've got a tough job to do to maintain public safety and hold accountable those who break the law."

Every man or women in uniform are putting their lives at risk to protect us.

Less than two weeks later, a grand jury in New York declined to bring charges against police in the death of Eric Garner. "Law enforcement has an incredibly difficult job," Obama said at the time. "Every man or women in uniform are putting their lives at risk to protect us."

And when violence erupted in Baltimore in the spring of 2015, following the death of Freddie Gray, who died after suffering a spine injury while in police custody, Obama paused to acknowledge the police officers who were injured in the rioting. "It underscores that that's a tough job and we have to keep that in mind," the president said.

Even as he praises the vast majority of police as hard-working and well-meaning, Obama has drawn attention to racial inequities that contribute to friction with minority communities. "The law too often feels as if it is being applied in discriminatory fashion," the president said after Ferguson. "These are real issues and we have to lift them up and not deny them or try to tamp them down."

When incidents like this occur, there's a big chunk of our fellow citizenry that feels as if because of the color of their skin, they are not being treated the same. And it hurts. And that should trouble all of us.

He repeated that message when the grand jury in New York issued its Garner decision in December of 2014. "We are seeing too many instances where people just do not have confidence that folks are being treated fairly," Obama said. "In some cases, those may be misperceptions. But in some cases, that's a reality."

Obama detailed that reality last week, citing research that found African Americans are more likely to be stopped, searched, and shot by police than whites are. "These are facts," Obama said. "And when incidents like this occur, there's a big chunk of our fellow citizenry that feels as if because of the color of their skin, they are not being treated the same. And it hurts. And that should trouble all of us."

It's Not Just About Police

While violence involving police often makes the headlines, Obama argues that's merely the flash point of larger, long-simmering problems. "Too often we're asking police to man the barricades in communities that have been forgotten by all of us for way too long," the president said last week, citing inadequate schools and a lack of economic opportunity.

That point was echoed by Dallas Police Chief David Brown, who complained law officers are expected to keep a lid on every social problem from mental illness to stray dogs. "We're asking cops to do too much in this country," Brown said. "Policing was never meant to solve all those problems."

Obama made the same case more than a year ago, when asked about the protests that greeted Freddie Gray's death in Baltimore. "We can't just leave this to the police," Obama said.

If we cannot talk honestly and openly — not just in the comfort of our own circles, but with those who look different than us or bring a different perspective — then we will never break this dangerous cycle.

"In communities where there are no fathers who can provide guidance to young men; communities where there's no investment and manufacturing has been stripped away; and drugs have flooded the community and the drug industry ends up being the primary employer for a whole lot of folks — in those environments, if we think we're just going to send the police to do the dirty work of containing the problems that arise there without as a nation and as a society saying what can we do to change those communities, to help lift up those communities and give those kids opportunity, then we're not going to solve this problem," he said. "And we'll go through the same cycles of periodic conflicts between the police and communities and the occasional riots in the streets, and everybody will feign concern until it goes away, and then we'll go about our business as usual."

This week, as the country is once again gripped by conflict involving police, the president is urging Americans not to retreat to their partisan bunkers, but instead to try to imagine the hopes and fears of one another. At the Dallas memorial service honoring five fallen law officers, Obama made a point to acknowledge Alton Sterling and Philando Castile, the two black men who died last week at the hands of police.

"If we cannot talk honestly and openly--not just in the comfort of our own circles, but with those who look different than us or bring a different perspective--then we will never break this dangerous cycle," the president said. "In the end, it's not about finding policies that work. It's about forging consensus and fighting cynicism and finding the will to make change."