Accessibility links
What Do Contested Conventions Look Like? Ask Hollywood And Sinclair Lewis Thanks to movies, novels and TV, Bob Mondello knows what a contested convention would be like: raucous crowd, oppressive din and (if movies are any guide) Angela Lansbury scheming in the corner.

Listen · 6:42 6:42
What Do Contested Conventions Look Like? Ask Hollywood And Sinclair Lewis 6:42 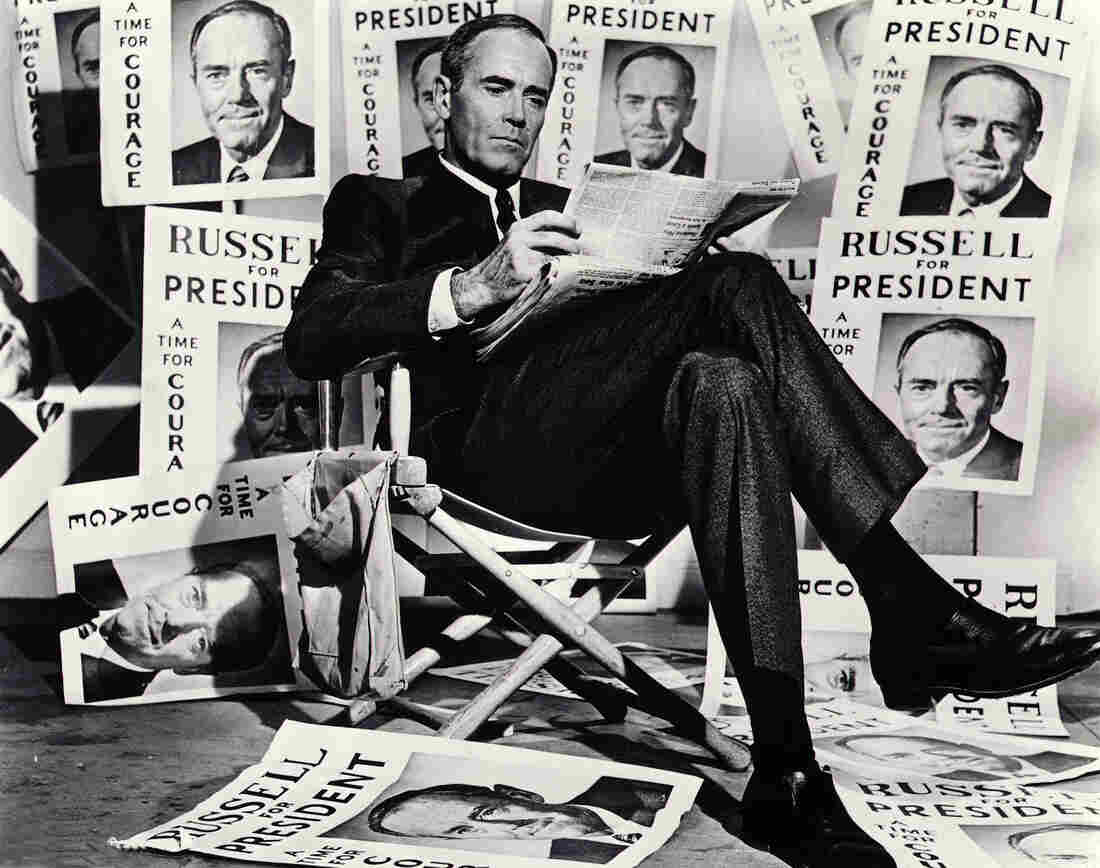 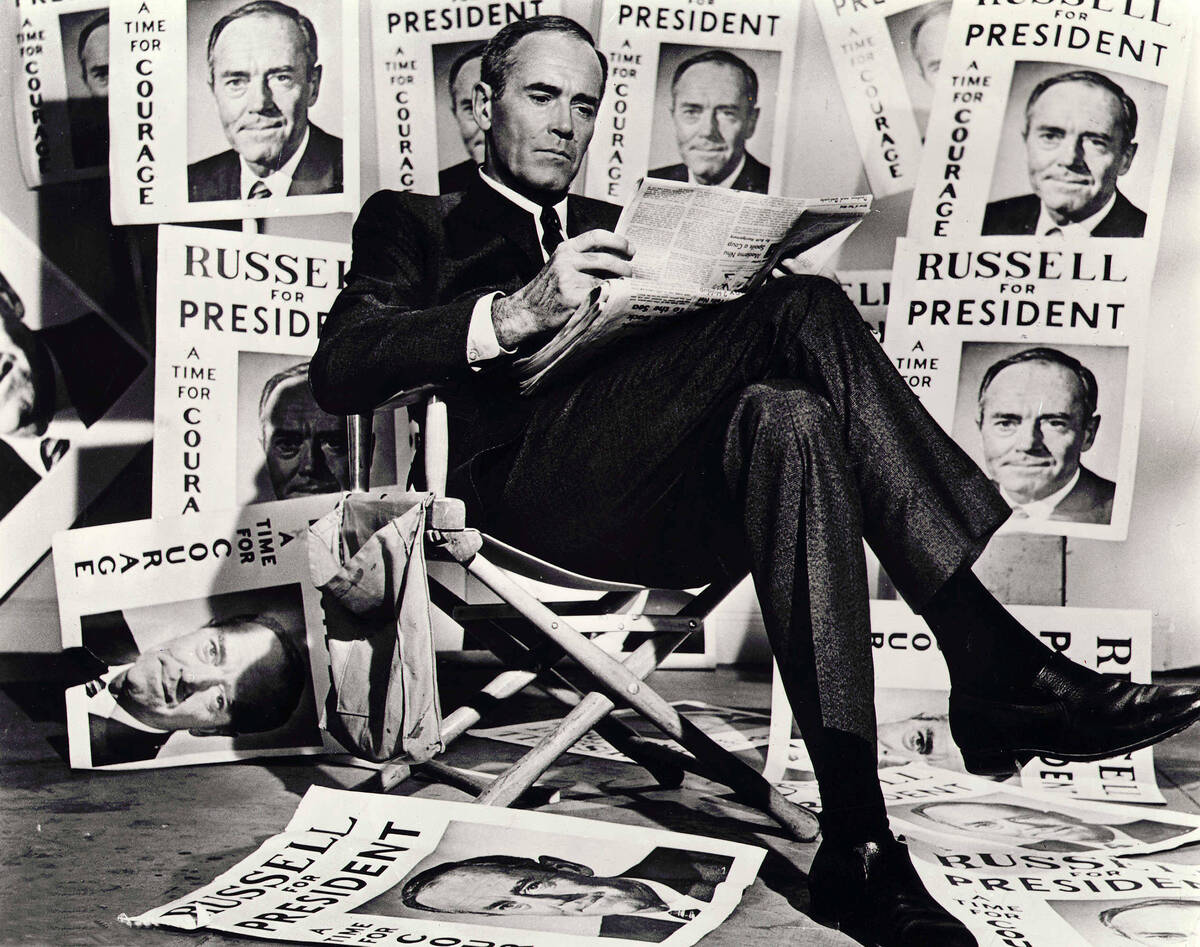 Over the next two weeks, Republicans and Democrats will gather in Cleveland and Philadelphia for a ritual that has become almost entirely ceremonial: Each party will "select" pre-selected presidential candidates.

Of course, it's all for show. There hasn't been a second round of voting (a second ballot) at a major party presidential convention since 1952. But I know exactly what a "contested" convention would be like, and I bet you do, too.

Here's what I picture: The crowd is raucous, the din oppressive, and a whole lot of once-pledged-but-now-freed-up delegates are being furiously lobbied. Delegate counters in the White House, as well as in opposing camps, are pulling out hair, shouting into phones and smoking up a storm.

I can see all this in my mind's eye because I've already seen it on TV: The West Wing featured a contested convention a decade ago, and House of Cards did the same thing this season — the latter even threw a female secretary of state into the mix. 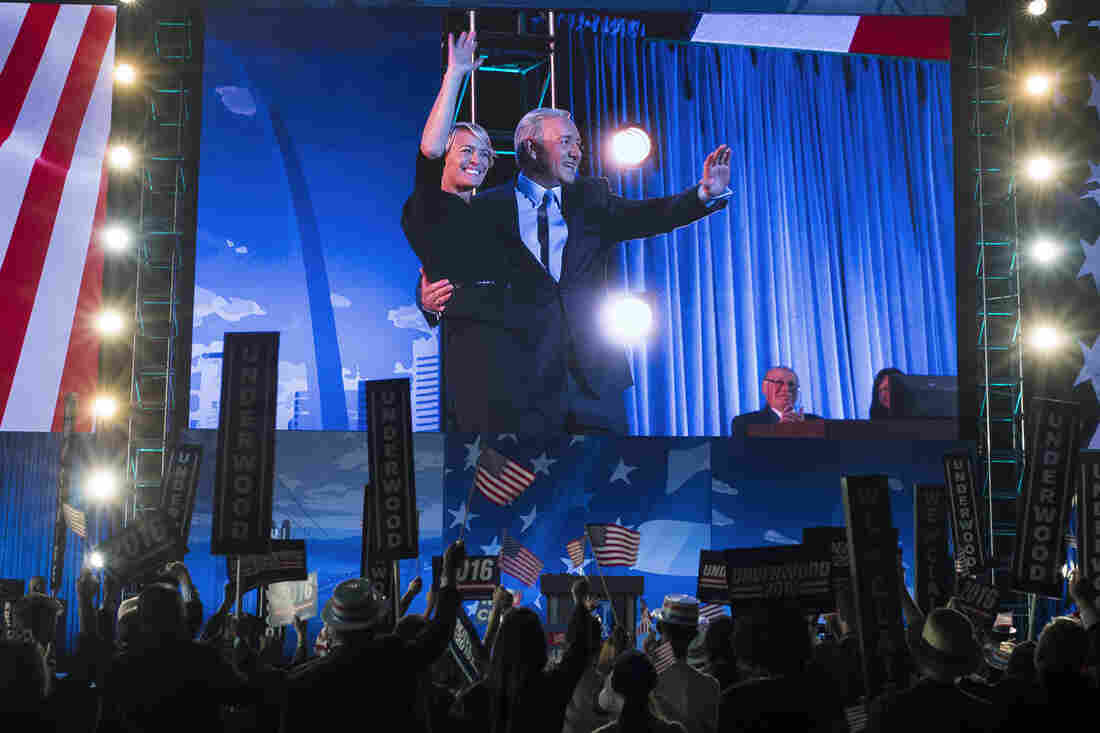 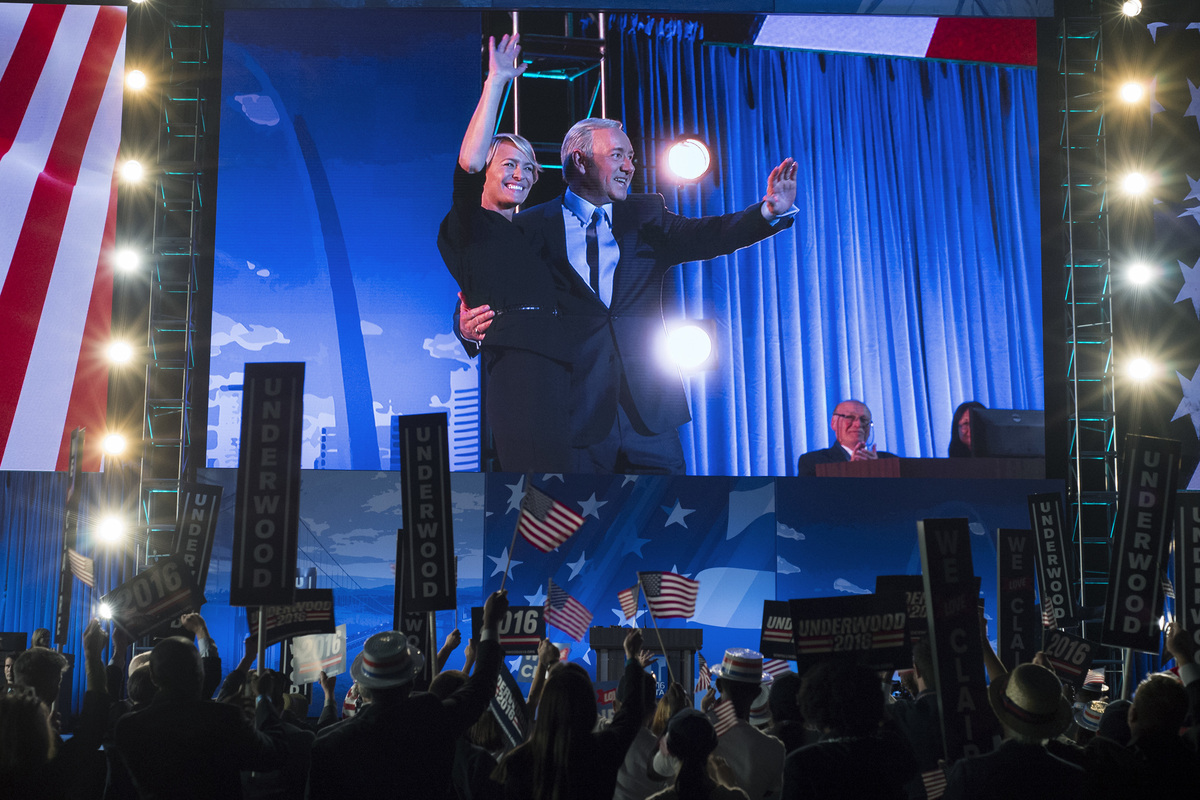 In the House of Cards convention, multiple ballots bring surprises for first couple Claire and Frank Underwood (Robin Wright and Kevin Spacey), including one involving a female secretary of state.

Why dramatize brokered conventions? Well, a "conventional" convention isn't very interesting. If, as usually happens, primary voters have already selected the nominee before the delegates gather, there's no drama, just speeches and a vote where everyone knows the outcome, but it still takes ages to get to the balloon drop. Or, as someone barked on The West Wing, it's not so much "democracy in action" as "agriculture in action — like watching grass grow."

The dramatic appeal of a second ballot is that those committed delegates stop being committed. And once that happens, as characters in HBO's political comedy Veep discovered, the possibilities are endless. "It's like Christmas, except happy," says one staffer. 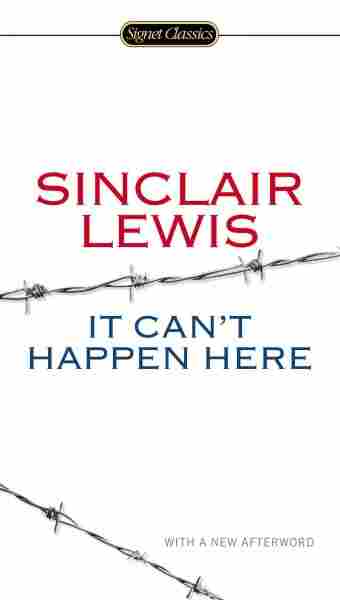 Television makes much of this because television had just been born in 1952, when it got to cut its teeth on conventions by covering the Democrats as they took three ballots to nominate Adlai Stevenson. TV had only just gone national at that point and nobody had figured out yet how to stage things for the camera — there were barely any signs or balloons, no cameras sweeping the hall. But there was suspense about the outcome, and that kept audiences tuned in.

The first year radio covered a convention, in 1924, it took 103 ballots (no, that's not a typo) for Democrats to choose someone to lose to Calvin Coolidge. It was in between those two real-life contests that conventions started intriguing fiction writers. Novelist Sinclair Lewis made a contested convention central to his Depression-era novel It Can't Happen Here, which envisions the rise of a populist who sounds surprisingly contemporary. Fictional candidate Buzz Windrip believes that the U.S. should be run like a corporation. His rallies are marked by violence, he argues that the U.S. should go to war with Mexico, and, over the objections of his own party's bosses, he becomes not just president but a Hitler-like dictator.

Windrip's rise starts at a contested convention (in Cleveland!) where party leaders, the media and large swaths of the public watch helplessly as he claims to have (and I'm quoting the novel here):

"thoroughly tested (but unspecified) plans to make all wages very high and the prices of everything produced by these same highly paid workers very low; that he was 100 per cent for Labor, but 100 per cent against all strikes; and that he was in favor of the United States so arming itself, so preparing to produce its own coffee, sugar, perfumes, tweeds, and nickel instead of importing them, that it could defy the World ... and maybe, if that World was so impertinent as to defy America in turn ... he might have to take it over and run it properly."

It's quite a read.

In the novel, it takes 92 pages to get this populist his party's nomination. Things necessarily zip along faster in movie screenplays, like the one for State of the Union (1948), where an anti-communist newspaper owner (Angela Lansbury) tries to deadlock a convention to win her married boyfriend (Spencer Tracy) the candidacy. 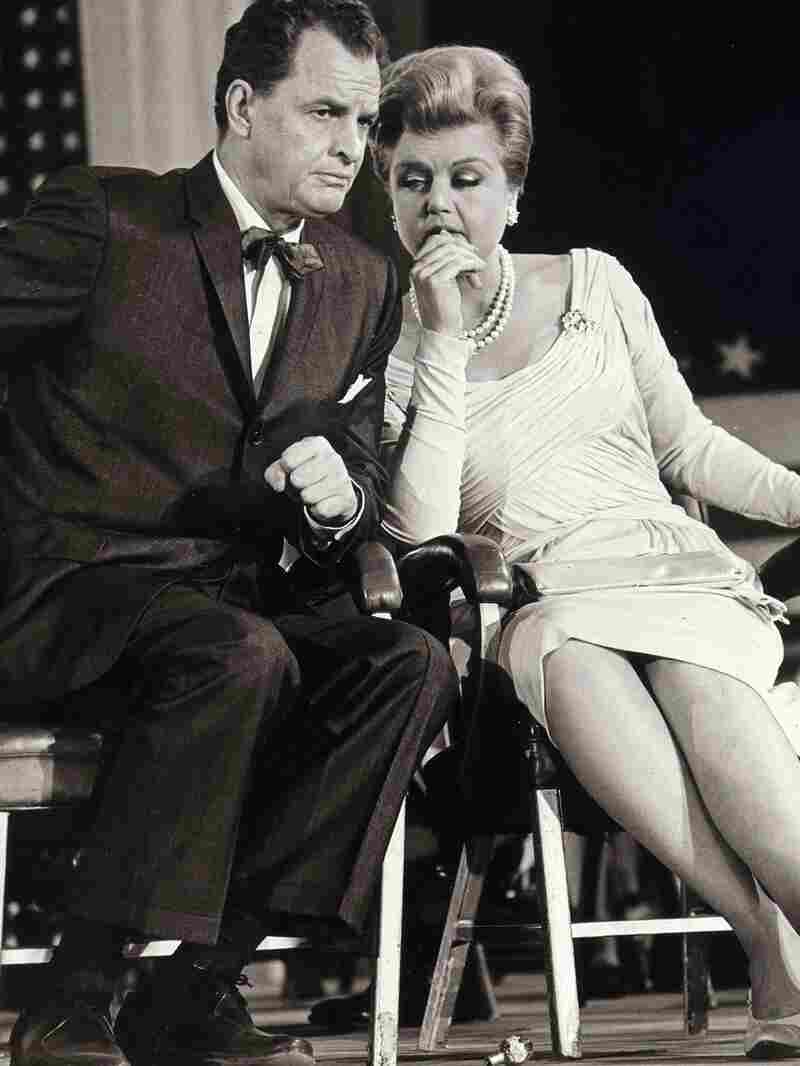 Angela Lansbury had a minor career going as a candidate-whisperer in The Manchurian Candidate (pictured, with James Gregory) and State of the Union. United Artists/The Kobal Collection hide caption 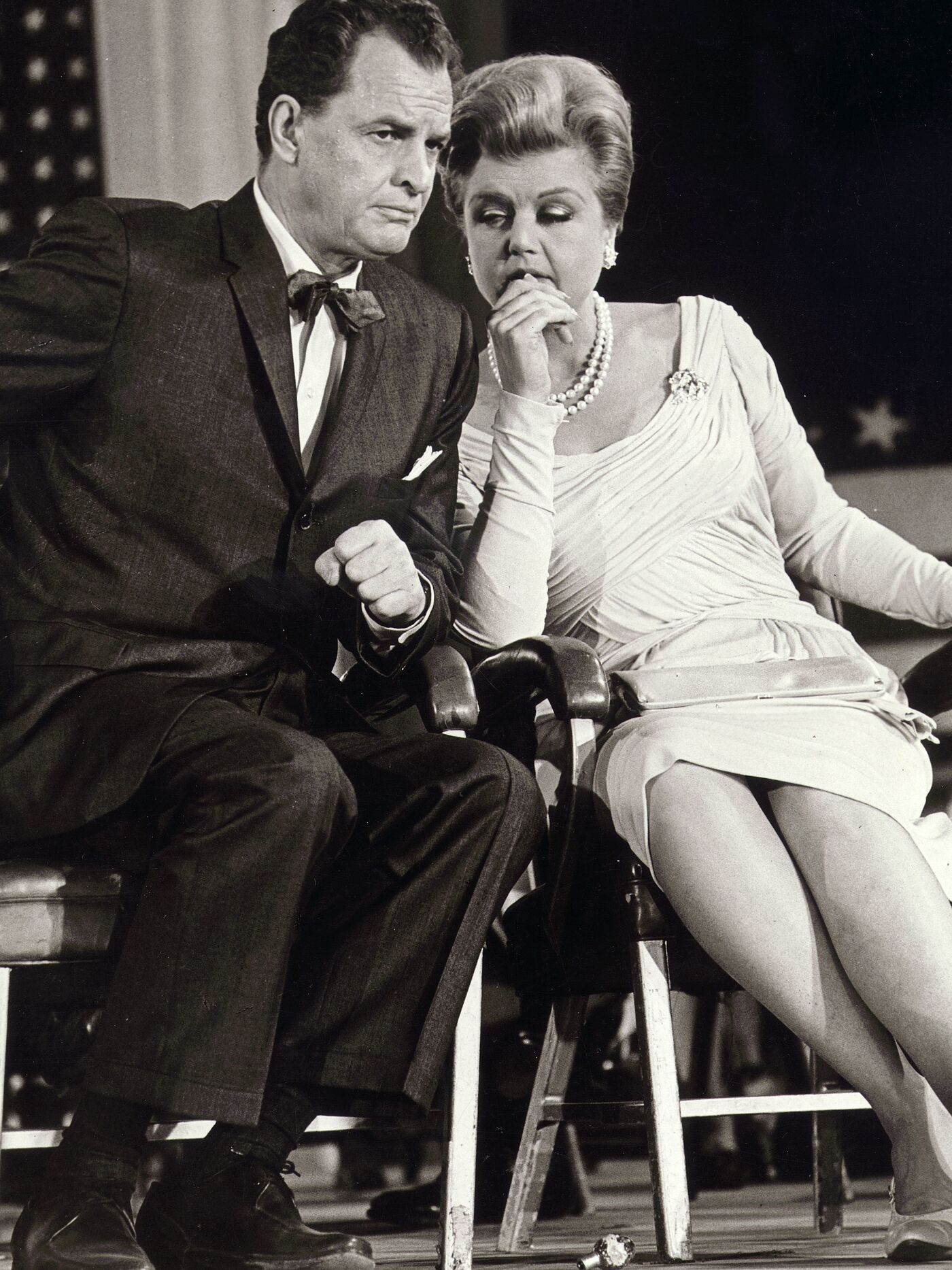 Angela Lansbury had a minor career going as a candidate-whisperer in The Manchurian Candidate (pictured, with James Gregory) and State of the Union.

One thing you learn from movies featuring political conventions: Angela Lansbury should not be allowed anywhere near them. Fourteen years after State of the Union, her Red-baiting had turned considerably more forceful in The Manchurian Candidate (1962), and this time she wasn't just plotting to deadlock — she was plotting an assassination.

The Manchurian Candidate paints about as dire a portrait of a political convention as there's ever likely to be, but other works have doodled intriguingly around convention-al edges — like Gore Vidal's Broadway play The Best Man, which opened during the 1960 Kennedy-Nixon campaign and was turned into a movie in time for the 1964 Johnson-Goldwater one.

The Best Man was designed to settle a few scores. Vidal was a political commentator who idolized Adlai Stevenson and didn't have much use for the Kennedys. So when one of his dueling onscreen candidates was a principled intellectual (Henry Fonda) and the other a younger, TV-savvy, craven opportunist (Cliff Robertson), it wasn't hard for audiences to guess who was supposed to be whom. Especially when Fonda snaps in the general direction of his opponent's image on a TV screen that, "I wouldn't buy a used car from that man." Though that line is directed at the JFK-like candidate in The Best Man, it's a riff on an anti-Nixon campaign poster ("Would you buy a used car from this man?") because Vidal knew that blurring lines a little makes the trompe l'oeil more effective.

And those kinds of reality-echoing lines are just as fashionable today — think of Kevin Spacey excusing himself from a difficult press conference in House of Cards by saying that as much as he would like to stay and chat, "the business of the presidency trumps running for it." That particular verb — trumps — has added resonance this year, as the writers no doubt knew when they employed it in their version of an unconventional convention.