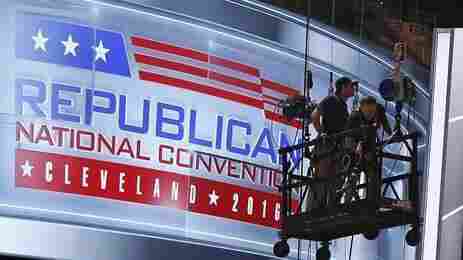 The main stage on the convention floor at the Quicken Loans Arena in downtown Cleveland is prepared for the upcoming Republican National Convention on Wednesday. Gene J. Puskar/AP hide caption

The Republican National Committee has released a list of 62 speakers for next week's convention, and it is notable both for who is on it and who is not on it. Trump's convention will have the star power of a famous tech entrepreneur and a former soap opera actor (Sabato).

(The New York Times originally reported that football player Tim Tebow would speak, though he was not included on the RNC's official list. In a video on Instagram, Tebow later said it was just a rumor.)

Trump's speakers list is not as politician-heavy as the 2012 convention schedule, which mostly featured members of Congress, governors and former politicians as speakers.

The 2016 convention will be Trump-family-heavy — Donald Trump's wife, Melania, is included as a speaker, as well as four of his children: Donald Trump Jr., Eric Trump, Ivanka Trump and Tiffany Trump.

The speakers list also suggests that the nominee does not hew closely to at least one part of the new Republican platform. Tech entrepreneur Peter Thiel, who has in the past identified himself as libertarian, is also gay and supports gay marriage. The RNC platform, drafted this week, defines "natural marriage" as being between a man and a woman.

The list also shows that Trump will have the support of several top Republicans, including Speaker Paul Ryan, as well as several of Trump's rivals for the nomination, like Sen. Ted Cruz, Gov. Scott Walker and Ben Carson.

But the list is also notable for who is not on it. It does list New Jersey Gov. Chris Christie and former Speaker of the House Newt Gingrich, but it doesn't list Indiana Gov. Mike Pence — all three of those men are considered to be at the top of Trump's list of potential running mates. However, it's unclear whether the list telegraphs anything about whom Trump will choose.

All four had previously said they would not attend this year's convention. Bob Dole, the 1996 Republican nominee, is the only former nominee expected to attend (though he is not listed as a speaker).

The RNC characterized its list of 62 names as "partial," so others could still be added. Below is the list that the RNC sent out: