Accessibility links
Detroit's Working Class Men Split On Donald Trump If Trump wants to win Michigan, he's got to win over working-class white men in suburban Detroit. But that will be tough. The state hasn't backed a Republican presidential candidate since 1988. 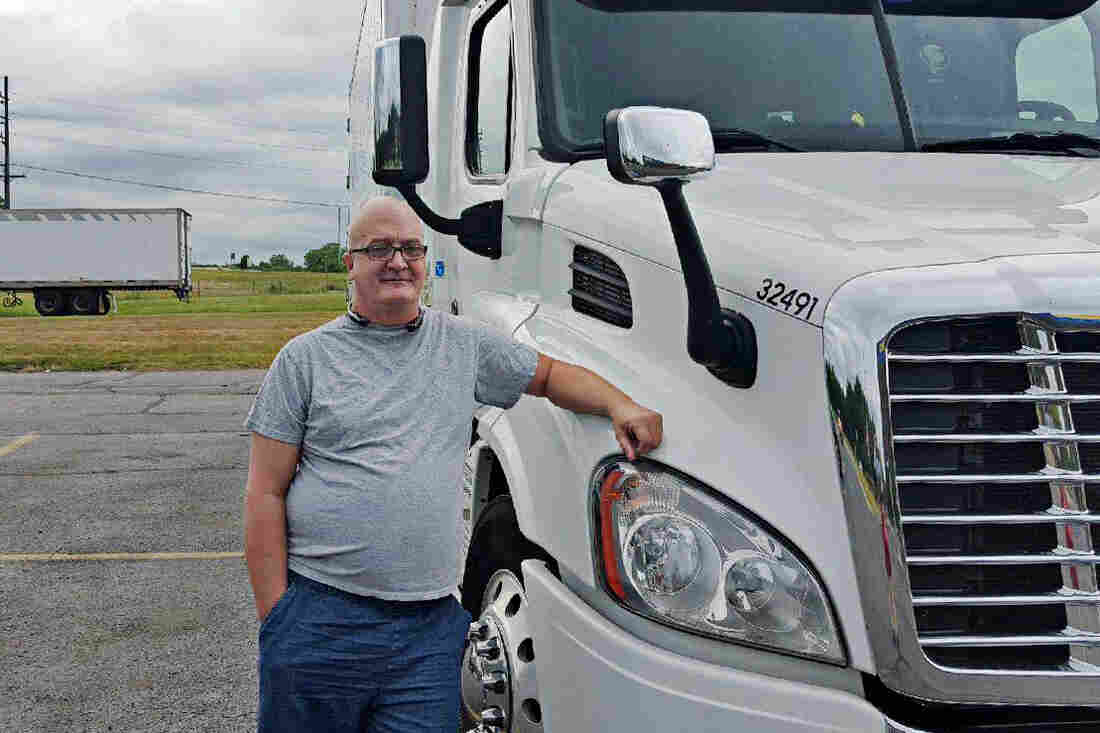 Scott Klein, 55, is a long-haul truck driver and former Sanders supporter. He is undecided which candidate he will vote for in the coming election, but does not like Trump, which sets him apart from most of the other drivers he talks to. Don Gonyea/NPR hide caption 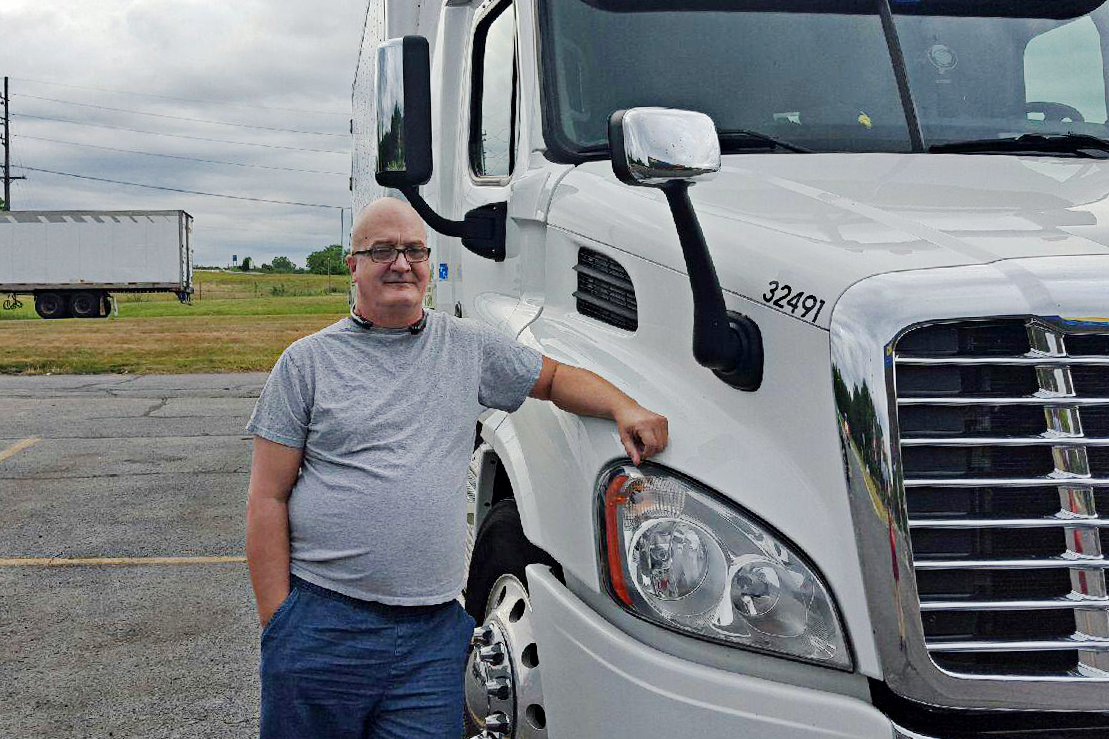 Scott Klein, 55, is a long-haul truck driver and former Sanders supporter. He is undecided which candidate he will vote for in the coming election, but does not like Trump, which sets him apart from most of the other drivers he talks to.

This story from the Detroit suburbs is a part of A Nation Engaged, a series where NPR and several member stations are taking a look at battleground communities.

Donald Trump is pinning his election hopes on a group of voters with long ties to the Democratic Party, but who've been known to abandon that loyalty — from time to time — to vote Republican.

With these voters, it's clear Hillary Clinton still has work to do. I saw that when I visited one of their homes in Garden City, just west of Detroit.

That's where, if you stop by Larry McCool's house, you'll be greeted by a trio of giant Rottweiler dogs.

He tells me they're friendly and not to worry. Maxie and Azul, ages 12 and 2, are both rescue dogs, and Coco, who looks like a small bear is angling to play fetch with my microphone in the backyard. 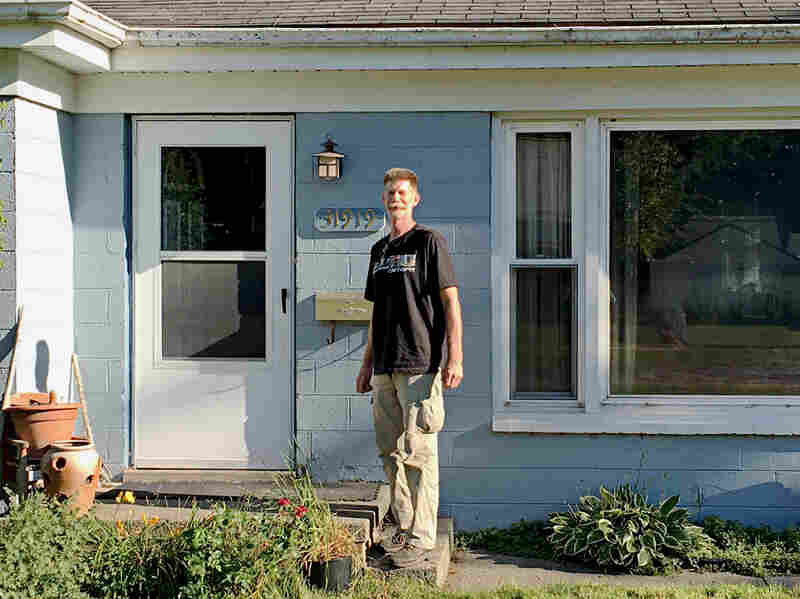 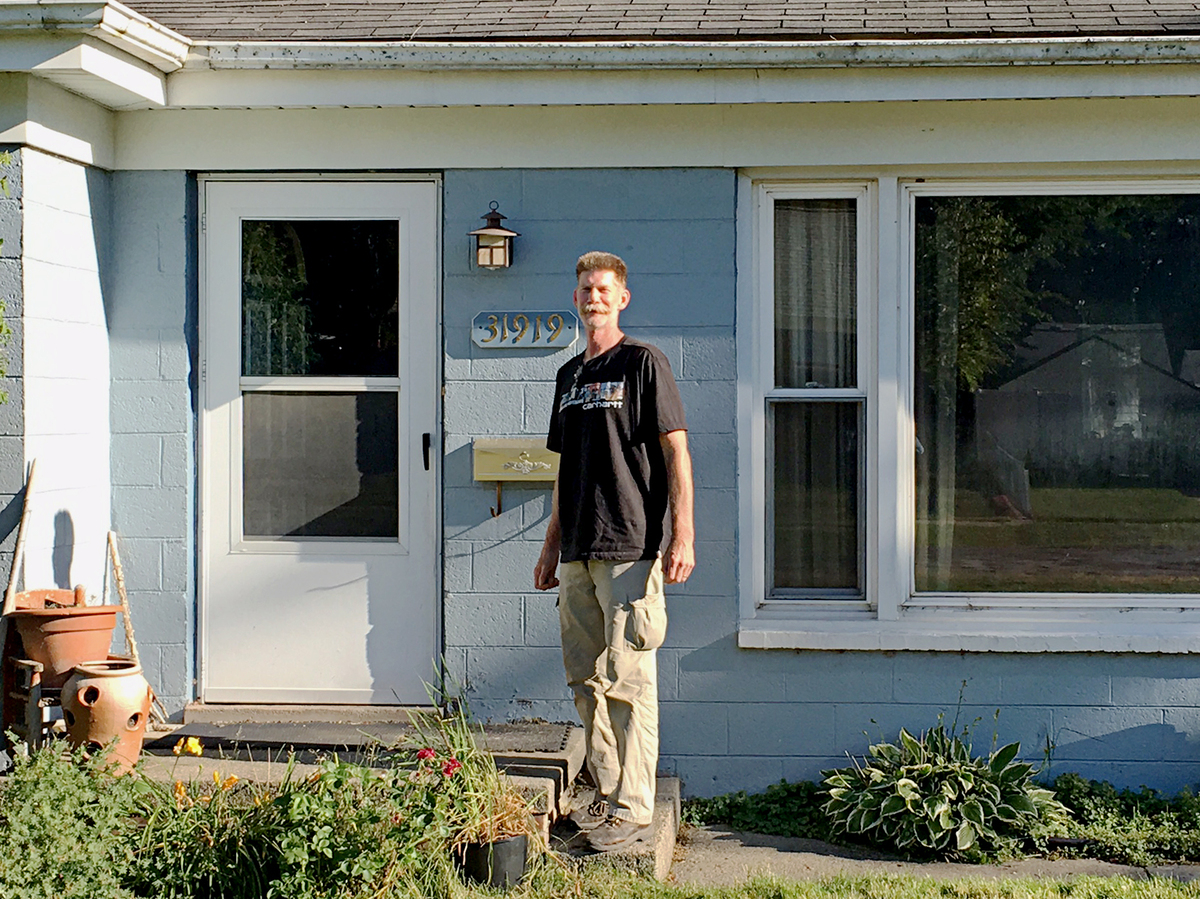 McCool is 54, a union carpenter.

"My neighbor on one side, he's a UAW worker," he told me. "The neighbor over, here's a Teamster. You know, so it's basically auto industry and basically good union people."

When the financial crisis hit here, these small single-family homes took a big hit, he says, losing more than half their value just like that.

"Everybody was upside down. I mean, it was terrible, because to go to work and see somebody's stuff sitting on their front lawn," McCool said. "I remember one of the first ones I've seen. And I stopped on the side of the road. And the wind was blowing stuff around, and I asked the woman if she needed help. You know, she was being evicted, and you could tell all hope was lost."

The area's coming back, he says, but slowly. McCool is voting for Hillary Clinton after being a Bernie Sanders supporter in the primaries. He says Trump is all ego.

"Here comes Caesar and boom, boom, boom," he said. "You know, he's got his whole family with him and we're going to do this. And, I mean, we're not the Roman Empire where we're going to walk in and take things."

McCool's support of Clinton puts him in line with his union and with the national AFL-CIO. But it's not hard to find dissenting opinions among the rank and file here. Take 44-year-old Jim Bell:

Bell works in nearby Dearborn. He's a Ford employee represented by the United Auto Workers Union. Politically, he says he's an independent.

"I'm undecided. However, I lean more towards Trump just because I think the change that Obama wanted to bring — I think Trump will," he said.

Bell does like what the billionaire candidate says about trade, including that American factories will come roaring back and that auto jobs will return from Mexico. But Trump has also said UAW members make too much money. Bell doesn't like that, nor does he like that so many Trump-branded products, like Trump ties and shirts, are manufactured overseas.

"Make America great again, but he's contradicting exactly his theme song for this campaign by buying everything over in China," Bell said. "However, that is still better than shady Hillary."

Bell's coworker, Kevin Eisbrenner, has been a Trump backer from the beginning. Both he and Bell say they do wish Trump would tone down the insults, but they like that he's not politically correct.

"I'm voting for the man, but do I think he's qualified as a politician? No," Eisbrenner told me.

But, he says, there is one thing Trump does have going for him: "He's a leader. And every good leader knows how to surround themselves with qualified people."

Now to a coffee shop in Novi — in northwest suburban Detroit. Scott Klein, 55, is a long-haul truck driver and former Sanders supporter. He is also undecided, but he does not like Trump, which sets him apart from most of the other drivers he talks to.

So he sits there. And the guys on the stools next to him ...

"Trump. Trump, Trump, Trump, Trump," Klein said, "All of them. I don't understand it. But I do, in a way. What's happening out in Washington now isn't working today. The vehicle for blowing the system up is Mr. Trump."

Make America great again, but he's contradicting exactly his theme song for this campaign by buying everything over in China... that is still better than shady Hillary.

Klein says he's interested in Libertarian candidate Gary Johnson. He says it's all frustrating, though, because it shouldn't be that hard to get some basic things done in Washington. I asked what would make a difference in his life.

"I would like a life where every week... we make enough that the bills are paid and I can put some money away for retirement," he said, adding that he's not doing that now.

In Monroe County, south of Detroit, the Ford plant closed almost 10 years ago. Chuck Brooks, 39, worked there. He was able to transfer to another Detroit-area factory, but says there are still worries about more jobs going to Mexico. He says he tells fellow workers that Trump with his tough talk on trade is not the answer.

"You've got to be careful what you wish for because it could backfire," Brooks said.

Bernie Sanders won the Michigan Democratic primary with Brooks' support. Now he's for Clinton. He says Trump has no credibility on jobs and trade. But he points to another potent topic that Trump uses to lure union votes — guns.

Michigan as a state has gone Democratic in the last six presidential elections. Historically, union members tend to vote in line with the recommendation of their union leadership.

Donald Trump is hoping that changes this year. He at least has the ear of these voters in suburban Detroit.