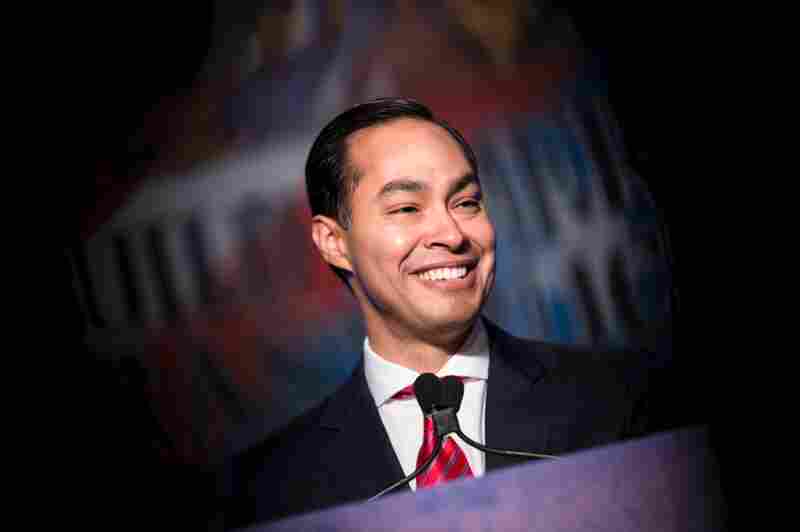 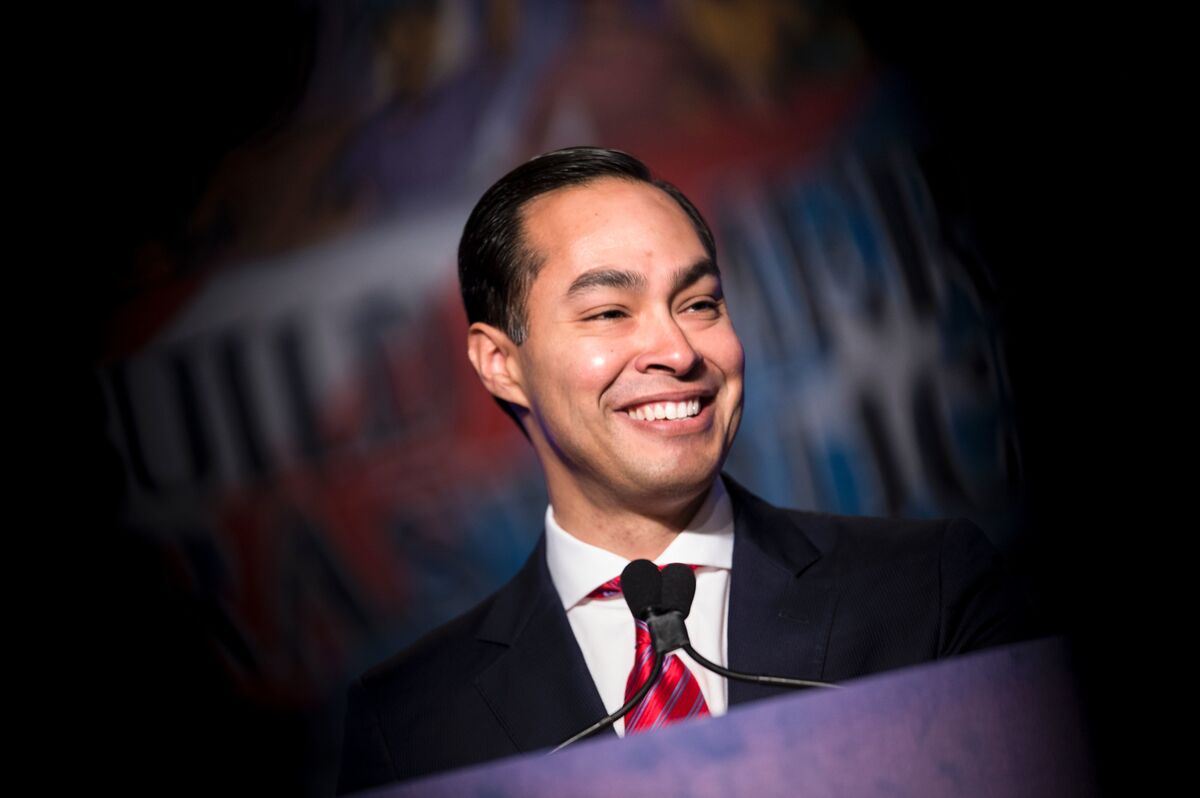 Julián Castro went from being the youngest member of San Antonio's city council, to mayor of San Antonio, to U.S. Secretary of Housing and Urban Development.

Castro may know a lot about urban development, but what does he know about Urban Dictionary? We'll ask him three questions about the infamous online slang glossary.

Click the Play link above to find out how he does.

And now the game where people who are seriously being considered to be Hillary Clinton's running mate show how they deal with tough questions.

SAGAL: We call it Not My Job.

SAGAL: Julian Castro was the youngest city council member in the history of San Antonio and then became the mayor of that fine city in Texas. He is now the secretary of Housing and Urban Development. Secretary Julian Castro, welcome to WAIT WAIT... DON'T TELL ME.

JULIAN CASTRO: Great to be with you.

SAGAL: So you're going to be the vice president, right?

CASTRO: (Laughter) I doubt it.

SAGAL: But you're not saying no definitely.

CASTRO: I do love my job.

SAGAL: There you are. Well, let's get to that, then. Can you tell me about the perks of being a cabinet secretary?

CASTRO: You get a security detail.

SAGAL: Oh, yeah. Do they taste your food for you?

CASTRO: (Laughter) They don't. I think - I guess they don't value my life enough.

BRIAN BABYLON: Hey, I have a question. Where are you on the pecking order if a disaster happens?

SAGAL: Oh, yeah. The line of succession. Do you know?

BABYLON: Yeah, the line of succession. Do you know where you are?

BABYLON: I would guess - yeah.

SAGAL: So what is it?

CASTRO: Except it's (laughter) Sally Jewell, who is the secretary of the Department of Interior, was born outside of the United States - I think in Canada - so I'm number 12.

SAGAL: There's only 11 people you have to surreptitiously assassinate. Good luck to you.

SAGAL: I want to talk about your background. One of the most - so you were born in San Antonio, right?

SAGAL: And was it not true that you were brought up in a pretty politically active family?

CASTRO: I was. My mother and father had been involved - they were never in politics. My mom ran for city council when she was 23, but she didn't win. But she was active in different women's issues and Hispanic issues down there in Texas.

SAGAL: We understood that she, during her period of political activism in San Antonio, took a really controversial stand which she was - that she was anti-Alamo.

CASTRO: Yeah (laughter). So a few years ago, when I was mayor of the city, The New York Times magazine came down, and the writer asked my mother about the Alamo. And she said that - well, she didn't say nice things about it, so you can imagine as her son...

SAGAL: What did she say?

CASTRO: Well, she said - she was trying to make a larger point that when she was young, growing up there as an Mexican-American, that, you know, they had kind of been taught the tale of the Alamo. And it made them feel kind of inferior.

SAGAL: And we point out that, like, the Alamo is about these Texas martyrs who died for freedom because they were killed by Mexicans.

SAGAL: Yeah, the Mexicans are the bad guys in the Alamo story.

CASTRO: That's true. So the next morning, after this magazine article comes out, the press - the local press - comes to me as the mayor of the city where the Alamo is the most visited site in all of San Antonio, Texas, to ask what I think of the Alamo.

SAGAL: And what did you say, sir?

CASTRO: Well, I think that was the first time I had to say that I had a different view than my mother.

SAGAL: All right. So that's what you said to the paper. What did you say to your mother...

SAGAL: ...The next time you had her in private?

CASTRO: I told her, you know, please pre-clear all interviews in the future.

BABYLON: You know what he said? He was like - Mom.

BABYLON: I have a question. I just be - I didn't know what you look like. I heard you're really handsome, so I look - Googled you up. And you're cute, so...

CASTRO: Thank you very much. I'll take the compliment.

BABYLON: Who does your eyebrows? Is there a guy?

BABYLON: Because they're robust. Is there a guy in the white - is there like a barber on...

CASTRO: Yeah, so my brother Joaquin and I are twins. I am one minute older.

SAGAL: You're one minute older. Do you ever lord it over him?

SAGAL: Now, you two are seemingly pretty close. You went to college together, law school together, and then you started your own law practice together?

CASTRO: That's right. I can't get rid of him.

SAGAL: Because he is a congressman, right? So he also went into politics.

CASTRO: (Laughter) No, no. I have no interest in going into Congress.

SAGAL: Well, Secretary Castro, we are delighted to talk to you. And we have invited you here today to play a game we're calling...

SAGAL: Oh, they've seen it, I think. You're the secretary of Housing and Urban Development, a title which we're sure has some disgusting meaning if you look it up in Urban Dictionary. We're going to ask you three questions about that well-known glossary of slang. If you get two right, you'll win our prize for one of our listeners, Carl Kasell's voice defining greatness on their voicemail. Bill, who is Secretary Castro playing for?

SAGAL: You ready to play?

SAGAL: That's a good attitude. First question - Urban Dictionary is a good source for insults you didn't know you needed. For example, what is the Urban Dictionary term for the habit of singing out loud in public while listening to music on headphones? Is it, A, a crappella...

CASTRO: I'm going to have to go with J-Lo-ing?

CASTRO: I'll go with that.

SAGAL: It was a crapella.

SAGAL: And I happen to have J-Lo right here, who would like a word with you.

SAGAL: It was - according to Urban Dictionary, the - when you sing out loud, listening on phones, you're singing a crapella. All right. You still have two more chances here, secretary.

SAGAL: Urban Dictionary has done a pretty good job of coming up with words we need, but don't have. In some cases, not describing odd sexual acts, such as, which of these, A, pregret, the feeling of regretting something you're about to do anyway...

SAGAL: ...B, null-flixing (ph) - that's spending two hours on Netflix unable to find anything to watch on Netflix.

SAGAL: You're right. It's pregret. It's an Urban Dictionary term.

SAGAL: Now, you have a chance to win with this last question, and it's a special one. In your honor, we went on to Urban Dictionary, and we looked up your name, Julian - or Julian. What, according to Urban Dictionary, does Julian mean? A, quote, "jewel-y-in' (ph) - walking around with your head hanging down because your neck is weighed down with too much jewelry." So...

SAGAL: He was just jewel-y-in' down the street. He couldn't see ahead of him. B, quote, "singing crazy high like Julie Andrews, as in, Sarah was Julie-in' (ph) in the shower this morning." Or C, quote, "the sexiest man on earth. In general, all Julians are unbelievably hot and sexy."

KLEIN: (Laughter) It's kind of true.

CASTRO: Thanks a lot.

KLEIN: It is true.

SAGAL: According to Urban Dictionary, a Julian is described as a sweet, intelligent guy, very honest and - I am paraphrasing a bit here - the most well-equipped man in any given room.

CASTRO: I'm just going to let that one go.

SAGAL: Bill, how did Secretary Castro do in our quiz?

SAGAL: There you are. Julian Castro is the United States secretary of Housing and Urban Development. Secretary Castro, thank you so much for joining us on WAIT WAIT... DON'T TELL ME.

CASTRO: Thanks a lot.

SAGAL: In just a minute, we help you keep cool in our Listener Limerick Challenge. Call 1-888-WAIT-WAIT to join us on the air. We'll be back in a minute with more of WAIT WAIT... DON'T TELL ME from NPR.