Accessibility links
Which Way Florida Goes Hinges On Puerto Rican Voters Winning Florida's electoral votes this November could come down to winning the favor of a newly potent bloc: Puerto Ricans in and around Orlando. 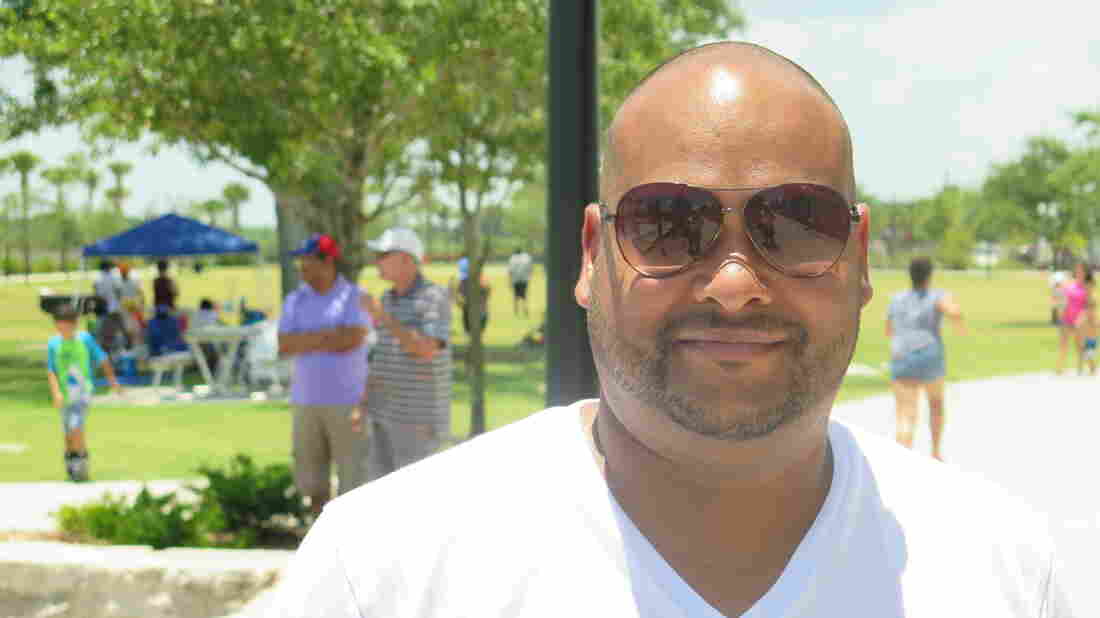 Jorge Maysonet moved to Florida from Puerto Rico more than a decade ago. He registered as an independent voter and says he is undecided on Trump or Clinton. Greg Allen/NPR hide caption 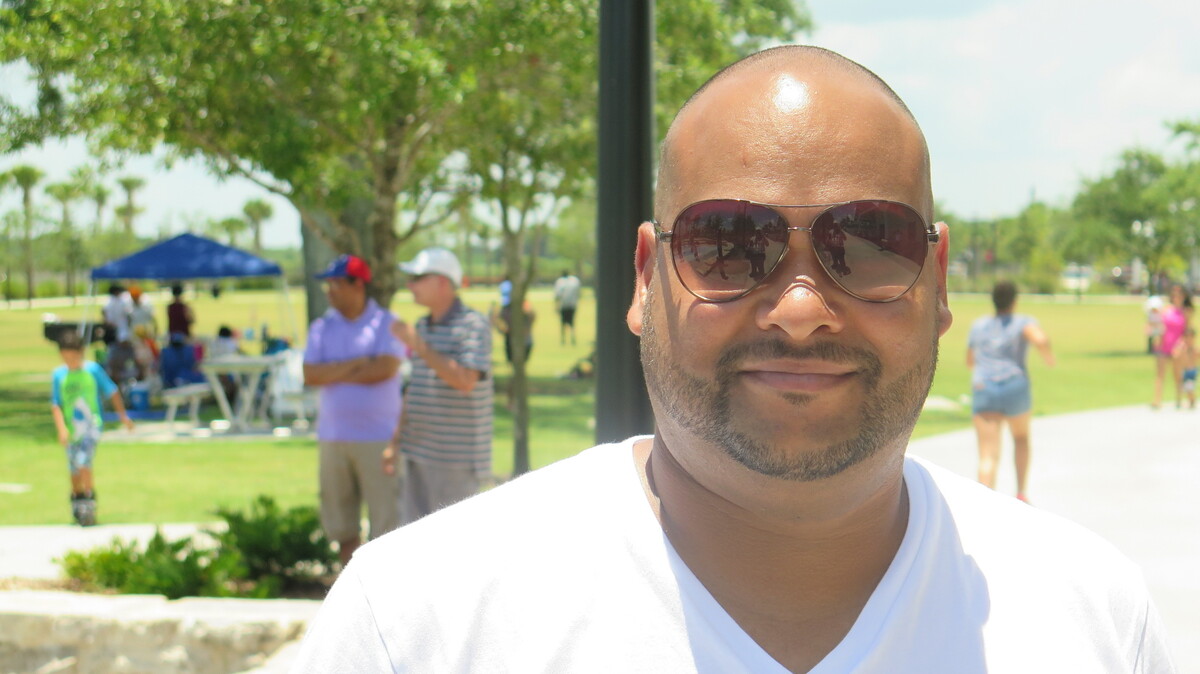 Jorge Maysonet moved to Florida from Puerto Rico more than a decade ago. He registered as an independent voter and says he is undecided on Trump or Clinton.

As part of the project A Nation Engaged, NPR and member stations are going to political battlegrounds to ask people in key populations what they want from this presidential election.

With a population of more than 20 million, Florida is the country's largest swing state. And its population is changing — thanks to Puerto Rico.

Puerto Rico's stagnant economy has brought tens of thousands of Puerto Ricans to Florida each year over the last decade. Large numbers have settled in the area near Orlando.

A popular gathering spot for Puerto Ricans and Latinos in Orlando is the café and lunch counter in Sedano's market.

"It's where you get retirees," says Jimmy Torres, who's been in Orlando for three years. "People like me." Torres still has one foot in Puerto Rico. His wife and two sons are there. Ask him what he's hoping for from this election, and he says jobs.

For those newly arrived from the island, he says, finding a good-paying job is perhaps the biggest challenge, even for teachers who arrive with a master's degree. He says Puerto Ricans' accents or English-language proficiency prevents them from landing full-time jobs.

"This year is one of the tests of how strong the Puerto Rican vote has gotten," says Esteban Garces, with the voter education group Mi Familia Vota. "Eventually, Puerto Ricans, if this trend continues, may outnumber the number of Cubans we have in this state."

But what's not clear is how many of these newly-arrived Puerto Ricans will vote this year — and for whom.

"I don't like any of the candidates that are running," says Edgar Colon. He's from Puerto Rico, and moved to Florida after serving with the Marines in Iraq and Afghanistan. Like about 23 percent of Florida voters, he's registered as an independent.

"I like to see all the options on the plate," Colon says. "I tend to look and find out who I think is the best candidate. I don't go to one party or the other one."

At Lakefront Park in the nearby city of Kissimmee, Jorge Maysonet was watching his daughter play in a kid's splash fountain. He moved here from Puerto Rico more than a decade ago and also decided to register with no party affiliation. He says it was a reaction against the political culture he grew up with in Puerto Rico. 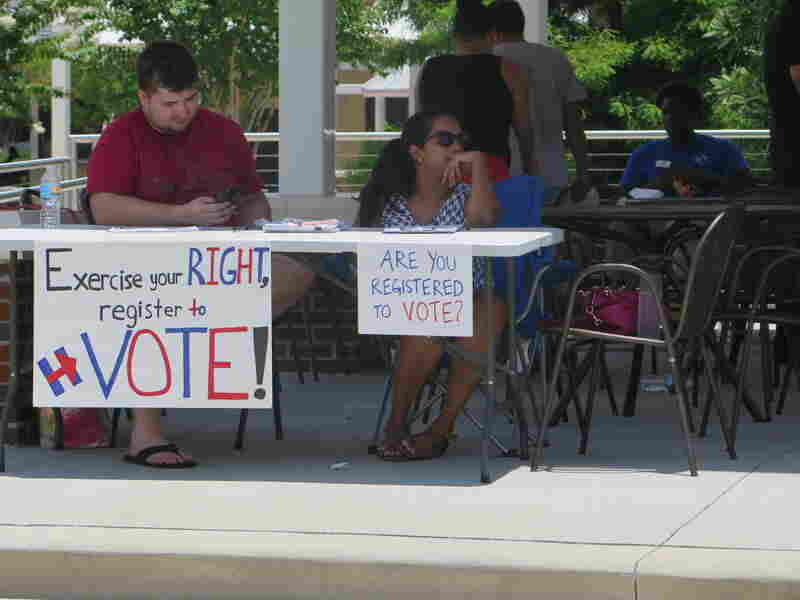 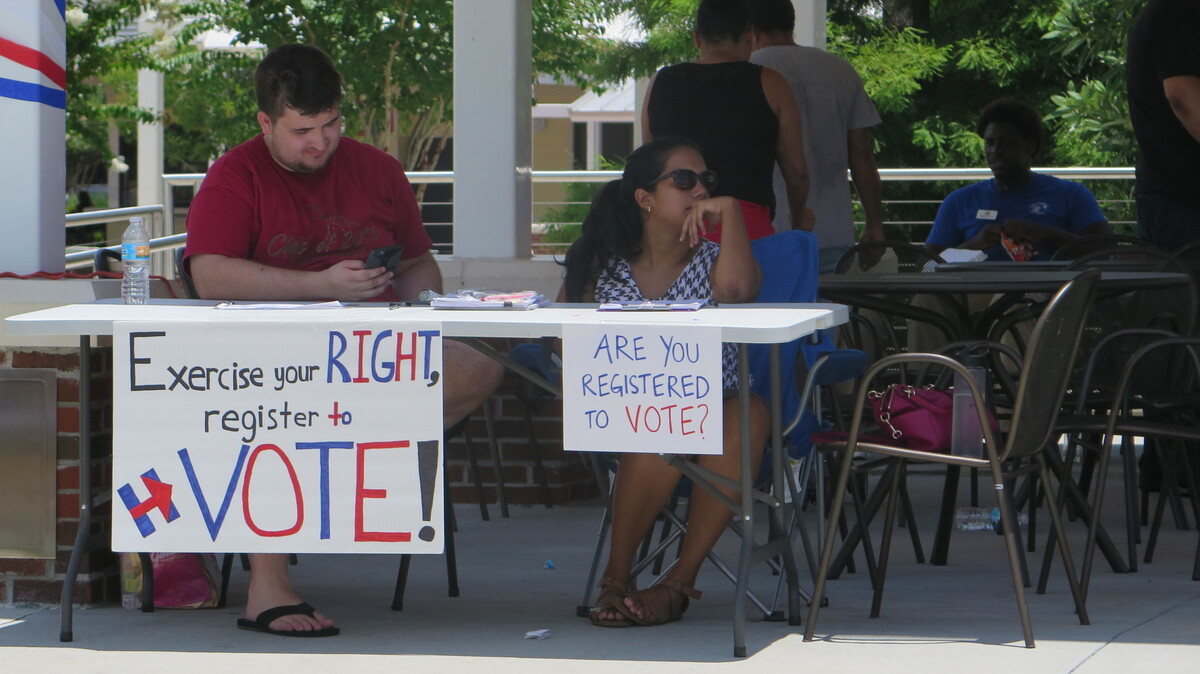 "In the island, the politicians are like a sport," he says. "You're rooting for the one your parents rooted [for]. I'm not like that. I choose the one that's best for me."

But most Puerto Ricans in Florida won't struggle with that choice, one Puerto Rican Republican says.

Anthony Suarez is a Republican and the head of Florida's Puerto Rican Bar Association. He believes that few Puerto Ricans will cast their votes for Trump. Although they're U.S. citizens, Suarez says many Puerto Ricans care deeply about immigration, and Trump's rhetoric on the issue sends a negative message.

At Lakefront Park in Kissimmee recently, Democratic candidates came out for a festival and mock election held by the Osceola County Hispanic caucus.

State Sen. Darren Soto represents the area in the legislature. He says Puerto Ricans have been a key swing vote in the state's most important swing region — central Florida's Interstate 4 corridor — since at least 2008.

"We helped put President Barack Obama on top and helped him win his re-election," Soto says. "At the end of the day, it's no secret that the candidate that wins the I-4 corridor, so goes Florida."

It's not just about the presidential election. The growing Puerto Rican presence in central Florida is changing local and state politics as well. Four years ago, Soto was the only Puerto Rican in the state House. Today, there are six. And Soto is one of two Puerto Rican legislators now running for Congress.