Accessibility links
Fears Of Violence At Cleveland Convention Stir Memories Of Chicago In 1968 The greatest damage to the city and the Democratic Party in 1968 came from the television images of the mayhem beamed 'round the world and seared into the memories of a generation of Americans. 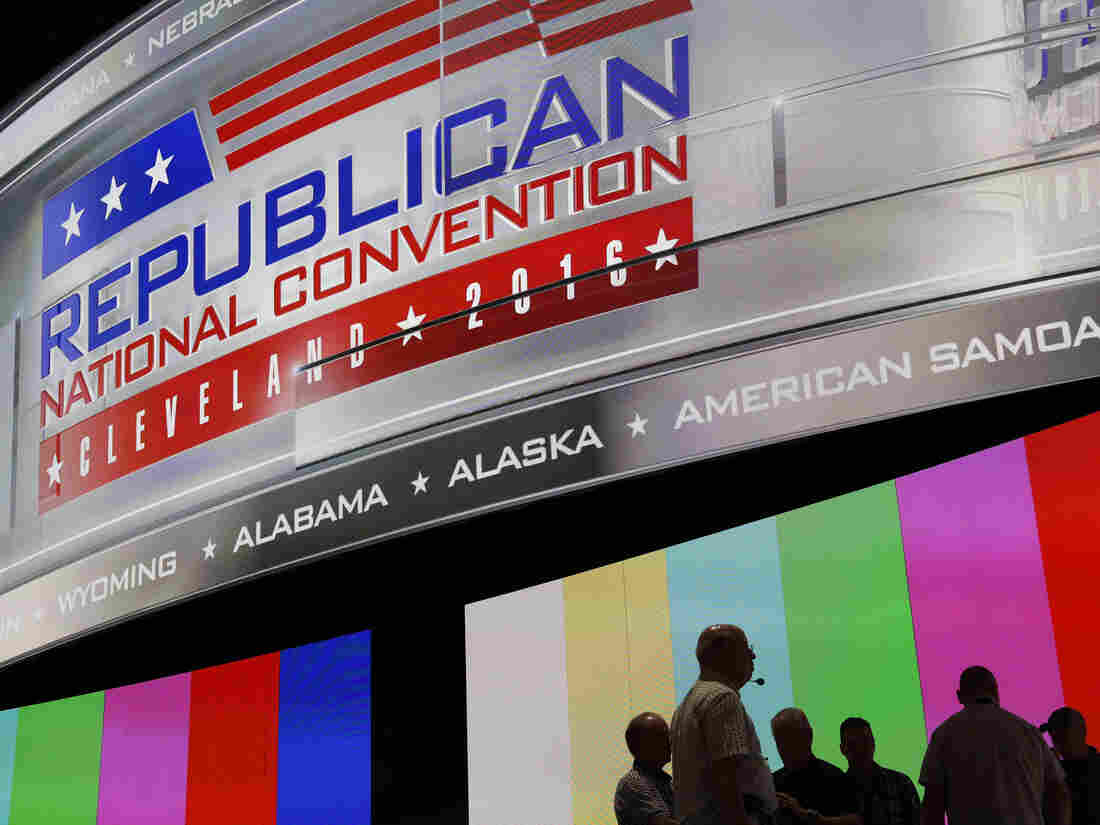 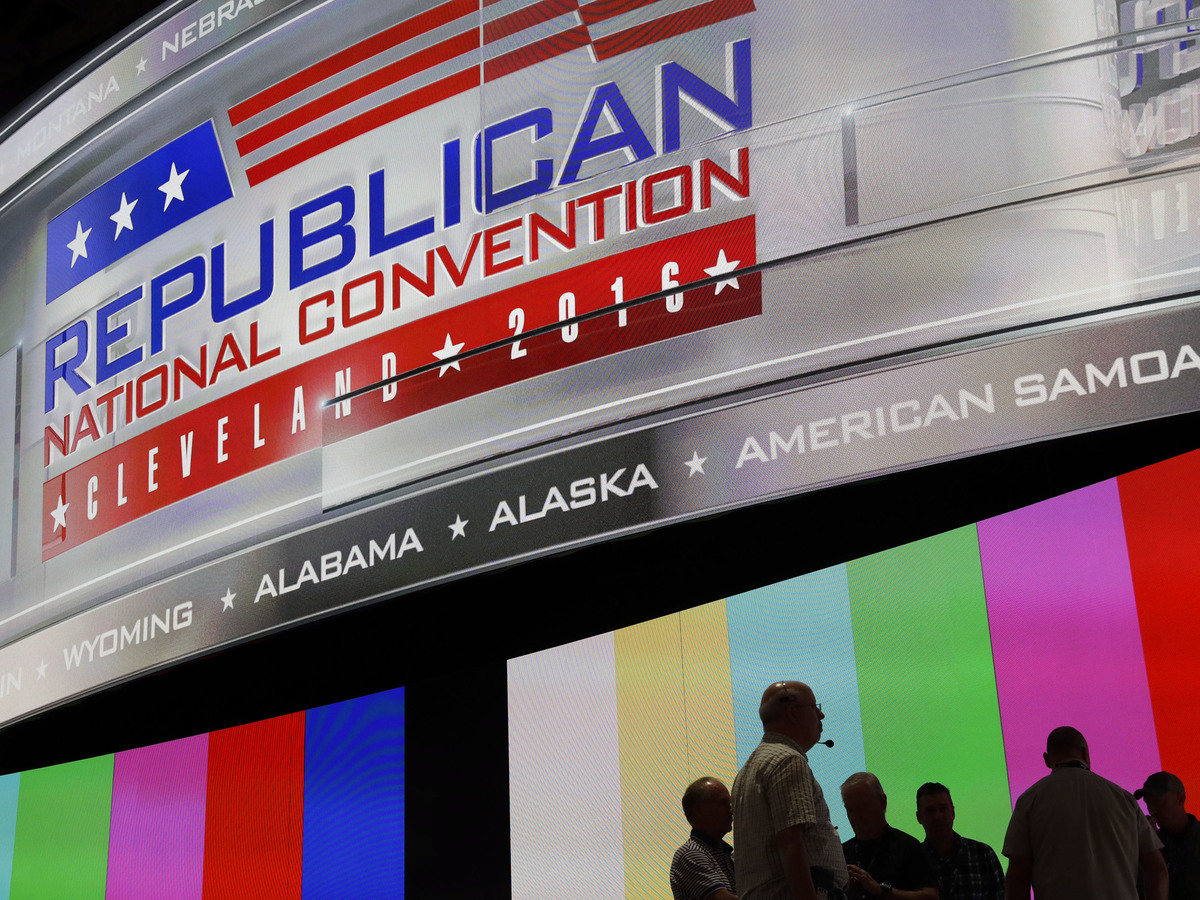 People gather onstage July 16 as preparations take place inside Quicken Loans Arena for the Republican National Convention in Cleveland. The convention is set to run July 18-21.

Recalling the Mayhem of '68 Convention

As the Republican National Convention arrives in Cleveland this weekend, the traditional mood of enthusiasm is mixed with anxiety — not about the party's presidential ticket, but about the threat of violent disruptions.

A survey of Republican activists in swing states by Politico this month found that nearly half expected there to be some kind of violence around their convention this year.

"It's really more a matter of how bad it will get," said one Iowa Republican.

Surely such talk was on the minds of at least two visitors in Cleveland in the past 48 hours. Joseph Clancy, the head of the Secret Service, and his boss, Jeh Johnson, secretary of homeland security, toured the convention site and surrounding areas and tried to offer assurances.

"We look at all the possibilities that are out there," said Clancy, "whether it's a sniper attack or whether it's a mass attack or large protests, small protests or even medical issues."

On Thursday night, the world witnessed yet another kind of deadly terrorist attack, this time a truck plowing through a crowd on a Mediterranean promenade.

The week before, a demonstration in Dallas occasioned the slaying of five police officers. In the past year, strikes by ISIS or its affiliated groups and individuals have claimed the lives of hundreds of unsuspecting civilians in Europe and the United States.

That's one reason security arrangements around the convention hall and its perimeter have reached record levels. Miles of tall, iron fencing have cordoned off blocks of downtown. Thousands of law enforcement officers and other security personnel are deployed nearly everywhere.

Area hospitals have canceled vacations for key personnel, scheduled extra staff and stockpiled emergency room supplies — preparing for everything from heat exhaustion to trauma wounds. The four largest hospitals have mapped out responsibilities for certain areas and kinds of care, working in cooperation with Johnson and Clancy's agencies and others as well.

Yet the threat of terrorism is only one reason this convention feels like a target. There is the specter of assassination that has loomed over American politics since the martyrdom of the first Republican president, Abraham Lincoln, in 1865. That is the chief reason the Secret Service is such a presence in Cleveland, as it has been at every national party convention for more than a century.

And there's another cloud that casts a shadow over the proceedings here this coming week. It forms from the many pronouncements from various activists and advocates who see this moment of national attention as an opportunity to air their grievances and make their mark.

Most of these groups and individuals are nonviolent. They are citizens seeking to be heard. Our democratic history has generally encouraged such expression, or at least tolerated it. But there have been exceptions, including some in the not-too-distant past.

There were 1,800 people caught up in mass arrests at the Republican National Convention in New York in 2004 and roughly 800 arrested at the GOP's 2008 gathering in St. Paul, Minn.

But the benchmark for disruptive protest has long been the 1968 Democratic gathering in Chicago. The party was in meltdown after incumbent President Lyndon Johnson announced he would not seek another term. A long primary season had not produced a clear-cut successor.

It was also a time of change, heightened awareness and emotional conflict in the country. American involvement in Vietnam was at its apogee. College students and other young men were resisting, or at least questioning, the draft.

Riots had scorched the inner cities of major metro areas after the assassination of Martin Luther King Jr. that April, following on equally destructive outbreaks of violence in the previous summer.

All of these factors combined to draw tens of thousands of young protesters to Chicago in the final week of August. They rallied in Grant Park and then spilled into the streets as it became clear that their favored anti-war candidates would not come close to winning the Democratic nomination.

Inside the hall, shouting and shoving matches became fistfights between delegates. Host city Mayor Richard Daley ordered a Chicago congressman to seize the gavel from the convention chairman and bring the proceedings to order. Daley also ordered thousands of police and Illinois National Guardsmen to clear the streets of demonstrators. They did so, but not before beating many with batons and using tear gas on many more. News people and medical personnel who witnessed the melee were also roughed up.

Sometimes called the "Battle of Michigan Avenue," these events were later labeled "a police riot" by an independent commission. But the greatest damage to the city and the Democratic Party came from the television images of the mayhem beamed 'round the world and seared into the memories of a generation of Americans.

So despite all the horrific events in other cities in recent months, it was still the legacy of Chicago 1968 that animated discussions of security here in Cleveland this month.

One Ohio Republican responding to the Politico survey said "far-left agitators in Cleveland will make the 1968 Democratic Convention in Chicago look like a fourth-grade slap-fight."

Setting such hyperbole aside, there are reasons for concern. In the aftermath of recent shootings by and of police officers, a number of grass-roots organizations have shown interest in demonstrating in Cleveland next week. Some are critical of policing methods in minority communities; others are supportive of police and all they do. There are other groups focused on the policies of the Republican Party, or more particularly on the positions and rhetoric of Donald Trump, the GOP's presumptive nominee.

Have the grievances and resentments of our own time reached such a pitch that major political events such as conventions must expected to be disrupted? Those who remember 1968 tend to think that no issue today affects so many people, or galvanizes as many into political action, as the Vietnam War did then. The draft laws of that time meant the war touched the vast majority of American families in a highly personal way. The war also exacerbated race relations, which were still raw from the deadly and destructive violence that flared across the mid-1960s.

Will Cleveland, the convention and the divisiveness of the Trump nomination be an equally toxic mix?

Some may say so, but others note that while the country today may be dyspeptic it is far from the turmoil of 1968, when political assassination claimed not only King but also Robert F. Kennedy, a sitting senator and leading presidential candidate.

It should be noted that organizers of the group Black Lives Matter, which has been at the forefront of protests against police violence, have not made the Cleveland convention a focus of their efforts. But that has not stopped others from doing so.

An added element of tension arises from the prospect that protesters and counterprotesters may be carrying firearms. Ohio has an open-carry law allowing lawful owners of firearms to show them in public. At least some gun clubs have encouraged their members to respond to any perceived threats to their rights, or to the convention, by showing up at protest sites with their weapons in plain sight.

Police have said that while firearms are banned from the convention site itself, they cannot prevent people from bringing their legal arms to the protest sites.

In Chicago, half a century ago, the protesters frightened many people with their numbers and emotional intensity. The police overreacted, using disproportionate force. But in all of that confrontation, no one was killed.

It is hard to imagine that this would be the case if protests in Cleveland become uncontrollable and firearms are involved.

As the convention is poised to begin, no one knows how much turmoil to expect. No one knows if any kind of violence will ensue. But merely asking such questions may be disturbing enough to keep some people away from downtown Cleveland this week.