Accessibility links
Vice Presidential Pick Mike Pence Is Donald Trump's Opposite In Style And Substance In choosing Pence, who addresses the Republican Convention on Wednesday, as his running mate, Donald Trump has reassured both establishment Republicans and social conservatives. 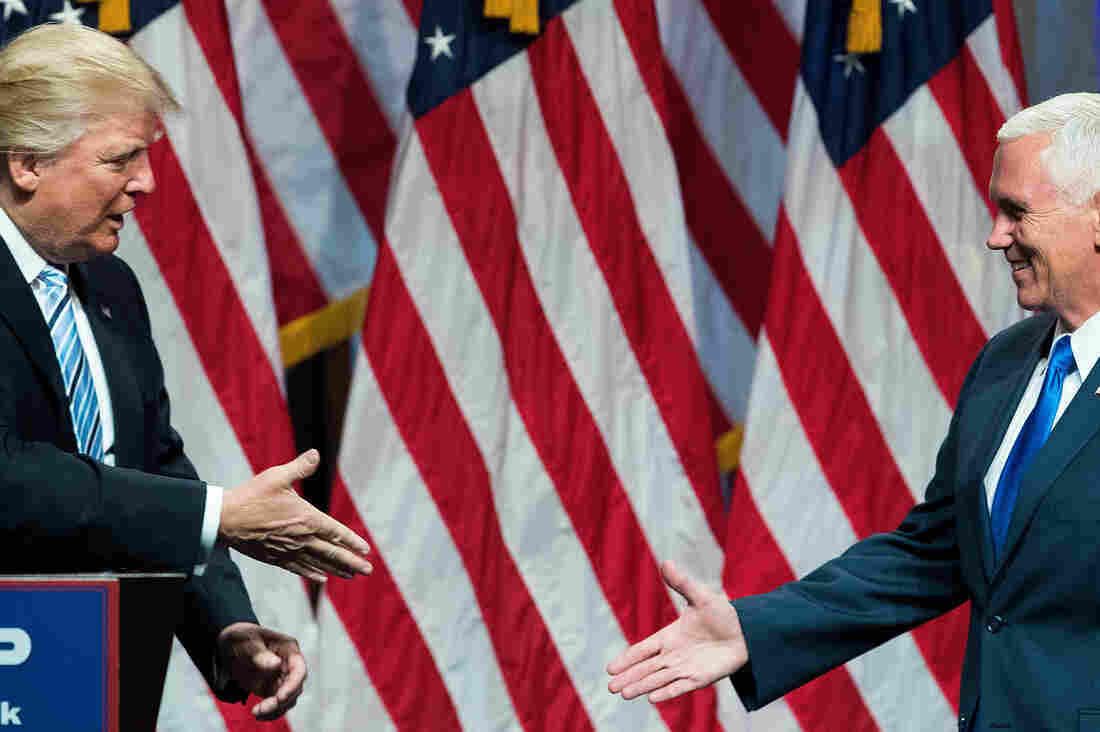 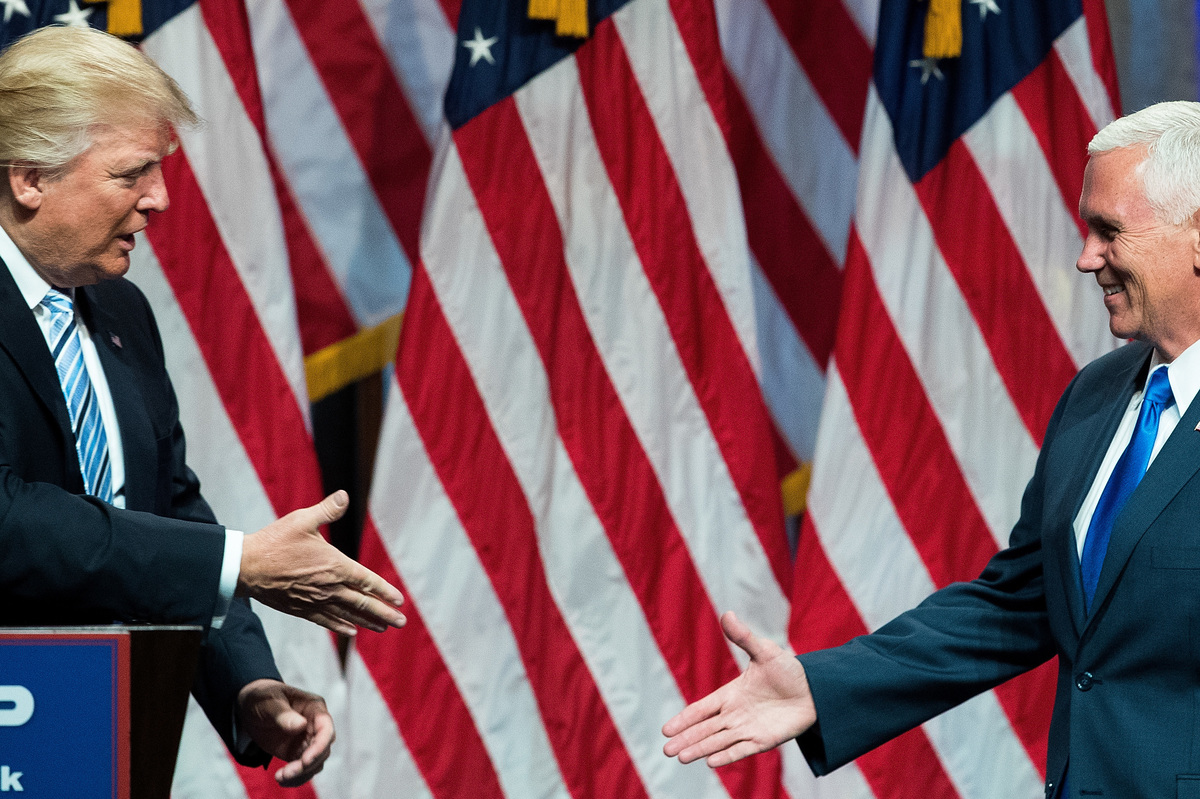 In choosing Indiana Gov. Mike Pence as his running mate, Donald Trump has reassured both establishment republicans and social conservatives — but he has also picked someone who in many ways is his polar opposite.

As a conservative talk show host in Indiana, Pence called himself "Rush Limbaugh on decaf."

The show followed two failed runs for Congress that landed Pence flat on his face. His second run in 1992 was even more disastrous than the first. He was soundly defeated after election records showed he used campaign funds to pay his mortgage, golf fees and other personal expenses.

The payments were not illegal at the time but would become so under rules changes that followed the disclosure. And he used such nasty attack ads against his opponent, Democrat Philip Sharp, that they "backfired," according to Sharp, giving the Democratic incumbent a much larger victory over his GOP opponent than in Pence's first run. 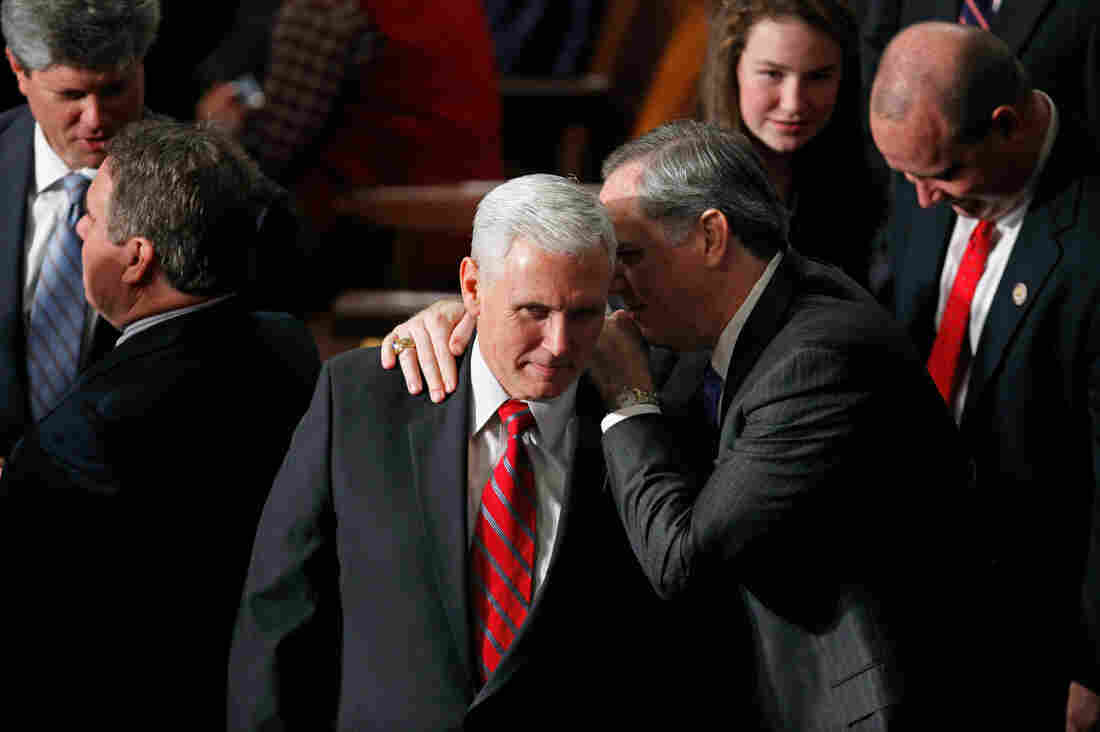 Pence talks with fellow Republicans during the first session of the 112th Congress in 2011. Chip Somodevilla/Getty Images hide caption

Pence later renounced his attack ads as "wrong" and swore off negative campaigning.

In 2000, he was finally elected to the U.S. House, where he served for 12 years, rising to the No. 3 Republican leadership position. And in 2012, he was elected governor of Indiana, succeeding the enormously popular Republican Gov. Mitch Daniels, known for balancing budgets and building a business-friendly environment.

Pence remained popular for his first couple of years as governor, but that would not last, according to Christine Matthews, a Republican pollster and president of Bellwether Research Group.

"Mike Pence is a polarizing figure in Indiana" now, she says.

At the beginning of his tenure, she observes, Pence, like Daniels, avoided social issues and focused on economic development, tax cuts and jobs.

But that all changed when he moved to emphasize a conservative social agenda— a failed attempt to ban gay marriage; an abortion law that it makes it illegal for a woman to have an abortion because of a fetal abnormality; and perhaps more important, he signed into law a provision that allowed businesses with religious objections to refuse services to LGBT customers. 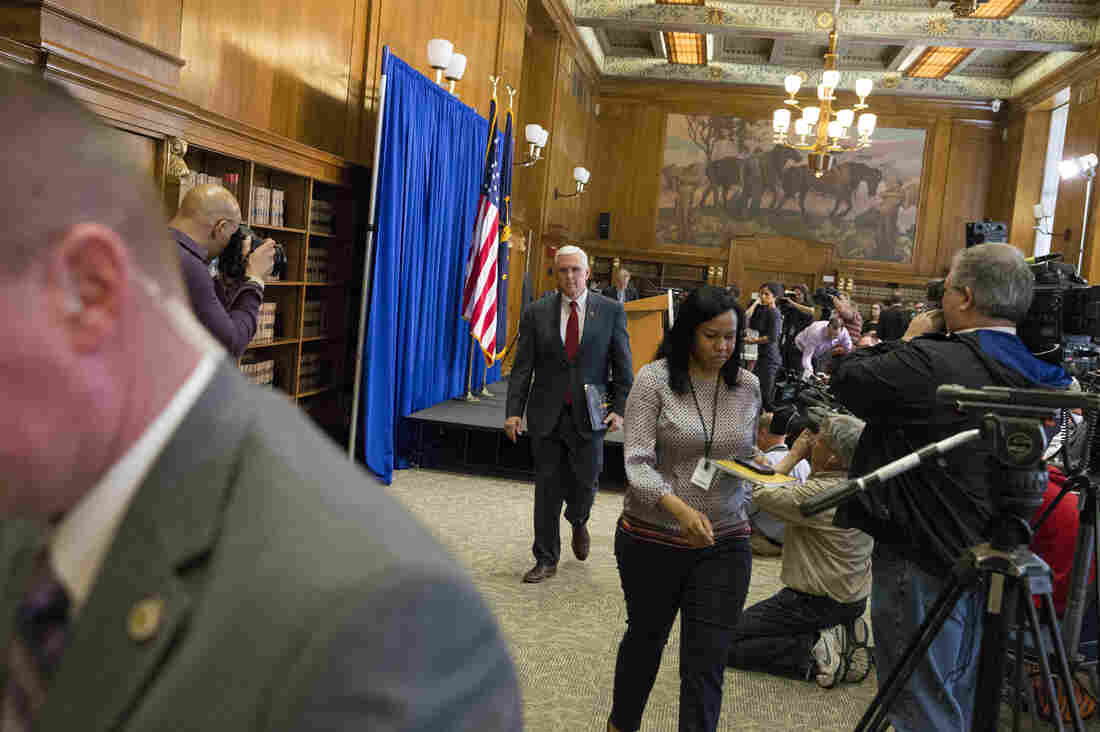 Pence leaves a press conference at the Indiana State Library in Indianapolis in 2015, where he spoke about the state's controversial Religious Freedom Restoration Act. Aaron P. Bernstein/Getty Images hide caption

The state Religious Freedom Restoration Act, as it is known, "turned off suburban and college-educated voters," says pollster Matthews, and sent the state's business leaders "through the roof." Among those business executives was Angie's List co-founder Bill Oesterle, a longtime Republican activist, who threatened to abandon a major expansion of his company in the state.

Pence "was clearly pandering to some extreme players in the party here in Indiana," Oesterle says, "and that was a sign to all of us that he was deviating from what he had told us he was going to do."

In the end, the economic pressure pushed the Indiana governor to "cave," Oesterle observes. Pence, after pledging not to change the law, signed a so-called "fix," a compromise to soften the legislation.

But the whole episode, topped off by his support for the abortion measure, which was denounced by a significant number of pro-life female Republican state legislators, had its effect. Until he was chosen for the No. 2 spot on the national ticket, polls showed Pence only an even bet for re-election.

Still, the 57-year-old Pence is, in many ways, the do-no-harm choice as Trump's running mate. He may not expand Trump's appeal outside the GOP base, but establishment Republicans are comfortable with him, and social conservatives seem to have forgiven him for the "fix."

"Nobody gets 100 percent, so he's batting ... maybe 85," says Curt Smith, president of the Indiana Family Institute and a delegate to the Republican National Convention. "That's a solid B-plus." Smith, who once was furious at Pence for abandoning social conservatives on "the fix," now predicts that Pence will be a great "partner" for Trump and not a "sycophant."

While Pence may seem boring next to Trump, he has important qualities that Trump does not have. 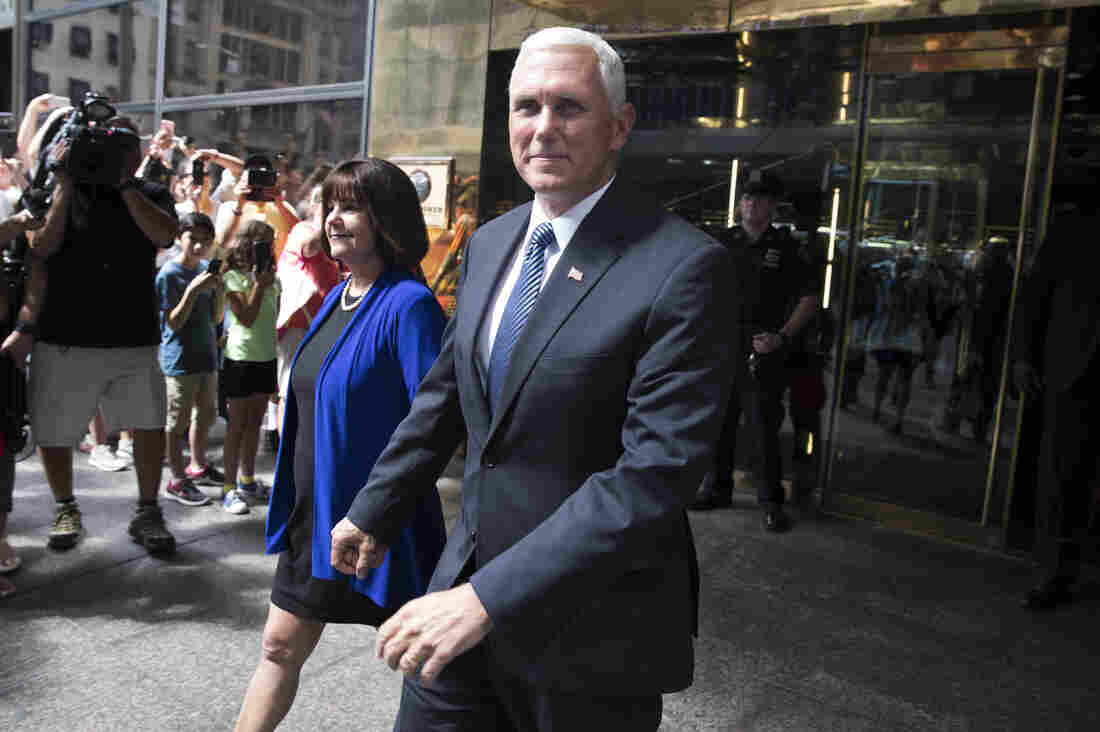 Pence and his wife, Karen, leave a meeting with Trump in New York on Friday. Evan Vucci/AP hide caption 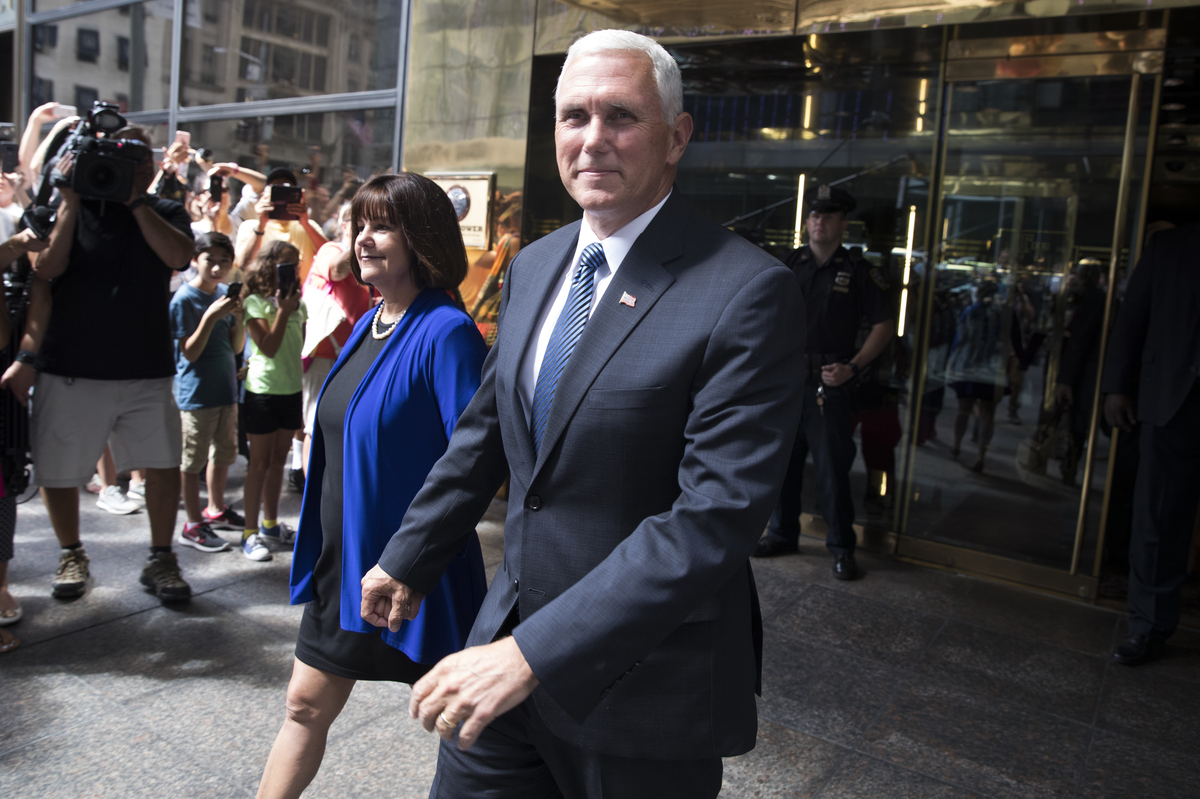 Pence and his wife, Karen, leave a meeting with Trump in New York on Friday.

"He balances Mr. Trump out in terms of personalities," says political science professor Andrew Downs, director of the Center for Indiana Politics at Indiana University-Purdue University in Fort Wayne. "He is Midwestern polite. He's also very good at staying on message."

Relentlessly good at staying on message.

To cite one example, when the state's controversial religious freedom law was enacted, Pence appeared on ABC's This Week. In the 12-minute interview, host George Stephanopoulos tried in vain 12 separate times to get an answer to various versions of this question: If a florist in Indiana refuses to provide flowers for a gay couple's wedding, is that legal under the state's new religious freedom law, yes or no?

Pence's replies were a demonstration in the fine art of giving a long response that doesn't answer the question.

What Did Mike Pence Do For Indiana Schools As Governor? Here's A Look

Pence may have to use that talent for evasion in the coming campaign. He has taken many positions, some reflected by his votes in Congress, that are dramatically different from Donald Trump's.

Pence has been a strong advocate of free trade, endorsing every trade agreement that's come before him, including the Trans-Pacific Partnership specifically opposed by Trump.

He has strongly opposed Trump's proposal to ban all Muslims from immigrating to the United States — Pence declared that the U.S. Constitution specifically protects people of all faiths. He grudgingly embraced Obamacare, taking the federal government's money for Medicaid expansion, but attaching more conservative strings to it. And unlike Trump, he supported the Iraq War.

The balancing act may prove tricky for this ticket, as illustrated when Lesley Stahl, interviewing Trump and Pence on 60 Minutes last Sunday, reminded Trump that his running mate had voted for the Iraq War.

"What do you mean you don't care?" Stahl asked.

"It's a long time ago, and he voted that way and they were also misled," Trump answered.

Stahl then reminded Trump that he had harped on this very vote as evidence of Hillary Clinton's bad judgment.

"He's entitled to make a mistake every once in a while," Trump replied, nudging Pence.

"But she's not?" Stahl followed up.

Through it all, Pence sat by, with a bemused smile on his face.