Accessibility links
At The Republican Convention Protesters Built A Wall To Protest Trump As Republicans made overtures to Latinos inside the convention hall, protesters outside denounced what they said was Donald Trump's racism. 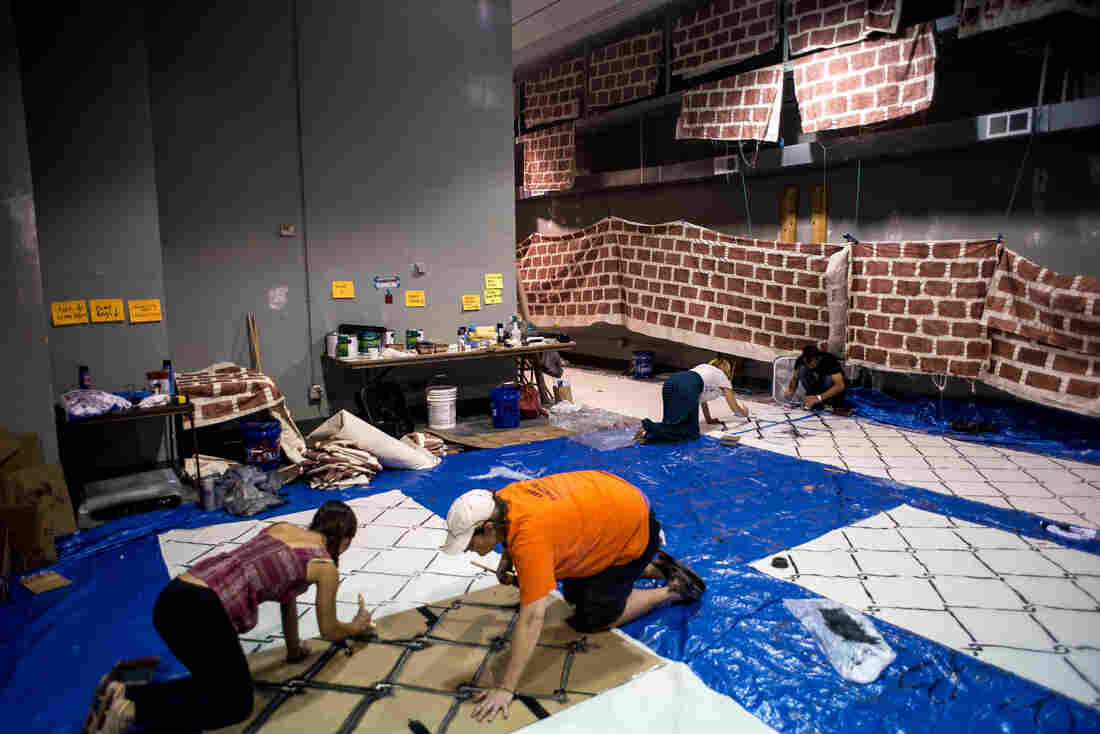 Volunteers with Mijente, a national "Latinx and Chicanx" organizing group, paint a "wall" ahead of Wednesday's "Wall Off Trump" protest. Mijente worked with several other organizations to orchestrate the protest, including the Georgia Latino Alliance for Human Rights, Ruckus Society and Other98. Gabriella Demczuk for NPR hide caption

They were gathered in a warehouse just outside downtown Cleveland.

Hundreds of feet of canvas was piled on the floor and some of it — painted to look like a brick wall — was hung from the ceiling for it to finish drying.

If Donald Trump wanted a wall, they were going to give him one — outside the Republican National Convention this week. Over the past few weeks, protesters crowdfunded $15,000 and they came up with a plan: They would build a symbolic wall around the Quicken Loans Arena to "wall off" Trump's "hate."

In some ways, this was a metaphor of Trump's strained relationship with the Latino community. Inside the arena, the campaign was making overtures to the Latino community by booking two of the country's three Latino senators and by giving a prime-time spot to a lesser-known Latino politician from Kentucky. But outside, to this crowd, that meant very little. 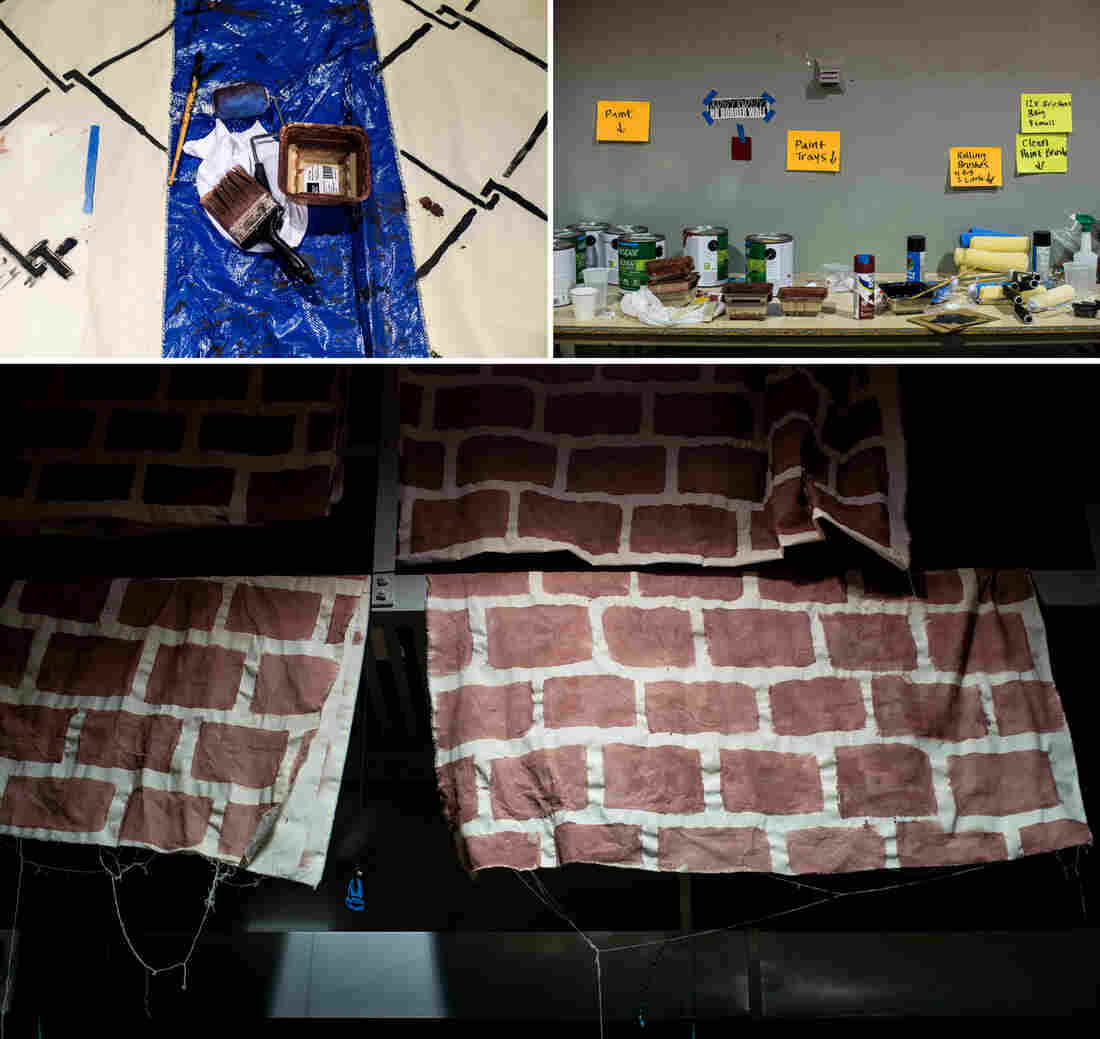 Paint supplies are laid out and completed panels are hung to dry as members from Mijente and other groups prepare for Wednesday's protest. Gabriella Demczuk for NPR hide caption

"I hope that [our demonstration] emboldens people a little bit," Marisa Franco, one of the organizers, said. "I think it's important for us to see examples of people standing up and resisting in the face of insult in the face of a candidate who is threatening to send us to the back of the bus, back into the kitchen, back into closet."

The plan they hatched was audacious: Political conventions are notoriously difficult places to demonstrate, especially if you plan to get right up to the security perimeter around the convention venue. That's in part why the city hasn't seen widespread protests so far this week.

Franco looked around the warehouse and she laughed nervously. She was thinking about everything going on in the country: Trump's harsh rhetoric toward Mexicans, the attacks against police officers in Baton Rouge and Dallas. 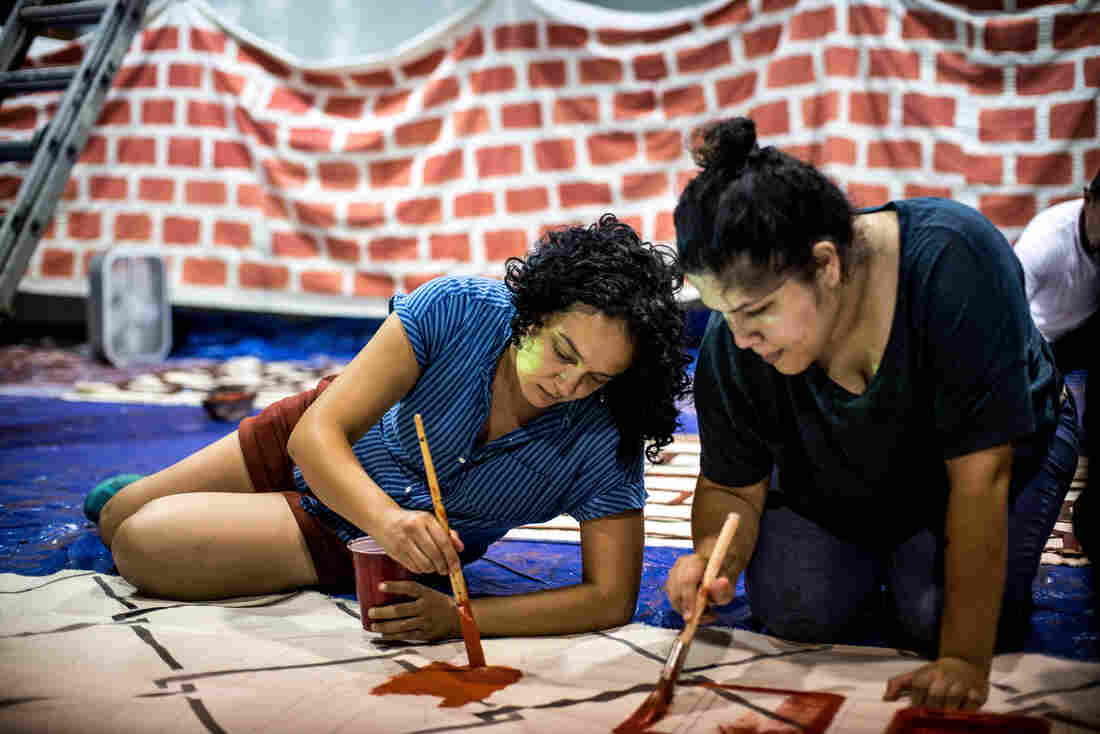 Marisa Franco (left), an organizer with Mijente, and another volunteer paint a portion of "wall" for the protest. Gabriella Demczuk for NPR hide caption

Do Hispanics believe what Trump believes?

It is no secret that Trump has a tough relationship with Latinos. 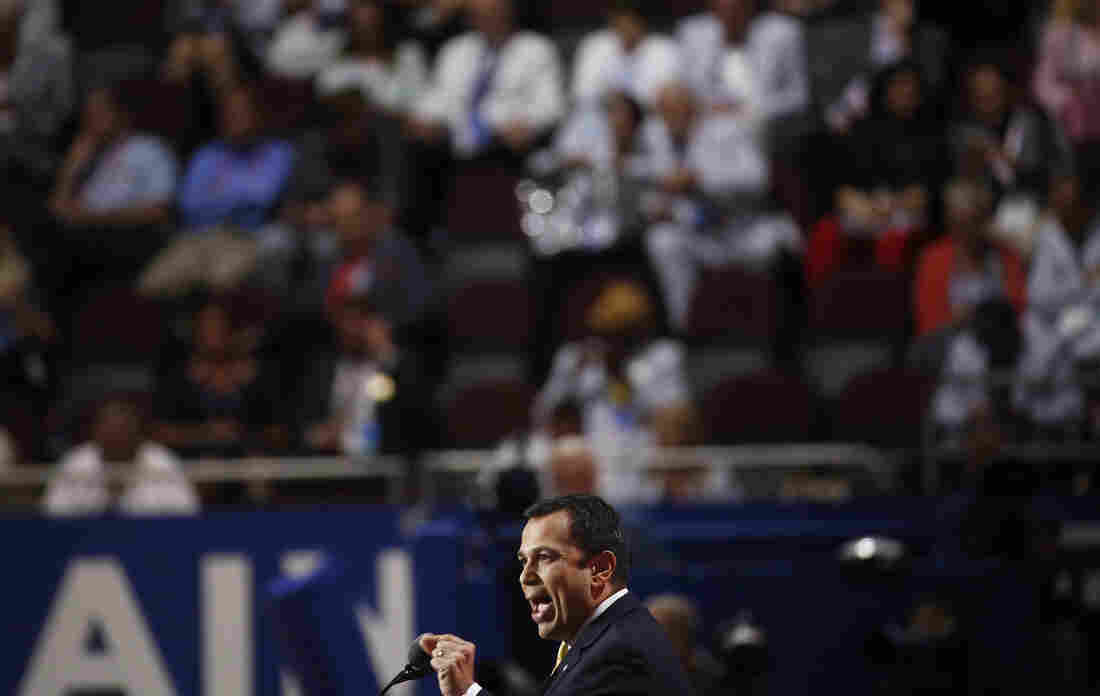 Still, on Wednesday, Trump had three Hispanic Republicans on stage: Sen. Marco Rubio, Sen. Ted Cruz and Ralph Alvarado, a little-known state senator from Kentucky, who was the only one to speak directly to Latinos.

"At their core, Hispanics believe what Republicans believe: traditional family values, church, faith in God, the dignity of work and the opportunity for self-sufficiency that comes from a free society and a limited government," Alvarado said. "They have simple dreams that might seem mundane to the average American, but would sound familiar to our founding fathers and their core principles."

In some ways, his speech was a throwback to the GOP of the early 2000s, when President George W. Bush tried hard to woo Latino voters making that same argument. One of the opening events of the 2000 Republican National Convention, for example, featured a Latino theme, where his Latino nephew — George P. Bush — introduced him.

In an interview with NPR, Alvarado said he was indeed bothered by how Trump dismissed a Latino federal judge overseeing a case against him. But, he said, he prefers someone "who's brutally honest to somebody who's dishonest."

In some ways, a conflict was evident in Alvarado's speech.

He highlighted the fact that his parents were "proud legal immigrants," and that the stories of hard-working "legal Latino immigrants" are perfectly aligned with Republican values.

But Alvarado also hammered President Obama for breaking his promise of "immigration reform." 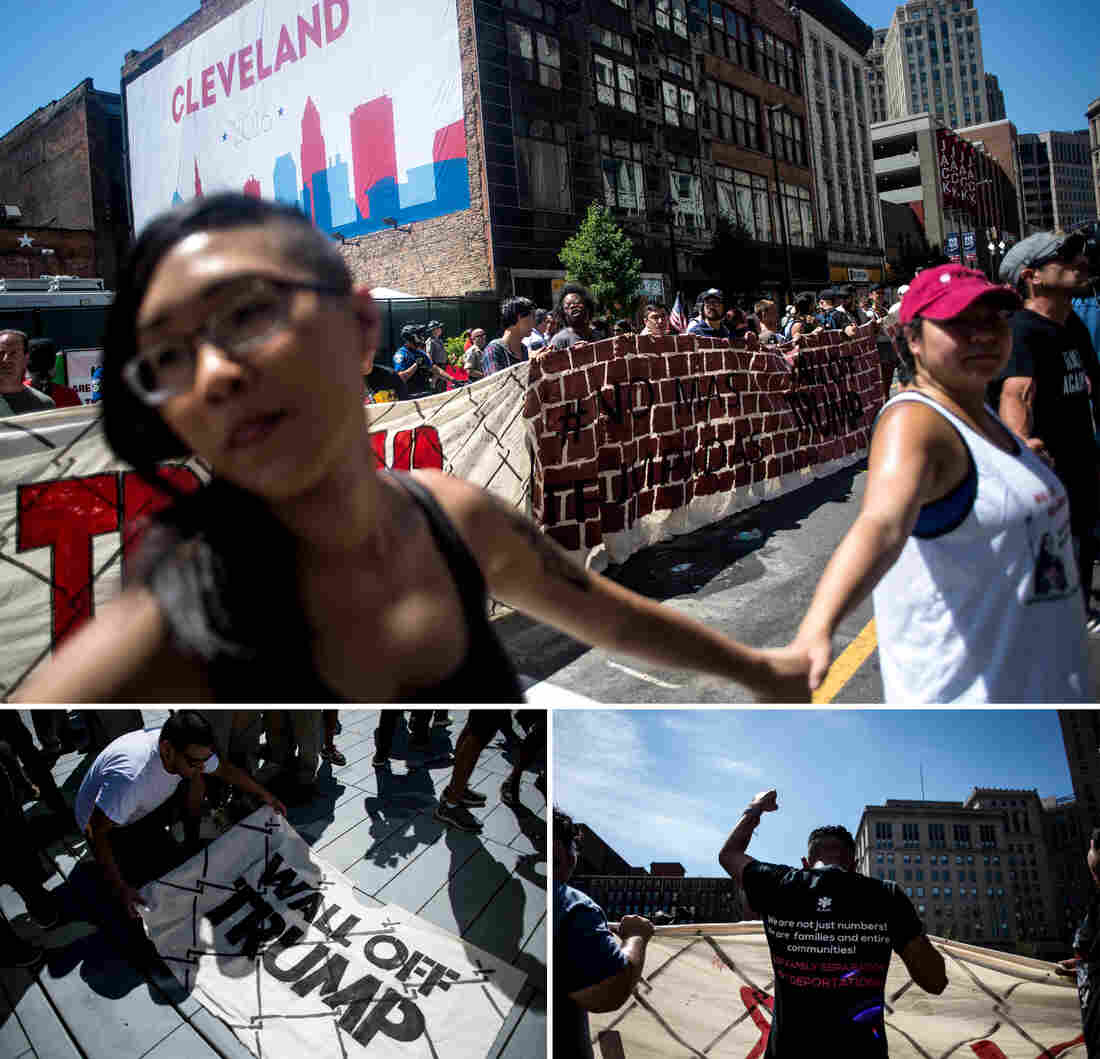 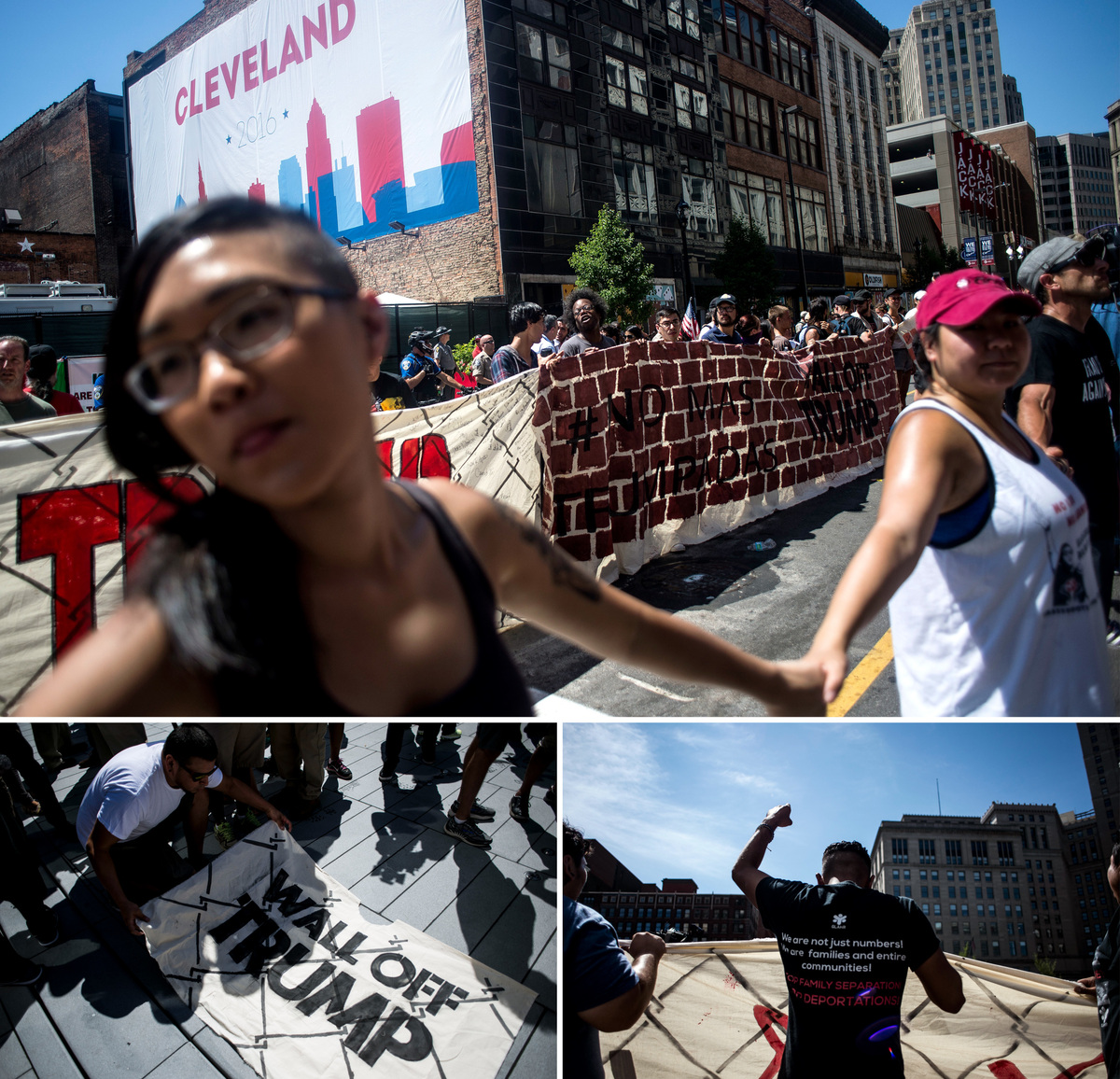 Organizers from Mijente, Georgia Latino Alliance for Human Rights, Ruckus Society and other activist organizations stage a protest and march outside Quicken Loans Arena in Cleveland.

Earlier on Wednesday, protesters met at Cleveland Public Square, a park in the middle of downtown that had been designated as the convention's protest zone.

Eva Cardenas, who helped organize the event, stood in front of a dozen or so protesters who had unfurled a long piece of canvas.

Quickly, the protesters began marching out of the park and onto the streets. They wove past police officers and pedestrians and past vendors with pins and T-shirts that exalted the need for a wall along the U.S./Mexico border.

Franco, the other organizer, said that Trump has insulted Mexicans from the moment he launched his campaign. Franco remembers that Trump called Mexican immigrants "rapists" and "criminals."

"It's felt very personal," Franco said. "And in addition to it being personal he's awakening something very ugly I think in this country." 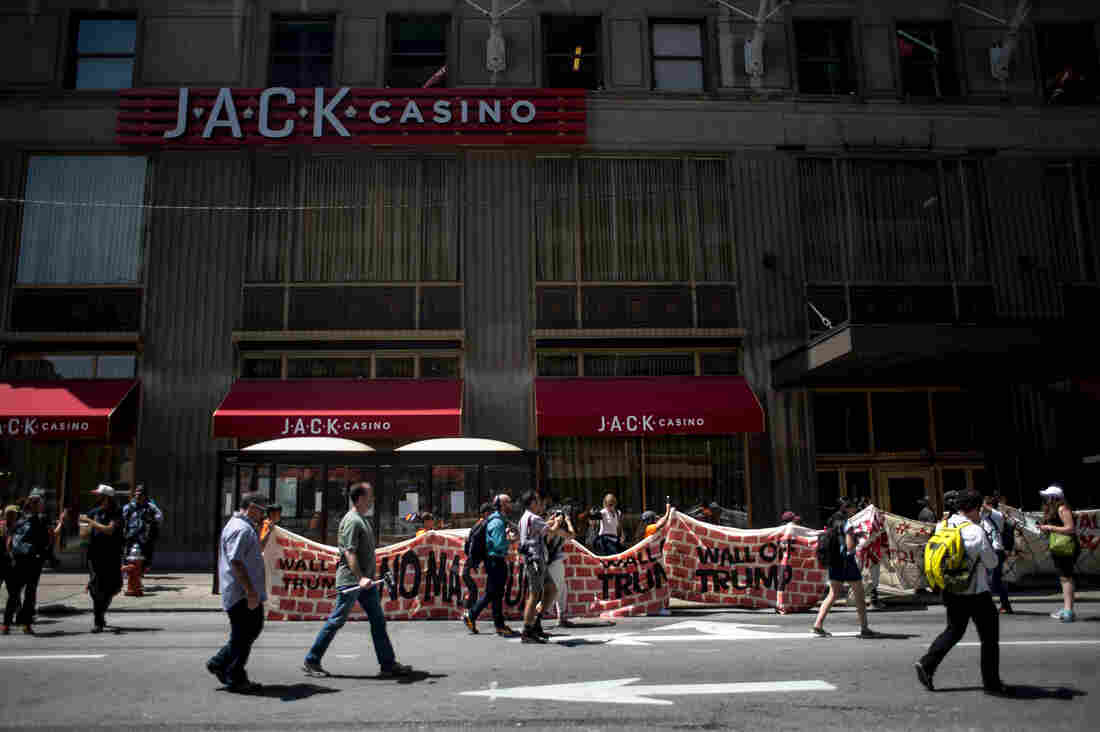 Protesters march with large sections of fabric painted to resemble a wall as part of the "Wall Off Trump" protest on Wednesday. Gabriella Demczuk for NPR hide caption

What was clear is that the view in this crowd was diametrically opposed to the view inside the convention hall.

Remy, an indigenous artist who goes by one name and who art directed the protest, said borders have no place in the long history of the Americas.

"If we had true history, we would know that there is no such thing as north and south of the border in terms of the people who were here," he said. "It was just our land. We took care of it; we respected it and we respected each other. We had our differences, but by no means did we ever have such contempt for each other."

The protesters made it all the way to the security perimeter around the arena. They stopped right in front of the 8-foot-tall fence protecting the site of the Republican National Convention.

They linked arms and unfurled the canvas. They chanted, "Trump equals hate; there is no debate."

And for a brief moment at least, they accomplished what they came to do: They built a symbolic wall between Trump and his rhetoric and the rest of the city. 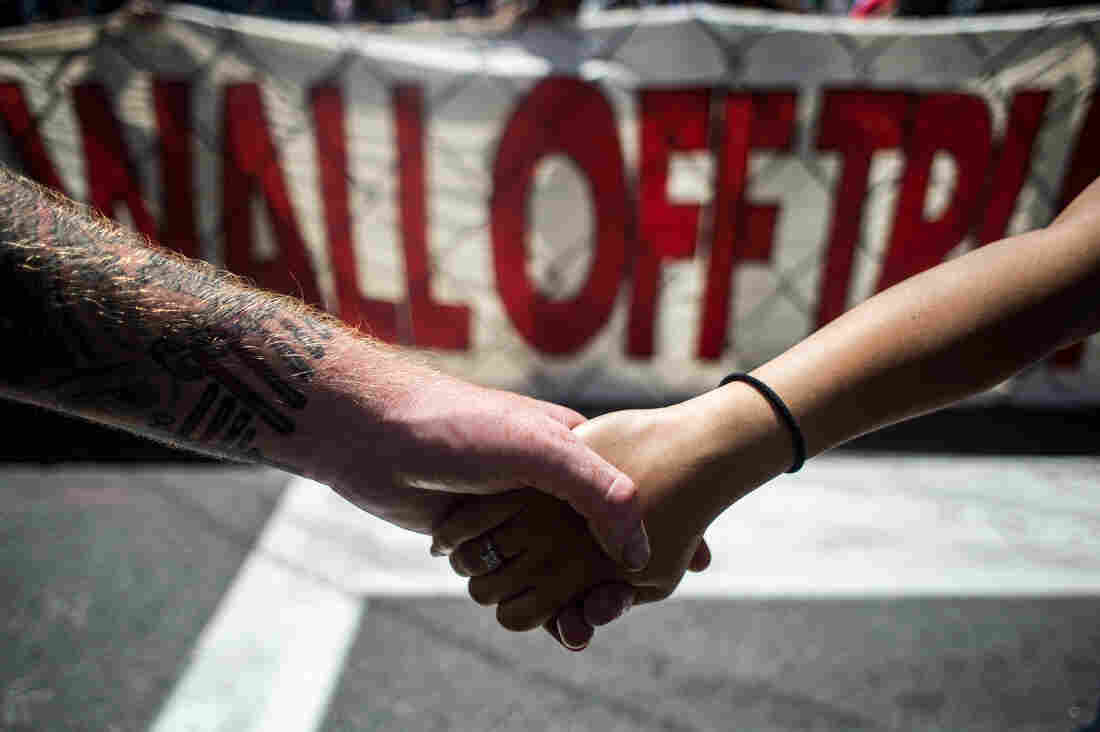