Accessibility links
A Culmination Of Donald Trump's Decades In The Limelight From his early days in real estate, Donald Trump has used his celebrity status to enhance his brand, including a 1990 Playboy cover appearance. Now, he's set to accept the GOP presidential nomination. 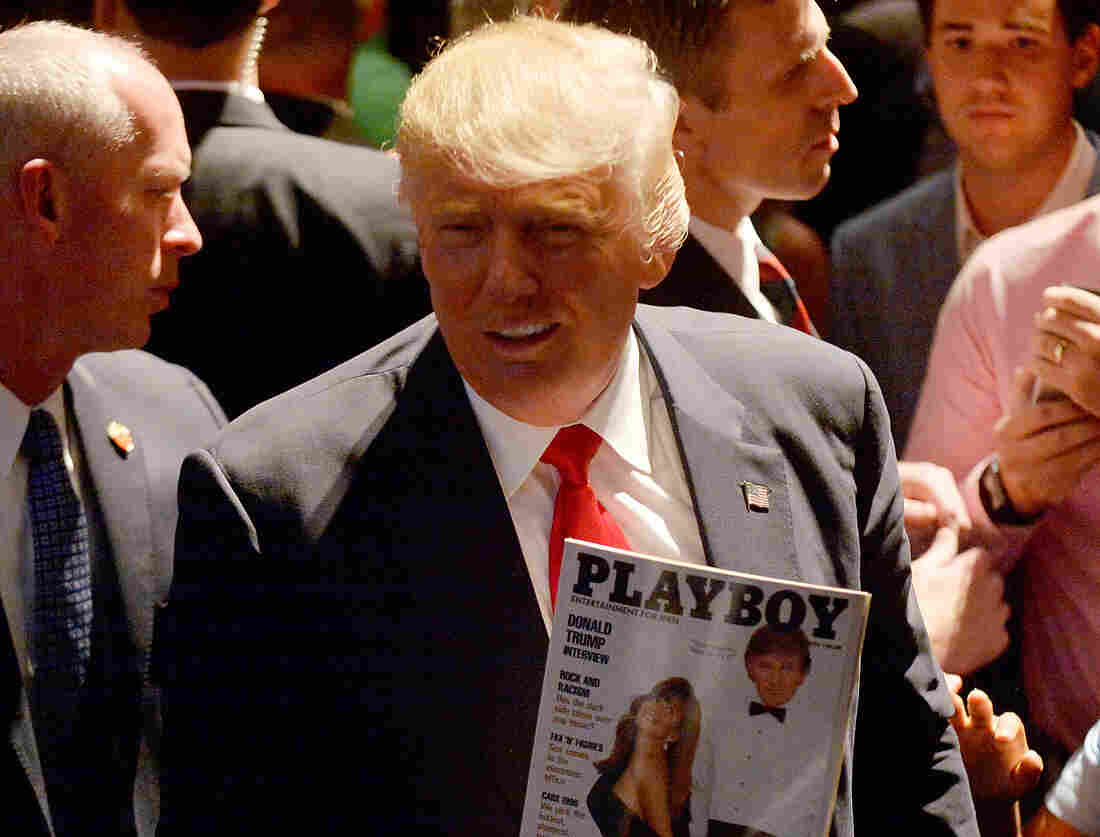 Republican presidential nominee Donald Trump shows a police officer his photo on the cover of a Playboymagazine during a campaign event at the Duke Energy Center for the Performing Arts on July 5 in Raleigh, N.C. Sara D. Davis/Getty Images hide caption 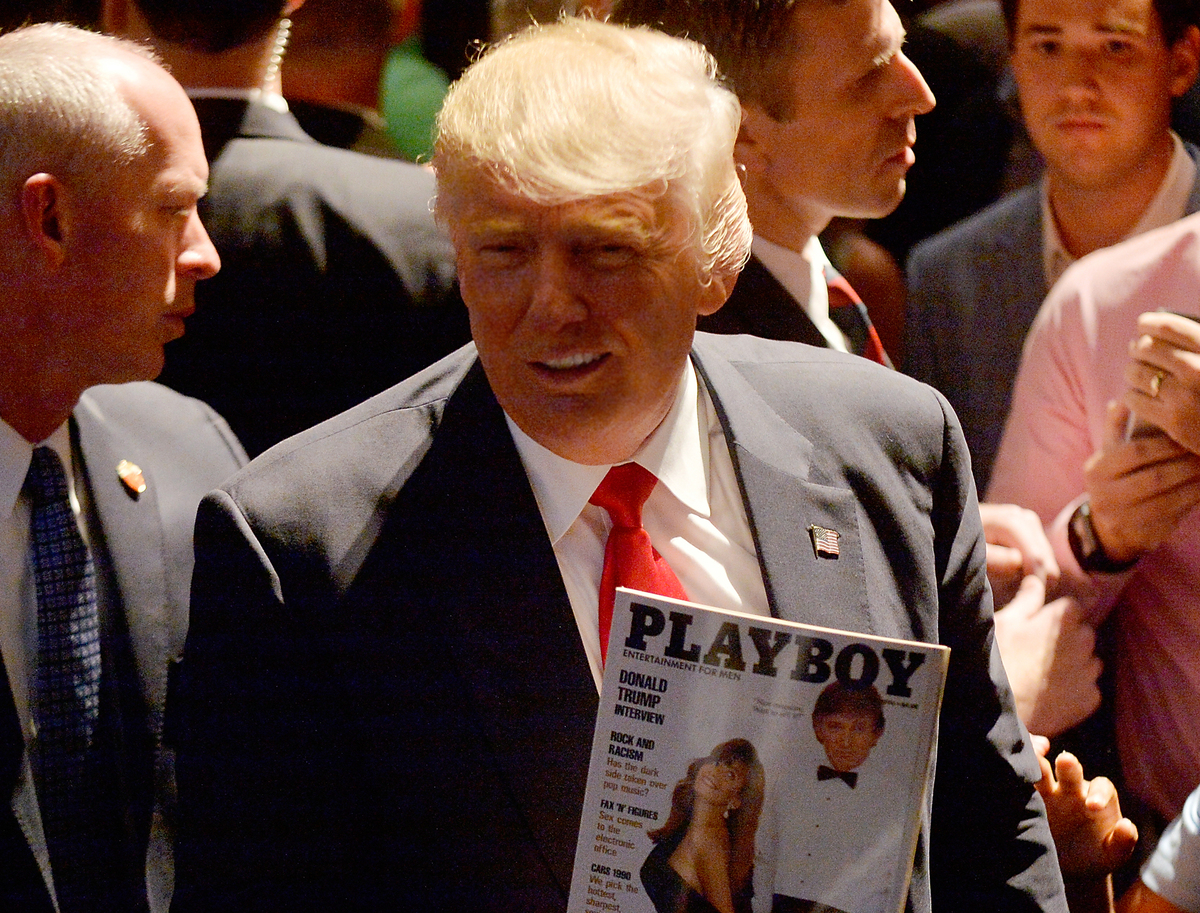 Republican presidential nominee Donald Trump shows a police officer his photo on the cover of a Playboymagazine during a campaign event at the Duke Energy Center for the Performing Arts on July 5 in Raleigh, N.C.

When Donald Trump takes the stage in Cleveland to accept the Republican nomination Thursday, it will be the culmination of decades in the limelight.

From his early days as a New York real estate developer to his entertainment career to his rise in politics, Trump has used his celebrity status to enhance his brand.

Writer Glenn Plaskin says he has seen this firsthand. He first met Donald Trump almost three decades ago, on the set of The Phil Donahue Show.

"Donald Trump was very approachable and he was backstage all alone. And I just walked up to him and introduced myself and asked him if he would do an interview," he says.

That interview for a New York Daily News cover story formed the basis of a relationship that led to Plaskin's profile, a little over a year later, of Trump in the March 1990 issue of Playboy. Trump appears on the cover in a white shirt and tuxedo pants — with an otherwise naked woman wrapped in his jacket.

Even then, Plaskin says, Trump understood the importance of being front and center.

"He knew that he wanted and needed his name in the newspapers," he says.

For decades, Trump has been known in New York for courting the press, says Paula Froelich. She's a former columnist for Page Six, the New York Post's gossip page.

"Here's this guy from a real estate family in Queens, right? And he wants to be part of the New York social scene, and he basically figured it out a long time before a lot of the other people did — 'You know what? Here are the press people who are going to write about me.' And he became very friendly with many, many press people across many, many organizations," Froelich says.

Trump and his then-wife Ivana cultivated an aura of celebrity — surrounding themselves with rich and famous friends. He bought up glitzy hotels, and a multimillion-dollar yacht. It all built up Trump's brand.

"Remember, this was the late '80s: It was a time of extreme excess and giddy materialism. You know, big hair and shoulder pads. And Donald and Ivana were kind of a golden couple," Plaskin says.

Plaskin spent hours over several weeks interviewing the real estate developer for the 1990 Playboy piece, at Trump Tower in New York, or aboard his helicopter. Plaskin says Trump enjoyed taking phone calls on speakerphone from his famous friends.

As much as the real estate developer benefited from the spotlight, he also craved it. Tony Schwartz, who ghost wrote Trump's famous 1987 book The Art of the Deal, remembers him as someone with an almost boundless "thirst for attention."

In an interview with NPR station WNYC, Schwartz says Trump's public and private lives were deeply intertwined. Schwartz also says he now regrets his involvement in the book and its role in Trump's rise to fame.

In that interview, Schwartz reads from a journal where he documented his experience of working with Trump:

"It's draining, it's deadening, it's one-dimensionalizing. It pulls me away from all that is best in life — complexity and subtlety and caring and nurturing — because all Trump is, is stomp, stomp, stomp. Recognition from outside, bigger, more, a whole series of things that go nowhere in particular — that are a black hole."

Schwartz says that, after he spoke out, Trump called him and accused him of disloyalty. But others, like Plaskin, remember Trump more fondly. Even as Plaskin was trying to win Trump over, Trump was also wooing him.

"At one point I said to him, 'Well, there must be a lot of women who are attracted to you, you're a good-looking guy.' And he looked at me, and he was just so fast and witty, and he said, 'Well, you oughta know,' " Plaskin says. "He was just extremely charming, very witty and very engaging. As you know, in any good interview there's a kind of friendship or seduction that happens in a way because you want to have the person open up — and Donald Trump was very good at that."

When Trump accepts the Republican presidential nomination, we'll see just how far that skill has gotten him.

In an earlier version of this story, Paula Froelich's last name was misspelled as Froehlich.