Accessibility links
'Art Of The Deal' Ghostwriter On Why Trump Should Not Be President Tony Schwartz spent 18 months working on Donald Trump's 1987 best-selling book. "I helped paint a vastly more appealing human being than he actually is," Schwartz says. 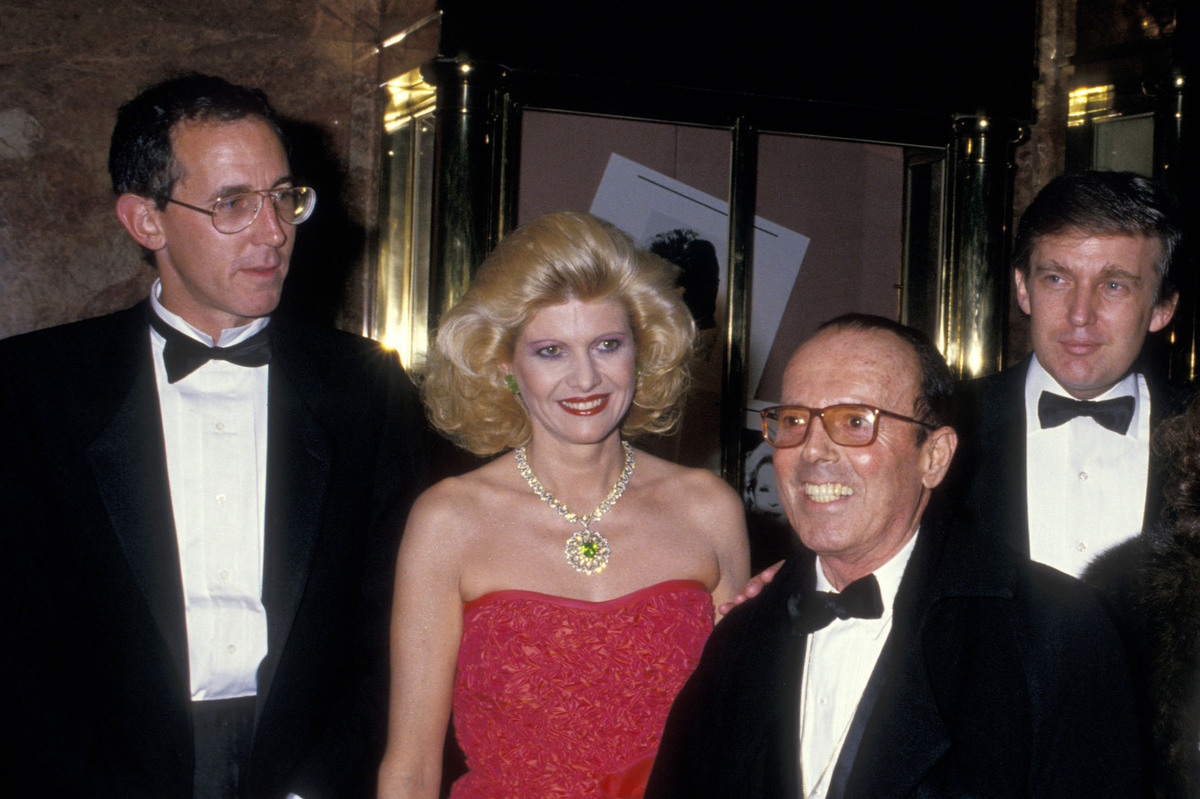 Tony Schwartz (from left), Ivana Trump, photographer Francesco Scavullo and Donald Trump celebrate the publication of Donald Trump's 1987 book, The Art of the Deal, which was ghostwritten by Schwartz.

In 1987, the book The Art of the Deal elevated Donald Trump from playboy developer to best-selling author.

From the opening paragraph of Trump's self-portrait as a shrewd and creative dealmaker:

"I don't do it for the money. I've got enough, much more than I'll ever need. I do it to do it. Deals are my art form. Other people paint beautifully on canvas or write wonderful poetry. I like making deals, preferably big deals. That's how I get my kicks."

Trump's name is on the cover of that book. But there's another one, too — beneath the portrait and the big golden letters spelling out TRUMP — the name of Tony Schwartz, the book's ghostwriter.

Schwartz did not weigh in on the presidential campaign until this week in a lengthy interview with The New Yorker.

Schwartz tells All Things Considered's Robert Siegel that he is speaking out now because he is extremely concerned about what Trump would be like as a president.

He says the portrait that he painted of Trump in The Art of the Deal is not accurate.

"I helped to paint Trump as a vastly more appealing human being than he actually is. And I have no pride about that. ... I did it for the money. It's certainly weighed on me over the years," Schwartz says. "Now, since he's ... in a position to potentially become president, it makes my decision back then look very different than it did at the time."

Donald Trump And The Art Of His Presidential Campaign

Donald Trump And The Art Of His Presidential Campaign

Schwartz spent 18 months on the book, including eight or nine months sitting in Trump's office virtually every morning to get the information he needed.

"One of the chief things I'm concerned about is the limits of his attention span, which are as severe as any person I think I've ever met," Schwartz says. "No matter what question I asked, he would become impatient with it pretty quickly, and literally, from the very first time I sat down to start interviewing him, after about 10 or 15 minutes, he said, 'You know, I don't really wanna talk about this stuff, I'm not interested in it, I mean it's over, it's the past, I'm done with it, what else have you got?' "

The idea of a president in an "incredibly complex and threatening world who can't pay attention is itself frightening," Schwartz says.

Add to that the fact that Trump is so easily provoked, that what Schwartz calls Trump's insecurity "makes him incredibly reactive whenever he feels threatened, which is very, very often."

As an example, Schwartz says, his interview in The New Yorker came out on Monday. On Tuesday, he received "a long and threatening letter from his lawyer designed, I think, to muzzle me."

"For 25 years, I think Trump has done a very, very effective job of muzzling anyone who has worked for him or with him by signing very, very strict nondisclosure agreements before they start working with him," Schwartz says. "It just turns out that I started with him so early that he hadn't thought of it yet."

"The reason I'm stepping up is because no one else seems to be free or willing to do so," Schwartz says. "Believe me, it is not fun."

Use the audio link above to hear the full conversation.