Accessibility links
Who is Tim Kaine? He Could Be Vice President Virginia Sen. Tim Kaine, Hillary Clinton's running mate, faces Donald Trump's running mate, Indiana Gov. Mike Pence, on the debate stage Tuesday. Here's what you should know about Kaine before then. 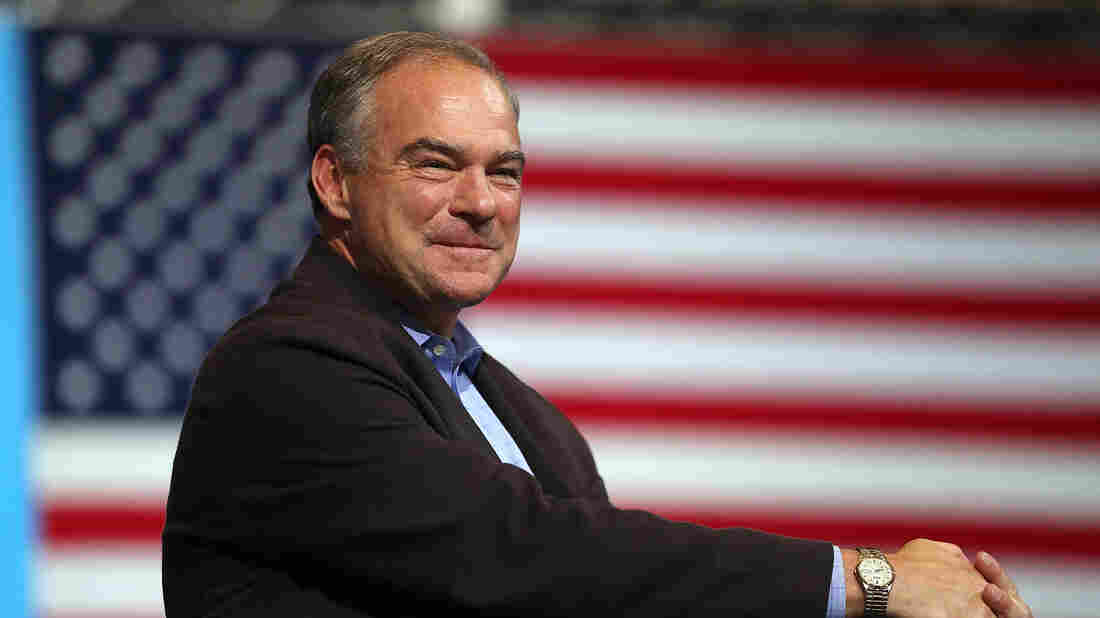 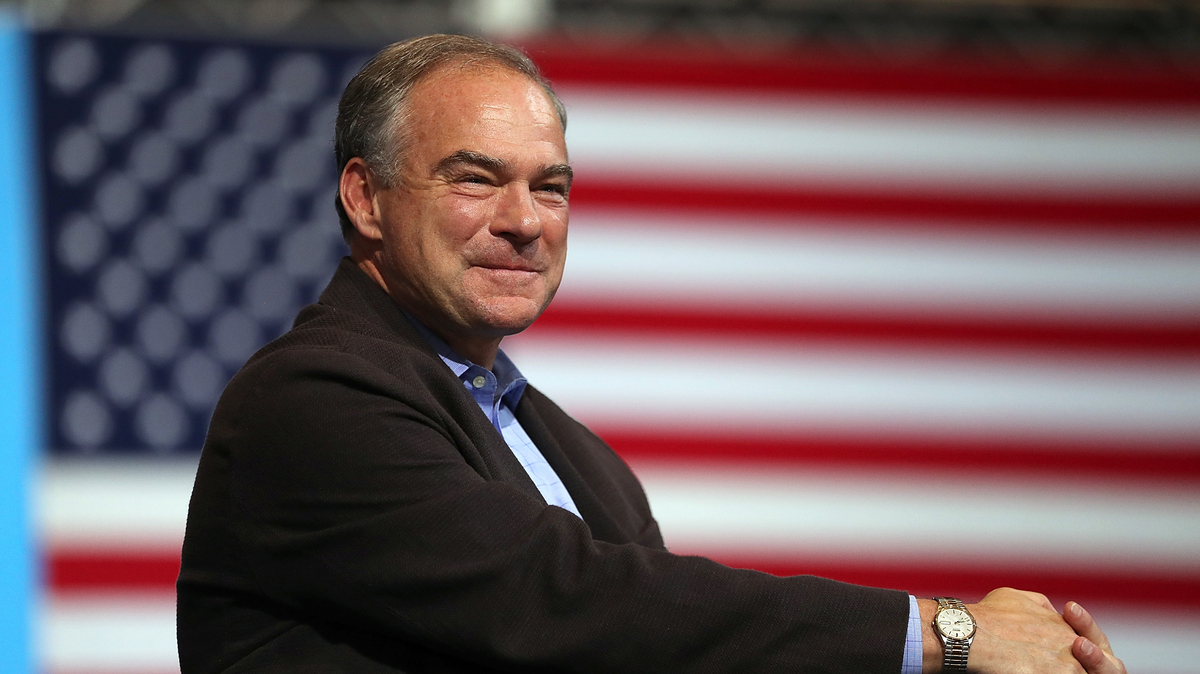 After a heated first debate between Hillary Clinton and Donald Trump became the most-watched presidential debate in history last week, it's now time for the two vice presidential picks to take the stage.

Vice presidential picks don't typically receive as much attention as the people at the top of the ticket. And while they campaign nearly as energetically as their more prominent counterparts, Kaine and Pence remain relatively unknown to many voters.

On the Democratic side, Tim Kaine is a political veteran who has served at nearly every level of government. He's a former chairman of the Democratic National Committee and has been a mayor, governor, and senator. President Obama nearly picked him in 2008, but this time he got the job. He has been seen as a safe choice in an anything-but-traditional election year.

Kaine himself joked about his scandal-free background on Meet The Press in June, saying, "I am boring ... but boring is the fastest-growing demographic in this country."

Here's what you need to know about the Virginia senator going into the vice presidential debate.

1. He has never lost an election.

Kaine started out as a lawyer in Richmond, Va., where he spent years suing landlords for discrimination against African-Americans, but his political career began on the Richmond City Council in 1994. He was later elected by the council to be the city's mayor. In 2001, Kaine was elected as Virginia's lieutenant governor and in 2005 he won election as governor. He ran for the U.S. Senate in 2012.

Kaine's rise through the political world has been steady and, in some cases, with a hint of luck: He won his Senate seat four years ago when incumbent Jim Webb, a first-term senator, did not seek re-election. Kaine got the Democratic Party's nomination after no other Democrats filed to run.

2. He is fluent in Spanish.

Kaine learned Spanish while living in Honduras in 1980 during a year off from law school. He worked at a technical school with Jesuit missionaries.

In 2013, Kaine spoke in Spanish for almost 13 minutes on the Senate floor advocating for an immigration bill crafted by the bipartisan "Gang of Eight."

It marked the first time a senator gave a speech on the floor in a language that was not English, although others have spoken briefly in Spanish before.

In the speech, Kaine said he felt it was appropriate to speak in his second language because Spanish is "spoken by more than 40 million Americans with a huge investment in the result of this debate."

On the campaign trail, Kaine has been teaching crowds how to say "Ready for Hillary" in Spanish.

3. He is an avid supporter of gun control.

Like his running mate, Kaine supports expanded gun control legislation, having served as Virginia's governor during the 2007 mass shooting at Virginia Tech. In June, Kaine held the floor with other Senate Democrats for 15 hours to advocate for gun control legislation. On the floor, he spoke of his experience in the aftermath of the shooting:

"That was the worst day of my life, and it will always be the worst day of my life — comforting the families of the victims, talking to the first responders who went into a classroom where bodies littered the floor and who heard in the pockets of deceased students and professors cell phones ringing as parents who had seen it on the news were calling their kids, just knowing they were at Virginia Tech to ask them if they were all right — calls that would never be answered."

Although a gun owner himself, he has said he supports "common sense legislation" to expand background checks, restrict assault-style weapons and expand mental health services.

4. He has focused his time in Congress on the military

Kaine son's is an active-duty Marine, which makes Kaine one of just a few members of Congress who have a child serving in the military.

In 2014, Kaine met with Virginia veterans at a momentous time in his son's military career, according to the Culpeper Star Exponent. "My son is an infantry officer who takes control of his first platoon Monday so these are issues that matter to me personally," he said.

Where Tim Kaine And Hillary Clinton Stand On Key Issues

Kaine has focused on military and foreign policy in Congress, serving on the Senate Armed Services Committee. In an interview on MSNBC's Morning Joe, Kaine attacked Trump for criticizing the military.

"When I hear Donald Trump say the American military is a disaster, I want to go through the screen and shake the guy," Kaine said in the interview. "We ought to have a commander in chief who talks about our troops with respect and gratitude."

As NPR has reported, the original law authorizing military force was signed in 2001 and gave the president the power to use force against groups which aided the September 11 attacks, not terrorists in general.

That's a point where Clinton and Kaine disagree. During a November debate on CBS, when asked whether she would declare war on ISIS, Clinton said the U.S. already has "an authorization to use military force against terrorists" that we passed after 9/11. When asked if that covers ISIS, she said yes: "It certainly does cover it."

5. He considers himself a traditional Catholic

Kaine has called himself a "traditional Catholic," and says he personally opposes abortion. However, the senator said in a June Meet The Press interview that he doesn't let his personal beliefs affect his position on the issue. He said he believes the decision of whether or not to have an abortion shouldn't be dictated by the government:

"I deeply believe, and not just as a matter of politics, but even as a matter of morality, that matters about reproduction and intimacy and relationships and contraception are in the personal realm. They're moral decisions for individuals to make for themselves. And the last thing we need is government intruding into those personal decisions."

In August 2015, Kaine voted against defunding Planned Parenthood. In a statement at the time, he said that for many women, "Planned Parenthood health centers are their only source of high quality health care."

...And he plays the harmonica.

Kaine is a self-professed "harmonica enthusiast." He has played the instrument for over two decades, according to Roll Call, and has been known to make appearances with it on and off the campaign trail.

In an interview with the Washington Post, Kaine joked that his harmonica is actually a safety net. "In politics you've got to have a fallback in our line of work because your career can be over in an instant," Kaine told the Post. "Not that I would make much money playing a harmonica."

But he also told the Post that he's not very good.

"I've had people comment less than favorably on my quality. My wife is the most honest," Kaine said. "She says, 'Hey, you ought to play anytime they ask you because as soon as you're not in elected office, they're not going to ask you anymore.'"