Accessibility links
Roger Ailes' Unparalleled Impact On The Public Sphere No contemporary figure has done more to shape the intersection of American media and politics than Roger Ailes. He was forced out of Fox News this week following allegations of sexual harassment. 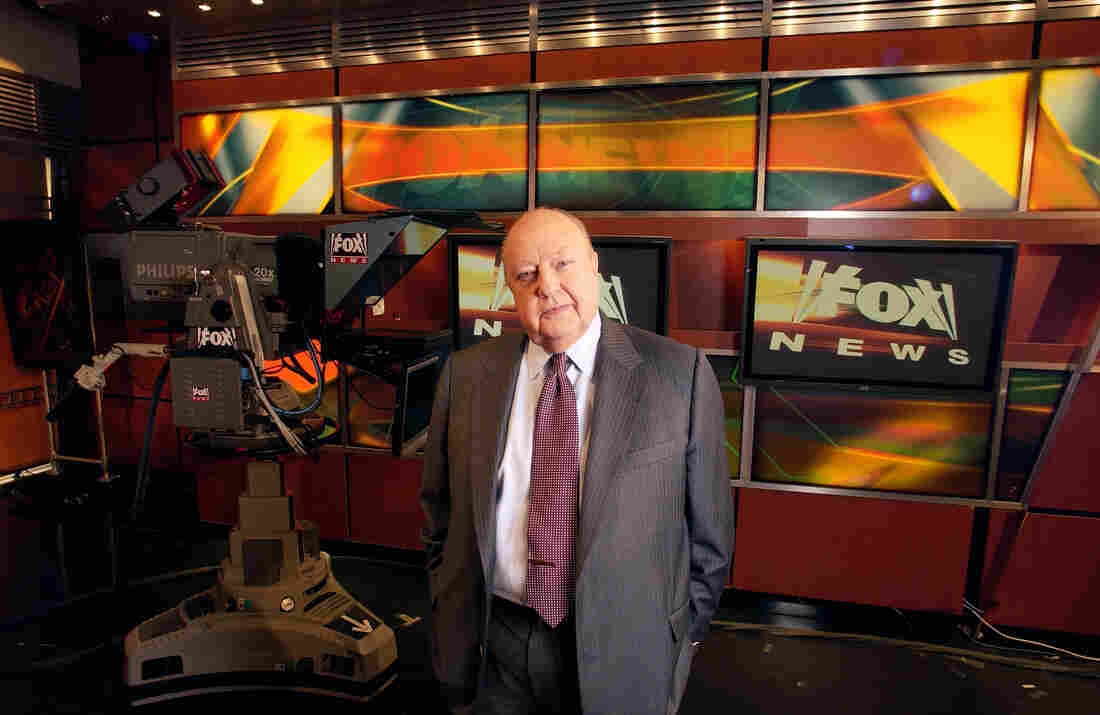 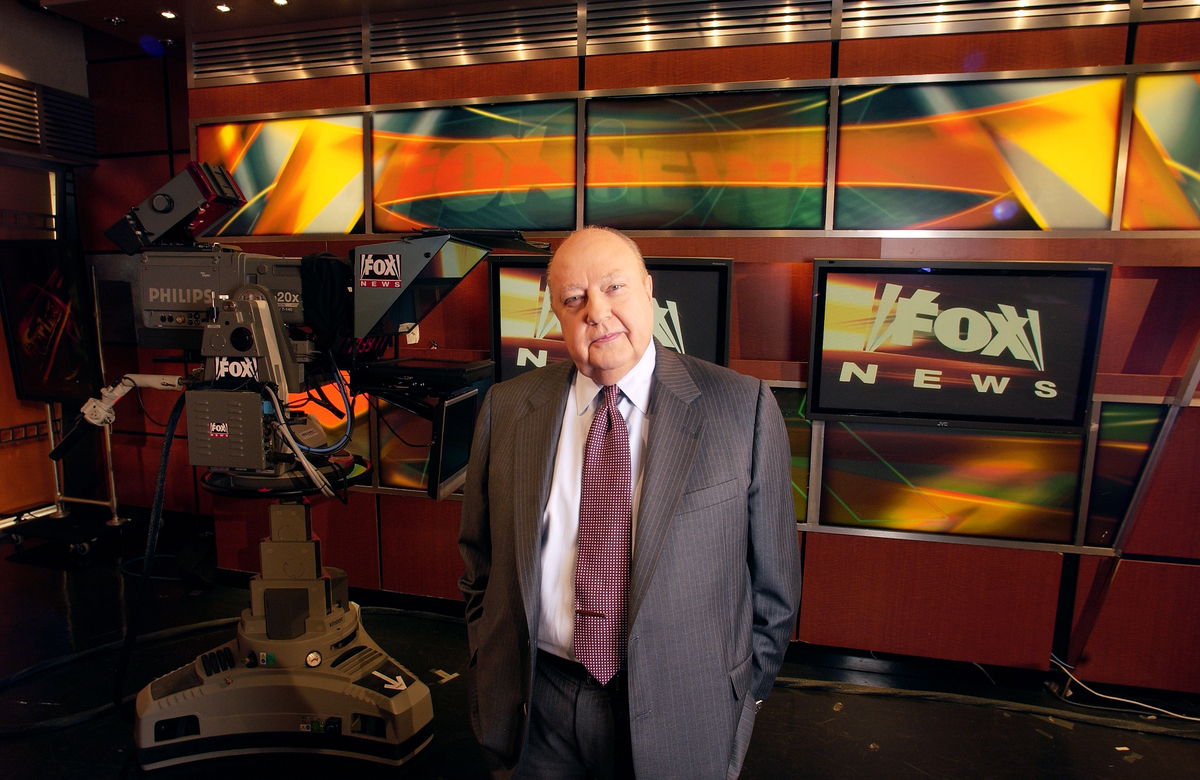 The news that sexual harassment allegations have cost Roger Ailes his job threatens to obscure Ailes' singular career and his almost unrivaled influence in the public sphere.

But no contemporary figure has done more to shape the intersection of American media and politics than Ailes, who, until Thursday, had been the Fox News chief since its very first day on the air in 1996.

In his long career, Ailes advised a succession of Republican presidents on how to gain power and maintain it — both on their payrolls and off the books.

He showed how to bring flair and flash to financial coverage as president of CNBC.

Then Ailes gave a turbo boost to the Republican movement in the mid-1990s, just in time to fuel opposition to the Clinton White House, with the creation of Fox News. It was a partnership and mind meld between Ailes and his new patron, media magnate Rupert Murdoch.

Roger Ailes, Accused Of Sexual Harassment, Out As Chairman Of Fox News

Fred Barnes, executive editor of The Weekly Standard and a familiar figure on Fox News, told me the new network gave conservatives hope.

"They were so used to thinking that the media was completely barren as far as they were concerned," Barnes said. "There was nothing there for them. It was all for liberals. And then Fox comes along — and they really glommed on it."

Fox served as the home of debate within the conservative movement. At its default setting, Fox blended pugilistic, right-of-center populism, resentment of changing demographics and sexual mores, and a strong nationalistic tone.

Fox News' success also drove television news as a whole more toward conflict, given its emphasis on assertion over reporting.

From Entertainment To Politics

Fred Barnes spoke to me outside the arena for the Republican National Convention in Cleveland. It was perhaps fitting that the end game for Ailes played out as Republicans gathered there.

Ailes, an Ohio native, enjoyed his first big professional success in Cleveland, as a producer of a local variety and talk program called The Mike Douglas Show.

In time, the show went national. So did Ailes.

After Richard Nixon appeared on the show during the 1968 campaign, Ailes gave the candidate some advice: use televised appearances to go around the press and interact with voters. More to the point, be seen interacting with voters. 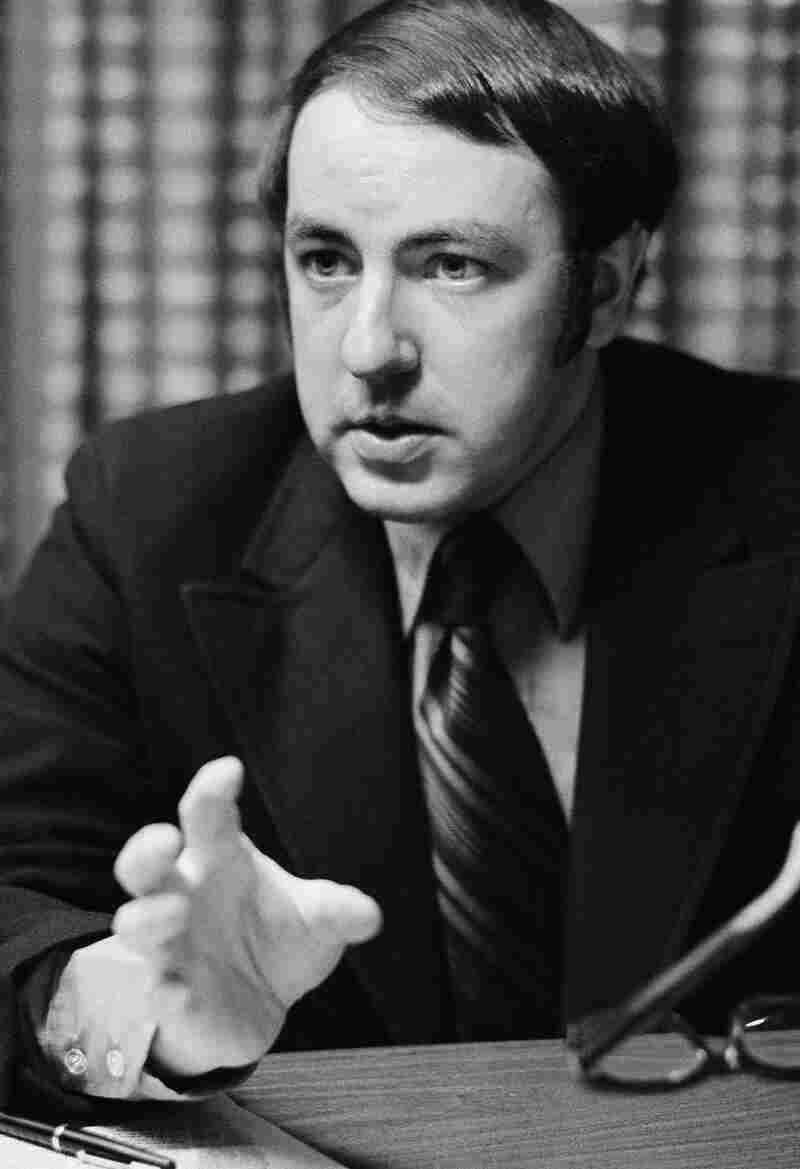 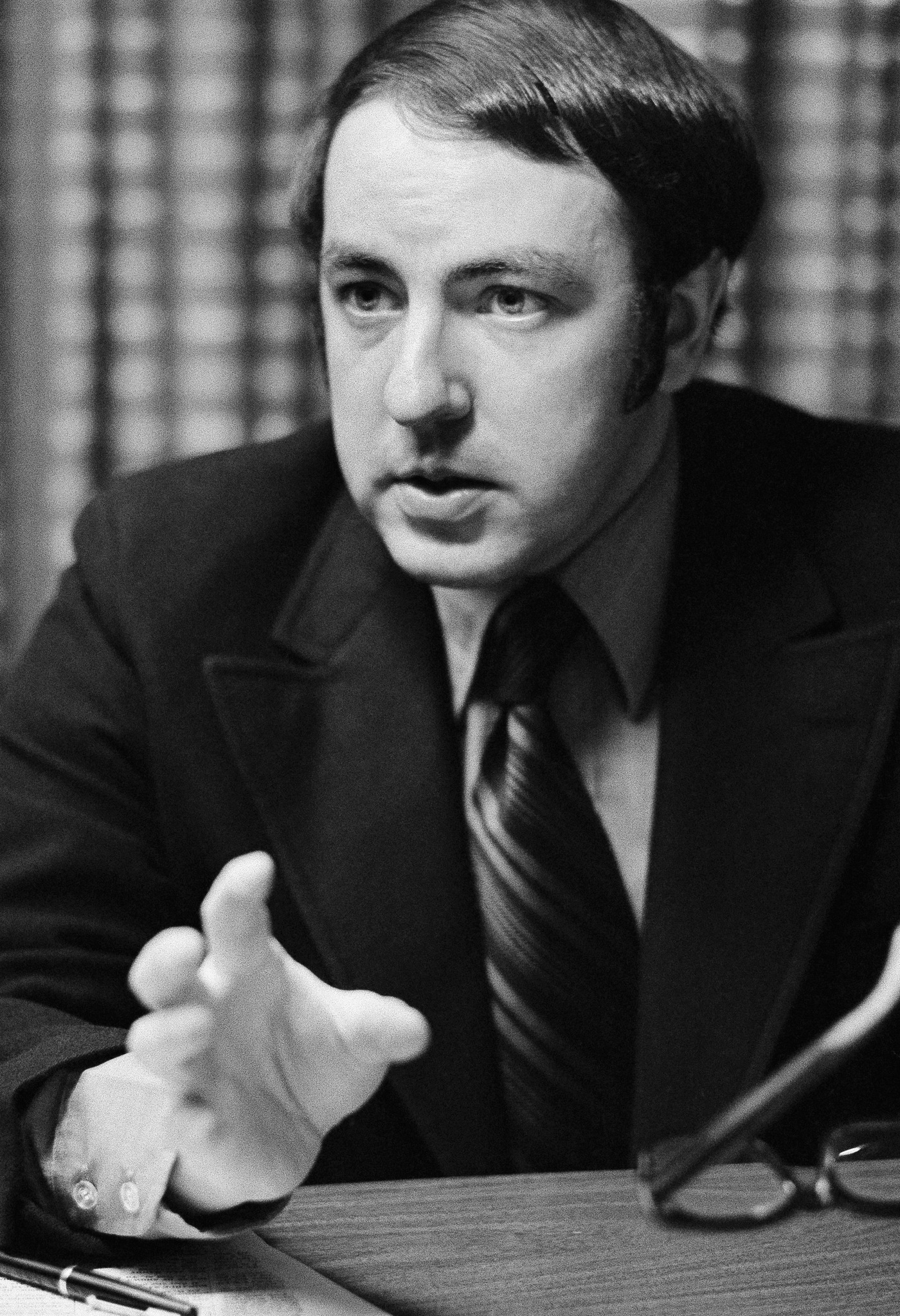 Roger Ailes was a political consultant in 1971, advising many leading Republicans, including Ronald Reagan, George H.W. Bush and Karl Rove.

In one such encounter, former college football coach Bud Wilkinson, a Nixon fan and friend, served as moderator. "No one has any idea what questions will be asked," Wilkinson told viewers. "Mr. Nixon cannot possibly know. His answers must be immediate and direct — and our panel is representative."

In reality, the panelists were pretty carefully screened.

Ailes ended up advising the Nixon White House. He also rose to be executive producer of The Mike Douglas Show, which lasted for thousands of episodes. Ailes dabbled in Broadway, producing two shows, including The Hot l Baltimore.

Reagan dominated the second debate with remarks that became political legend. Pressed on his age, for example, Reagan said, "I will not make age an issue of this campaign. I am not going to exploit for political purposes my opponent's youth and inexperience." Reagan never looked back.

Ailes kept toggling between producing television specials and serving as a political consultant, sometimes doing both at once.

In 1988, Ailes played a key role in George H.W. Bush's White House bid. A climactic moment arrived early that year. Ailes warned Bush that CBS News anchor Dan Rather was primed to go after him on the Iran-Contra scandal during a live interview. The conversation turned testy.

Bush ordinarily displayed a patrician reserve. Ailes goaded Bush to rumble. When pressed by Rather, the vice president roared back, "It's not fair to judge my whole career by a rehash on Iran. How would you like it if I judged your career by those seven minutes when you walked off the set in New York?"

Bush was jabbing Rather over a 1987 incident in which the network delayed the start of CBS Evening News to carry the end of a U.S. Open tennis match. Rather, infuriated, walked off the set (on location in Miami, not New York). When the match ended, the network went black for more than six minutes before Rather returned.

That year, Ailes published the book, You Are the Message, a primer on how candidates and corporate executives should communicate with the public. He proceeded to manage several unsuccessful Republican campaigns, starting with Rudy Giuliani's first mayoral bid in New York City in 1989.

Ailes left politics once more, though hardly definitively. He produced Rush Limbaugh's radio show and then joined CNBC to build it up into a recognizable version of what the channel is today.

The Era Of Fox News

He later jumped at the chance to run Rupert Murdoch's Fox News — defined as an alternative to the liberal media at its launch in fall 1996. 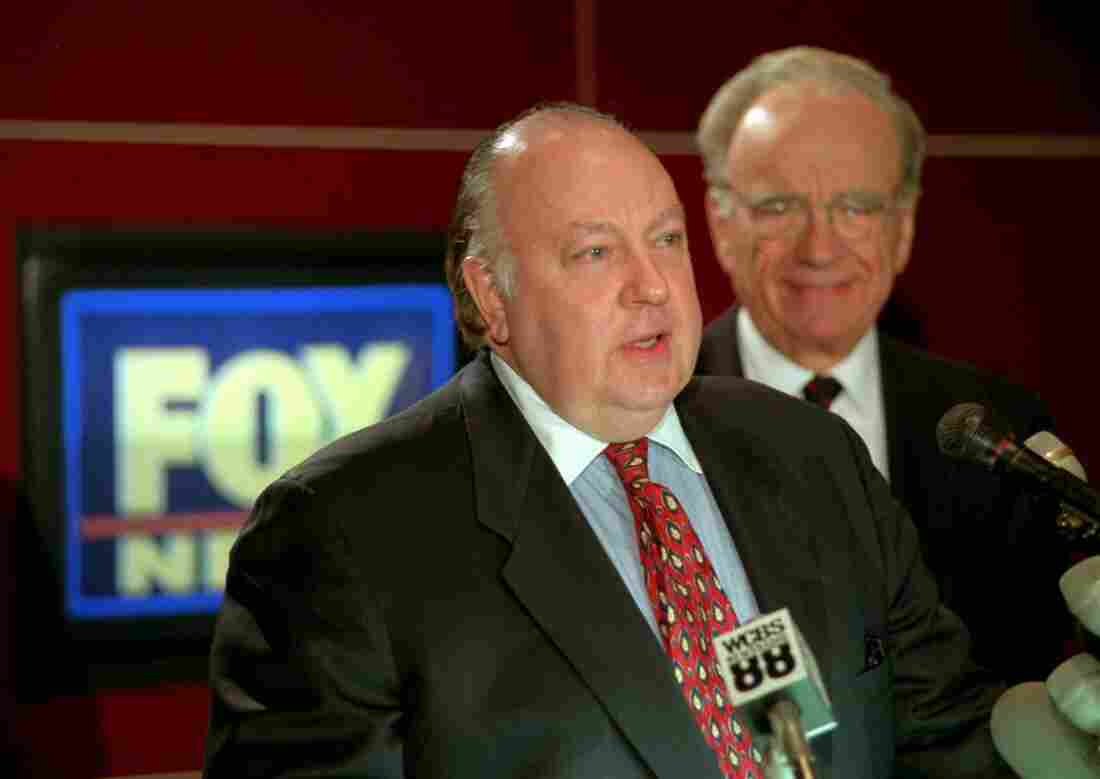 Roger Ailes (left) speaks at a news conference with Rupert Murdoch in January 1996 after it was announced Ailes would be chairman and CEO of Fox News. Richard Drew/AP hide caption 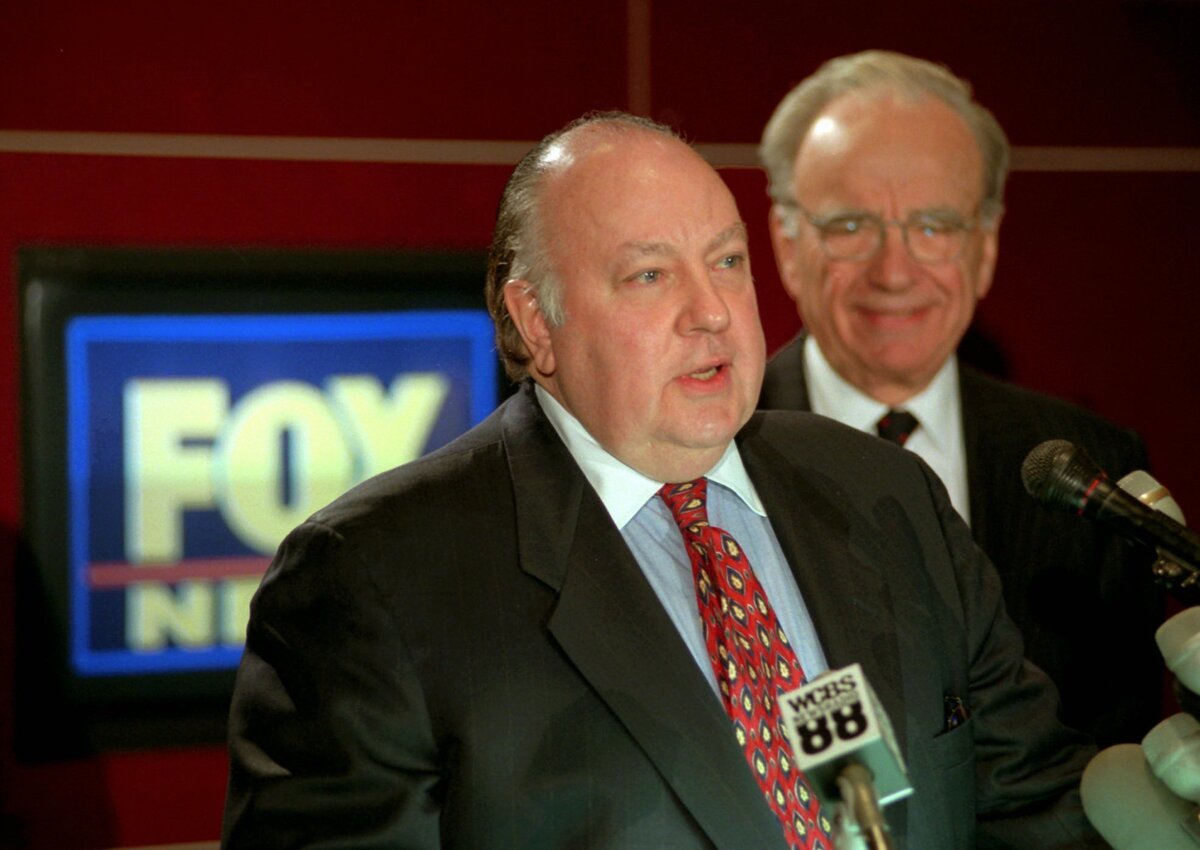 Roger Ailes (left) speaks at a news conference with Rupert Murdoch in January 1996 after it was announced Ailes would be chairman and CEO of Fox News.

Fox built up momentum during the impeachment process of President Bill Clinton and then surged after the disputed 2000 presidential election and the September 2001 terrorist attacks.

The channel draped itself in patriotism — a constant Ailes refrain. Fox would become the top-rated cable news channel and has remained so ever since.

"At Fox, everything is due to Roger," Fred Barnes said. "It was entirely his vision. And what he created — one guy creating that. I'm still amazed."

News reports were often straight ahead. But common themes cropped up on the opinion shows, including some racial undercurrents.

In a 2009 appearance on Fox & Friends, Glenn Beck, who at the time hosted his own show on Fox, said of President Obama, "This president, I think, has exposed himself as a guy over and over and over again who has a deep-seated hatred for white people or the white culture."

Ultimately Beck's conspiracy-driven rhetoric and his belief that his star shined brighter than the network's was too much for even Ailes, who did not renew Beck's contract.

In 2012, he personally encouraged New Jersey Gov. Chris Christie to run against Obama and sent an emissary to Afghanistan to try to coax Gen. David Petraeus into the race. (That secret mission, carried out by a Fox News national security analyst, was taped.)

Ailes had put many of the candidates in the past few cycles on the Fox payroll; John Kasich and Mike Huckabee used to be Fox News hosts, while Rick Santorum, Newt Gingrich and Ben Carson had all been paid Fox News commentators. 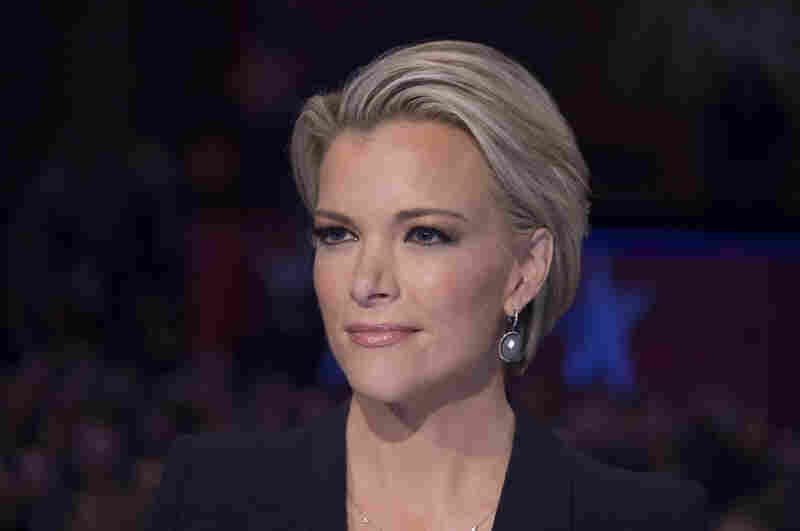 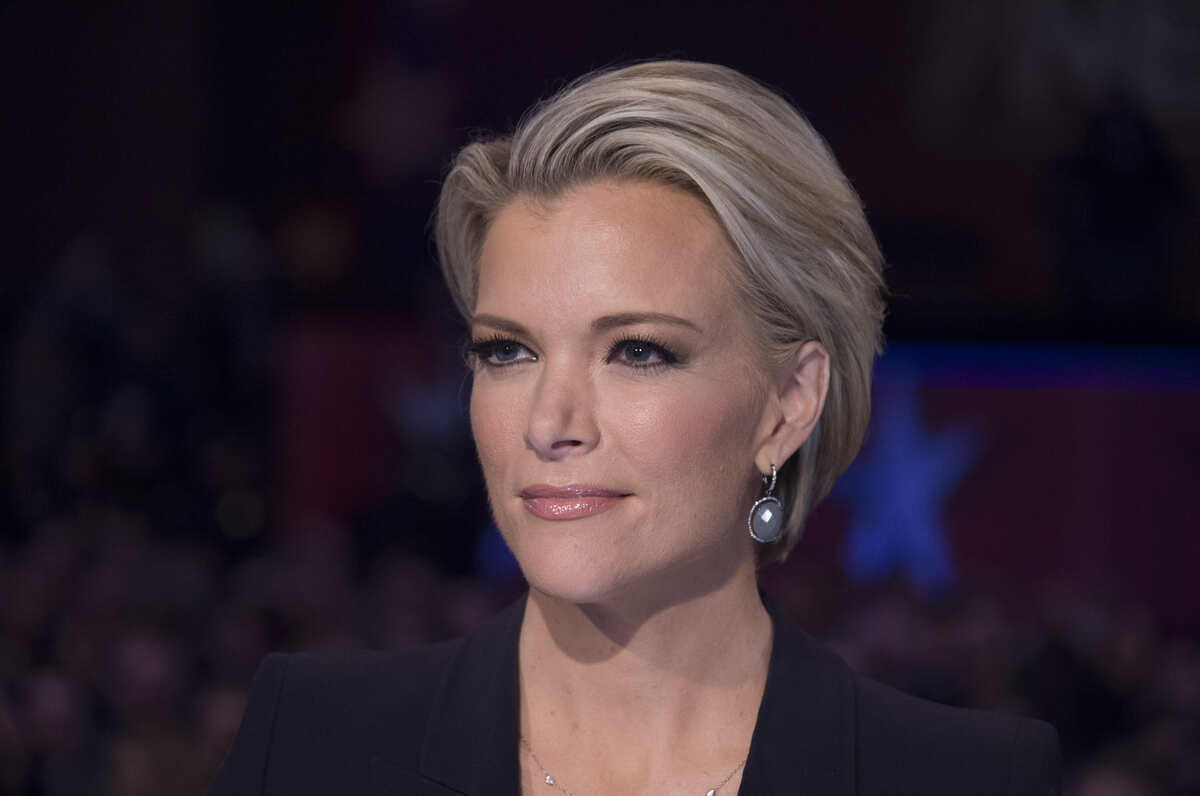 After the debate, Trump attacked Kelly and Fox News and appeared repeatedly on rival networks, driving up their ratings.

The Obsessions Of Roger Ailes

One of Ailes' former executives once told me you just had to watch Fox to understand his obsessions.

The channel was drenched in stories about sex.

Female presenters on Fox were often overtly sexualized. They were steered to wear revealing outfits, while cameras lingered over their legs.

The morning show Fox & Friends, a peppy mix of fraternity humor, gossip and conservative chat, was a particular source of charged banter.

Gretchen Carlson had been a co-host on the show for years. She filed suit earlier this month alleging that Ailes had demoted her to an early afternoon show several years ago, cutting her pay, as a result of her complaints of sexism on the set. He then proceeded to make increasingly plain sexual advances, according to her suit. 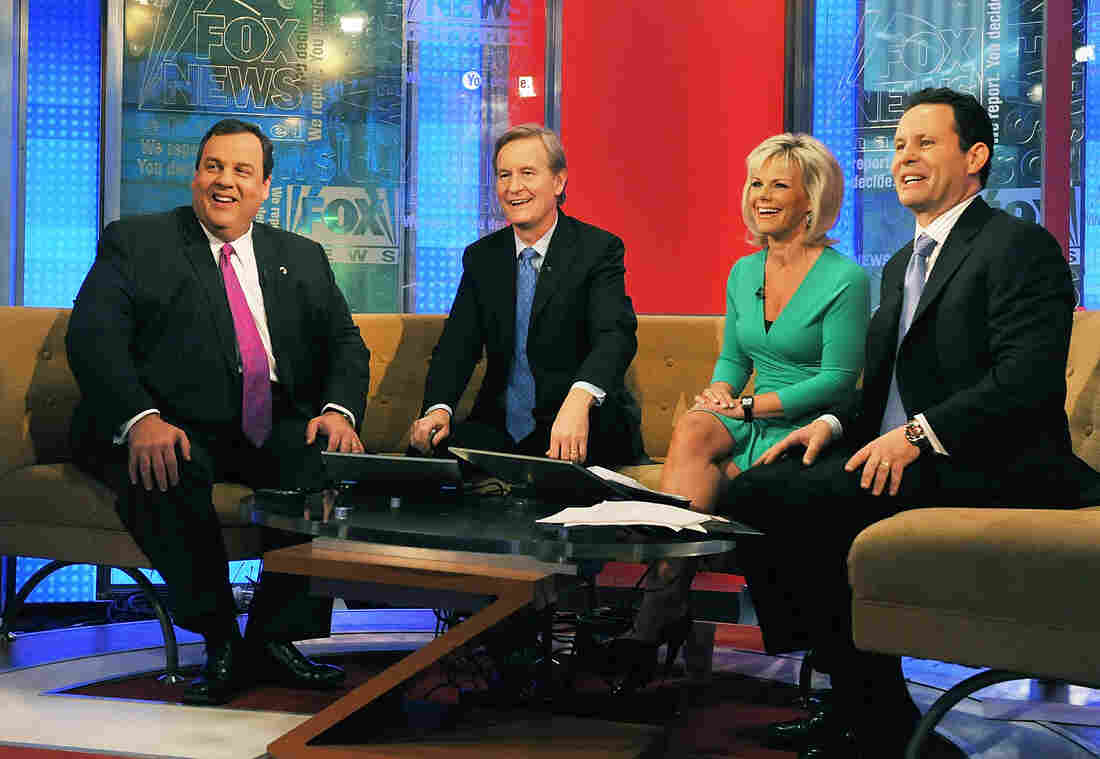 New Jersey Gov. Chris Christie appears on Fox & Friends with co-anchors Steve Doocy, Gretchen Carlson and Brian Kilmeade in 2011. Carlson filed suit earlier this month alleging that Ailes had demoted her to an early afternoon show several years ago, cutting her pay, as a result of her complaints of sexism on the set. Slaven Vlasic/Getty Images hide caption 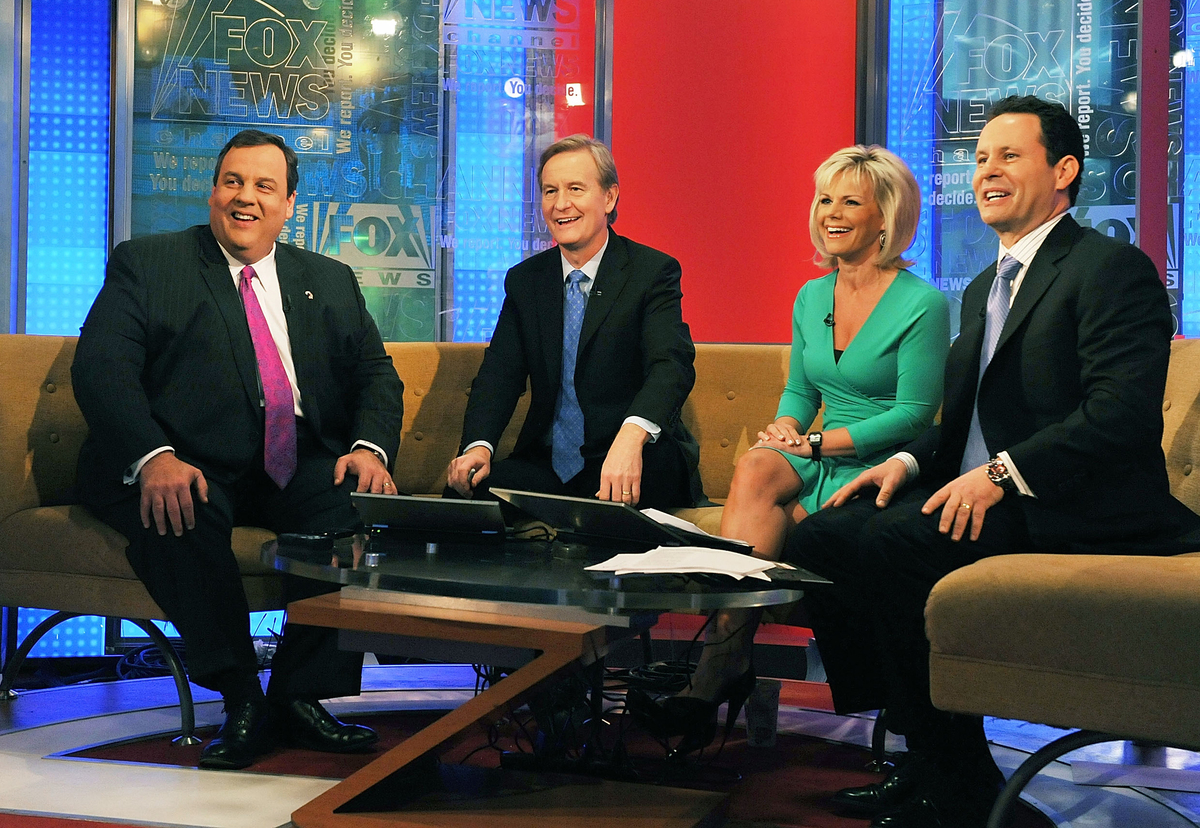 New Jersey Gov. Chris Christie appears on Fox & Friends with co-anchors Steve Doocy, Gretchen Carlson and Brian Kilmeade in 2011. Carlson filed suit earlier this month alleging that Ailes had demoted her to an early afternoon show several years ago, cutting her pay, as a result of her complaints of sexism on the set.

Some anchors and hosts defended Ailes, including some women, in what appeared to be a coordinated effort.

Megyn Kelly, by contrast, held back from public comment and cooperated with an inquiry set up by parent company 21st Century Fox. She reportedly told the law firm Paul, Weiss, Rifkind, Wharton and Garrison — which was conducting the inquiry — that Ailes had harassed her, too, when she was a young reporter in the network's Washington bureau. Others have also come forward.

Ailes' management style knit together fierce loyalty and paranoia. Many Fox News journalists have told me of their deep fears of offending Ailes, including one who, like Carlson, says she was sexually harassed by him in recent years.

One way such loyalty can be enforced: Ailes' PR department has peddled negative stories about colleagues who fell out of favor. In one instance, a publicist successfully planted a story in the Washington Post depicting then-anchor Laurie Dhue as drunk at a black-tie affair; after leaving the network, she acknowledged she was an alcoholic. Her lawyer said Thursday she, too, is writing a book about her interactions with Ailes and others at Fox.

Ailes is receiving a severance package in the tens of millions of dollars, though he will remain an adviser to Rupert Murdoch. Murdoch will oversee the network in the short term.

Carlson's attorney, Nancy Erika Smith, tells me the payment of such an astonishing sum to get Ailes to resign falls short given all the accusations against him.

Until Carlson's lawsuit, Ailes' charisma, his accomplishments and his stature held sway.