Accessibility links
National Republican Convention 2016: Union Of Donald Trump And GOP Cemented Trump's speech was studded with statistics that had fact-checkers working feverishly into the wee hours — often finding numbers to be distorted or downright specious. But it didn't seem to matter. 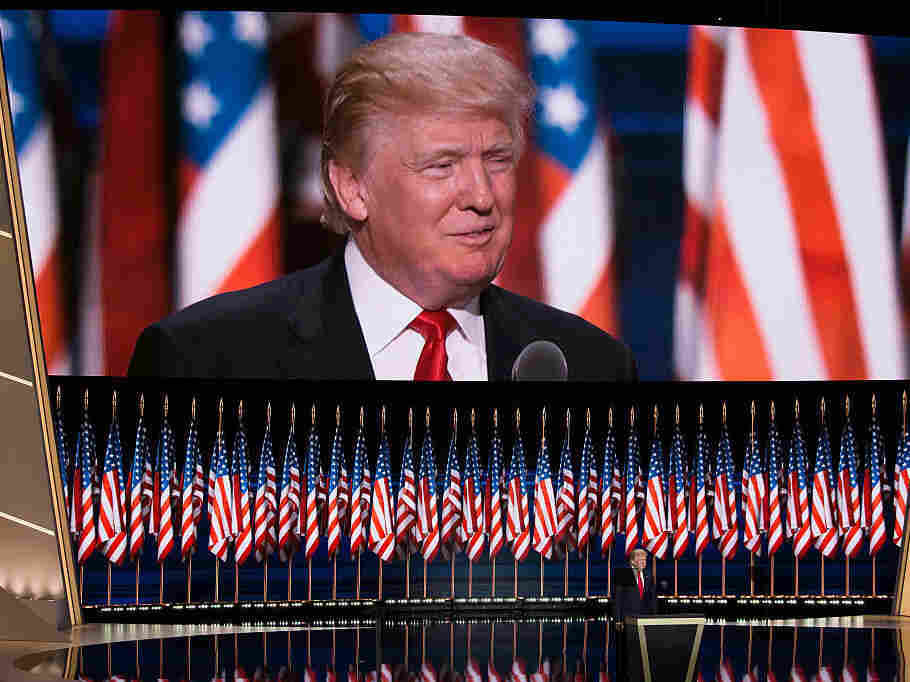 Donald Trump accepted the Republican nomination for president on Thursday, the fourth day of the Republican National Convention, at the Quicken Loans Arena in Cleveland. Tasos Katopodis/Getty Images hide caption 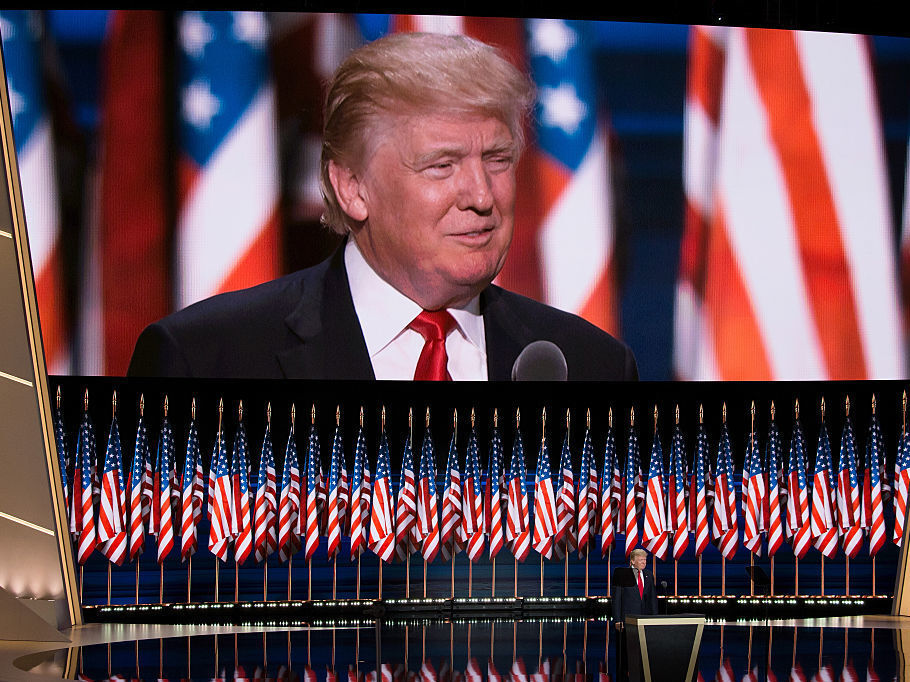 Donald Trump accepted the Republican nomination for president on Thursday, the fourth day of the Republican National Convention, at the Quicken Loans Arena in Cleveland.

It has been said that "to cleave" is the only verb in English that connotes one specific action and its direct opposite. To cleave sometimes means to hold together, and it can also mean to split apart.

That's why Cleveland was the perfect city to host the 2016 Republican National Convention. Because this week, in this town, the GOP demonstrated both its persistent divisions and its instinct for overcoming them.

The bottom-line result of four nights in the Quicken Loans Arena was the consummation of the party's union with Donald J. Trump, its new master and presidential champion. The coming together was never going to be easy or smooth. It was a match made not in heaven, but in the hot flames of the party's debates, primaries and caucuses.

Trump emerged from that crucible with 14 million votes, a fact with which he began his acceptance speech on Thursday night. It was more than any Republican contender in history, a fact that Trump also happened to mention.

Trump then reviewed the greatest hits from his campaign rally speeches, but in an LP format. He took the stage a little after 10:15 p.m. and spoke until about 11:30. C-SPAN clocked it at 73 minutes and said it was the longest since at least 1972.

And although most of his delegates and other fans in the arena kept standing and cheering on cue, a growing minority sat and clapped sporadically. For many, it had been a long week.

On Monday, the night to "Make America Safe Again," the delegates heard from many speakers about the horrors of crime and terrorism and illegal immigration. A speech by the candidate's wife was a welcome departure from the doom and gloom, but it was marred by the realization that a portion of her remarks had been lifted from Michelle Obama's 2008 convention speech.

On Tuesday, the night to "Make America Work Again" was one in which Hillary Clinton was taken to task for all that has gone wrong in the world of late and for using a private server for her emails.

On Wednesday, the night to "Make America First Again," all the programming was upstaged by former rival Ted Cruz's speech and non-endorsement of the convention's hero and nominee. The crowd erupted in jeers and booing, and the party was plunged into convulsions of disagreement and dismay. Cruz's fate is now the liveliest topic of debate on the right: Did he hurt himself or position himself to pick up the pieces in a post-Trump GOP?

On Thursday night, the skies seemed to clear and admit more light on the proceedings. A series of speakers highlighted the diversity within the party, especially regarding social issues. Peter Thiel, an entrepreneur who co-founded PayPal, exhorted the party to accept gays and lesbians. Trump himself later pledged to protect the LGBTQ community from terrorists and sharia, and when the delegates cheered he thanked them for cheering that stance.

Perhaps the most effective introduction of the entire week was provided on the last night by Ivanka Trump. The candidate's oldest daughter, and perhaps most perfect advocate, paid tribute to her parent, of course. But she also spoke up for equal pay for women and other causes that might have found a home on next week's Democratic convention program. She also held out the prospect that women, social liberals and young people in general might still warm up to her father.

It was as though Team Trump, after several nights of wrestling with the rough beast that is a national convention, simplified the game plan to family members, close friends and, of course, The Donald himself.

They ran the play that had brought them to the Super Bowl. They handed the ball to the big guy and let him run with it. And run with it.

Trump's speech was passionate and filled with promises. It was delivered with the intensity and energy and often-shouting delivery that has been Trump's trademark.

It was studded with statistics on crime and other forms of social pathology that had fact-checkers for media organizations working feverishly into the wee hours — often finding the Trump numbers distorted or downright specious. But it did not seem to matter in the arena on Thursday night, especially when Trump was on a roll and his crowd was mostly rocking along with him.

Much of the speech might be said to have been inspired by Richard Nixon's acceptance speech in 1968. Nixon, at the time, cataloged the current ills of the nation — Vietnam, riots in the urban core, crime, disrespect for authority — and laid them all at the feet of Lyndon Johnson, who had been president since 1963.

Here in Cleveland, Trump repeated a similar litany that re-created Nixon's dark canvass. Then he blamed it all on Clinton, adding that he was sure President Obama was deeply sorry he had appointed her secretary of state.

It probably does not matter that the president will say very much the opposite about her next week when Clinton is nominated by the Democrats in Philadelphia. In the world depicted in a Trump speech, fantastic assertions are far from an aberration.

For example, Trump repeatedly promised to solve the nation's and the world's thorniest problems quickly — perhaps even immediately. When inaugurated on Jan. 20, 2017, Americans would feel safe again. Right away.

ISIS would be defeated, "and very, very quickly." Trade deals would be ripped up and renegotiated, and billions would flow into America to create jobs, rebuild bridges and roads and create the railroads of tomorrow. Coal mining and steelmaking would return as vibrant industries to employ all their old workers and more. And, of course, an immense wall would be built across the entire border with Mexico — a feature of the Trump campaign from its outset.

Refusing to back down from his controversial remarks to The New York Times about NATO, Trump said he wanted the alliance to reorient itself toward terrorism. He said he would not defend any of its 28 members unless they spent 2 percent of their own national budgets on defense. He did not say anything about his earlier threats not to honor the 67-year-old commitment the U.S. has to defend any NATO country against an attack from Russia or another aggressor.

All this was received in the Q arena with loud approval and enthusiasm, but not necessarily from every delegate or delegation. Reaction to Trump in some states and groups of Republicans remains guarded.

In fact, since becoming the presumptive nominee in May, Trump has struggled to wear the mantle. His shifting cast of campaign staffers and advisers have wrestled with ways to adapt him to his new role, and to condition the party to its new leader.

They have ventured belatedly into fundraising and conducted an almost diffident search for a running mate. They have labored to line up endorsements, and they have fought to restrain the impulses of the candidate himself.

This week in Cleveland, Team Trump was deserted by many of the party's big names, including both its living ex-presidents and its presidential nominees from six of the past seven conventions. Only the aging Bob Dole, the losing nominee in 1996, showed up; and he was not hale enough to address the convention.

In their place, Team Trump brought in various C-list celebrities, sitcom and soap opera actors and the head of the Ultimate Fighting Championship.

In an effort to overcome the lack of diversity among the delegates, several high-profile and outspoken African-Americans were brought to the podium, including fiery preacher Mark Burns of South Carolina and hard-liner David Clarke, the sheriff of Milwaukee County in Wisconsin.

And so it went, a nightly contest between the needs of the party and the drives and desires of Team Trump. Ultimately, after three nights of near-miss and near-debacle, everyone seemed to get together on the final night.

In this basketball arena, with the logo of the NBA champion Cleveland Cavaliers looming overhead, it was worth remembering that the fourth-quarter score is the only one that matters.